Archive for the tag “MoTWA”

Bosco, it isn’t UTB fault Tourists sway away, its yours actually! 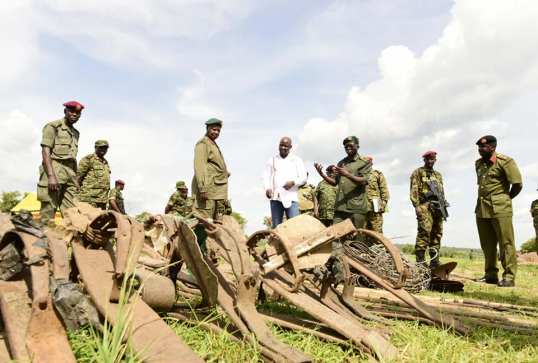 If it was a different world, the Republic of Uganda could have been a haven for tourists and tourism. Where the wealth could have been generated and also shown the magnificent republic, which it is. It being the beautiful Kabale, the green valleys of Ibanda, the National Parks, the historical town of Jinja or bursting bubble of Capital City of Kampala. That is just for starters. However, the ruining this image isn’t Uganda Tourism Board (UTB), that is what the National Resistance Movement has done with the use of the army to quell riots, to meet opposition politicians and even lack of possible political associations without being arrested. This are the memo’s that get to the tourists.

They know that insecurity, the extra-judicial killings and the lack of trust between the state and its citizens are getting the world on worry. That scares away citizens, as well as the hardships against the Forum for Democratic Change and their Defiance Campaign, while now also using the army every time Robert Kyagulanyi aka Bobi Wine. These sort of activity will not make the Republic more marketable. As people are worried if these sort of activity will interfering in their vacation hot-spots and make their peaceful existence turned into a war-zone with road-blocks, soldiers on posts and possible police brutality as they visit Mengo or even The Square in Kampala.

“The president said Uganda has a lot of potential from its natural resources but there is a general lack of efficient marketing which falls directly under UTB. “The UTB has not been doing a good job, I don’t know why. You find other countries Which have nothing to show, attracting more tourists. Therefore, that area of promotion is still weak. If you hired me as promoter for just six months you will see the results,” he said. “The UTB and our embassies should market our country’s uniqueness. We must work towards increasing the numbers of tourists visiting Uganda from the current two million annually,” he added” (Nelson Bwire Kapo – ‘Uganda Tourism Board doing a bad job at promoting Uganda- Museveni’ (30.09.2018, link: http://nilepost.co.ug/2018/09/30/uganda-tourism-board-doing-a-bad-job-at-promoting-uganda-museveni/).

If the President and Bosco wanted it to be great tourist destination, why has the roads and the transport infrastructure been not invested properly in, as these projects are big borrowing operations, where the money has gone into cronies pockets instead of road-quality. Neither has there been well thought of planning of transport between the regions or towns. As there is hectic ways of traveling for the ones who doesn’t know or cannot afford to use specials across the Republic. Therefore, the expensive transport across from Entebbe to a National Park is huge cost for anyone. It doesn’t help with posters by Clear Channel across Europe, if it cost a dozens of bobs to travel and plan to do so.

The UTB is not in-charge of insecurity and the state of affairs. It is not their campaigns or their motivations fault for the situation on the ground. That is all Bosco, as he is the head and has run the Nation for so long. He should take charge and take blame. That would be new for him, because he always blames and says other people are not doing their job.

First. Generate trust abroad, than the people might come. If they know its safe and reads more positive stories. But the tourists will not come there, if the Entebbe International Airport is known for being the place, where the opposition leaders are arrested and detained after arriving. That is what the world knows now. Bosco has ordered this and his trying to destroy opposition is known. The torture and the preventative arrests is known. That is why people fear Uganda. They know that Bosco is a vindictive President, without any other cause, than promoting himself.

That is why this isn’t UTB fault. It is the NRM and Bosco’s fault, who has played this all wrong. He has neither made it easier to be tourist or gained their trust. That is why they pick other destinations like Botswana or Kenya for similar activity and safaris. Peace.

Revealed: The Ministry of Tourism, Wildlife and Antiques in Uganda have not appointed needed boards for their agencies!

The Ministry of Tourism, Wildlife and Antiques came to sort of revelation in Parliament, that shows the lack of governance and institutionalism that is too common in the Republic of Uganda. That the National Resistance Movement has established agencies under the ministry, but have no-one running them. They have not even appointed boards or even have procedures to select the appointments to them. What a special event. Just take a brief look at the assessment that the Parliament Watch describes from the session today!

“The Committee on tourism trade and Industry has learnt that the different agencies under the Ministry of Tourism, Wildlife and Antiquities have no Boards. For example, Uganda Tourism Board, Wildlife Education Centre, Uganda Hotel, Tourism and Training Institute. Members have urged the Minister to inform the Prime Minister and the President in the next Cabinet meeting that the Committee will not consider the budget unless the Boards are instituted by the Ministry. Committee observed that it is a deliberate move to control agencies through the line ministry” (Parliament Watch, 25.04.2017).

A definition of a board from Meriam Webster says this: “a group of persons having managerial, supervisory, investigatory, or advisory powers” (Meriam Webster – Definition of board). So the ministry do not at the current state have the capacity to involve people to have a managerial or a supervisory role over agencies beneath themselves. That must be the true definition of steady progress, as state affairs goes, aye?

Like Uganda Tourism Board was already established by 1994. So the NRM has had the time to handpick the men and woman fit for the works and roles, still they have none. So the one agency involved in marketing and promoting the republic as a travelling destination does not have a board. Even the web-page of UTB says this: “The Minister of Tourism Wildlife and Antiquities, appoints the Board of Directors for Uganda Tourism Board on a 3 year term. The Board has an oversight and advisory role over the work and plans of UTB. The Board of Directors is headed by a Chairperson supported by members representing public and private sector tourism stakeholders” (UTB – Board of Directors link: http://www.corporate.visituganda.com/about-us/board-of-directors/ ).

So the Ministry themselves should have the ability to make decisions fitted for appointing the needed personnel, without having the blessing of the President nor the Prime Minister. This is just one of the agencies and it didn’t take long time to look into it, the funny thing was, when you tried to go to the “Management Team” link on page, the only thing coming up on the page was “Bad”. So the knowledge of missing links and personnel is even visible to the tourism flagship page.

That the Minister Ephraim Kamuntu has work to do and people to employ certainly, also to get budget to keep their salaries in balance, as the agencies does need funds. Certainly, he has a State Minster Godfrey Kiwanda Suubi, who must have some insights and knowledge of some heads to collect. In addition, the Permanent Secretary Doreen Katusiime got know somebody fitting the program and vision of the agencies. If none of these three smart and bright, fellow appointees of the President can pick someone to the boards. Than the Director James Lutalo, should be able to find someone, educated and experienced in the field to envision the progression of the tourism industry and the wildlife experience in Uganda.

With the abundance of Presidential appointments to the Ministry, they should have the capacity and the ability to get the boards up and running, as well as a check-and-balancing act, to see that they do what the Ministry are supposed to do. So that the destination Uganda, can be a splendid travel for tourists. To make sure that they can have the best time while being there. Peace.