The Prime Minister since March 2017 was impeached today in the Lower House of Parliament in Mogadishu, PM Hassan Ali Khaire or Kheire. The Norwegian-Somali former oil executive and humanitarian in Norwegian Refugee Council.

He has no fallen from grace, just like his allies got rid of speaker Mohamed Sheikh Osman Jawari in 2018. Who knows if the PM was behind the failed impeachment of the President Farmaajo in 2019. Now in 2020 he has himself gotten impeached by the same house, where he celebrated victory two years ago.

Khaire has a mixed review and that is for all the right reasons. It is for the seemingly easy access to licensing oil blocks to former comrades and companies. Also, his friendly relations with other allies. The possible use of networks and working as a satellite.

In 2019, there was reports that the PM had bought a Ahlu-Suna Wa Jamaa (ASWJ) militia of 4000 based in Galmuudug. Also, that he was using his proceeds to ensure loyalty of commanders with the Somali National Army (SNA) and NISA. Who knows if this all true, but if it is. Then, he has more power to himself, even after the fall from grace.

We cannot know at this stages. There been battles between the President and the PM on which model that was supposed to be used in the up-coming election. Also, if the PM wanted the Parliamentary model and not the one-to-one, which the President preferred. There been meetings done with states, which the President haven’t approved off and some said the PM crossed swords by doing this. Therefore, he had to be impeached and the Lower House would comply with that wish. As it has been a place of automatic approval of the will of the President since the impeachment of Jawari.

Clearly, Khaire has made his own bed. He has organized a lot of this and it backfired. He was trying to fix an easy access to the thrown post-Farmaajo. Hoping his allies and the ones behind him wouldn’t budge. However, that hit left-field and he lost today.

Some is saying his the best PM the Federal Republic ever had. With time and when his full record is exposed. We might know more. There will be allegations and alleged actions made. Also, if he was pocketed through Qatari backers or not. Who knows if the most vital part was to license the oil for Soma Oil and other partners.

Farmaajo may have won today, but he has to appoint someone who will get the same acceptance and ability to lead ahead of the elections. It will only be rocky from here. Khaire will still be in the wind. He will be around and mock every move. The real opposition ahead.

There is too much money at stake. To many business deals and obligations in the hands of the former PM. To just back-down and give way. Yes, he doesn’t have the title. The Lower House went against him. His allies turned on him as well. The PM must have thought he had enough support to win by Parliamentary Elections alone. However, that wasn’t true, they are all there to do the bidding of the President.

If the President appoint the wrong PM now. That will not only hurt his chances in 2021, but also deteriorate the political stability ahead of elections. As the Lower House might impeach him to again and this time succeed. As they accepted the President will to get rid of Khaire, but not having a good successor.

I don’t know, but this here is shady. The Famaajo and Khaire team-up is no history. Three years of work together down the drain. The President might look like a winner today, but down the line. He might regret this. His former campaigner and ally will turn against him now.

The PM who has fallen. Have now the opportunity to run all on his own accord. He can push his way as he wants and doesn’t have to consider the President at all. Some might say his fallen, but will only be proven by the next up-coming election and what he does then.

Because, the final is not here today. Yes, others has gone silent after they lost their title. However, I doubt Khaire is that type. Just await, there is a storm brewing. Who knows who will be hit by this in the future. The President or the MPs as well. If the move of President to impeach the PM wouldn’t create a ripple effect.

Khaire lost today, Famaajo might loose tomorrow and who knows when the MPs of the Lower House will loose too. Time will tell, but God knows what this might do to the Republic ahead of its elections. Peace. 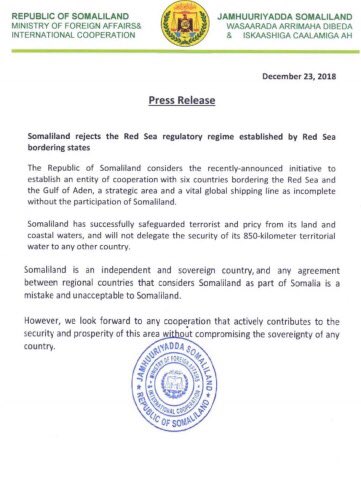 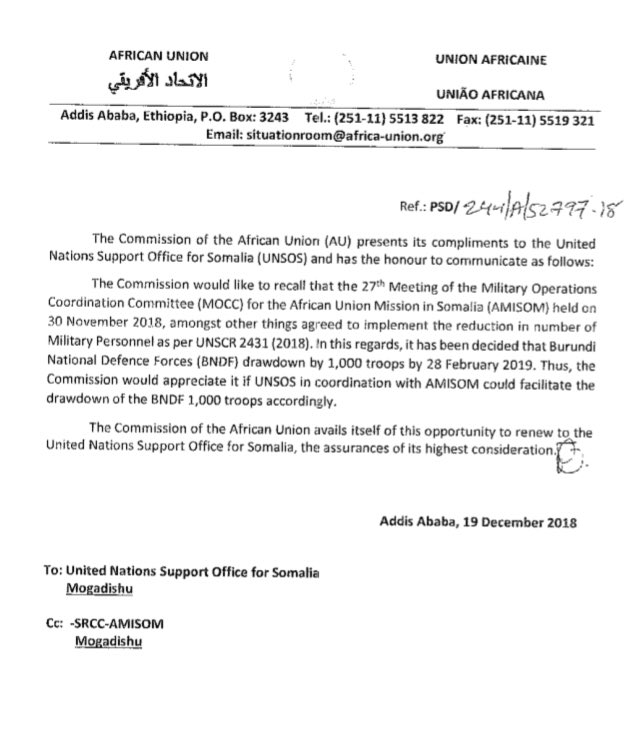 Today on the 12th December 2018, the Speaker of the Lower House Mursal was released. On the same a new twist to the saga of Impeachment against Farmaajo. This story doesn’t seem to die. Therefore, two brief paragraphs, to extend a hand to explain the special times we are in.

On the 9th December 2018 there was over 92 MPs who signed themselves on an Impeachment of President Mohamed Abdullahi Farmaajo. While there was nothing directed at Prime Minister Hassan Ali Kheire. That is why there speculation if he was the one behind the scenes fixing it. So that he could topple the President. This was served the Lower House Speaker Mohamed Mursal Abdirahman, who accepted the Impeachment. To file it and put it forward in the Lower House of Parliament would be really a stand-off.

Since the 10th December 2018 at Villa Hargeisa, the Speaker has been under-house. He has been that for two days now. The Security Forces sealed it off as the Impeachment came into play. While today on the 11th December 2018, the Secretary General of the Parliament, Abdikarim Hajji Bux deducted 14 MPs from the Motion of the Impeachment. Because of that the Motion was declared invalid. That has happen as the Speaker been under house-arrest.

So, now on the 12th December 2018, the Lower House Speaker was released and even been at Villa Somalia. Mursal has decided to table the Motion as per protocol, meaning the Secretary General acts while him being house-arrest has been countered as “null and void”. The declared lack of merit is really shown, as Mursal intend to pursuit the Motion. Therefore, the whole run is set a blaze again. Because, Mursal claim the validity of the Motion.

Therefore, the ones who thought the game could be rigged by the guns and the assault on the Parliament, by House Arresting Speaker was wrong. It was a cowards way of pursuing its goal. Still, the President did it and now, the Speaker retaliates with protocol and rules of the Parliament. In sharp contrast to the ones used by the Executive. Who in self-defence used the SNA to siege Villa Hargeisa.

This story doesn’t die, the President is still fighting to stay in power. We can wonder what is the next step or turn. As there is nothing unseen or undone. As the President might do like Kheire did with Jawari. Besiege the Parliament with the SNA to get his way. We have seen it before, and could see it again. Peace. 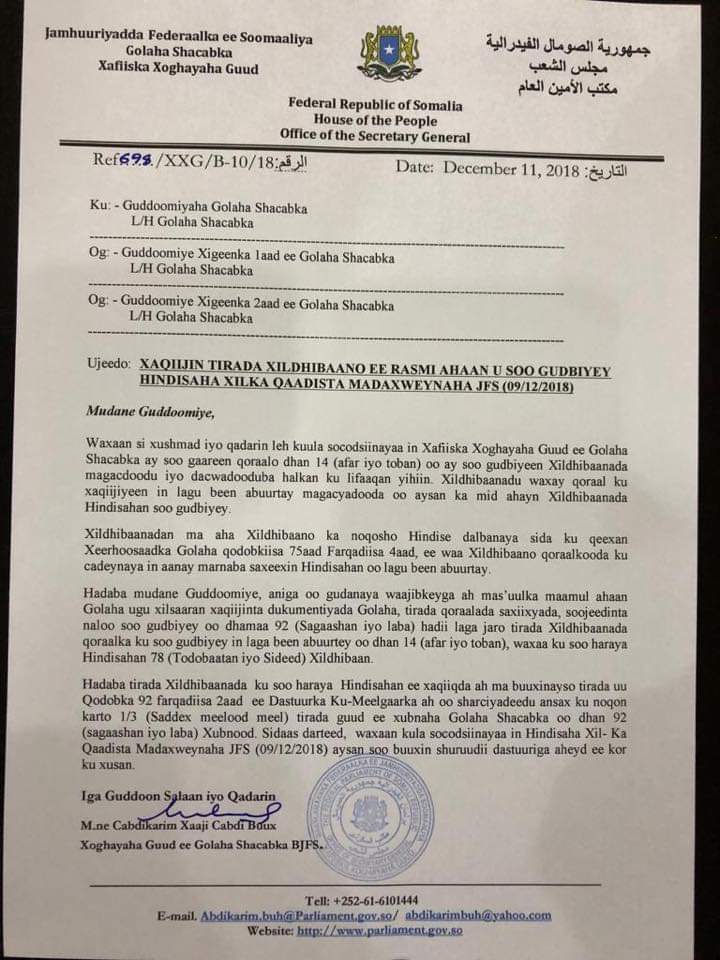 On the 9th December 2018 there was over 92 MPs who signed themselves on an Impeachment of President Mohamed Abdullahi Farmaajo. While there was nothing directed at Prime Minister Hassan Ali Kheire. That is why there speculation if he was the one behind the scenes fixing it. So that he could topple the President. This was served the Lower House Speaker Mohamed Mursal Abdirahman, who accepted the Impeachment. To file it and put it forward in the Lower House of Parliament would be really a stand-off.

Since the 10th December 2018 at Villa Hargeisa, the Speaker has been under-house. He has been that for two days now. The Security Forces sealed it off as the Impeachment came into play. While today on the 11th December 2018, the Secretary General of the Parliament, Abdikarim Hajji Bux deducted 14 MPs from the Motion of the Impeachment. Because of that the Motion was declared invalid. That has happen as the Speaker been under house-arrest.

This shows what sort of political play the Villa Somalia does and how he clears the House. When the Villa Somalia wanted to get rid of Speaker Jawari, they sent the army to the Lower House and besieged it. So, in April 2019 Kheire won the match and the stand-off. After nearly a month of political hardball. Jawari resigned… and lost, but the issues are still there.

We can wonder will happen next, how long will Villa Somalia keep the newly minted Speaker behind the Lower House? Because keeping Mursal under house-arrest because of Motion of Impeachment. Proves that the leadership is immature and not nurturing the process. As the FGS and Villa Somalia really addressing this the wrong way.

If they had a case, they should have answered the Lower House in Person, not sending the army to the Gates of the Villa Hargeisa. That is just weakness. The President is still a coward, the only difference is that he is carrying a gun. The Lower House filled a Motion questioned the Agreements done with Eritrea and Ethiopia, as the President has done deals without being transparent with the Parliament. That is why they could doubt the President. Secondly, they could have been swayed by outside forces. Thirdly, they could do it try to get more cash and funding.

We have not heard much from the rest of the MPs who was Pro-Impeachment. There will be surely more aftermath to this. Certainly someone went to play, but didn’t get their result. Also, some tried to play hard, but got stamped on.

Even if the President thinks he won now, this is not how a victory looks like. Villa Somalia didn’t win, but didn’t lose either. Farmaajo are saved for the moment, but is a fragile President. As he needs the soldiers and armed forces to get his way in the Lower House of the Parliament. The FGS and Villa Somalia is really weak. Peace.