Archive for the tag “Missing People”

The sad story of Christopher Aine

We live in times where the regime has gone further and made moves that is just unjustified. Hon. Amama Mbabazi the former PM of Uganda and one of the independent presidential candidates in the general election of February 2016; have strong issues with the ruling NRM-Regime he we’re a former member of and in the inner circles of.

Hon. Amama Mbabazi is running and has a campaign team under the Go-Forward Group and The Democratic Alliance (TDA). Parts of that is a security detail that is restricted under the Electoral Commission under guidelines of the Uganda Police Force. Dr. Badru M. Kiggundu should know about this because he verifies and validates the running sheets and applications. IGP Gen. Kale Kayihura has knowledge of the security detail and usually adding people and weapons to secure the presidential candidate.

In this picture we’re the Security Detail of Amama Mbabazi where a brother who run it and we’re the aid of him, Christopher Aine. He is now a pivotal man and also a part of the struggle that Mbabazi had with the government. On the 13th December 2015 the election-violence that we’re sponsored by NRM and showed with cars of Sarah Kaglingo; this is where the local Regional District Police Commander helping to facilitate the Crime Preventers to make it happen!

The aftermath have been Go-Forward Security Team have been jailed. Christopher Aine went missing from around 17th December 2015 and never really surfaced since then. Mr Aine was picked up on December 17th at a round 6:00am by security officers from Bbunga, a Kampala suburb and taken to unknown destination along Luwero. 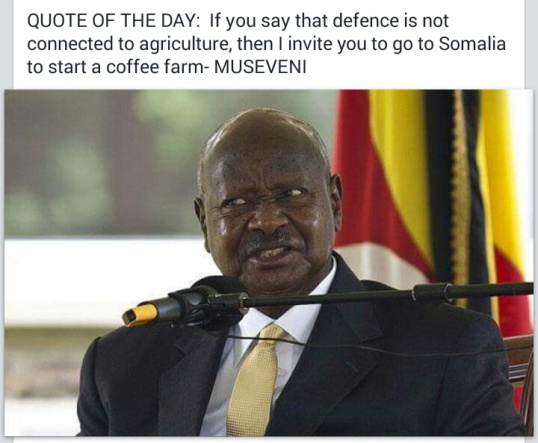 “If you put your hands in the anus of a leopard, you are in trouble” (…)“Thugs attacked NRM supporters. They are being rounded up, you cannot attack Ugandans. How can you attack NRM supporters in Uganda?  They’ll regret it”. He surely meant somebody in general that day.

The rest of the Go-Forward Security Team went to jail and other people involved in the campaign of Amama Mbabazi went to jail in the two weeks after Ntungamo clashes and election-violence. There we’re 17 people arrested at the Headquarter in Kampala on the 21st December; on the same day at the residence of JPAM four people we’re jailed. But still at this time there we’re no proof of Christopher Aine.

“Police has issued notice to the public appealing for any information as to his whereabouts so that we apprehend him to answer charges relating to the incidents of beatings in Ntungamo district” (…)”We have put a reward of Shs 20 million for anyone who can help Police with information leading to his arrest and prosecution”.

“Aine is the key suspect in the Ntungamo incident but he has not yet been apprehended, as he is on the run or in hiding. As police, we are offering a Shs20m reward for anyone who will tell us where he is hiding”.

On the early 6th January IGP Kale Kayihura have asked the Go-Forward Camp to bring forward Christopher Aine. Since they must be hiding him somewhere; Kayihura accuses the camp of hiding Aine, who is wanted for participating in clashes between National Resistance Movement (NRM) and Go-Forward supporters in Ntungamo district.

On the late night 6th January the photos of a deceased Christopher Aine arrived online. I will not show it. This photos we’re released by Charles Rwomushana. They we’re later released on the 7th January in the Daily Monitor and Red Paper newspapers this have led to the editors being jailed for showing them to the public, which we’re already floating online for close to 24 hours. Here is the letter that the Police sent to Red Pepper today.

“Youth activists led by Norman Tumuhimbise, the National coordinator of the Jobless Brotherhood launched a manhunt for Aine at the home of his mother Jennifer Namuleme in Katale zone in Semuto town council in Nakaseke district. According to Tumuhimbise, they intend to raise Shillings 40 million to reward whoever will provide information on Aine’s whereabouts”.

On the 7th January 2016 CP Fred Enanga has claimed the photo circulated where manipulated. While the sister of Christopher Aine and brother has claimed it to be him and have visited the Kampala Capital City Authority Mortuary to find the body and collect the remains of their deceased brother. Relatives of missing independent presidential candidate Amama Mbabazi’s aide Christopher Aine, have failed to trace his body at the mortuary, where they had gone to check for the reported dead body this morning. So after this the have claimed again that the family and Go-Forward are hiding Aine somewhere.

Also today the sister of Aine want’s the police to issue an warrant on the media who have published the photos, while CP Fred Enanga want the Jinja Road Magistrate to issue an warrant for the missing Christopher Aine. Later in the day today we’re just one editor of Red Pepper Newspaper who had to give statements to the Police. Now hours after three editors are detained from the paper is under arrest for releasing the story to the press. Police claims they know where he is missing.

This here is starting to seem like UPF need better spin-doctors because nothing fits, I am just waiting for them to detain the sister for false-claim of picture in the media. The Ntungamo Clashes that we’re NRM’s fault have proven the issues of the one-man rule and their way of vengeance. Live free or die harder!

IGP Kale Kayihura tries to look good and make his men look wise. The same with CP Fed Enanga they might trick the die-hard illiterate hillbilly who hasn’t got their mind of their own. The rest of us see through it. There are too many loose points to the story and the police have a violent record that is longer than the hospital records at the Kings Hospital Mulago in Kampala.

That the UPF is after such a long while UGX 20m proves that there is something missing; it must be because he we’re an aide to the Go-Forward Presidential Candidate Amama Mbabazi. If he we’re one of the kids or people being washed on the shore at Lake Victoria during late-December 2015. Then we would know they we’re extra serious, that was a big group of people who lost their lives. Christopher Aine is important and the trust issues between Police Force and the people of Uganda they are supposed to serve. It proves that the Aine case is special and that it wouldn’t be weird if Special Forces Command is behind the abduction and made-him-go-missing. Later letting him loses his life. Uganda Police Force have taken people in the night and after social media and other people react they surface like Norman Tumuhimbise and Vincent Kaggwa we’re missing for two days in July 2015 and the family had to task the Police to release his all of a sudden with bruises and such. There is something wrong with Police and their actions toward opposition members and leaders in Uganda. Christopher Aine’s story is a sad one and he seems like he is deceased and hurt by the Police of Uganda by the Photos released online and published by the Red Paper Newspaper. I am just sad for the family, the Go-Forward Team and the election in general since this a useless death. A person is more valuable than power, money or elections.

That the Police can that easy take a life and get rid-off opposition figures brings worry of the state of rights in Uganda. The Police is not serving the people if they are killing the aid of Amama Mbabazi. That proves the issues between Amama Mbabazi and Yoweri Kaguta Museveni are too deep. Something is missing and this can’t be joked about. Christopher Aine did not live to die for nothing. Nothing is an election that President Museveni rigged, that he rigged yet again. Like he has done before; Christopher Aine was a supporter of Mbabazi. General Election of 2016 is so close and the killing seems forced by the power to sprint fear in the Go-Forward/TDA Camp to intimidate them from delivering and making the election harder for Mzee.

Mzee and his henchmen have gone too far. Mzee and his police have not told anything meaningful on the people on the shore of Lake Victoria. They might not be political killings like Christopher Aine. Aine is a manifestation of political violence and the deepest tragedy in this part of the campaign trail. That is a senseless murder of an innocent guard of a Presidential Candidate after the Ntungamo clashes. The Ntungamo clashes that Mzee claimes is Go-Forward supporters fault; which by now have to be credited NRM and their Police, who is clearing their name by killing Aine. The truth will come out; the worst is that this is just one out of many suspicious deaths. So many cars and automobile accidents with important people dies and election violence from the NRM-Regime will be tainted by this. If the international media catch-on, I doubt that, they only care if it is a gay brother who dies, because they matter more than political-killings for the moment. I don’t know why, but Christopher Aine should matter as much as David Kato, but trust me for the international media; they doesn’t see that way, even if I wish it be different. Aine deserves to be the crown-example of the violence in the name of National Resistance Movements Police Force in Uganda. Surely he is! Though the outcome is sad and that the UPF does what it can to spin-it differently. The world need to know the truth and the world want to know what really happened.

The loss of life that is Christopher Aine for being the aide of Amama Mbabazi in this time and day make me sad and furious. The way CP Enanga and IGP Kayihura tries to pin it differently is to wash their hands clean. Still, there are too many plots moving and the violence of the police and following the Uganda Police Force this seems likely. IGP Kayihura told the press earlier in the timeline that he just follows orders. Mzee can snap his mind and could have ordered it like Pizza and IGP Kayihura would say “Kale Ssebo”. So the life of Aine and his life will be remembered for the way the NRM-Regime acts towards the public and hurts the opposition, not serving them or giving them any steady-progress! Peace.