Since the vote on the referendum on the 23rd June 2016, which issued the Brexit. The start of the end of membership status of United Kingdom within the European Union. The UK leaving Europe and becoming a third-party state or a non-member state of the EU.

The dream of many conservatives, even more radical right members of society. Who fought for sovereign state and being less connected to the rest of Europe. Not answering some random bureaucrat in Brussels and the regulations put the UK from the various of entities within the EU.

The UK was supposed to be freed from this and have their own liberty back. However, the lofty dreams has backfired. The realities of the modern world is hitting the fan. It was a reason why David Cameron dipped out and went into the backbenches. Since, he knew inside his heart. That this was a failed enterprise.

Theresa May took over and she eloped a government filled with hard-liners or Brexiteers who served the cause of leaving the EU. However, they didn’t do much or anticipate what was happening. They we’re promising to leave on own terms, that it would rain-money and everything would work without any real consequences.

Nevertheless, that was never true. It was a nice story. Prime Minister Theresa May gave up the cause and being the leader. Left the mantle for Boris Johnson. Another Tory and Brexiteer. A man who easily lies and promised a oven ready deal. While we now close to only a month left to final cession of arrangements. The deal is still not signed and with the official seals.

Brexit has been a mess, the Tories have stifled their own work. They have worked on dreams, but delivering nightmares. They said the Remainers was scaremongering in 2016. However, their warnings and speculated effects are coming into fruition. The industries, City of London and exporters are dipping, closing or has already left. They anticipate the hardships of transferring funds, exporting and other issues that will come with the new reality.

The UK will suffer because of this. The devolution of government in combination of leaving the EU will also hurt London more. As the Scottish and Northern Irish might see more reasons to leave the UK and join the EU. They rather be directly in the EU Common Market, than just being internally in the UK. The Northern Irish after getting into the hectic mess of being in a limbo, because of their placement in the UK and their relations with Dublin. Might give an edge for total unification of Ireland. So, the UK might loose two territories quickly and God knows what happens to Gibraltar. They might hold a referendum and join Spain.

Boris Johnson has shown so much flexing and arrogance. Nevertheless, that is not enough to carry the recession, coronavirus crisis and Brexit. He has three hurdles in the midst of hands. His failure to secure and ensure the Brexit. Is already straining the trust in the UK and the economy itself. It is a reason why companies has left already. Because they could not anticipate what last minute resolves might be. They are in it for profit and cannot risk losing that over a political gambit from Whitehall and Downing Street No. 10.

The Brexit was bound to fail from the jump. They came in on a wrong premise. It was supposed to be easy and without costs. It was supposed to be a quick fix and have no serious ramifications. However, it will and the UK will still have to play along to the EU. While they are outsiders looking in. They are losing the advantage of being a member, but still have to play to get the pay. It is like the UK didn’t know what they was apart of and only could the perks after leaving.

That is naive and shows how these Conservatives played with people’s mind and not being honest about what it would entail to leave. They said they had them covered and it would be fixed by just clicking their fingertips. However, it was never that easy. That is why so many ministers have come and gone. That is why the prolonged agony of the negotiations are still lasting to this day. The UK still think they can bushwhack a good deal. However, the EU has already set the bar and they cannot push that. Even if the Tories believe they have enough leverage. That bargain is very over. As the UK have lost before they even started. As they come with a fake premise and you cannot win anything on a bluff, except in poker… but not with Brexit. Peace.

Prime Minister Boris Johnson who has signed a revised Withdrawal Agreement (WA) and has a deadline of 31st December 2020 to end the transition period between the European Union and United Kingdom. That is all making sense.

EU negotiator Michel Barnier and the European Council have put out a statement on the 15th October 2020. Where they put forward the guidelines, yet again. While the Tories, David Frost and PM Johnson thinks they can move the goal-post in the final stages of the negotiations.

The UK are now asking for the trade agreements in line with Canada and Australia. This will not put forward the statutes, articles in the WA and the troubles of Internal Market Bill. The Tories are still playing the game of “what we want, we will get and forget old agreements”.

The funny thing about this. That the agreement made between UK and EU isn’t an old age agreement from a far forgotten past. No, it was made by the same government in negotiations with the EU. The European Council and EU 27 Member States has agreed upon this. Therefore, it is a significant deal, which settles the foundation of the relations between the two parties.

Alas, Boris wants to alter that now. Just mere 10 weeks ahead. While there are two more scheduled meetings and talks. The Prime Minister is putting forward talks of trenches and going to the barricades. As he knows his just playing for his base. The PM is doing this charade and mockery of a public display. He should know, that when you agreed upon certain things. It is a bit late to back-track just mere months ahead of deadline.

The Prime Minister Johnson is now trying to pull the pix-and-mix Brexit and the Red-White-Blue Brexit of Theresa May. This is 2020 and the Tories are still not sure what sort of Brexit it wants. It wants the best of both worlds. It wants to be a non-member, but also doesn’t want to honour the agreement it has already signed. That is showing what sort of disgusting leadership is in London.

London wants to bully Brussels. Brussels, the EU Commission and EU27 have been clear. There is no vindication for the Tories. It is just like a entitled brat wanting more candy, when the store is already closed a few hours ago. The parent have to give the kid a lesson and explain why its not possible.

The PM have to accept this and understand this. The only ones losing on this sort of public play. Is the British public and all citizens of UK. They are pawns by the leadership in Whitehall and Downing Street 10. Who are playing with their futures just to look good. While not making sure the best interests are made with the EU.

Instead, over Christmas an uncertain future is ahead, the UK is sailing alone and with possible “no-deal”. Which is affect all parts of society, most likely a higher inflation and hitting businesses in the midst of recession and a global pandemic. That is what the Tories are willing to do.

Just to look good on Prime Time TV and feed the Brexiteers in their homes. Who doesn’t see the damage it does, until it hits home. Peace. 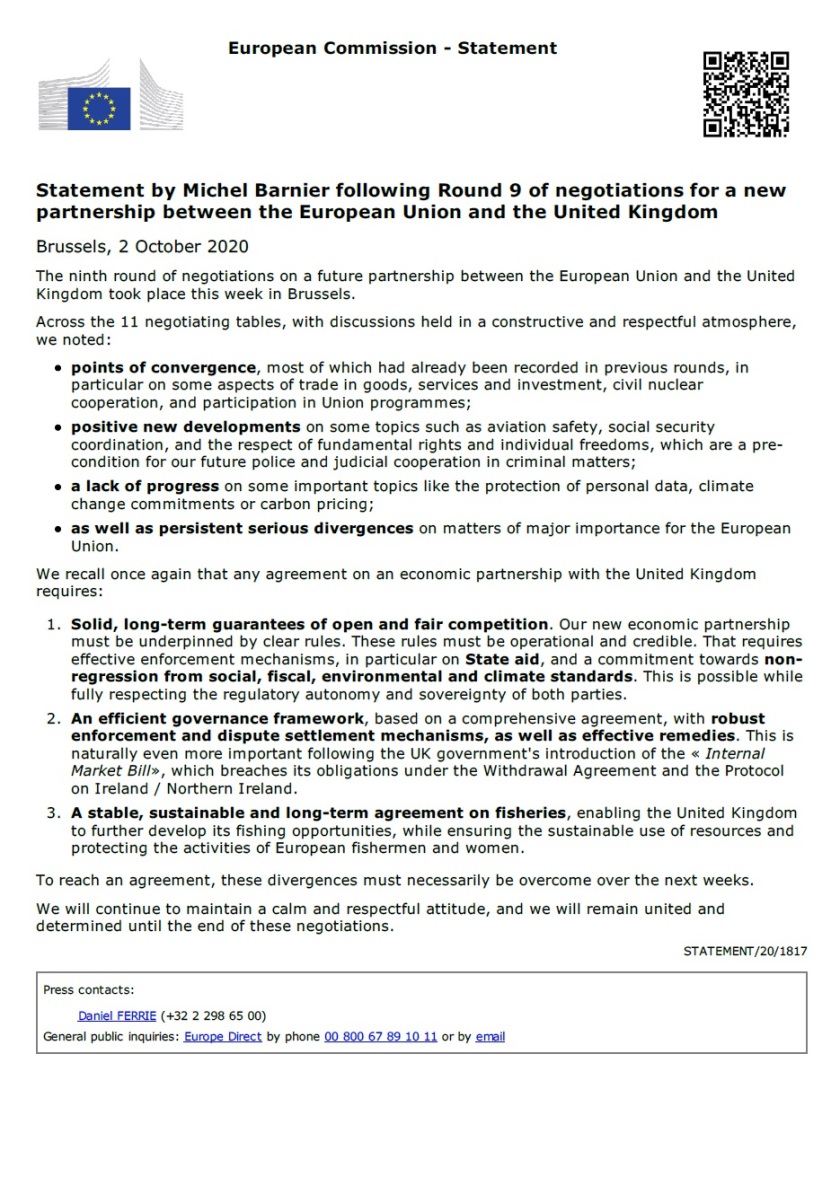 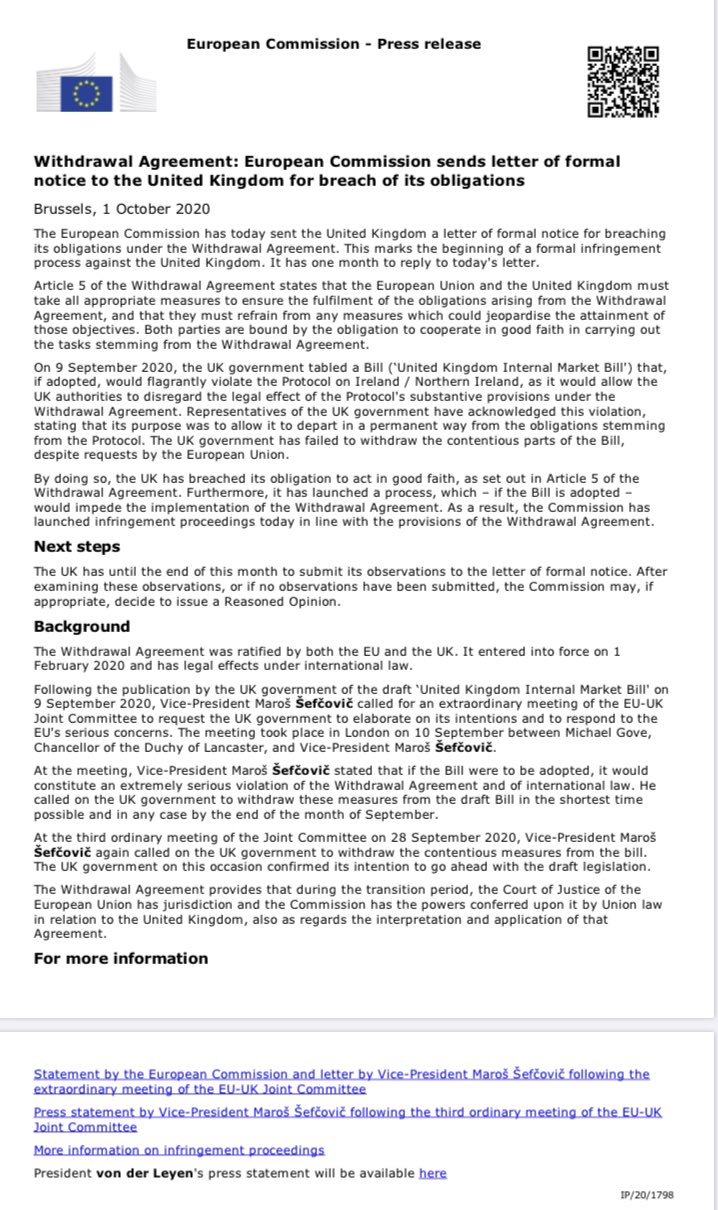