“Uganda says it will cut security ties with North Korea following the visit of South Korea’s president Park Geun hye. Uganda is one of North Korea’s allies in Africa and has had diplomatic relations since 1963. Pyonyang’s training programmes for Uganda’s police and army date back to the early 70s under the rule of Idi Amin Dada. But after meeting his South Korean counterpart, President Yoweri Museveni said Uganda would enforce the United Nations Security Council resolutions banning North Korea from all military links with foreign countries. Sam Kutesa, Uganda’s Foreign Affairs minister, told RFI’s Zeenat Hansrod – @zxnt – that his country is not severing all ties with North Korea” (RFI, 30.05.2016= 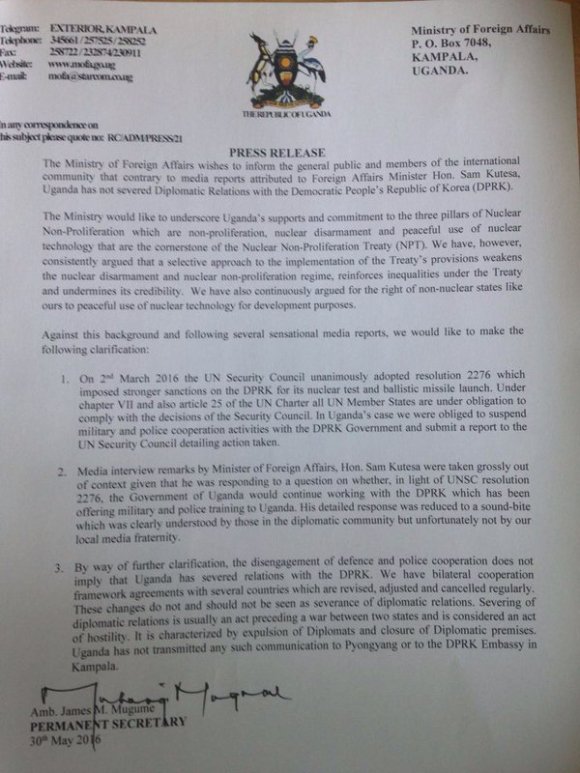 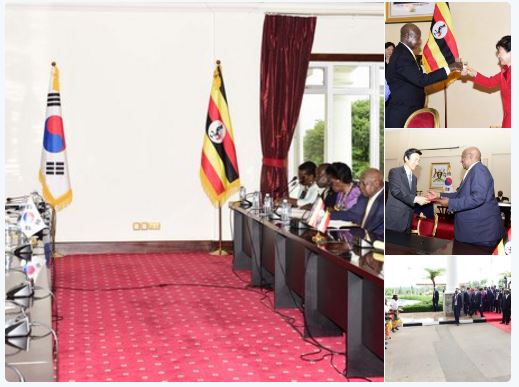 President Museveni is always not caring about his relations, if it is internal or external. The Ugandan Government has the Foreign Affairs through Hon. Sam Kuteesa, who compliments the attraction and biddings for export from Ugandan currency and resources. The South Korean does this do to not lag behind Japan or China in Africa. They want to be the same kind of power in East Africa, now South Korea will take the spoils from their long-term enemy of North Korea at the same time. As the DPRK will be more isolated and lose one ally that have given needed currency to the country as they have trained Military and Police in Uganda.

“When Museveni visited South Korea in May and met with South Korean President Park Geun-hye, he used a Korean-language greeting he said he had learned personally from North Korea’s founding leader, Kim Il Sung” (Fisher, 2013). 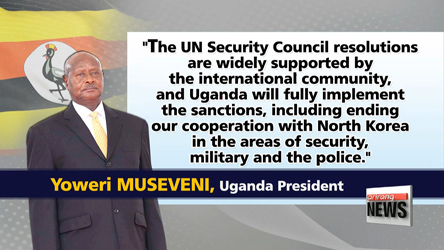 Historical relations between DPRK and Uganda:

“Yet on October 29, 2014, Kim Yong Nam, Chairman of the Presidium of the DPRK’s Supreme People’s Assembly, arrived in Kampala to a hero’s welcome. Over four days, Kim met with the Ugandan President, Prime Minister and Foreign Affairs Minister amongst others, and had a state banquet thrown in his honor” (…)”Not long after the current President, Yoweri Museveni, took office in January 1986, he asked DPRK officers to train police forces and National Resistance Army fighters to use the weapons that preceding governments had acquired from Pyongyang. President Museveni ordered new stock as well. A consignment of North Korean weapons, including surface-to-air missiles and rocket launchers, arrived in Tanzania in 1987 destined for onward shipment to Uganda. Further arms transactions took place over the next two year” (…)”It seems widely accepted that China provided assistance with the construction and operation of the factory, which is owned by Luwero Industries Ltd. Some unconfirmed reports, however, point to North Korean involvement as well. Limited evidence is available to support this claim. Discussion forums for Ugandans, for example, reveal complaints dating to 2004 from residents living near the Nakasongola complex. North Koreans reportedly living on Luwero Industries land had been given free rein to fish in nearby lakes, sending the price of certain fish types skyrocketing at local markets. If true, North Korean personnel may have been involved in the day-to-day execution of Luwero Industries business, at least until 2004” (Berger, 2014). 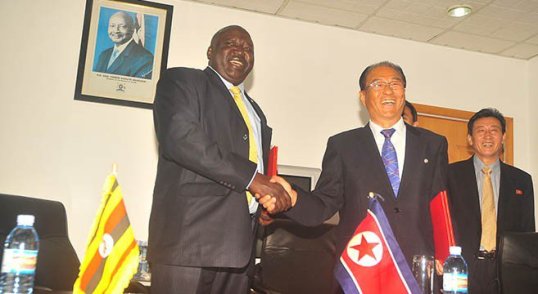 “I have instructed officials to faithfully enforce the U.N. Security Council resolution, including suspension of cooperation with North Korea in the security, military and police sectors,” Museveni said in a summit with his South Korean counterpart Park Geun-hye, according to South Korean presidential spokesman Jeong Yeon-guk” (…)”Uganda has been maintaining military cooperation with North Korea, and the long-time Ugandan leader has visited Pyongyang three times. Some 50 North Korean military and police personnel are believed to be working in Uganda, according to South Korea” (…)”After the summit, Park and Museveni watched as their representatives signed 10 memorandums of understanding (MOUs) between the two nations” (…)”The MOUs call for, among other things, bilateral cooperation in the energy and plant sector, a move that Seoul says could help South Korean companies make inroads into Uganda’s infrastructure market” (…)”A consortium led by GS Engineering & Construction Co., a major South Korean construction firm, has been in talks with Uganda over a US$1.5 billion project to build a refinery near Hoima in western Uganda” (Yonhap News, 2016). 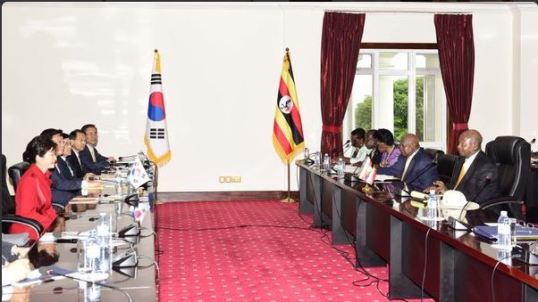 The South Korean are also able to suspend the agreement with North Korea that is a diplomatic win for the Republic of South Korea towards the DPRK. This proves that Asian problematic relations also can give golden currency in the coffers of Bank of Uganda. Money is needed together with the development projects and industry that the Ugandan nation needs.

President Museveni learned Korean from the first North Korean dictator, so that he could speak wisely to the South Korean President of the day. This also leads to good relations and respect of the newly agreed projects and used of wisdom from the new allies and trading partner. The only thing Museveni had to give away was the paid North Korean working in the land and for that he is getting aid and funds for development. Which in all kind of diplomacy is an easy trade, even if it is giving away a long time friendly relationship with North Korea; that is not so important as the new money flooding into Uganda. So if you have had a long-term relationship with the NRM regime and now sees a buck in switching guards. Expect them to do so. 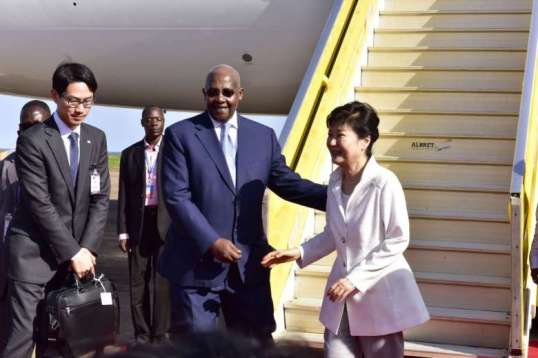 “Supreme Leader Kim Jong-Un said to be greatest friend a good man could wish for, and worst enemy a malefactor could dread” (DPRK News Service, 29.05.2016).

Not that I am a man for the DPRK, they are venomous regime who uses their people’s as pawns so the so-called communist party can shoot at anything flying or floating at their shores. DPRK are such a lovely paradise that only Dennis Rodman enjoys a cup of coffee in Pyongyang.

So that the DPRK gets less currency and gets more closed by foreign relations as Uganda, is positive, since they have soon only the People’s Republic of China (PRC) and the Russian Federation. That must hurt unless Tahiti needs military training or something. Until then they are very isolated. The Ugandan does not this because of their ethical behavior, because Museveni and his regime have not cared in the past, so why now?

They does it now to do something that is a goodwill, to silence the United Nations and also the most important is that instead of paying DPRK for services, when the South Korean will offer cash and development, plus the Ugandan get rid of one mosquito in the old feud of agreement with military training from North Korea. So he trades cholera with candy. Peace.