Opinion: Gen. Elwelu isn’t an hero, his a criminal! 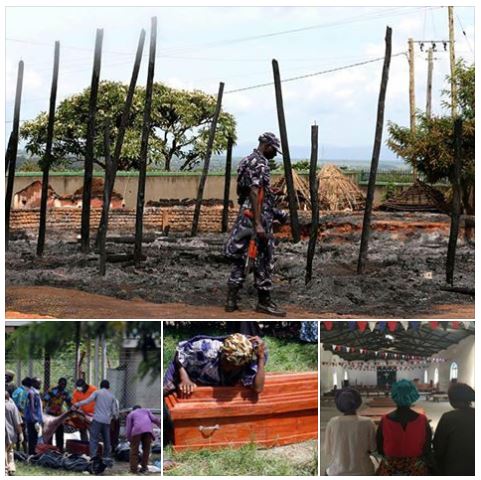 “One year ago, more than 55 people – including at least 14 police officers – were killed in the Kasese clashes on November 26. A day later, the military and police forces launched a deadly assault on the Rwenzururu palace killing more than 100 civilians – including children” (Chapter Four Ugamda – “First Anniversary of Kasese Killings: We Remember” (27.11.2017).

Well, those was the days, the days that Kasese was burning since the Fountain of Honour and the orders from “high above” directed Gen. Peter Elwelu to conduct this massacre. Burn the palace of the Kingdom of the Rwenzori. While ensuring the arrest of 180 people and also send the King Charles Wesley Mumbere into exile in Kampala. The ramifications of these events still has effects to this day.

As the living guards of the king is still lingering in jail. Several others with open cases against them. While the butcher of Kasese is praised, promoted and become a high ranking official. So, the killer now is not only an elevated military officer, but also a regarded citizen. However, the blood on his hands, the killing of civilians and the guards of the Buhikira palace in Kasese shall never be forgotten. No building or relic built by this man shall erase that.

Just look at the rewriting of history from New Vision:

“Elwelu, remembered for his leadership role in the 2016 attack on Charles Wesley Mumbere’s palace in Kasese in 2016, said Elohim is the name of God used frequently in the Hebrew Bible just like Yahweh. “On August 14, 2017, I had had a vision from Elohim directing me to construct the house of Elohim,” Elwelu revealed to hundreds of people who attended the event” (Emmanuel Alomu – ‘Former Kasese Commander Gen. Elwelu constructs church’ 01.12.2019).

His the man that ensured the devastation, the killings and the massacre. The arrests and the king in exile. The blood and the mass graves of Kasese was all because his orders and his actions. The President and his handlers let this one go too. They have not challenged or arrested him for it. So, they must have sanctioned it, but he carried the orders and secured this outcome. Therefore, he shouldn’t be praised for greatness, but be remembered for the massacre he created.

Gen. Elwelu isn’t a hero, his a criminal and a man whose crimes are against humanity. His a killer and he should answer for that in courts. He shouldn’t be the man to make churches, statutes and monuments. He should answer for his crimes and be behind bars. As there are too many victims, to many families scorn and forever lost some of their loved ones. Because of the actions done by this man. Peace.

“I have seen our honourable MP (Luwero District Woman MP Eng. Lillian Nakate) here. We love you very much, but you people (MPs) like causing chaos in Parliament, without knowing that chaos is our business. You try creating the chaos again and we shall come and bring peace in your heads again” – Lt. Gen. Peter Elwelu

Surely, I would never anticipate anything of democratic values or understanding of Parliamentarism from the dude behind the burning Buhikira Royal Palace of the Omusinga Charles Wesley Mumbere Irema-Ngoma and killing of his royal guards plus other casualties. I would not expect that man to care about Members of Parliament, that they supposed to control him and give him as a Lieutenant General a mandate. As the Lt. Gen. Clearly doesn’t understand his role, but that is because the President is acting a militarised leader and not a representative of the people.

The whole NRM is praising the army and what it does. Therefore, it is not surprising that Lt. Gen would say this stuff. However, this proves that the army can easily invade and be strangers in the national assembly as they did during the Age Limit Plenary Sessions on the 27th September 2017. This is done to prepare for the President for the General Election of 2020. Clearly, the Lt. Gen. is ready to do this again. Who needs Parliamentary rules, when the army is ready to cause havoc, because of chaos.

The army man is not finished with his speeches, as the opposition also get also under fire. This being another stern warning, since this man cannot shield himself from himself nor the ability to understand his place again. That is not new, but his just repaying favours to the ones who has promoted him. Therefore, he is defending the UPDF and indirectly the NRM. Which he knows is the reason for his fortune.

“You will not destabilize peace in this country when we as UPDF are here, UPDF will not allow this. We fought for this peace and we shall defend it at whatever cost because we are trained to do that. You will meet us ready, you will meet fire and you will meet a disaster” – Lt. Gen. Peter Elwelu

The Lt. Gen needs some civic education, maybe even some understanding of politics and parliament, but we cannot blame him for this. He is just trained to be this way. We couldn’t expect a man whose proud of killing innocent civilians and being promoted for it. That he would care for civilians, neither caring for civic education either.

The Constitution of 1995 is very clear on the article 79: “Functions of Parliament.

Clearly, the Lt. Gen cannot grasp this, as he thinks the army has the control and set the bar. Instead of remembering the representatives of the people, the lawmakers are the one setting the standard. Something, the army man doesn’t understand. Maybe, he doesn’t want to. As he just want to show force and intimidate the MPs into submission like the President likes.

Surely, it is not the army man whose supposed to regulate them, but the other way around. This is by law, by the Constitution, the one guiding law and principal document of the Republic. Therefore, the mandate of the UPDF is set by the Parliament. This is why the argument of the Lt. Gen is foolish. He should start to grasp reality, but then again his a hired gun for the regime.

I don’t expect the man has studied the Constitution, his been busy with weapons instead of picking brains, except exposing brain-matter. Peace.