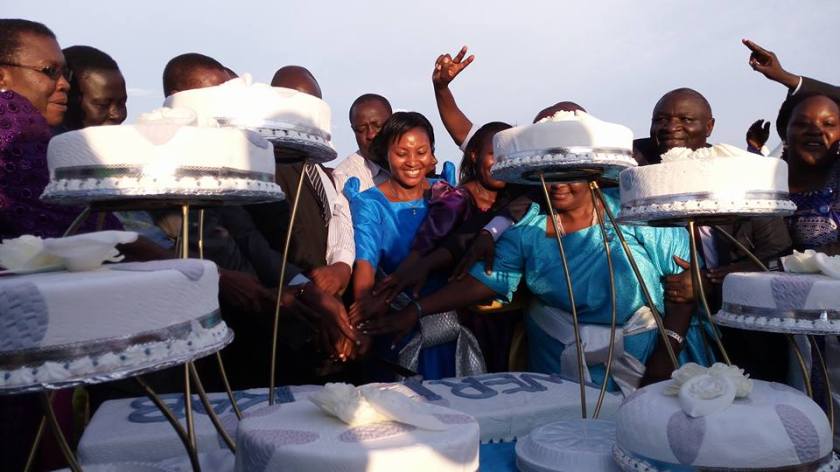 It’s one of those days I say kudos to the men of Forum for Democratic Change – Youth (FDC-Y) wanted the sacking of Hon. Winnie Kiiza and her position as the Leader of Opposition (LoP). I am amused and amazed that it happens over money and the lavish lifestyle. The escalating funds and extended add-ons of expensive SUVs and Caskets when their imminent death conspire and their lives expires.

Well, that is a good cause, but the FDC Youth should have reacted to the day she went into office of Leaders of Opposition and joined the company of under the Movement and their Executive. That should been a battle-cry, but there we’re none just a silent approach where the trailing election and rigging where validated by the appointment of the Cabinet and the Shadow one.

So that today the FDC-Y decided to counter and ask for axing her today is a bit late. Hon. Winnie Kiiza and the FDC National Executive Committee (FDC-NEC) wouldn’t sack or change the Shadow Cabinet just months after arrival unless there an internal-coup in the party as there in the United Kingdom in the Labour Party where you either against Jeremy Corbyn or Owen Smith. The FDC is not Labour, but there have to be similar acts towards the MPs and he hardliners in the party to dissolve the Shadow Cabinet of today.

So the reason for her silence she is already an accomplice with the fellow MPs who wish the lavish lifestyle and become honourable overnight. The reality of the matter as long as the LoP and Shadow Cabinet is there, the 10th Parliament is in effect and the day-to-day business of the National Assembly will go. So the idea of the LoP to be sacked and change will matter is pointless. 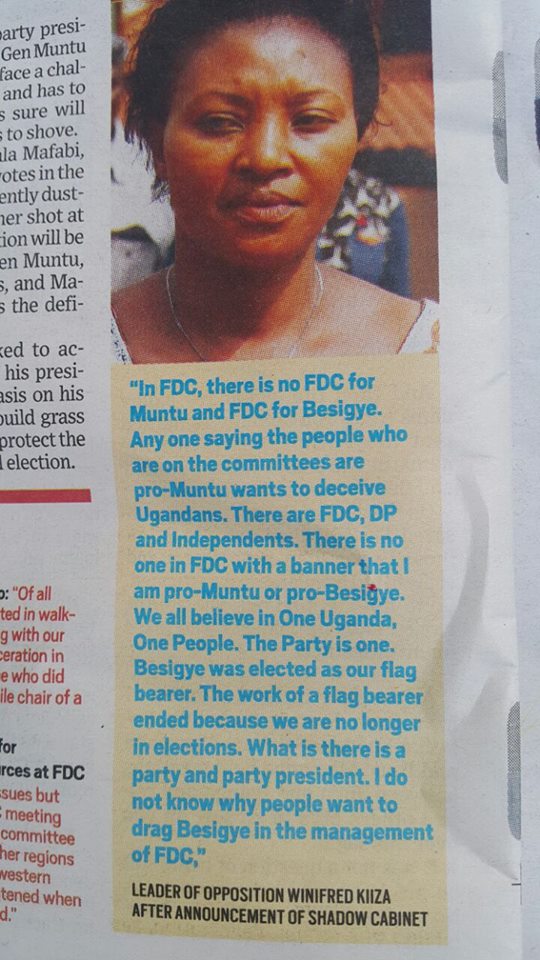 The FDC Youth shouldn’t get the LoP sacked; they should get the whole Shadow Cabinet discontinued and stop validation of the National Resistance Movement (NRM) that is what the FDC-Y should propose in this matter. The monies and advantages of the MPs will raise so sky high the Jupiter. The riches and wealth of the MPs will continue to surge as the level of impunity and little care for service deliver is there in the shallow halls of Parliament.

I admire the FDC Youth stance, as I have the same for the reckless spending of taxpayer’s monies on the already insulting wealthy salaries and other beneficiary programs for the MPs. So the poverty of the government institutions as schools and hospitals should been the main target of the funds and not SUVs for the newly elected men and woman. Alas, that is the case and the Youth are right with their anger.

The Movement are only interested in their selfish interests of their sole elite and their demands. Sometimes they will give monies to the needed and projects of government, but that will be merely a charade of dishonest approach as the Executive gives out pocket-change while he eats fortunes for supper. This is what the FDC should work against and not accept in Parliament. The MPs are just showing their disregard of the people and their work. This indecency of the representatives deserves to be demonstrated against and sought to stop. But to think that the utter words of somebody who validated the rigged election of 2016; than think again!

The FDC Youth shouldn’t sack Hon. Kiiza for her silence on the indecent behaviour of the representatives. The Youths should have reacted to the FDC NEC getting her the gig in the National Assembly in the first place. Her silence is because she cannot go too far in her criticism because she has already altered her motives and ambition to suit the captors of power.

She will be as strong and weak towards the Movement as the Hon. Beti Kamya of UFA. The spine of character has already shown as the where no problems for sending over a dozen of MPs to the Seminar in the United States or the shutdown of Parliament for a week for all the ones travelling so far. There we’re no quarrel in the matter. This proves that Hon. Kiiza is already part of the problem and the get-rich-quick click of Parliament. There isn’t any evidence of otherwise as the suggestions of a possible strong opposition there are dwindling. There are certain men and woman there still, but there far apart as Hon. Frank Mwijukye is one of them. Still, he is a part of losing end and Hon. Kiiza helps him to lose!

Kudos to the FDC-Y for their action and approach, but the gates is closed unless they want to marginalize the Parliament and not just take a bold stance against their own. That I and many doesn’t’ validate the LoP or her Cabinet is becomes of the dissolution decision to support the Movement by becoming it! So the losing end where already taken when the token and signs where made to the Speaker Kadaga and Deputy Speaker Oulanyah earlier this year.

Now, the time has come for the FDC-Y to either to take the stance of NRM Poor Youth. Try to disembark from the NRM during the Campaign period to the Go-Forward. If not, they can be a nuisance to their mother party… that will not generate the needed extra youthful idealistic force that either can excel a party or can muster the needed grass-root progress that it needs. The FDC-Y needs to show with their ideas and actions that they want to counter the FDC NEC now and their acts of validating the Movement. Not only by axing fellow Hon. Kiiza, but get them to axe the Shadow cabinet! If they do so and asks for that, than they will create empty space in parliament and also question the election that were. Defy and prove the Campaign of Defiance of Dr. Kizza Besigye worthy! Peace.