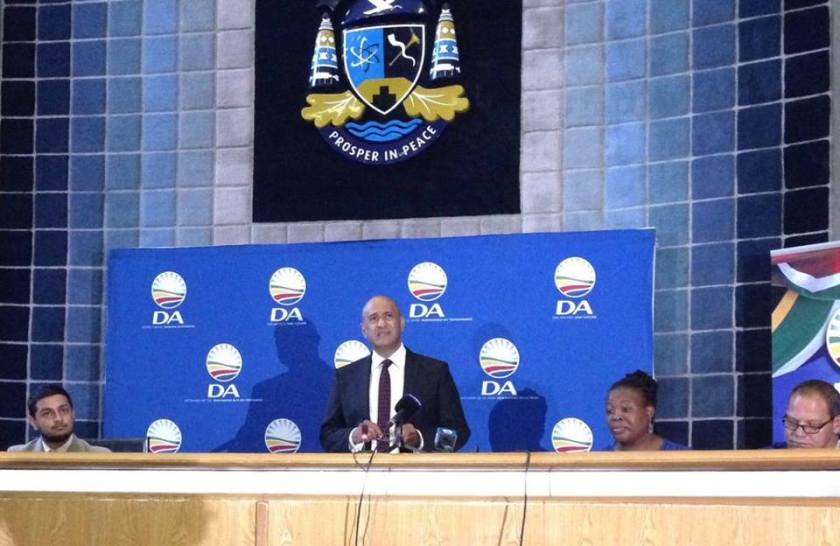 “Throughout my life, I believed the ANC embodied these values. It was where I put my faith for a better life for all South Africans. It was the party that enshrined my values when Nelson Mandela signed our constitution into law in 1996.

But sadly, after 22 years of ANC government, we have been betrayed. The ANC has changed, and the ANC of Jacob Zuma is not the ANC of Nelson Mandela.

I accept this DA nomination, not just because I’m leaving the ANC, but because the ANC has left me.

The time has come for change and the DA is the vehicle to deliver that change.” 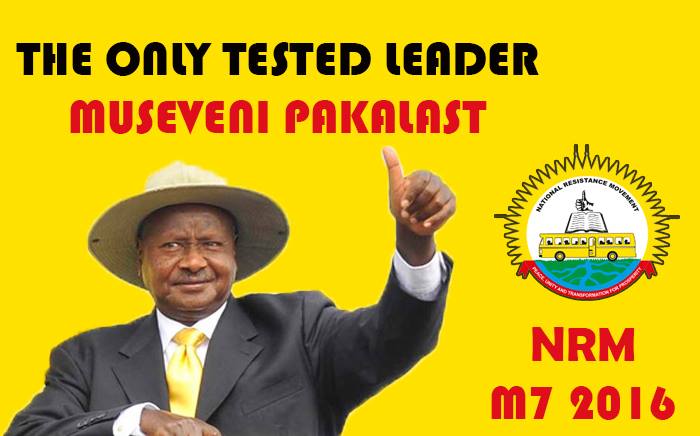 If you thought the weekends reactions to the FDC party and their struggles to do party work and campaigning that has been an issue for a long time. The interesting about what I have seen and gotten news about, is how the Police and the Public is reacting in the ruling NRM-Party! While doing their duties to vote in the Primaries Election. So they can pick the ones to elect their own local leaders and who set to represent their area and a possible MP in the future. NRM-Regime goes even too far with the rigging and malpractices with the NRM Electoral Process and Commission who let this practices happening. We can see what has happen today and the reports are staggering, also with the former day’s events in Ngarama and Lwengo. All of the reports from National Resistance Movement Primaries should be seen as a warning. This is not looking good and with all the reactions the results and local disarray can be seen as the people see through the malpractices and rigging.

“Supporters of Mr Benon Matsiko Kyampa, who was contesting for NRM flag for Ngarama LC3 top seat stormed the sub-county headquarters where they abandoned their party cards protesting poll results announced by the sub-county registrar, Mr Robert Baingana, in favour of Mr Silver Kiiza”. This led to even rubber bullets and agony in the district. So the way the police is used to quell issues is really a pattern. Which lead to this: “The deputy RDC Isingiro, Mr Damiano Turyatunga, said they will investigate why police fired bullets and will ensure calm is restored in the area” (Mugume, 2015).

“Ruling NRM party supporters in Lwengo District have threatened to boycott party primary elections over alleged inflation of voters registers. The supporters claim that a big number of registers in the district have been bloated with names of people who are not NRM supporters- something they say is a plot to rig votes in favour of some candidates” (…)”Ms Nakabira said she had discovered that some NRM village registers contain several names than those in the national voters register of the Electoral Commission. “Our party electoral commission should not bother bringing election materials to Lwengo District if they fail to sort out this mess. It will be a political suicide to take part in an election where registers have been filled up with ghost names,” she said” (Malik, 2015).

There have been reports that the District Leader George Mutabazi has fled the offices and area with the ballot boxes. 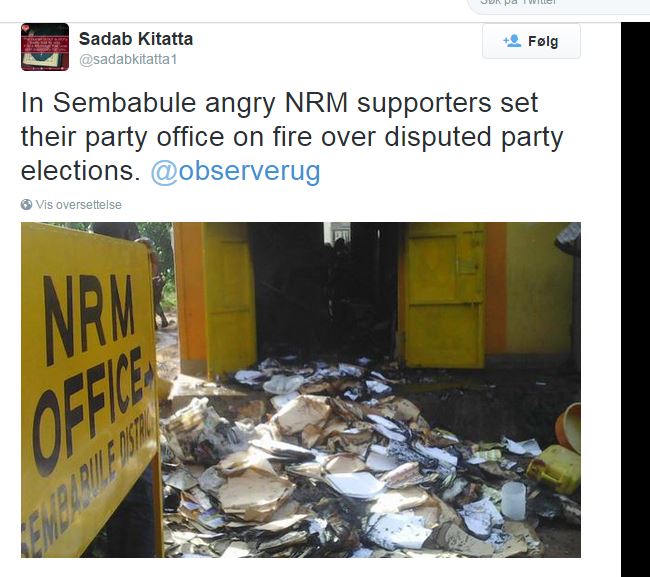 There been reports of fraud there in local elections as well and the NRM members couldn’t accept it. Therefore they set the NRM office on fire this 13.10.2015.

Because of electoral issues and vote rigging NRM members has put on fire their member cards and also been as vile as peeing on Museveni T-Shirts as an reactions to rigging of the local elections. More from the Masaka District is that NRM has withheld the elections results and the reasons are that the winners in the district are suspected to be friendly to Amama Mbabazi. This is happening today!

Also from another source is this:

“This afternoon, Masaka District NRM party Registrar declared Ssekiwala winner after polling 2664 votes against Ssebulas 1780 votes. However, the declaration of Ssekiwala as winner has not gone down well with Ssebulas supporters” (Bindhe, 2015).

There was another NRM office that was lit on fire. This was Isingiro on Sunday 3: AM, it apparently destroyed the older files from 2011 Elections and a dozen other party official papers.

“She however, wants the complaints to produce evidence to substantiate their claims of rigging” (…)”Angry voters throwing pelting NRM party cards after disagreeing with NRM party officials at Endinzi sub county headquarters in Isingiro district” (Kabasongora, 2015).

“According to Idrisa, initially, Kifunga announced Steven Mugisa as the winners of the Bubukwanga Sub County chairperson NRM party ticket but later altered the results and declared his rival George Baluku” (Muhindo, 2015).

Praise for the NRM Electoral Commission:

While this has happen during the elections in the NRM there are certain people who are impressed by the work. MP Cecilia Ogwal said: “”Dr. Odoi should be reassigned to assist Kiggundu because what he is doing is so impressive” (…)”We feel the impact of their confusion and I want the process to be peaceful” (Okino, 2015).

We can all see that there is a tone in the day and recent days when it comes to the NRM Primaries. The results and reactions show the issues that this Primaries Elections in the NRM are turning into a farce. Where the actual election doesn’t really matter and members of the party feels fooled. Therefore going into means that are harsh realities are not sinking in.

This is important when the ruling elite and the main NRM-Regime are shielding in a way. They are shielding the elite and handpicking their loyal candidates, but not the ones that might be wished from the grassroot-organization who might want another candidate and get a change of leadership. With the rigging happening then the exercise and voting is just a planned move so that it looks like a democratic choice. That is what is happening if you score away the local constituencies from picking their men or woman to be representatives. This is what has happen. And that makes the process illegitimate. The representative won’t actual represent the people, but the rigging Electoral Commission of the NRM. The Local Council and MPs might be “elected”, but in reality just picked by the Commission not the people of the Party and Organization. When there has already been famous for the rigging of the General Election in 2011. This here is a new low. Yoweri Kaguta Museveni party is rigging itself and people are reacting. This can only get more interesting. Just as this picture from a Cell in a Prison where they kept the Electoral Ballot Boxes for the Primaries in the area. This was taken photo from somebody kept in Prison of the FDC. Peace.