“A prominent lawyer, Advocate Kabelo Letuka, is in hiding fearing the police will torture him like they allegedly did last night to his colleague, Advocate Napo Mafaesa, who has been admitted to a hospital. Mafaesa was arrested after his client who was also arrested & tortured by police said he has left his unlicensed gun with Mafaesa. Mafaesa is admitted in Hospital for grievous bodily harm” (Lesotho The Post, 12.01.2022).

The Kingdom of Lesotho is now going after Advocate Napo Mafaesa has been tortured and arrested by the authorities. We know it is severe when another colleague Adv. Kabelo Letuka is in hiding. This mean this practice isn’t against one man or his cause. No, this is most likely systemic, as another fears for his life as well.

Both lawyers have faced legal jeopardy before and had cases of severity against them. Still, nothing has hit the wall. Therefore, the state is clearly aiming at them. That’s is evident, as both lawyers have been held in contempt and been charged for strangulation and murder in the past. So, it is not like the state haven’t tried to take these two down plus additional lawyers too.

For some reason the state is going after them. This is really tragic and a worrying signs, as lawyers and attorney’s are the ones who defend people in court. They are retained and do their work to help their clients. Therefore, going after them… is showing the bad side of Lesotho right now. Peace. 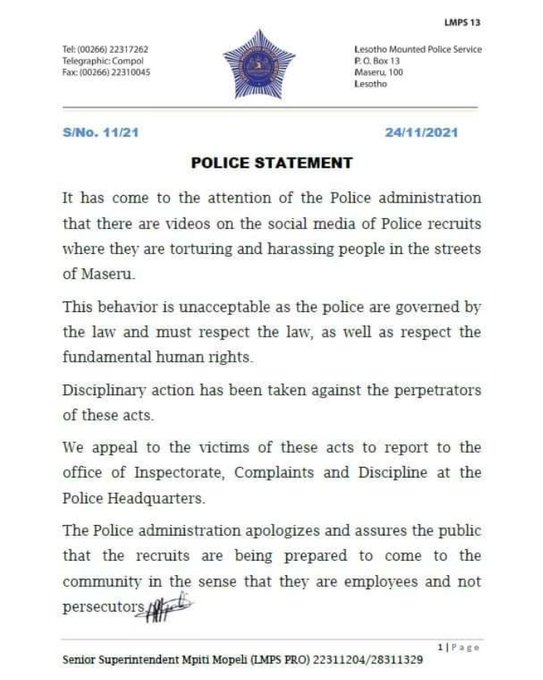 In Lesotho, the authorities and the lawmakers are proposing a new law. Which, if a person has more than 100 followers on Social Media. This meaning Facebook, Twitter, WhatsApp or heck, even TicTok. They got to get license to broadcast and the Lesotho Communications Authority (LCA) have the access to remove content from the set-user.

This is what everything boils down too. That the state are willing to interfere and control the users. The smartest thing the citizens could do. Is to create various of profiles and have cohorts of people in the margin of 99 people. So, that they don’t have to comply with the new regulation.

Because, if they reach a 100 people. They will need a license. These people will need to comply with the rules of the LCA. They must deliver paperwork on who they are, identification, also proof of residence and business.

This is all done to follow and ensure the LCA can remove and block certain content by users of social media in Lesotho. That means that the LCA practically can remove all sort of content it deems as unfit. If a person has over 100 followers, which is a limited reach.

This is the new “internet broadcasting” rules of 2020. Any sort of internet post going out to a fixed number. Got to comply with this regulation. That is how frighten and how fearful the authorities is. If it is a web page, a social media post or a Youtube video. The LCA got to verify the content before its published. If not, they have the rights to delete it and deactivate it.

This here is interfering in people’s privacy. In their direct communication and usage of modern platforms. A way of licensing and authorising people to publish content. In manner, which an Authority will have oversight and direct control. Where they have the legal jurisdiction to remove or delete content as they see fit. If that being a blogpost, a Facebook-Update, a Tweet and even a Message within WhatsApp. The state can through the Authority get rid of that. This is what it means.

The representatives, the government and the ones governing Lesotho is so afraid of their population. So, they have the need to have the power and the legislation to have total control of the flow of information and content online. Because, it is restrictive to have access to every social media, every webpage and such with 100 followers. There isn’t many whose underneath that currently on a platform. This is a deliberate act to have an oversight over most of the public’s content in the Kingdom. Peace.