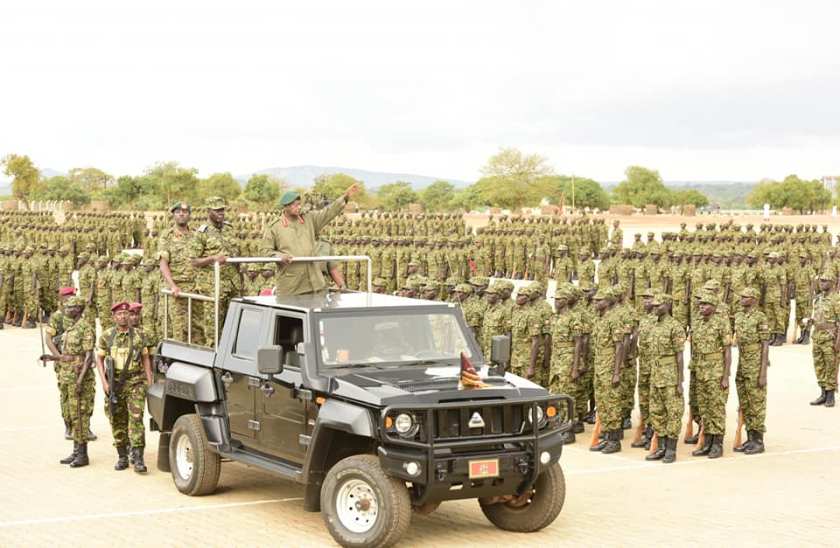 Eh! I don’t like talking about the long destined future, but one is certain. As long Mzee is breathing, he is running as the Flag-Bearer and everyone else is to fall in line. The Grand Master, the Big Man, the Head Honcho, the Leader of Men and all other titles are his. This is President Yoweri Kaguta Museveni. He will not step down. Not as long as he is breathing. That is not happening.

He would not have revised or edited the constitution. He would not have let the military and security forces be such a vital part of the state, as it is right now. The president wouldn’t have used to force against anyone coming his way. Sending a message to anyone who trying to trespass and rule the fiefdom. That is not acceptable. Not even succession from his own flesh and blood. They have to wait as well.

Not that the National Resistance Movement (NRM) have any plans for succession, some cries out loud for it now and then. But later they cry again to their beloved leader and hope for redemption. As they insulted the grand leader. You should never question his powers and his army.

If you question him and his will, you are insects, you are mosquitoes, vermin and bean-weevils that he gets rid off. His army can he always trust, The Security Organizations, the high command and that the Police Force will do his bidding. As long as the state of affairs is like this. There will be no change.

As long as the state is militarized and the state are serving one man. There will be nothing significant different. The names on the ballots might be different. There might be a Farmers Party, Go-Forward or New Formation. However, the results will be in favor of the President.

The 2021 will not change, unless there are vital steps of change. Unless there are people early to see something else and not accepting status quo. Because, the will of doing peaceful transitions through the ballots, has been done again and again. That has been tested and tried countless times by Dr. Kizza Besigye and Forum for Democratic Change (FDC), Paul Ssemogerere/ Norbert Mao (Democratic Party) and Uganda People’s Congress (UPC) Olara Otunnu. However, none of the attempts has succeeded, that is because the system is built for and implemented for Museveni.

Everyone should see that. The People Power Movement has to grow stronger, than the Defiance Campaign, bigger than Walk to Work and pay costs, which none of us want to bear. If you want to dismantle a military dictatorship. It doesn’t come without costs, without sacrifice and without determination. It isn’t about getting SUVs as MPs or not. It is about sustainable freedom for all citizens. Not just the all-praising elite in and around the President.

2021 will for now be another race. Which is more of the same. There will be drama, tear-gas, arrests, treason-charges, open bribes, voter-tourism, pre-ticked ballots and so on. That is just part the nightmare called elections. There will be deflections from the various parties, there will be people jumping around after the man of the day. However, in the long run, as it is per today. No one will contain of have access to the powers of the army and state resources like Museveni. From the State House, he will micro-manage and bustle everyone into his ways. Either you like it or not.

That is why, when I read people speculating about the elections in 2021. There will be the same Kiggundu Math and misuse of Public Order Management Act (POMA) until oblivion. Unless, the people are gathered around the cause. That they have belief that they have value and purpose. That they are not pawns of the Kingpin of Entebbe and the NRA. As long as they have faith that they can steer the conversation. That they can change the narrative, change the perspective and also ensure that the military, the Security Organization in and around the President are weaken by the pressure. If that pressure gets to level they cannot sustain. Than, the movement, the people are able to progress and show, who is the true value in the Republic.

That will not easy, that will cost. The road to redemption and freedom isn’t easy. It never has been. Because the men with power and wealth, usually don’t won’t to hand it out, but you have to fight to get it. That is the way it is.

At this present time, there are little hope, there are reflections of awaking. As it has been in the past. But the fire has to flair. The thunder has hit the ground. It has to spark,. The fire has to light and it has to be able to make a difference. Show true value. Not being one concert. Being one idol, one leader and one movement. But being the message, being the guiding star, the one that can pass through the evils of men. That is what is needed. Not just some mere slogan and a color of clothing. It needs to pierce the flesh and embody people.

There been sparks, there been flairs, but not fires that has overpowered. There haven’t been a people’s revolution. There been starts of riots and uprisings. But not to an extent, where the thousands of guards, the soldiers and the police force has felt threaten. Where they have felt that their arms and guns been made out of jelly. They haven’t feared going to the office or the station, they haven’t feared going to the barracks.

No, its the people who has feared mambas, the flying squad, the ISO, the Special Force Command and whatnot beating people on the streets. These has to fear something. Not that the public has arms, but their anger, their frustration, their fatigue, their lack of hope and desperation. As they haven’t seen the dream of the NRM or the President. They haven’t gotten the 10 Point Program or the Future their was promised for three decades.

We can speak up again and again about the unjust of the system, but seemingly more of it stays the same. While the crooks continuing taking, while the ones risking it all are paying the price. Without any big change or will to do so. Only, to scream and shout, but kill it off when the dust settles. Peace.