I don’t know what is happening with King Ronald Edward Frederick Kimera Muwenda Mutebi II, the reigning Kabaka of the Kingdom of Buganda. On the 13th April the King was seen by the general public and the Baganda celebrated the 66th Birthday of the King. He was clearly not well and in a worrying condition.

Today, the Royal Family issued and statement and the New Vision reported:

“In a statement issued Wednesday, siblings to the Kabaka, without offering details of his health condition, said that whereas he has been unwell, he is responding to treatment very well. “Ssabasajja (Kabaka) has been unwell for a while. However, he has responded well to the prescribed medication and his medical team is positive about his prognosis,” they said” (New Vision – ‘Kabaka unwell – Royal family’ 14.04.2021).

Katikkiro Charles Peter Mayiga should petition the state and ensure the safety of the Kabaka bwa Buganda who needs health care and treatment. That he feels unwell and seemingly looks weak. He does need health care. The Royal Family is saying his getting better, but his looking frail.

What is striking is that Bebe Cool aka Moses Ssali ranted after the birthday was really unique in a way. Especially for someone who is promoting and standing by the regime. His an vocal apologist and always standing by the government. Still, at this point and for the favour of the King. He had no trouble saying the Health Care in Uganda sucks. So, everyone who is an VIP and High Ranking Official should do Medical Tourism. Instead of trusting the treatment and healing at local hospitals. That really says a lot.

A regime apologist and a voice of the government. Bebe Cool says the rich and well-off is supposed to get treatment and healing from their sicknesses abroad. By saying that… his dismissing the doctors, hospitals and the health care in the Republic. That’s because he says the King needs to do this abroad. We know that the high ranking officials in the NRM have done this and opposition leaders are doing it too. They are going to the U.S., India or Nairobi to get help. That shows the state has failed Ministry of Health and its Hospitals. When this is what you say.

Yes, Kabaka seems weak and frail. It is up to the Kingdom and the Royal Family what to do. It is up to the state, if it would facilitate or help the King to get treatment on the outside of the Republic. The Katikkiro should ask or even try to through the political channels and even try to get something out of the State House.

It is natural to feel sorry for the King. He deserves to get the right treatment. I will not speculate into how he got there and what’s the reason. That is beyond me. However, this situation only shows the problems of the state and how it doesn’t take care of its citizens. The King isn’t just a high ranking official and a cultural leader, his also a citizen who deserves health care like everyone else. If it isn’t working for him it cannot work well for everyone else either.

Bebe Cool is maybe right, but at the same time his wrong. It shouldn’t be a necessity to go abroad to get help. That should first happen at home, but the state haven’t prioritised this and that’s why they need to do this in the first place.

This is a detriment to all the years of the NRM. That they cannot help its own and hasn’t the capacity to properly help the King. This means they cannot help the average citizen either. When a VIP like the Kabaka doesn’t get the treatment he really needs. Even the likes of Bebe Cool says so and his a voice of the state. His usually on the barricades for this regime and wants to spread their message. That’s why you know the state has failed. When a guy like him says this. Peace. 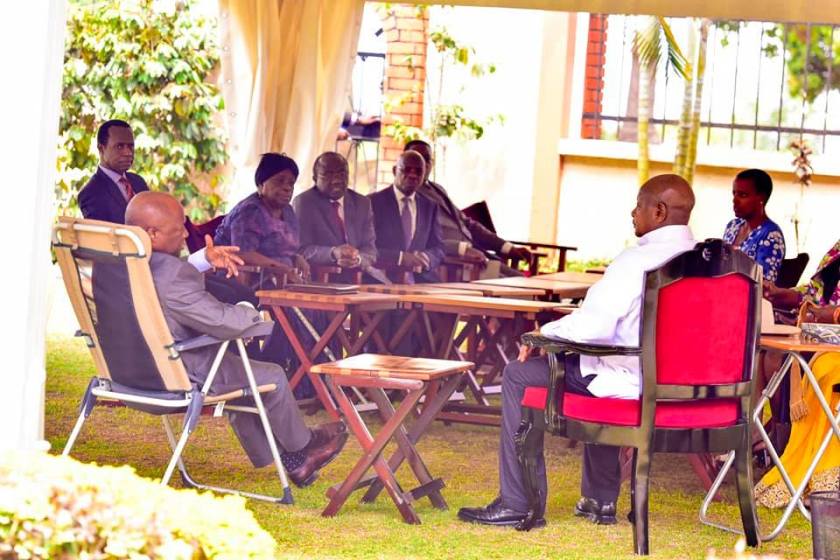 “Rumors are ripe that am going to be appointed VP; that that’s the reason Pres M7 was hosted by Kabaka Mutebi at Banda Palace so the President might brief the King. I am not the next VP. Iam carrying out my duties as entrusted to me by the Kabaka. I don’t do under table deals. CPM” (Charles Peter Mayiga, 11.02.2019).

Katikkiro Charles Peter Mayiga has shown finesse and also strength. There been speculations in what was happening within the meeting between Kabaka Ronald Muwenda Mutebi II and President Yoweri Kaguta Museveni. The meeting was held this 5th February 2019, it is seen as event , that is happening because of the upcoming General Election in 2021. As the President wants to ensure all his allies are with him and that powerful ones on his side. This is typical him, as he offers money, pledge land-back and whatever else. As it is a trade for loyalty.

Therefore, there are known of some financial implications of the meetings, as the grievances of the theft of Kingdom’s land and other aspects. Has made the President work hasty, as he wants to settle it and look good in the eyes of the Kingdom. Yoweri wants Ronald to not be a voice or renegade against him. Since, he is one who gotten his place back because of him and also his lost titles. If not compensation of the lost land titles. That is if, the NRM and the Ministry of Finance can find the funds to do so.

Whatever this shows is the way that the government manoeuvrer in the time before an election. Try to reign in all, to get all the ducks in a row and make the roads shine. In the meantime, the President can let everything go and eat. While right before an election, he needs to show effort and let other get some scraps too.

What has been special is the rumours and promise of giving the Buganda Prime Minister or Katikkiro Mayiga the role as Vice-President beneath himself. That the President might appoint him, as a token of loyalty to the Kingdom, as the special place it has in the Republic.

If the Katikkiro would get this role, he would be sort of like King Freddie, who was President between October 9, 1962 to March 2, 1966. By all means, King Freddie had actual power in his office as President and King. While, the Katikkiro would be a noble-men, with a high-office, but we all know. That Vice-President Edward Ssekandi is an important as a grape-fruit. He is a nice trophy, but not something you take utter seriously or of vast importance. There are usually more swagger in the Prime Ministers, that the President has appointed. Therefore, the Katikkiro would be a big-man with a office, but not doing anything profound. Because, when did Ssekandi do something magnificent or revolutionary, did something or said something that was worth damn? Well, that never happen. The same would be the role of the Katikkiro.

Katikkiro would play second fiddle and be one of the cronies within the administration of Museveni. He would be nothing else. So, if this was offered to him, it would have been done to show loyalty to the Kingdom and the King. As his men would be directly in the sphere of power. As the President needs the support of this, as the President knows the growing dissidents within the Kingdom against him. The opposition and the ones behind Robert Kyagulanyi aka Bobi Wine are from this. Therefore, it would been a smart move of the President. He is conning enough to do this.

What we can take from this, that the Kabaka has a loyal servant, who he has appointed and the President got snubbed. Peace.

Mission accomplished! We are proud to add to our stable of world-class brands, Ngule- a high quality and affordable beer, brewed in partnership with Buganda Kingdom. Brewed from local ingredients i.e cassava, sorghum and water, Ngule is yet another example of how our business creates sustainable growth and development of local communities through fostering an enterprise culture throughout our value chain and sourcing from local businesses that in turn creates jobs and uplifts household incomes.