If the Deputy President William Ruto was surer of proof of leading and delivering results in the Jubilee government, except if the Jubilee government would see their share of international loans to fill the fiscal funding of the running expenses. Because very few of the promises in the last election has been uphold as the doctors are on strike, running scandals of corruption and issues with the army in Somalia. It is not like the government looks like a well-run machine without any defaults.

Therefore his retort of the news of the official launch of NASA says a lot of the man:

“He said that unlike the Jubilee Party, which he said is keen on developing the country and had the interests of Kenyans at heart, Nasa is only keen on sharing positions” (…) “The difference between Jubilee and the opposition is as clear as day and night. While Jubilee is for [the] development of the country, our competitors are only good [at] empty rhetoric and organising demonstrations,” he said” (Barasa, 2017).

So the reality of the matter is that CORD or NASA has demonstrated and heavy, but it wouldn’t be needed if the Kenyan Government or the Jubilee had showed other ways of expressing their dialogue. This coming from a government official, that needed guards, so they could close the session of amending the electoral laws before this coming election.

DP Ruto is forgetting how he came to power together with President Uhuru Kenyatta. Instead he has to shuffle dirt on the NASA alliance, because he knows that if you just start to dig the surface of the achievement under the Jubilee Alliance you will find skeletons of cartels, mafia and even deep big-corruption. That is been showed too often, that even ghost companies cleaning the Jomo Kenyatta International Airport (JKIA) is an ordinary scandal and not shocking. It would be shocking if the existence of all corporations and agreements between the state and private was actually clean.

There are too many players feeding of the state funds and the borrowed fiscal cash during the Jubilee government. That is well-known and should be that easy to state, but it is it. Like a fish out of water to say it is differently. The Jubilee have thrived on the funds and even groomed the businesses owned by government officials. They haven’t been building stronger institutions, but instead looked for ways to elevate funds out of state coffers. To find honest working key state officials is close to finding penguins in Eldoret or Mombasa. Good luck on your duck-hunt!

That Deputy President Ruto has grievances with Cord/NASA is understandable as they have demonstrated and swayed government on the IEBC and other positions. That must hurt the pride of the head honcho of the prominence of Ruto. Ruto cannot hold his own mantle and shed light on the promises of 2013 as that would hit the people of the significant lacking deliverance of his alliance and parties. The only thing they have done is to keep the upkeep of the alliance and not done anything close to their mountains of promises.

Therefore he has to sigh the utter words of the only point of NASA is the dream of “Power”, the power and reign that is kept by his people, that Power that Ruto and his cliché want to keep by any means. Therefore throwing shade from the glorious place and from the high-power place seems a bit of a stretch. If it was a CSO or a think-tank addressing it, it would be more significant and more of honest approach, but seems Jubilee and NASA are two of the same coin. The one running the ship and the other hoping to take over!

Seems a bit wrong that the Deputy President William Ruto fears the NASA and their only wish is the reach of power, not to govern or do better job than the Jubilee. As Jubilee we’re supposed to do a better job than Mwai Kibaki, therefore the trying of Cord last time was weaken by circumstances.

Therefore, Ruto and his comrades better smarten up, they are high up in the sky and could easily be taken down. Though by they having power they can lose an election if the Cord/NASA shed real lights on the matter and on the scandals. That they go all out and share the information and paperwork on the issues. If so the Jubilee better think twice before they blink twice. Since Deputy Ruto in power should fiercely shed lights on what he has achieved.

So instead of giving blame to NASA, Ruto should show the perspective of their work instead of telling of CORD/NASA before they even said ‘hello’. The reality of the matter and of the justification is not there, as the man targeting the alliance, NASA, shouldn’t be the focus of Jubilee. Jubilee should be better, but you cannot expect anything else. Since the Jubilee has more focused on eating, than actually delivering! Peace. 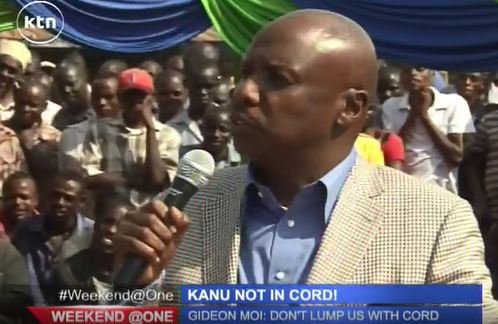 The new-born fresh party Jubilee Party and their marketing team has open wound after the signalled agreement between Kenya African National Union (KANU) party that even President Uhuru Kenyatta was the chairman of at one point. This is the party that is now lead by the son of former President Daniel Arap Moi, which is still not pivotal and important in the political landscape. So Gideon Moi and Nick Salat fate is in the hands of who they are vouching for.

Gideon Moi is living his father’s name his and his reputation, as the KANU still has suction. Therefore the meeting in Kabarak between Kenyatta and Moi, shows the fragmented and the way of buying in deals to hopefully gain a bigger piece of the pie in the coming election. So for Jubilee to have a wider and broader base, they are even trading ministerial posts to KANU ministers as well, as the ones who are stalwart candidates in the Jubilee, as the coalition went from a dozen parties into one. Certainly some must feel left behind in the trade-off as the KANU will gain more power with little effort, as Kenyatta sold some slots to Gideon Moi and Nick Salat.

Even Kenyatta wrote this himself on his position in April 2012: “I also made it clear to the KANU NEC that it is my desire to seek elective office in the coming general election. As a result, and in compliance with the new Constitution and the Political Parties Act that no State officer can hold a party position, I will, therefore, not seek any position in Kanu. It is thus incumbent upon the Secretary-General, as mandated by the NEC meeting at Naivasha last December, to ensure that Kenya’s mother party complies. I have twice called the National Delegates Conference, but called them off because of sideshows instigated by the Secretary-General, who has been an obstacle to the process of compliance. He must understand that his or others’ ambition in the party can only be achieved if the party complies with the law” (Kenyatta, 12.04.2012). 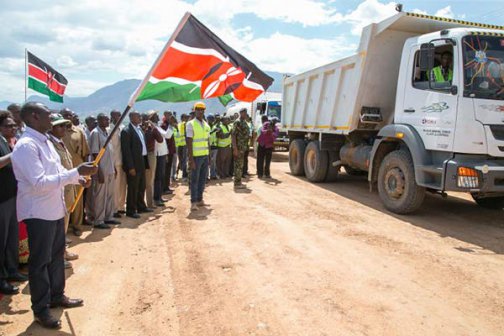 So he is well aware of the party and their stakeholders, as he knows the legal terms of the party and their ways of dealing with candidates, as he himself was MP in the KANU party. Deputy President William Ruto must feel the challenge of his future, when the presence of the KANU clan arrives to the plate. Some thought that Gideon Moi was going to NASA, but that was certainly only to scare Kenyatta from having the Rift Valley voters in the bag. A certainty of this is needed for a second term of the Jubilee Alliance Party.

The questions remain if the Jubilee really tried to get Wiper Democratic Movement (WDM) Stephen Kalonzo Musyoka as the NASA/Cord still haven’t picked their Presidential Flag-Bearer, and wants to stop the progress of the opposition. We have also heard rumors that the Jubilee Alliance party have tried to drag in the Amani National Congress (ANC) Musalia Mudavadi to the National Party. So you know that Jubilee will offer anything to stop the alliance and the coalition of the opposition.

Jubilee under Kenyatta and Ruto has been through storms, created massive frauds and stolen funds like none before, as well as the state borrowed more funds to fix the budgets. Therefore the Kenyan state isn’t as strong as it should be. Also, they we’re also supporting the Presidential bid of Museveni, without getting his nod to build petroleum pipeline from Lake Albert basin to Lamu port. So the Kenyan government has also suffered their big risks without getting rewards.

So now the old dynasties are resurfacing with the Kenyatta and Moi collaborations. We can now see the DP Ruto is shadowed by the KANU ministers and candidates. William Ruto, the stubborn leader will not say this himself, but he should not like after the sealed agreement between 13 parties, that a fourteenth gets the front-seat without the negotiations. That must hurt the pride of the former leader of United Republican Party (URP). However, Ruto must feel a sting in his pride when knowing that Kenyatta went to trade favours with former President Moi.

That the Kabarak meetings were occurring and Jubilee trading places to safely securing votes of some districts before August. This even comes from the reliable blogger Robert Alai Onyango: “Jubilee scheming to replace Ruto with Gideon Moi. Moi has instructed Gideon Moi to do all he can to stop Ruto. Mama Ngina also met Moi to find ways of stopping Ruto. The politics is getting interesting and might see some realignments” (…) “But the schemers really fear that Ruto’s fight-back might be ruthless. Ruto’s camp not happy. Things are thick!!!” (Robert Alai Onyango, 19.02.2017).

So if this is true, the issues between the Ruto and Kenyatta will surface, as well as the mediator Moi will tangle in-between. Certainly the trade-off between Jubilee and Daniel Arap Moi servers them both; Ruto if he wants to keep his friendship and has put his all in the Jubilee, has to live in the midst of the Kenyatta and Moi dynasty. Ruto can still be power player and will be inside the midst of ruling regime. Jubilee are running and they cannot all of sudden change his position, but for 2022 there now will be a KANU leader wanting to throw shade, as Kenyatta second term would be over. Even as NASA/Cord tries to intervene and tries to challenge, you can put doubt, when Gideon has tried the waters and still played the cards for Jubilee.

As Gideon wrote in January 2017: “However, the remarks made by Hon. Nick Salat, the Secretary General of KANU today at the Bomas of Kenya are his personal sentiments and do not reflect in any way the position of the party on the matter of an election coalition at this juncture” (…) “KANU policies and decisions are guided by the party’s constitution which stipulates that such a decision must first be discussed by the supreme decision making organ of the party, the National Delegates Conference (NDC) upon a resolution” (KANU, 11.01.2017).

Still we can now know that Daniel Arap Moi still has suction and still will use his political game-plan to still have his family in power, by any means and by supporting the family that gave him power as well. So the Kenyan politics is still filled with the men and woman, of the ones that was involved in the liberation of state from United Kingdom. Therefore we are speaking about Kenyatta and Moi, while Odinga is side-lined by the KANU yet again, just like his father back-in-day. Peace.