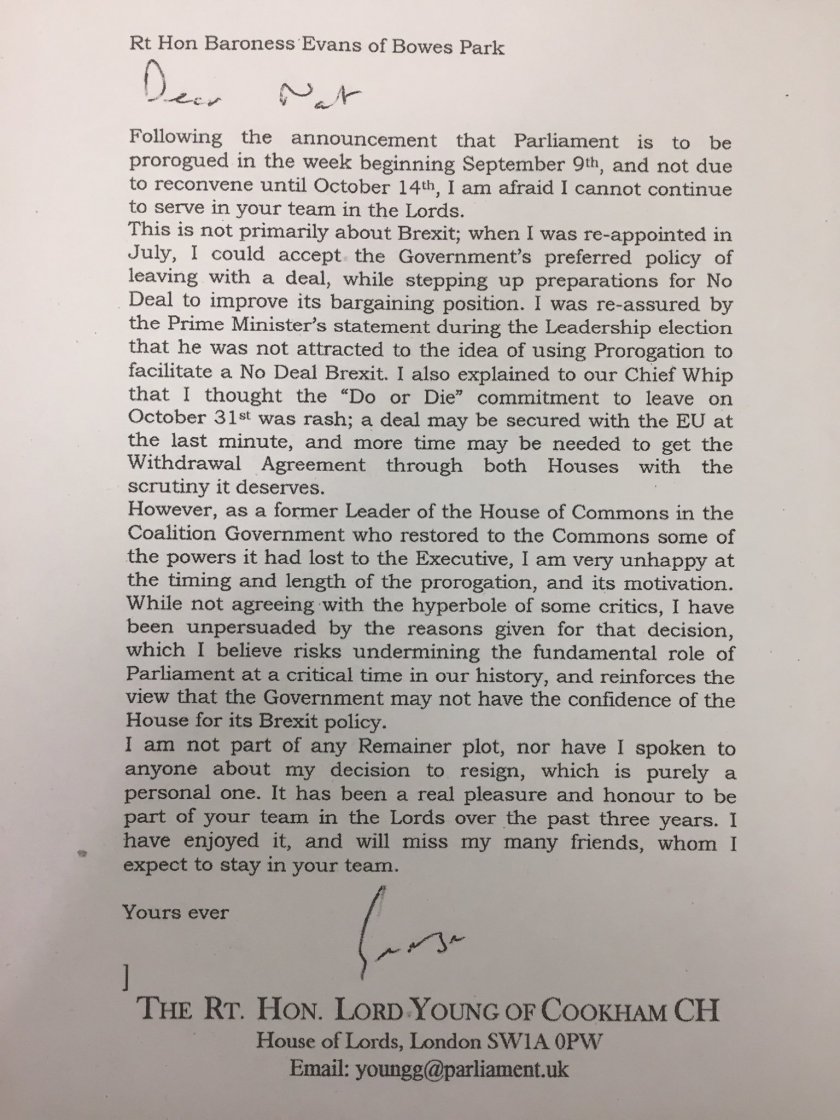 Let’s be clear, this the art-piece of a con-artist. Michelangelo or Basquiat couldn’t have this masterpiece of deception. It is only a CONservative Prime Minister like Boris Johnson who could.

Today, his shown his clear intention. The man who was never elected by the people, to disregard all the people’s representatives and their constituencies. That in the final days Brexit, until the 31st October 2019. The Parliament is suspended the 14th October 2019. Making it near impossible to amend changes or follow standard protocol of Parliament and its chambers.

This is the trick that Johnson does today. With the blessing of the Queen and his Privy Council, while his made his remarks in constitutional offensive letter, earlier in the day. Because, clearly, the coward doesn’t have the bollocks or the balls to be present in-front of fellow peers. His a weak man, who only can use power, but stand guard to be questioned for using it. That is the sort of man Johnson is.

If he had courage, honour or respect for the democratic institutions in the United Kingdom. He would have started the Parliament after the Summer Recess and finally ended Brexit with humility. Alas, he wants to wing-it and disregard the rest of the representatives of the UK. He want to move-on at his own will and not get quarrels in Parliament. At least his predecessor had the courtesy to follow protocol in this matter.

That they supposed to “divers urgent and important matters” when they return. Like they got the time for Parliament to convene and find deliberate actions concerning Brexit. This is clear message, that Johnson want to skirmish his “No-Deal” without the procedures followed.

Boris is showing lack of understanding his role, because his not representing the people, but his own will. Johnson takes this step, since he fears what the Parliament could do. The hung parliament have already caused problems for the transitional deal, the Withdrawal Agreement and not like Johnson has the time to fix the issues within that one. Neither, is he giving anyone time to make good suggestions ahead of the revoking date of the Member State role within the European Union.

He wants to end this with a blast, with a big-bang, where the corporations are more prepared to remove locations and assets into the EU markets. This has already been done big funds and corporations already, Dublin is the winner and many plans to move to the Netherlands too.

Certainly, Brexit deserves to questioned, under scrutiny and handled properly by the Parliament. Not be done in silence and secretly by the chosen few of the PM. Instead it seems to be the way, as the Queen, the Prime Minister and the Privy Council got it done today.

This shows how someone is ramming into the institutions on his own will, instead of actually having an ear to the other MPs and Lords, also they are there on behalf of the people. That is why this sort of actions shows his contempt with the other legislators.

Johnson is a COWARD. A weak man, with a high office. Not a respectable or an honourable man. Because, if he was, he would have the ability to listen to people and accepts their verdicts of your plans. Instead, he wants to be the big-man writing decrees and get t done his way. This is the sort of man he is.

Since we all know, there will not be much time between 14th October and 31st October 2019. 17 days and you cannot manage much.

That why this is crashing out of the Union, in a mediocre and insincere way of Johnson. Boris the Blade, surely forgotten his role in society and what institution his a part off. Peace. 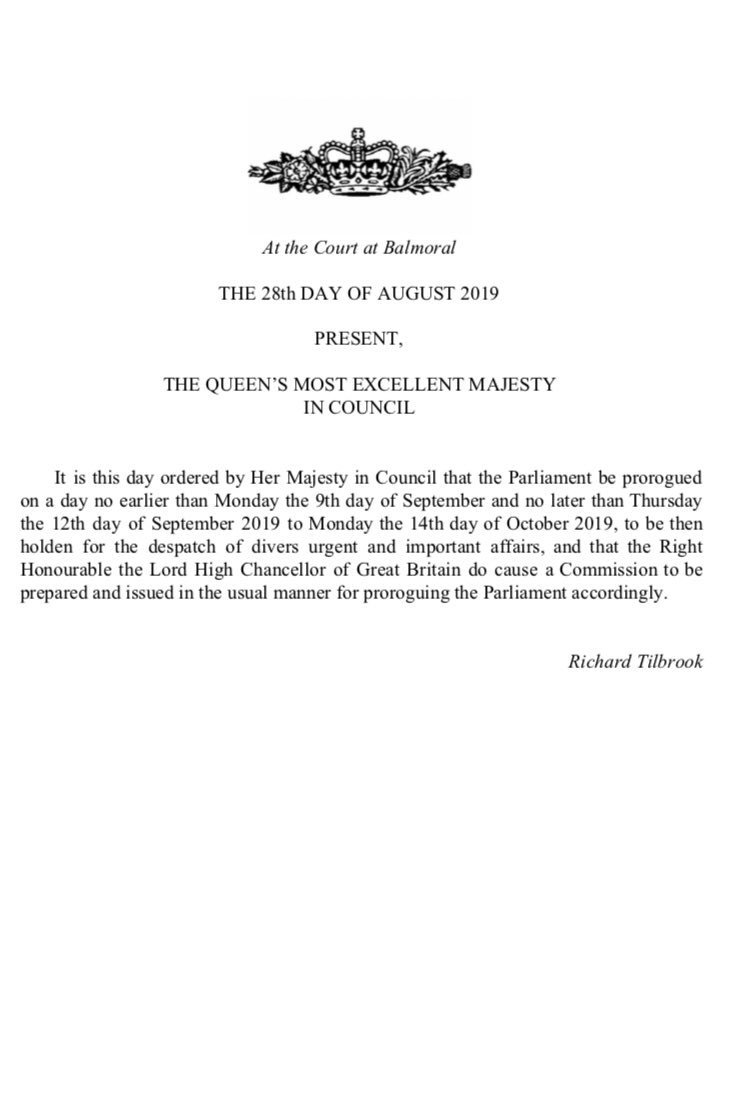 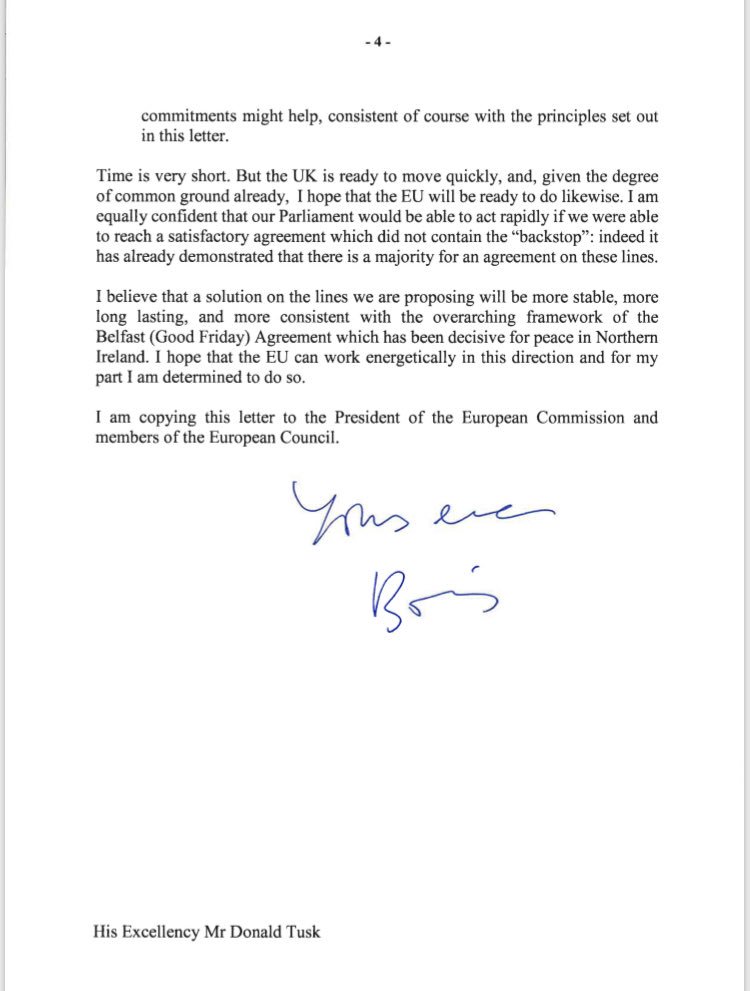 The British doesn’t like their government to care of their interest. The British are preoccupied with a government not shield the public, but saving their own careers. The Tories and Prime Minister Boris Johnson is busy-bodies, trying to sell a “No-Deal” as the offer and the gateway out of the European Union Membership. Without considering the implications or the costs of doing so.

PM Johnson is going for a train-crash and saying “jolly ho”. There is like a oblivious approach to the end-game of Brexit. It is like they think they can damage the partnership, the border-trade, the lack of protocol and the significance of becoming a third-country state towards the EU. There is no well planned aftermath, just damage-control. The damage-control in a sense of trying to spin the news and not tell the true hurt of the possible No-Deal.

The Operation Yellowhammer wasn’t a pipe-dream. It is the real affect of the No-Deal. The lack of procedure, preparedness or even delivery for the imports and exports of goods. Will ensure that the transfer of funds, the costs of living and the lack of checks, will in the make things harder. Because, the state and businesses are not ready for the 31st October 2019. Even if the state has had all the years plus the bonus given previous PM May. The Tories have squandered the time without offering any solace.

“Speaking after signing the legislation that will crystallise in law the upcoming repeal of the ECA, the Secretary of State for Exiting the EU Steve Barclay said: “This is a clear signal to the people of this country that there is no turning back – we are leaving the EU as promised on October 31, whatever the circumstances – delivering on the instructions given to us in 2016“ (…) “That is what we are doing by setting in motion that repeal. This is a landmark moment in taking back control of our laws from Brussels” (Department for Exiting the European Union – ‘Brexit Secretary signs order to scrap 1972 Brussels Act – ending all EU law in the UK’ 18.08.2019).

With that in mind, lets show one vital provision from the repealed law in question.

“(2) Subject to Schedule 2 to this Act, at any time after its passing Her Majesty may by Order in Council, and any designated Minister or department may [F2by order, rules, regulations or scheme] , make provision—

(b) for the purpose of dealing with matters arising out of or related to any such obligation or rights or the coming into force, or the operation from time to time, of subsection (1) above”.

It is okay and within all common sense, that the Tories, the HM Government or the United Kingdom doesn’t want to directly comply or follow the legislation of Brussels past the membership of the EU. However, what they are doing is more significant in the ways. That instead of following the EU and their standards. The UK are planning to make it all on their own. Meaning, the EU standards and UK standards will differ; An in the end, the parties will have to find a way to find a middle-ground. Nevertheless, that will not be overnight, neither will the UK be able to overpower or get the 26 Member-states to follow a single outside unit. That is what will happen.

Instead of being another state who follows and who does as the legislators does in Brussels, which is made in tandem with all member-states. The UK will be an outside sovereign, who has to by no means to follow the EU. However, if they want to trade with the EU, like everyone else. They have to comply to their standards and the ideals of the free-trading paradigm it has set forth.

The repeal of this law is a clear sign, not a hogwash statement. But a proof of the intent and the sudden sign of a “no-deal” as the only remedy out. That means the lack of legislation and follow-up on the codes from Brussels. Will later make it harder for the trading partners, the exporters and also the ones doing financial transactions to comply with current legislation in the EU.

This means, they will be outsiders, who will not part-take in the statutes, legislation and codes made in the EU. Which is all natural, but by doing so, they will not get the perks as in the past. Even if the Tories sometimes sounds like they can both have cake and eat it. Peace.