Archive for the tag “Jubaland”

“Our young people think about nothing more than love affairs and pleasure. They spend more time attempting to seduce and dishonor young women than in thinking about their country’s welfare. Our women, in order to take care of the house and family of God, forget their own. Our men limit their activities to vice and their heroics to shameful acts. Children wake up in a fog of routine, adolescents live out their best years without ideals, and their elders are sterile, and only serve to corrupt our young people by their example.” – José Rizal, Noli Me Tángere

Pardon my French, but no sane person or collective, even organizations and governments really lose millions upon millions of dollars. They are spending it and hiding the recites. It is that simple. It isn’t like a pseudo-science or science fiction for that matter. It is just blatant misuse of funds and trying to covering up the tracks that are left behind. Because, suddenly without any effort, the money just vanish.

I understand when people are losing small change, some shillings, some notes of a certain value. Nevertheless, not in the millions. Neither the sudden lack of effort of not explaining how it went. Because this amounts of money doesn’t evaporate or go bad as old food. It is cash money and when it is gone, it is because it is spent on something.

“The Somalia Parliamentary Committee on Finance and Budget has released a new statement alleging mismanagement of funds at the Ministry of Finance. In the report, it was revealed that about $42M is unaccounted for and the Finance Ministry headed by Minister Abdirahman Beilleh, has not been able to provide any reason or explanation on how the funds ‘disappeared’. Of the funds unaccounted for is $20 million which is part of a $50 million budgetary support from Saudi Arabia granted to the Somalia government in the year 2017 According to the report the funds have not been indicated in the 2018 budget” (Hiiraan Online – ‘$42M Missing from Somalia’s Ministry of Finance Accounts’ 22.11.2018).

This stories are getting old on me, the knowledge that the ones on high, the ones above the Ministry of Finance. Most likely knows the deals and arrangements, but they are untouchable, they have traded these funds and siphoned them to their side-projects or even side-dishes for that matter. Who knows, if they have entities abroad outside Mogadishu and Somalia. They might have investments in Kampala, Addis Ababa or even Nairobi.

This money can flied anywhere and to anyone. As the Ministry of Finance has no proof, no bill or no transactions paper to protocol the spending. That is lax financial control and should make both the International Monetary Fund (IMF) and the World Bank (WB), very very proud!

However, this is a proof of how the Villa Somalia is spending money like there is no tomorrow. Surely, the President Farmaajo and Prime Minister Kheire knows where these funds has gone. However, hey will not confess. They will not drop an LP like Usher with their confessions and tell their stories of cheating. Even if it would have been healthy, because their recordings are valued about $42m USD, I am no fat-cat, but that is good money. You can buy a lot of property and own big-businesses with that sort of cash-flow. No doubt. Peace.

Somalia: “Re: Bid Rounds, new contracts (PSA) and legacy petroleum contracts – the way forward for the national interest of Somalia” (18.11.2018) 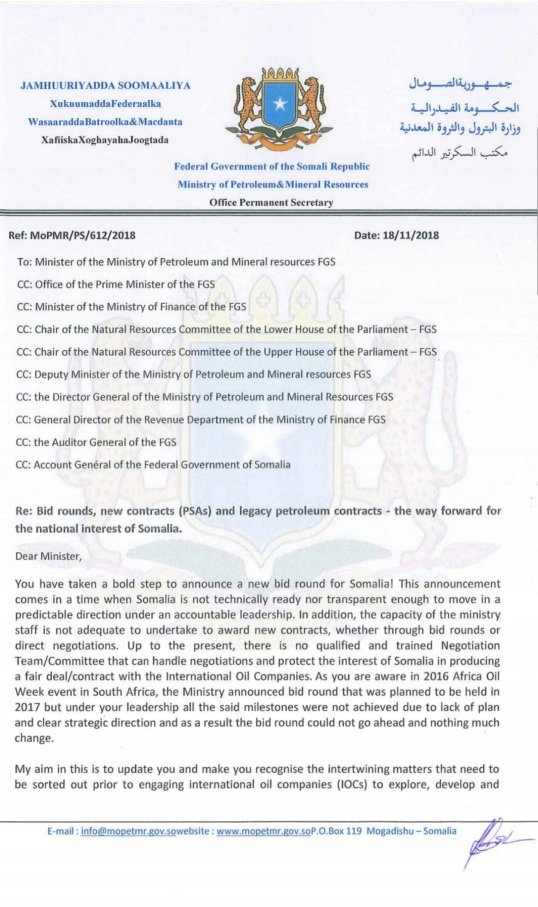 Somalia: A Joint Statement by Southwest Scholars, and Civil Society Leaders Regarding Direct Meddling in the Southwest State Electoral Process (07.11.2018) 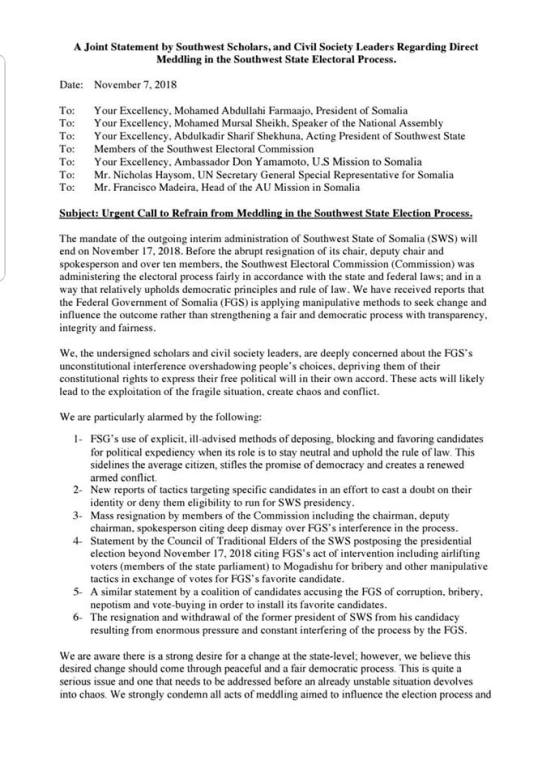 The events unfolding in the last few days, including the divisions among the stakeholders, ahead of the upcoming presidential election in Somalia’s South West State, have the potential to lead to violence. The United Nations Mission in Somalia (UNSOM) calls on all parties and stakeholders to work together to ensure that this Somali-owned electoral process proceeds in accordance with the established rules and avoids any behaviour which may lead to conflict or undermine the integrity of the electoral process.

“With this election being the first in a series to be held around the country – both at the regional level next year and national level in 2020 – there is a real need to set the precedent for credible and peaceful electoral processes,” said the UN Secretary-General’s Special Representative for Somalia, Nicholas Haysom. “I note that Somalia’s international partners had expressed similar hopes and concerns in November 2016 during the country’s federal parliamentary elections, when it called on all stakeholders to collaborate in ensuring a positive outcome.”

“I am confident that, in keeping with their tradition, Somali leaders will find a solution, through dialogue, to the issues surrounding this electoral process. An electoral process that is transparent, enjoys broad consensus on the rules governing its conduct, and is free from irregularities can only promote widespread acceptance of the results, and avoid violent confrontations at or after polling,” added Mr. Haysom, who also serves as UNSOM’s head.

The regional assembly of South West State is due to hold a presidential election on 17 November. Similar votes will take place in the Federal Member States of Puntland and Jubaland in 2019.

The United Nations Assistance Mission in Somalia (UNSOM) condemns the obstruction and attack on a convoy of UN vehicles that occurred along the road between the cities of Galkayo and Adaado in Galmudug state on Saturday, 3 November.

The convoy was accompanied by a dozen police officers from South Galkayo in the late afternoon of Saturday when it was stopped some five kilometres outside Adaado at a checkpoint manned by eight men claiming to be police officers. None of the individuals wore police uniforms, but they refused to grant passage to the convoy that was carrying a team of UN personnel assigned to make preparations for an upcoming visit to Dhusamarreb by UN officials.

After the UN officials decided to abort the mission and head back to Galkayo, a truck carrying  militiamen drove through the checkpoint and opened fire on the UN convoy. None of the members of the convoy was injured nor were any of the UN vehicles damaged in the shooting incident.

“Last week’s attack on a UN convoy is unacceptable, and we call on the authorities in Galmudug state and the Federal Government to  hold accountable those militiamen who opened fire on our colleagues. Such an attack has not happened to the UN in Somalia for a very long time.” said the UN Secretary-General’s Special Representative for Somalia, Nicholas Haysom. “United Nations personnel must be granted free passage throughout Somalia at all times. They must be able to implement the mandates of UNSOM and UN agencies, funds and programmes without running the risk of being fired upon for no justifiable reason.”

Somalia: Need for peaceful resolution in Tukaraq among topics UN envoy discussed in visit to Puntland and Somaliland (04.11.2018)

The United Nations envoy to Somalia today wrapped up a two-day visit which took him to Puntland and Somaliland, where he met their leaders and discussed a range of issues – including the need for a peaceful resolution of the conflict in the Tukaraq area of the contested Sool region which lies between them.

“I had the opportunity to discuss with the president the recent changes in the region, the challenges facing Somaliland and of course, in that regard, we touched on the conflict in Tukaraq,” he said. “In particular, how that conflict can be managed to avoid any conflagration, any irruption of hostilities in the short term, and a long-term solution for that conflict.”

“Here in Somaliland we got a sense of the impact of the changes in the region and what that meant for the challenges facing Somaliland,” Mr. Haysom added. “And, of course, [we got] to discuss the Somaliland-Somalia relations.”

The UN official also met with a group of Somaliland civil society representatives and parliamentarians, who provided him with an overview of challenges and achievements in recent years regarding political, electoral and security issues.

On Saturday, Mr. Haysom had been in Garowe, the capital of neighbouring Puntland, where he met with its President Abdiweli Mohamed Ali ‘Gaas.’

As with Somaliland’s leader, the need for maintaining peace in Tukaraq, where forces from Puntland and Somaliland have clashed in recent months, was a topic of discussion.

They also discussed how to improve relations between the Federal Government of Somalia and the country’s Federal Member States, in light of recent political tensions.

“We looked at the ways in which both levels of government in Somalia can work together to achieve what Somalis want, which is peace and prosperity,” the UN official said, adding that the visit was an “important opportunity to underline that for Somalia to succeed everyone needs to work in the same direction.” 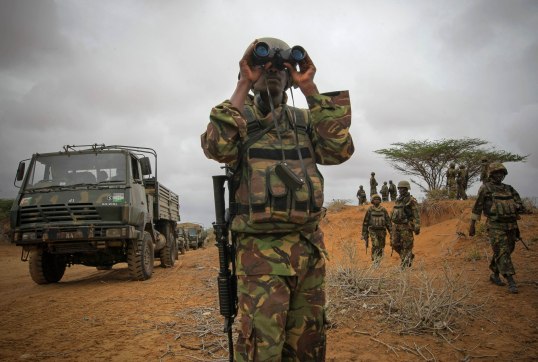 UK, Somalia, Italy and Ethiopia bring together international partners in support of Somalia’s security, political and economic reforms on 27 September 2018.

Minister Baldwin praised the bravery and positive impact of African Union Mission in Somalia (AMISOM) troops and the Somali forces who are fighting against Al Shabaab and restoring stability to the country. She emphasised the importance of a successful transition of responsibility for Somalia’s security to its own forces. A rushed withdrawal, without sustainable and predictable funding in place, would jeopardise the fragile progress made over recent years.

During her visit to Kenya (30 August 2018), the Prime Minister announced over £7m of additional funding to support AMISOM’s work. She called on the international community to join the UK in providing additional funding to AMISOM to ensure it was sufficiently funded to deliver a successful security transition.

“Somalia has a real chance for a better future. One that allows its people to flourish, provides no space for terrorist groups, and contributes to regional stability. Helping to build that future must be a truly international effort. Today I am calling on Somalia’s friends to contribute to ensure sustainable funding for AMISOM.”

“The Federal Government of Somalia remains committed to implementing the key political, economic and security reforms that will help Somalia emerge from the many difficult years it has experienced. The support of the international community has been vital to Somalia thus far. We look forward to continued engagement and support with our international partners as we advance our reform agenda and the transfer of responsibility for Somalia’s security from AMISOM to Somali security forces.”

The UK is a leading partner for Somalia, and the second largest bilateral donor. This financial year, the UK will provide approximately £313m of support to Somalia, contributing to the country’s stability and helping to make a tangible difference to the lives of its poorest and most vulnerable people.

During her recent visit to Kenya, Prime Minister May announced additional funding for Somalia. Over £25m will support Somalia’s efforts to build a stable and democratic political system, including future one-person-one-vote elections. Further funding of over £60m will provide lifesaving food, clean water and medicine, along with support to find stable jobs, to help over a million people cope with and recover from the impact of conflict and drought.