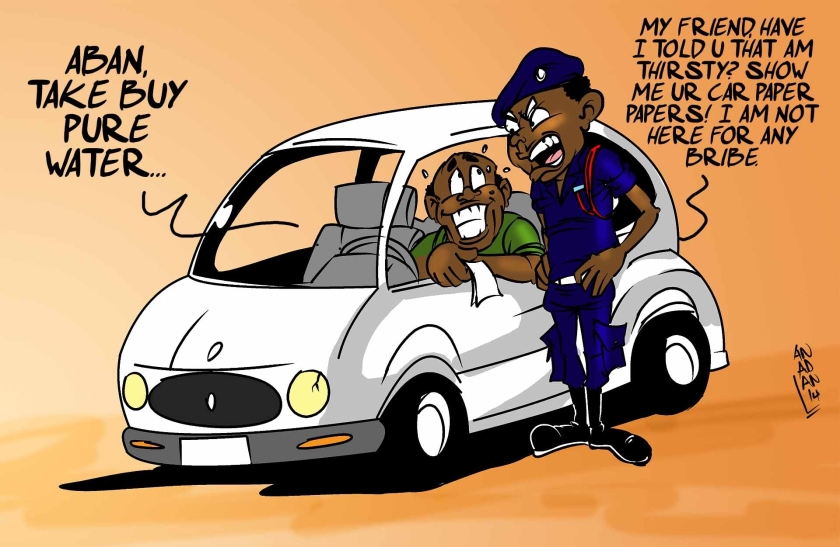 “There is nothing like a free lunch” – Milton Friedman.

Corruption! A long word I have written about for ages and it doesn’t stop. Milton Friedman is right there isn’t nothing like a free lunch. You can get kickbacks, but it’s still not right because it’s not fair, not just and not the way of dealing as a civil servant or as a business person to get a better life or deal. That is what these corruption cases are about from the Netherland, Singapore, Taiwan, and Montana in U.S.A., also Estonia and Zambia. There is all the different kinds of lunches. An all of them have been eating though one company won’t take the risk so they pull out of a market till the last story where Bishop Mambo in Zambia is telling that there is corruption in the Church. Surely their churches, the church-coffee after service must be sweetened by something stronger then sugar.

In the Netherlands the Dutch Staffing Company Brunel has pulled out its operations in Nigeria because of corruption their Chief Executive Jan Arie Van Barneveld says: “The security risk and bureaucracy make it almost impossible to guarantee the quality of our services and the safety of our workers in Nigeria in the future” (…)”If it is actually impossible to do business without breaking the rules and putting our staff in physical danger, then I’ve had it” (…)”Even if we will notice the difference in our books” (…)”We do business there with big oil and gas companies which are run by local bigwigs. They simply tell our staff that the bill won’t be paid unless a certain person is “facilitated” first. To be clear, that means to be paid” (Dutch, 2015).

In Singapore there was a former engineer who worked at the Changai Airport Group (CAG), the engineer Henry Goh Keng Hwee was sentenced to 15 months in jail on 27. August 2015 to the following counts: “three for corruptly accepting bribes and six for deceiving the Group with fraudulent quotations. Another 19 charges under the Prevention of Corruption Act were taken into consideration in sentencing” (…)”The court heard on Thursday that Goh had accepted bribes totaling S$43,780 from Dennis Kang, a director of Fire-Mech, which was in the business of providing installation, servicing and maintenance works for fire protection systems” (…)”In seeking a sentence of 20 months’ jail and S$43,780 fine, Deputy Public Prosecutor Jiang Ke-Yue submitted that Goh, “motivated by sheer greed”, had abused his position of trust and influence, as his recommendations were relied upon by Management. “This is aggravated by the fact that he had built the bribes into the contract price, effectively earning secret profits from his own employer”, DPP Jiang said” (Chelvan, 2015).

In Taiwan Mr. Huang Ching-Tai the former Keelung City Council speaker is sentenced to 20 years in prison for charges involving bribes, graft, bribery, accepting kickbacks and more. A important part of the ruling was: “The court also found Huang guilty of embezzling public funds from the city council, amounting to NT$91.46 million (US$2.79 million), through falsified receipts and forged accounting item” (Pan, 2015).

In the U.S.A. a former Montana legislator Joel Boniek has been fined for violating the campaign laws. After that and denying it, but at the same time claiming the judges for being frauds saying and calling out Judge Motl: “Motl is a political zealot on a political witch hunt,” Boniek said when reached by telephone on Monday. “Being charged with corruption by the Democrats is like Genghis Khan protesting about somebody’s doing violence” (…)”This is all politics. They don’t like people like me who stand up for freedom and small government. It’s not about justice, it’s about getting Joel Boniek” (Talwani, 2015).

In Tallinn Estonia there is a case from ISS that certain high profile workers at the port of Tallinn might be corrupted: “The Internal Security Service (ISS) have apprehended state-owned Port of Tallinn CEO Ain Kaljurand and board member Allan Kiil” (…) ““The Internal Security Police did inform myself and the ministry early on. I learned about the process shortly after taking office [in April 2015],” economy minister Kristen Michal said. According to Michal, the ministry agreed to guarantee the operation of the company once the ISS moved in. “It is in our best interests that the Port of Tallinn is able to fill and service procurements it has won,” he said, adding that this includes the internal ferry route tender, which the company recently won. It will begin to service domestic ferry routes in a year’s time and is currently in the process of acquiring four new ferries” (Laats, 2015).

The last case I will put the light on is the plea and sad news of corruption from Zambia from the Bishop John Mambo: “It is sad that it (corruption) is happening in churches. How can I sink so low to solicit ungodly things in the house of the Lord? I left the world and went to join the Church so that I can be corrected when I am wrong and the hospital I can go to is the Church. That Church should have people of different kinds, including journalists. The pastor is supposed to be the doctor but when you find that the pastor is sick in the way he is conducting himself, then where do we run to?” (…)”When you go to church and you are being told to do wrong things…If that is happening in the house of the Lord, people will now start going elsewhere. It is also unfortunate that state machinery is being abused by the PF” (…)”If you don’t know the language of mafias, the way they operate, you are dealt with” (…)”I would rather die for what is right than me keeping quiet. Someone told me that I have been bought by The Post but I told him that The Post does not have the money to buy everyone who is speaking out on the wrong things that are going on in the country. The government shouldn’t tell us that we should fear them. no! We should fear God. Let them take my life but that will not be the end because God is the creator of my life. The poor are becoming very poor and the rich are getting filthy rich and have forgotten that they come from Mandevu and Chainda. They think they were born on Independence Avenue” (OpenZambia, 2015).

The stories tell it explicitly themselves. The only thing that I have pound about for so long is that it’s not a local thing, it’s a global action with effects on society when civil servants take kickbacks, when businessmen take a short cut the society and government loose in the end. The way the court and rule of law has to apply to the offences and the way local business and global trade get hurt by the actions of those who use Corruption as a tool to gain advance in society. Or use it to get rich by working and giving way to business is also stealing money from the state coffers instead of going to the supposed works of the state. That is why I keep pounding on it. As it is necessary to do so! And people like me will continue. To prove that it is everywhere and greed isn’t dying, it’s moving and there are people everywhere who will take the buck, governments and laws might abide, but it’s the ethics and mechanisms of the state should be able stop it. Sometimes seems that we have to continue to shine the light on the dark side to see if the when the dust clears what monsters will arrive from our society. Wish it wasn’t like this, but with the way we trade and conduct business together and a society where governments guides and gives regulations for the activity, the sad part is that certain areas the government can be bought or set by businesses instead of the actual regulation that supposed to be in place.