Here are the quotes and outtakes from the Ministry of Defence in Uganda. Government of Uganda has with this Ministerial Policy Statement (MPS) it shows the value of the Defence Ministry. So here we go to show it!

Vision of the Ministry:

“The vision and commitment of Ministry of Defence is to transform and sustain the UPDF into a modern, professional, efficient and accountable force” (MPS P: 7).

“The tensions which erupted in the Rwenzori Sub-region in July 2014 were contained by the Security forces. In order to fundamentally resolve the basis of the tensions” (…) “Disarmament Operations in Karamoja have largely been successful and as a result this year’s Tarehe Sita celebrations were held in the Karamoja sub region under the theme” (…) “Terror threats from Al-Shabaab and ADF still persist. Some murders particularly in Eastern Uganda have been linked to ADF elements” (MPS P: 8).

“To the north of the country, the security situation in South Sudan remains volatile. Fighting between the warring parties continued despite the IGAD mediation process in Addis Ababa, clashes in the states of Jonglei, Unity and Upper Nile persist” (…) “On the western frontier of our border with DRC, the threat of ADF persists despite ongoing operations by the DRC’S national army, the FARDC and the Intervention brigade of the UN” (…) “UPDF maintains strategic deployments along the border and an intelligence liaison team in Beni town to monitor this security situation. As reported last year, the M23 was militarily defeated and a political agreement reached between the DRC Government and the M23. However, the implementation of the agreed declarations in Nairobi has stagnated. For example of all the M23 ex-combatants that took refuge in Uganda only 182 have been repatriated and over 1000 are still in Uganda” (…) “the Counter LRA Operations. In the course of the year no agreement was reached in regard to Uganda joining the UN multidimensional Integrated Stabilization Mission for CAR (MINUSCA)” (…) “RTF).Counter LRA Operations in the course of the year were remarkable. Twenty five (25) rebels were killed and seven(7) forced to defect including Brig Dominic Ongwen, who is now being prosecuted by the ICC in the Hague. Over 100 abductees, including women and children were rescued from LRA captivity” (…) “In Somalia, the African Union Mission in Somalia (AMISOM) continues to register achievements. Key coastal towns, including the Port of Barawe which was the lifeline of Al-Shabaab, were captured. Consequently the 5 sea route portion between the ports of Mogadishu and Kismayo is now under the control of AMISOM forces” (MPS P: 9-11).

“The Uganda Air Cargo Corporation had its license withdrawn by the CAA in the general operation to enforce standards. For most of the year therefore the corporation has suffered heavy losses” (…) “the National Enterprises Corporation (NEC), performance has not been to the desired standards. Accordingly a new managing director is being appointed and the corporation will fundamentally get restructured” (MPS P: 12).

“Food stuffs and agricultural products were procured to feed troops on special operations, patients, trainees and ceremonial functions” (…) “It should however be noted that the budget allocation on food is 18.5bn against a requirement of 53bn hence creating a shortfall in the Ministry’s budget. There is need for an increment on the Ministry’s food budget” (…) “the Ministry to enjoy economies of scale and also ensure that the whole force is fully dressed at once. This costed the Ministry 22bn worth of uniforms against the allocated budget of 11b” (…) “Vehicles The Ministry continued servicing the outstanding debt obligation in respect to the acquisition of 109 vehicles. Payment for the same is expected to be completed in FY 15/16. Routine servicing which included procurement of spares and supplies of all vehicles and equipments to keep them operational was undertaken to enable smooth operation of the Ministry. With a meager budget of Shs. 1.573bn, single line tyre dressing of MoD/UPDF vehicles was also undertaken” (…) “Air force continued to consolidate its capability through routine maintenance, overhaul fabrication and procurement of service parts. Assorted workshop and ground tools were acquired to further strengthen the UPDAF capability to conduct routine maintenance. A total of 7.2bn” (…) “In order to facilitate training, the movement of troops and delivery of logistics at the required time and place, the ministry is projected to procure POL products worth Shs 31.976bn against an allocation of 10.3bn” (MPS P: 15).

“Decentralization of payment of government employee’s salaries to line ministries, the ministry continued to use the Integrated Personnel Payroll System (IPPS) to pay salaries of the public officers and pension/gratuity for the soldiers while the salary of the troops continued to be paid through the IRIMS. This has greatly improved payment of salaries as they were received before the 28th day of every month. During this FY 2014/15, the ministry plans to retire 1,112 personnel in phases” (…) “National Medical Stores (NMS), the ministry further strengthened the implementation of this directive by entering into a Memorandum of Understanding with National Medical Stores. Shs 3,019,523,250/= was remitted to NMS to cater for the ministry’s pharmaceuticals requirement” (MPS P: 16).

“Refurbish and maintain UPDAF Aircrafts: UPDF has a number of aircrafts that require regular refurbishment, maintenance, overhaul of engines as well as acquisition of spare parts. In order to enhance UPDAF capability, the MoD will focus on refurbishing and maintaining of the aircrafts” (…) “Machinery and equipment: The Ministry will continue to establish a combination of contracted and sustainable maintenance plan for its equipment in Mogadishu (…) “Defense Force Shop: Sale of duty free building materials to troops and their families and diversity stocks. The shop has 08 outlets (AMISOM)” (…) Defense Strategic Infrastructure Investment Plan (DSIIP): During this planning period, the DSIIP will continue to guide infrastructure development, resource allocation and prioritization of development. The DSIIP will focus on the construction of the referral ; construction of 30,000 housing units for soldiers” (MPS P: 19-21).

“The UPDF Spouses desk which falls under the Chieftaincy of Political Commiseriate aims at improving the welfare of families of the UPDF soldiers in all Units country-wide through empowering them with skills that will improve their livelihood.With a budget of Shs.40m” (MPS P: 23). 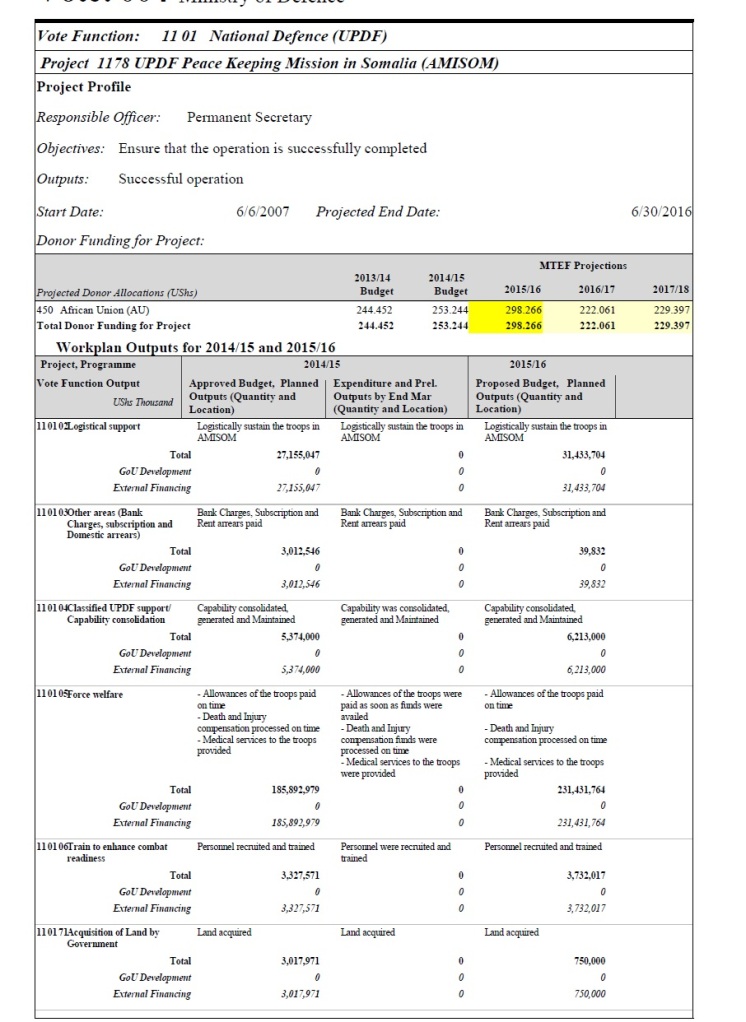 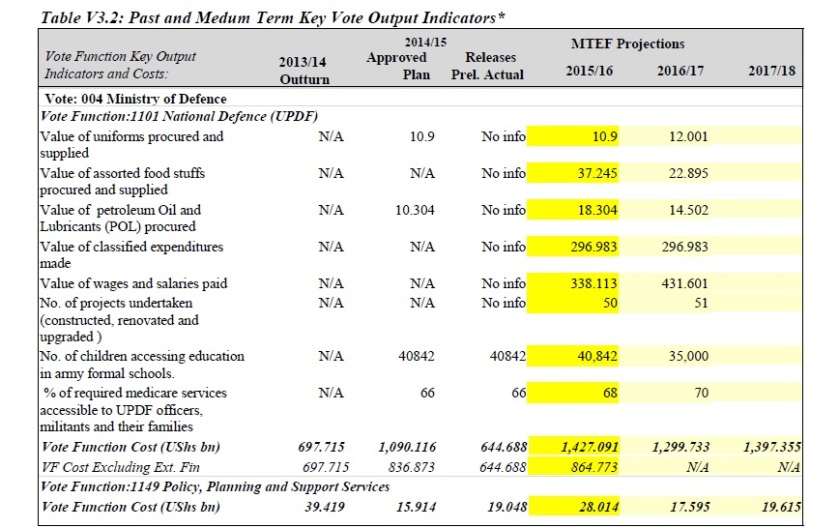 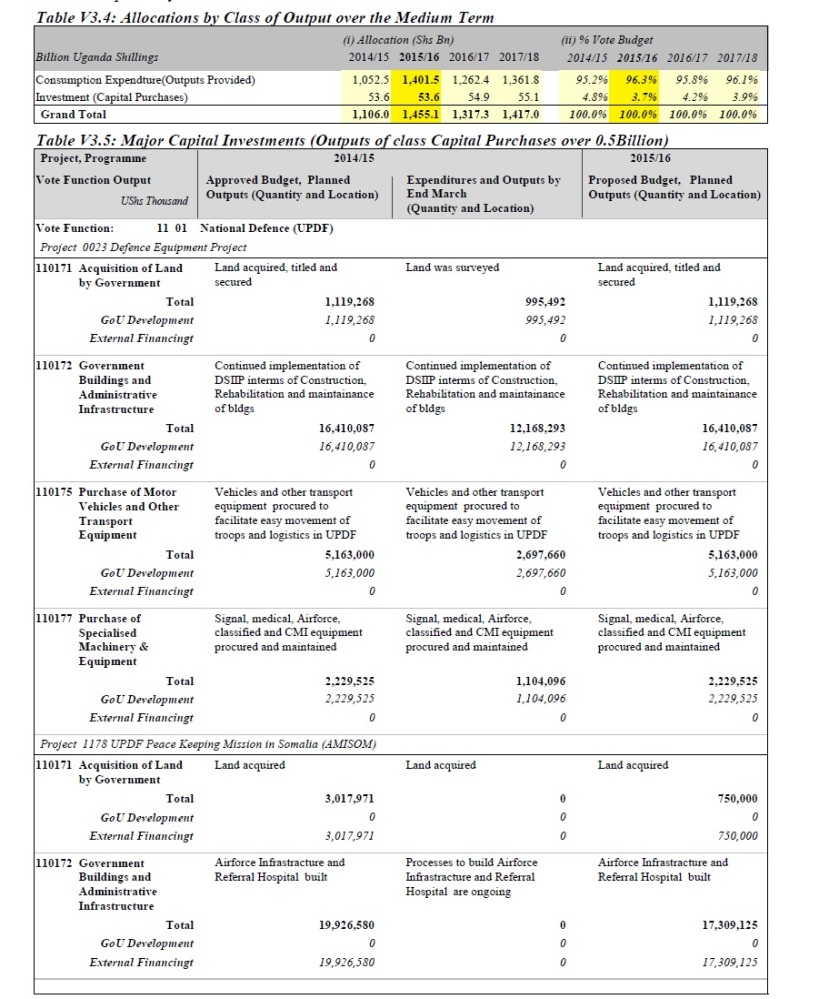 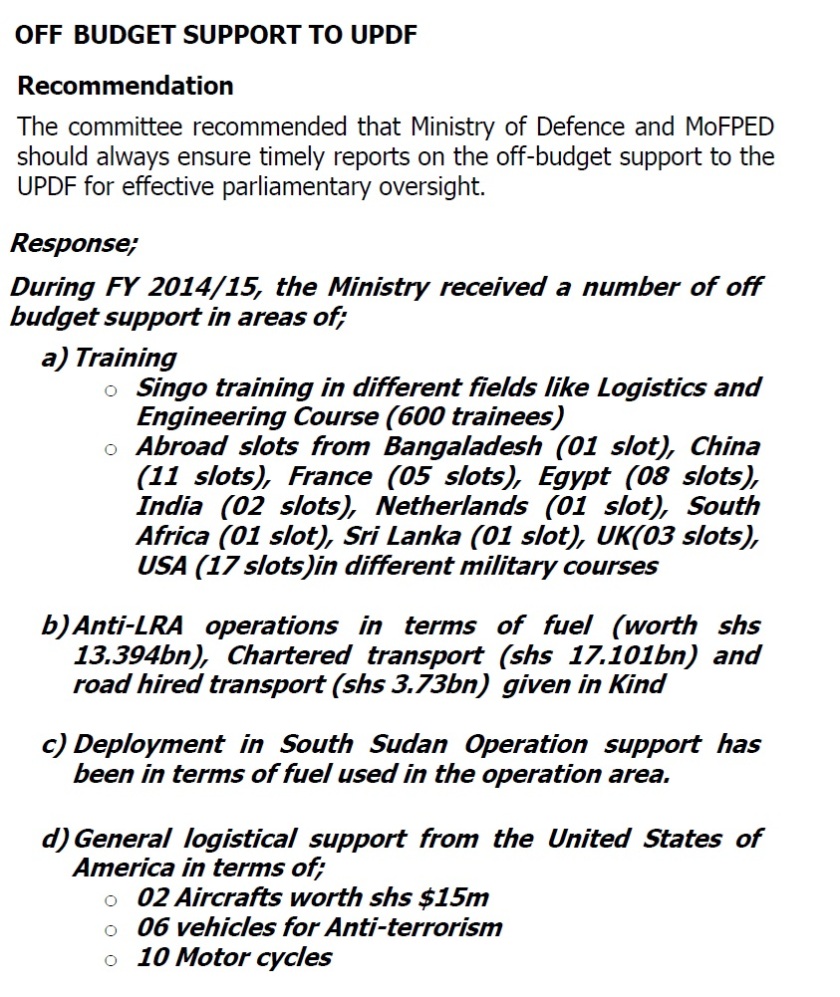 The opinions and wishes from the Statement are clear. You can see the wishes of the UPDF. The way the government wishes to use and function of the army. From being an important part of the African Union peace missions. To also becoming vital in the close area like in South Sudan where even the advice from the Parliament is to pull out. We all know that isn’t going to happen because of the relationship between Museveni and Kiir. They have fought together and helped each other. Now Museveni supports his neighbor and the SPLM. The UPDF are also already in Somalia and Central African Republic as well. When you see the budget for things you well ask yourself. As well as the Classified Equipment are big number and you starting to wonder what that money goes for. Especially when they call it ‘Classified’ and why it’s that size of cash. But I think the rest of the numbers talk for them self. Peace.