Kasangati Magistrate Court yesterday Ajured the case, today they put a Pro Bono day. That means that the officials say they work for free this, in the UK a Pro Bono is a volunteer act for the public good. From Wikipedia: “A judge may occasionally determine that the loser should compensate a winning pro bono counsel”. That is a compensation of a losing case so that they get counsel, but the court of Kasangati called it Pro Bono Day, meaning that they don’t need to work the case, but giving the lawyers of FDC and Dr. Kizza Besigye compensation as Pro Bono, for the common good. Though it is literally one thing, stalling of time…

“pro bono: adj. short for pro bono publico, Latin “for the public good,” legal work performed by lawyers without pay to help people with legal problems and limited or no funds, or provide legal assistance to organizations involved in social causes such as the environmental, consumers, minorities, youth, battered women and education organizations and charities”.

So if the Kasangati court would do the public some good, they woudn’t do what they did today, with stalling the case another day. Here is from the official!

“With the Court Of Appeal Justice, Remmy Kasule and Madam Ruth Ssebatindira at the Uganda Law Society probono day at the Railway Grounds this morning. It’s a day where members of the legal profession offer free legal counsel to the indegents and renew our commitment to uphold the values of eqity and social justice”.

So Yesterday the Kasangati Court said the government needed more time, today they have only volunteers and can’t address the case, a Pro Bono litteraly means, but the government has enough resources to keep the Police and Military Police around his house, his area and roadblocks from Kampala as we speak, and get everybody interviewed, filmed and recorded before entering the gates of Kasangati, as the House Arrest continues. That is acceptable in the state of Uganda, as President Museveni continues to linger in power and keeping innocent men in jail and house-arrest without charges or reason for the arrest. A continuation that has been steady since before Election Day on the 18th of February 2016 and seem to go on until the swearing-in at this point.

That being said as a reminder of the lawfulness of the Kasangati Court as they work with orders from above, not from following the law for preventative arrests or anything else, that specifies time for it and release of the prisoner, as they have never taken away that Colonial law as the Government of Uganda has the need for it, it seems. Peace.

Because of the recent events and movements in Burkina Faso. Its good to use the words of a former President of the country let us all think and have clear mind of what is happening on the ground. We can get some insights and think. Which is a good thing.. Well here they are! 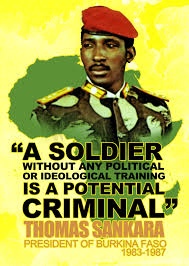 They should be seen as relevant to the matter and actions happening right now. If somebody else will say them or follow the spirit of Thomas Sankara. Peace.