“Famine is a stain on our collective conscience. Millions of lives are at risk and more will die if we do not act quickly and decisively.

We at the World Bank Group stand in solidarity with the people now threatened by famine. We are mobilizing an immediate response for Ethiopia, Kenya, Nigeria, Somalia, South Sudan, and Yemen. Our first priority is to work with partners to make sure that families have access to food and water. We are working toward a financial package of more than $1.6 billion to build social protection systems, strengthen community resilience, and maintain service delivery to the most vulnerable. This includes existing operations of over $870 million that will help communities threatened by famine. I am also working with our Board of Directors to secure the approval of new operations amounting to $770 million, funded substantially through IDA’s Crisis Response Window.

The World Bank Group will help respond to the immediate needs of the current famine, but we must recognize that famine will have lasting impacts on people’s health, ability to learn, and earn a living. So we will also continue to work with communities to reclaim their livelihoods and build resilience to future shocks.

We are coordinating closely with the UN and other partners in all areas of our response. We know that resolution to this acute crisis will not be possible without all humanitarian and development actors working together. We call on the international community to respond robustly and quickly to the UN global appeal for resources for the famine.

To prevent crises in the future, we must invest in addressing the root causes and drivers of fragility today and help countries build institutional and societal resilience.”

A famine means that a significant part of the population has no access to basic food, suffers from severe malnutrition, and death from hunger reaches unprecedented levels. Children under five are disproportionately affected. A famine can affect the well-being of a whole generation. Famine was officially declared on February 20 in South Sudan, impacting approximately 100,000 people, and there is a credible risk of other famines in Yemen, Northeast Nigeria, and other countries. Ongoing conflicts and civil insecurity are further intensifying the food insecurity of millions of people across the region, and there is already widespread displacement and other cross-border spillovers. For instance, food insecurity in Somalia and famine in South Sudan are accelerating the flow of refugees into Ethiopia and Uganda. The UN estimates that about 20 million people in Nigeria, South Sudan, Somalia and Yemen are on the “tipping point” of famine. Drought conditions also extend to Uganda and parts of Tanzania. The last famine was declared in 2011 in Somalia during which 260,000 people died.

Again, the mighty West is involved in internal squabbles in Zimbabwe. I am surely that the tourist from the West who goes to Zimbabwe comes with teaching of violence and comes with knowledge of the infamous book ‘From Dictatorship to Democracy’ of Gene Sharp. Because the tourists are not coming to look at the beautiful nature apparently they come to counter the draconian government of President Mugabe and his ruling party Zimbabwe African National Union – Patriotic Front (Zanu-PF).

“Dr Ignatius Chombo who is Zanu-PF Secretary for Administration told state media that President Mugabe laid the essential framework to guide Zanu-PF and the whole nation during the ruling party’s Politburo and Central Committee meetings in the Capital city Harare last week. Zanu-PF Secretary for Administration said, “As the party’s Secretary for Administration, I want to remind party members and the rest of Zimbabweans of the 10 exhortations which were made by the President during the Politburo and Central Committee (meetings) last week” (…) “These exhortations are what will guide the party accordingly as we prepare to go for the December Conference as well as position ourselves against the threats posed by the West” (…) “Firstly, there is need to Organise the party from cell, village, branch, district and provinces. We should also truly bring the people together under the banner of Zanu-PF. We should also undertake to shun factionalism, divisions, nepotism, tribalism and regionalism” (Zimbabwe News Day, 2016).

Because the West is the reason for the public demonstrations, not that the government themselves have made policies that gives the Police Force more new Anti-Riot Gear, but doesn’t pay salaries. It is the Western sanctions wrong that the Zimbabwe Government have paid the elites and their businesses, instead of paying salaries to the Army and Health Care Workers. It is the West fault that the infrastructure projects have been embezzled from. I am sure that it is the West fault that the drought came and that the rain isn’t falling steady.

But as President Mugabe is supposed to be a biblical leader he should pray and this all should be solved like snap of his fingers and with the might of his powers. With the biblical powers of President Mugabe the Western Powers shouldn’t have the ability to influence and change the outcome of the political dissidents in Zimbabwe. Still, they are the problem; not themselves?

President Mugabe and Dr. Ignatius Chombo are using the West as a scapegoat from their own misgivings and maladministration. As the Cash-Strapped and deficit is man made by the Zanu-PF who are there for the interest of themselves and not the citizens. The Citizens are tired of taken for granted and used as pawns for the World Bank and International Monetary Fund to get bail-out and debt-relief as the Central Government are borrowing ever more money without getting revenue in the same levels of the expenses. Well, I guess that is the West fault as well.

So #ThisFlag #Tajamuka #NERAdemo and #NoBondNotes are the West fault. It is not internal problems as the Zimbabwe Police Force brutality and the aggressive government to silence the activists in ways of arresting and detaining them, even get them to hospital by the force used on the streets. This is the entire West fault, as they support the Police with Tear-gas and batons to hit the citizens like they are baseballs. Not the mismanaged social policies and deficiencies over time together with the tiredness of a regime who doesn’t value their citizens. It is the West who has created these demonstrations.

If the current leadership of Zanu-PF together with the President Mugabe believes the West is behind it. Than they are blind behind their wealth as fog of ignorance of the reactions that can come by continuing policies and economic stagnation without any clear indication of catering to the unemployed, educated and average citizen as they struggle with their day-to-day. While the Zanu-PF are riding luxurious cars and living in mansions or hotels while the citizens cannot take out needed funds to pay for rent. That is not the West fault, that is the economic fragmented and economic policies made by the Zanu-PF; and when the citizens of Zimbabwe cannot pay their bills even as they have money in bank shows the legitimate reason for demonstrating against their regime. This is not a problem created by the West, this a problem created by the Harare and Mugabe Administration.

It is time for the Zanu-PF to man-up and take responsibility for their actions. Instead of blaming the West; I am just waiting for the President Mugabe saying that Evan Mawarire being hired by CIA and MI6 to Coup his regime. I shouldn’t write it, the Zanu-PF minions might use this as proof. Because, the West is always the behind everything that creates problems for the Zanu-PF; not that Zanu-PF creates their own problems. Peace. 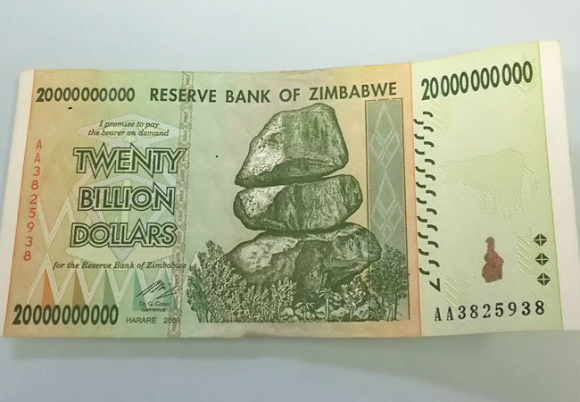 The World Bank Group is committed to work with all partner countries, including Zimbabwe, to achieve their long term development goals. We care deeply about the well-being of the people of Zimbabwe.

Contrary to what has been reported in some media, Zimbabwe is not currently eligible for financing under IDA’s turnaround facility. The Zimbabwe Turnaround Eligibility Assessment Note that was leaked to some outlets is an unofficial draft document that has not been approved by the Bank.

The World Bank will only resume direct lending to Zimbabwe when the issue of arrears is resolved. This approach is standard to all International Financial Institutions.  Upon arrears clearance, Zimbabwe would be eligible as a borrowing member of the Bank to a broad range of financing instruments.