“Two members of parliament from Laikipia County engaged in a physical confrontation as they emerged from a peace meeting convened by interior affairs cabinet secretary joseph Nkaissery at harambee house. Laikipia north MP Mathew Lempurkel clashed with nominated MP Sarah Paulata Korere during which they are reported to have exchanged blows and kicks. Both MPs recorded statements with the police accusing each other of assault” (Kenya Citizen TV, 2016)

“Bahati MP Onesmus Kimani Ngunjiri has urged Kenyans to monitor the six Jubilee and Cord legislators popularly known as Pangani who were charged with hate speech to make sure they do no spread hate speech ahead of the 2017 elections” (Daily Nation, 2016).

“A section of prominent Kenyan politicians are using hate speech as a campaign tactic. This is according to Ushahidi, a crisis mapping tech company in Kenya. Daudi Were is the CEO of the company, and he affirms that there is indeed a worrying trend of tribal spurring and incitement especially on social media” (Africa News, 2016)

“Interior Cabinet Secretary Joseph Nkaissery says the recent detention of Members of Parliament accused of promoting hate speech signifies just the beginning of the war against incitement. Nkaissery says that should serve as a warning to other leaders inclined to take a similar route” (KTN News Kenya, 2016)

“The eight legislators from both CORD and Jubilee who were being held by police over hate speech allegations have been charged with incitement to violence. The politicians arrived at the Milimani Law Courts at 5am Friday morning under heavy GSU escort and were locked up in the cells before opening of the court. They include Machakos Senator Johnson Muthama, Busia woman representative Florence Mutua, Kilifi woman representative Aisha Jumwa, Moses Kuria (Gatundu South MP), Ferdinand Waititu (Kabete MP), Kimani Ngunjiri (Bahati MP), Timothy Bosire (Kitutu Masaba MP) and Junet Mohamed (Suna East MP). Police report indicates that they had to ferry the MPs to court very early before sunrise to avoid confrontations from their supporters and sympathizers. The leaders have been in police cells since Tuesday and were not allowed to meet their political leaders and friends. The High Court on Thursday upheld the lower court’s decision to detain them after considering public interest as opposed to individual interests. Further detention of the legislators was also meant to allow police finalise hate speech allegations facing them” (KTN News Kenya, 2016)

I will here discuss the matters of double standard between the Deputy President William Ruto and the recent detained MPs or Legislators in Kenya, as there are certain misgivings as they are not justified, because in the same time-span that the MPs might spoke with ‘hate’. The Same ‘hate’ and words of agression came from the mouth of Ruto. As I will explain and show, as the system is made for the Jubilee, against the CORD. Take a look!

Yesterday the Kenyan Police and the National Cohesion and Integration Commission (NCIC) we’re busy getting Members of Parliament and legislators behind bars for brawling with their tongue of late, the men that got in the spotlight of IGP Joseph K. Boinnett, CS Interior Joseph Nkaissery and Hon. Francis Xavier Ole Kaparo who have taken a decision to detain these for their words of supposed hate. These men are Moses Kuria, Ferdinand Waititu, Aisha Jumwa, Florence Mutua, Johnstone Muthama, Junet Mohammed, Timothy Bosire and Kimaani Ngunjiri. 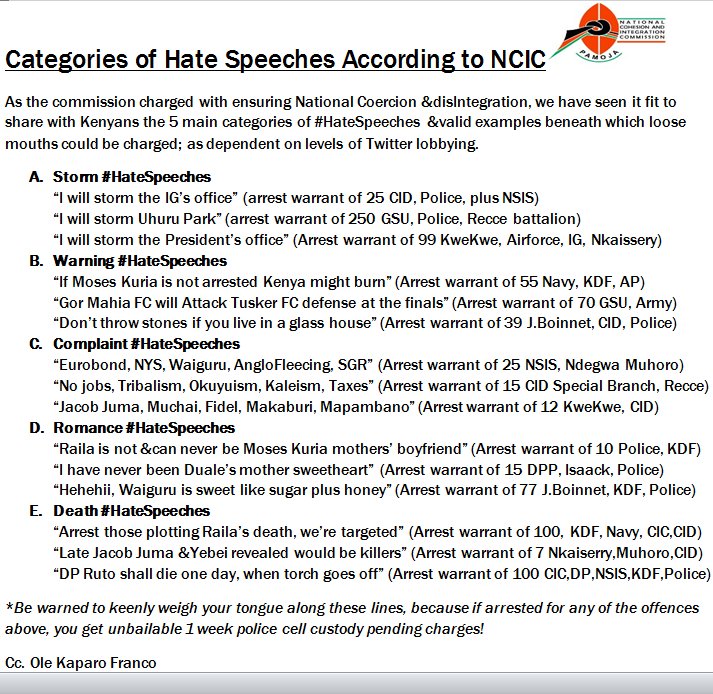 Because on the 11th of June Deputy President. William Samoei Ruto said this: “Just like Al-Shabaab mayhem, the Cord protests affected the economy. There’s no difference between the terrorists and people who disturb us every Monday.” (Barasa, 2016).

So I am sure that the 8 men said something offensive, just like Donald Trump says something offensive like wanting to be congratulated for being right that somebody had to be killed by a terrorist, as long as there are actual Muslims still in the United States, in the same way the CORD and Jubilee MPs have said something hateful or disregarding fellow politician and central leadership of Kenya.

Though who isn’t spreading fear and agony when fellow citizens who walks on the streets against the Independent Electoral Boundaries Commission (IEBC) and their impartial treatment of the public and their chicken-scandal; doesn’t make the matter better for the credit and trust in the Government institution and responsibility towards the ballots to the IEBC.

But I am sure that Jubilee, means well, deep in their hearts, though it seems like they are consolidating their power, more and more by the day, while also tendering to the foreign donors and access their neighbor countries. Something they have done with Somalia, Ethiopia, Uganda and their leaders. 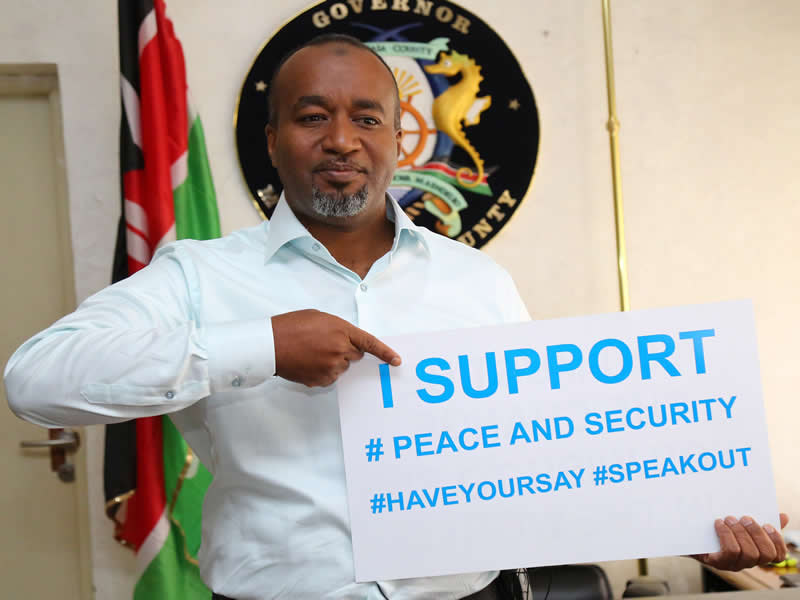 So let me clear the air, while the CORD and Jubilee legislators are detained over night for their words; why wasn’t any concern put on the second man of the nation of Kenya? Why was the locally elected in their constituency as men of their decision to jail these men for their words and tone, when the second man in charge of the country even claimed that a load of their citizens are like ‘terrorist’; Al-Shabaab’s as they are responsible for the shops closing, but none of the leadership and government question the Police Officers for their violence and aggravated actions against the citizens who are demonstrating? That what is worrying me, the impunity of actions from government, while the Opposition are getting harassed by either the Police or other parts of government institutions like NCIC of this week.

As I said, I am not standing for the words of CORD; it is more the blistering actions from Deputy President William Ruto, who have been as aggressive as the CORD MPs and Senators, so when they are detained days upon days, and would even are being detained until Friday. When we see this and has this in mind, the Jubilee and the leadership as they are responsible for all citizens as a government, not only the ones that have voted for them and their MPs.

I cannot address it enough, the CORD is not all right, neither is the Jubilee, the important factor is to get fair judgement of character and fair treatment, as the Jubilee, have not done that as they are sitting on the throne and expect silence from the Opposition and their questions towards Government institutions. Instead they are being beaten and tear-gassed as they want to make amendments to the regulations and Electoral Commission that exists. As they have faith and history of the IEBC to want it to be reformed, and while the Jubilee and ruling regime harass and oppress, doesn’t validate their actions towards the General Election. Because both coalition and parties have to fix it together and should instead of “fighting” each other, actually have dialogue and not cross each other.

Not that what all CORD MPs are justified, but the DP Ruto is not stating a peaceful manner as well, when he calls out a grand amount of people and calling them alike to ’Al-Shabaab’.. That is worrying as the NCIC and CS Nkaissery would never do what they did to several of the MPs or legislators recently, as they cannot revoke or fire the cabinet members and council-members of the NCIC. That is why they would never express grievences against Ruto and his words to CORD. Peace.