A person can have a moment of clarity, those profound moments of a deep understanding or epiphany where the truth is played out. Not only in your own mind, but in words to the people around you. I think that Foreign Minister Henry Okello Oryem had such a divine moment yesterday. Where he spoke the truth. A truth that the regime, the government he represents and the friendly allies doesn’t want to associate with. Even if it is true, because that undermines their efforts and their message ahead of the 2021 elections.

Just read this excerpt from the Daily Monitor:

“In an interview with Daily Monitor yesterday, Mr Oryem attributed the “change of mind” to the wellbeing of Ugandans living in China. The minister said no Ugandan who had travelled abroad to look for better life wishes to return to poverty [in Uganda] from which they ran away. “Even if they (Ugandans abroad) come back, they will come into poverty. And if they come back, no one will welcome them back into their homes and they will also have nothing to do,” Mr Oryem said” (Tonny Abet – ‘Ugandans in China refuse to come back home’ 25.06.2020, Daily Monitor).

The National Resistance Movement, the State House and all the arms of government cannot be happy. That the Foreign Minister says this and get this in print. No matter if this is the truth or not. This is bad image and bad storytelling. These sort of things are maybe said in the corridors of power and between friends. However, public officials wouldn’t say these words without consequence.

Especially, when this government is promising middle income country status. Growing and expanding industries, wealth creation and extensive exports of produce. These words from the minister will hurt the pride of the government. Yes this is a known fact of the poverty and lack of development. Which haven’t changed substantially since the government took power in 1986. They might want to claim that, but in the end. The same problems that was there in the 1980s are still their in 2020.

The Minister was honest about the issues. He spoke the truth. A truth the government usually don’t want to reveal. Even if the government is high as a kite on loans. They are deficit financing and recycling debts to cover old debts. The state is loaning for everything, anticipating grants, because the state doesn’t have enough revenue for its operations. That is why the poverty is true.

However, the Minister isn’t supposed to say this. Especially, when the state wants to look like a success story every day ahead of the polls in 2021. Peace.

Opinion: Oryem should look into how the state coffers is spent…

“Recently government introduced a small amount of money as OTT but everybody went in arms about a small penny. Everybody is complaining and the moment you introduce a small tax, the entire country is in arms and runs to demonstrate. Where do you want government to get money from, Ugandans should get away from the culture of blaming everything on government. If you want better services, someone has to pay for them through taxes. The better schools, hospitals and roads all come because of the taxes you pay” – State Minister for Foreign Affairs, Hon. Henry Okello Oryem

Hon. Oryem, the State Minister have defended the government for issuing new taxes and expenses on its citizens. As this is happening, all bigger infrastructure projects are taken with foreign donations or loans. The state is loaning more and more funds, the devolution and the expensive growth of Local Government combined with ever growing State Security or Defence Operations makes the state bloated. Plus you have the open bazaar, grand corruption and lack of service delivery. Therefore, the Minister should be a bit more careful to defend the actions of the state.

Oryem, the National Resistance Movement are more careful to pay off needed people for their loyalty, than actually deliver state functions. That is why the Parliament are steadily occupied with getting new loans for infrastructure or even basic services. There Health Care is depleted and that is why the MPs and VIPs cannot get treatment in the Republic, but have to transfer to India, Kenya or South Africa. That is what the big-men does, because know the Hospitals aren’t all good.

That is why Oryem should be a bit more silent and not expect people to be happy for paying taxes. As the people have to cover, to fix and pay school-fees, pay higher for Mobile Money and spend more on basic commodities. Not like they are getting better services, just more expensive. The state is already mismanaging such vast amounts of money and paying ghosts too. There are teachers who hasn’t been paid for months and using energy on side-projects to make a living. Therefore, the State Minister should look into that. As the budgets are as big as light-bulbs for schools, which was built during the time of Idi Amin. Not like the NRM have used fortunes on keeping the Universal Primary Education a float.

Oryem should look into this and maybe even check more closely how the little taxes is spent in the Republic. Because, the misuse, the corruption and the growing debt is a signal of mismanagement, which again is a reason why people don’t like pay taxes. That is all within reason. The only thing that really working is the monitoring and the facilitation of tear-gas, live-bullets and arresting of opposition politicians. Peace.

South Sudan: Entebbe Declaration on the Operationalization of the Arusha Agreement on the Reunification of the SPLM (27.07.2017) 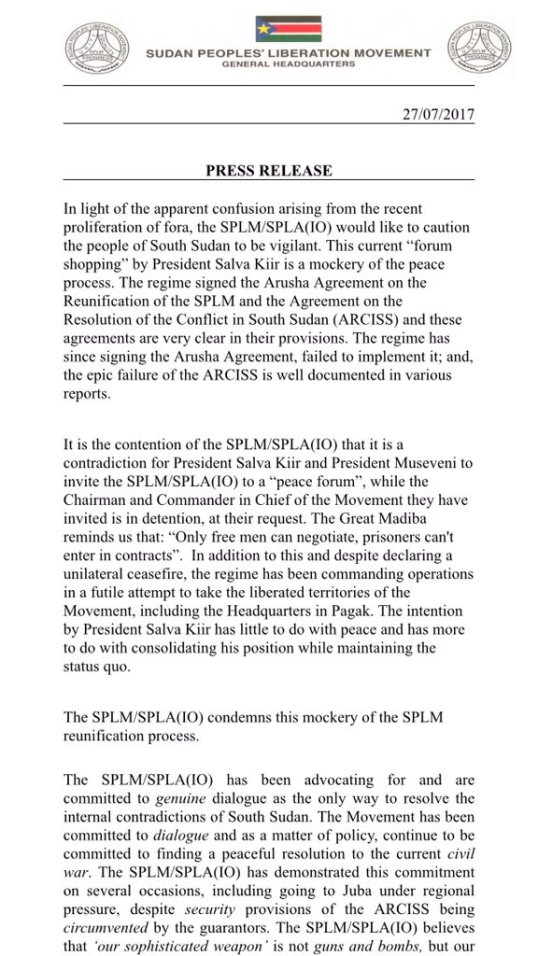 Reports from the UN International Organization on Migration (IOM) “suggest that Government forces are now approaching the town of Maiwut, 25 kilometres north-west of Pagak”.

Reports from the UN International Organization on Migration (IOM) “suggest that Government forces are now approaching the town of Maiwut, 25 kilometres north-west of Pagak. I’m gravely concerned by this ongoing situation,” the Special Representative of the Secretary-General in South Sudan, David Shearer, told reporters from Juba, the capital.

He added that while it is unclear which side began the fighting, the military advance by the South Sudan forces “is not in the spirit of the unilateral ceasefire” declared by the Government in May.

Mr. Shearer said there has been “active military engagement” over the past week north of Pagak, and at least 25 aid workers have relocated in the area as a result of the insecurity.

The senior UN official, who is also the head of the UN Mission in the country, or UNMISS, also voiced great concern about an orphanage near Torit, south of Juba, surrounded by Government and rebel fighters who are preparing to fight.

“It’s unacceptable that 250 innocent children, and the people who care for them, find themselves in no-man’s land between the warring parties,” Mr. Shearer stressed.

Requests by UNMISS to access the Hope for South Sudan Orphanage have been denied “locally, on the ground.”

The Government forces central command in Juba yesterday gave UNMISS “the go-ahead to send peacekeepers to the orphanage. I’m hopeful that will happen today,” he added.

Mr. Shearer urged both sides to reflect on President Salva Kiir’s Independence Day message of peace and withdraw from the facility.

In addition to accessing the orphanage, a group of Nepalese peacekeepers have been sent to protect civilians and the UN base in Torit.

“The number of patrols we can undertake in the town will increase with the additional peacekeepers. In turn, that should provide more security and boost confidence,” said Mr. Shearer.

He noted that his deputy, Moustapha Soumaré, is travelling to Torit tomorrow and will report back.

The Political Opposition Forces – “All-inclusive negotiations toward a new agreement are essential to sustainable peace in South Sudan” (11.07.2017) 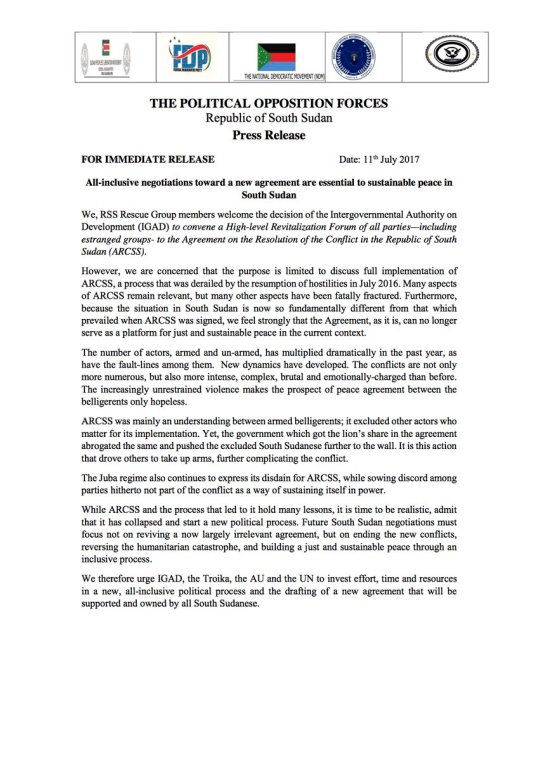 To date, Abyei has no police service system in place and there is no functioning joint local administrative structure.

UNISFA expresses its deepest condolences and sympathy to the family of the victims and vows to investigate swiftly the attacks with the Joint Peace Committee, the traditional leaders, as well as Sudan and South Sudan governments, and bring the perpetrators to justice.

UNISFA emphasizes its commitment to implement its mandate to secure Abyei Area and to protect civilians under imminent threat of physical violence, without prejudice to the responsibilities of the relevant authorities.

To date, Abyei has no police service system in place and there is no functioning joint local administrative structure. The absence of these systems has resulted in the increase of criminal cases.

The current influx of population in Abyei has contributed towards increased economic and social activities in the area. The unemployment among the youth is a cause of concern which also leads to manifestation of crime in various forms.

In light of the recent incidents, UNISFA has stepped up its security measures particularly in and around Amiet common market which is a vital economic hub for different tribal groups including Ngok Dinka and Misseriya. Most of the criminal incidents in recent months have taken place in the vicinity of the common market.

The last two months have seen an upsurge in cases of cattle-rustling, carjacking attempts and robbery/shooting incidents. In May, a grenade exploded in Amiet market resulting in injuries to some civilians.

UNISFA reaffirms that criminality in all its forms is a serious threat to the security situation in Abyei Area.

UNISFA urges all communities and groups to support the Mission in its efforts to maintain the degree of peace and stability that Abyei has been experiencing over the last two years. The criminal activities should not deter the significant progress made towards improving relations between the Messiriya and the Ngok Dinka communities.

UNHCR welcomes the support of the European Union for South Sudanese new arrivals in Sudan (10.07.2017)

“We are seeing a great increase in the number of refugees coming across the border into Sudan, indicating that things are not getting better in South Sudan despite all our hopes for peace and security there. Support from the EU and others is heartily welcomed”, Yoshida said.

Impressed by the generosity of ordinary Sudanese people who share very limited resources with South Sudanese refugees in dire need, Yoshida said UNHCR and its partners are seeking to scale up their assistance to host communities receiving refugees.

“More funding is needed so that we can meet the existing and growing needs of refugees and host communities. Support from EU and other donors will ensure we have the resources to meet immediate needs and put in place adequate services to improve the quality of the current response”.

EU humanitarian funding covers three states (White Nile, East and South Darfur states) out of five states which have been considerably affected by the influx of South Sudanese refugees. The funding is earmarked to registration activities, reception support and shelter and provision of basic household items.

EU humanitarian aid has previously supported UNHCR in the response and provided EUR 4.4 million in 2016 towards UNHCR’s efforts to respond to critical life-saving needs.

UNHCR and its partners have appealed through a Refugee Response Plan for USD 221 million in 2017 to assist refugees and host communities in Sudan. As of June 2017 less than 20% of the funds have been received.