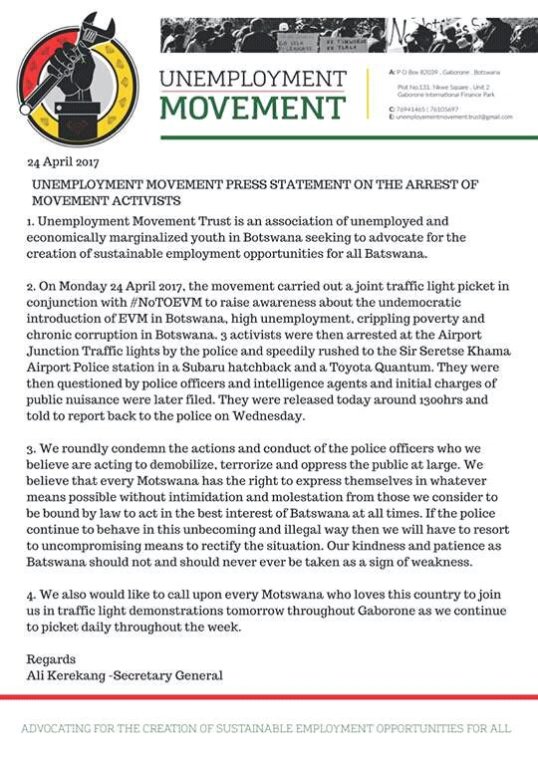 Press Release: “The Government of the Republic of Botswana is once again very alarmed by the reported crimes against humanity and humanitarian catastrophe that continue to take place unabated in the Syrian Arab Republic (12.09.2016)

The Government of the Republic of Botswana is once again very alarmed by the reported crimes against humanity and humanitarian catastrophe that continue to take place unabated in the Syrian Arab Republic. Many of these murderous acts are perpetrated by President Assad, his illegitimate regimes and allies. We are deeply moved by recent images of injured civilians, including women and children in this savage and senseless war. Botswana is also dismayed by increasing reports on the use of chemical agents against the civilian population in Allepo by the Assad Regime.

The Government of Botswana wishes to make an appeal, for the sake of humanity, that all parties to the conflict cease indiscriminate attacks on civilians, including civilian infrastructure and medical facilities. We further call on the Assad Regime to allow immediate and sustained humanitarian access to all people in need, throughout Syria, in accordance with UN resolutions. The international community has allowed the Syrian people to suffer.

The United Nations Security Council has failed dismally in its mandate to lead international efforts to find a lasting solution to the crisis, and to protect the vulnerable population in this conflict. We cannot just standby and do nothing, for history will judge us harshly. We therefore, urge all parties to the conflict, and other members of the international community, to promote and support a political settlement in Syria.

We further urge all States who are increasingly being drawn into this conflict to stop any material or financial support to groups designated as terrorist organisations.