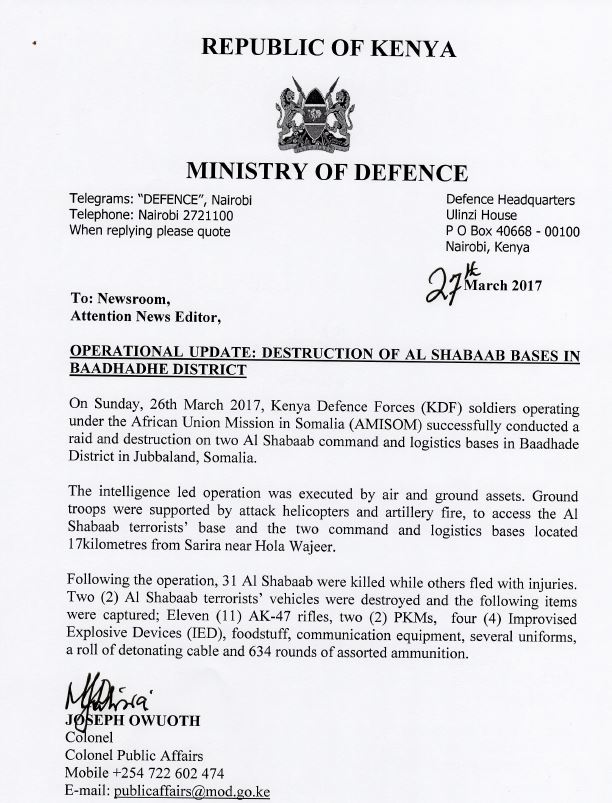 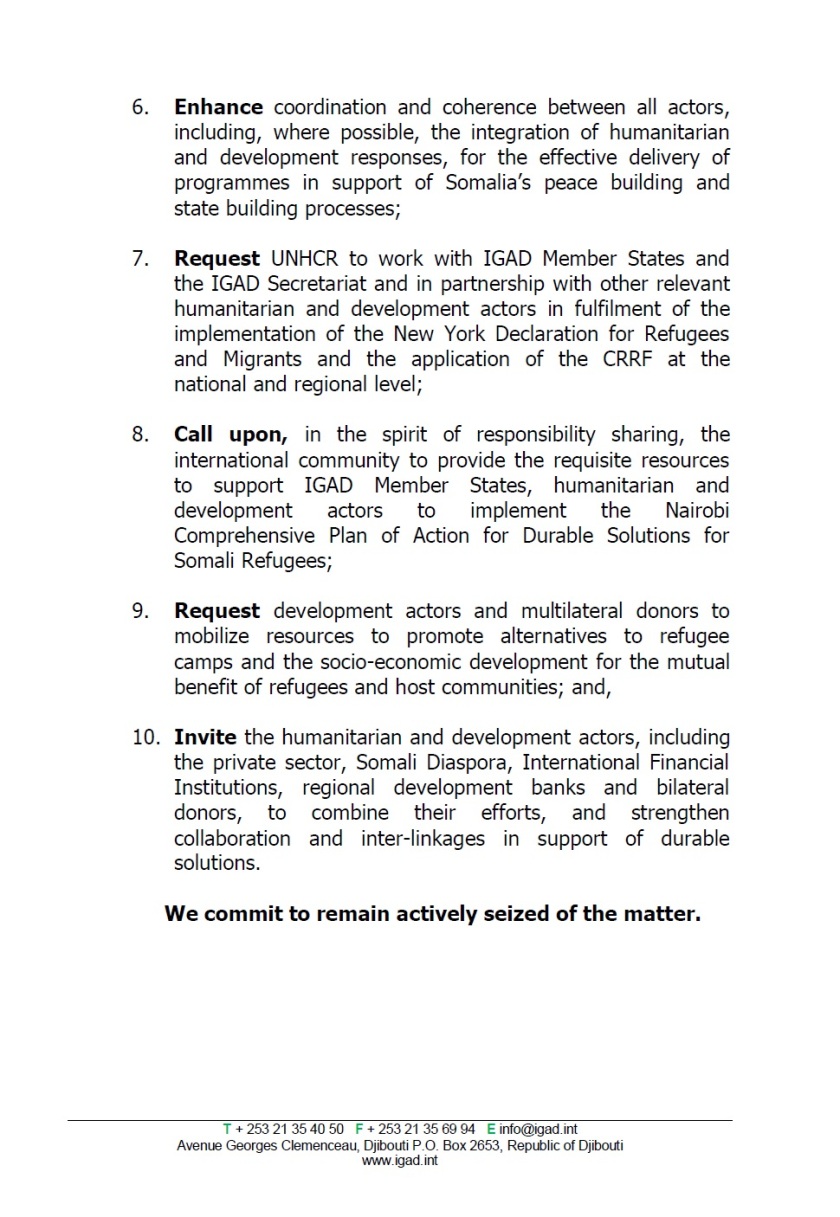 “The arms trade – an intricate web of networks between the formal and shadow worlds, between government, commerce and criminality – often makes us poorer, not richer, less not more safe, and governed not in our own interests but for the benefit of a small, self-serving elite, seemingly above the law, protected by the secrecy of national security and accountable to no one.”

As of today there two United States Representatives from the Republican Party Ted Budd of North Carolina and Duncan Duane Hunter from California that for their own reasons to stop sales of U.S. arms to Kenya, this they have forwarded a joint resolution. This was first from Ted Budd, but Duncan Hunter became his co-sponsor of the bill. Of today it has been transmitted to the Committee at the House Foreign Affairs that will work on it, before initial voting.

“That the issuance of a letter of offer with respect to any of the following proposed sales to the Government of Kenya (described in the certification Transmittal No. 16–79, sent to the Speaker of the House of Representatives and the chairman of the Committee on Foreign Relations of the Senate pursuant to section 36(b)(1) of the Arms Export Control Act (22 U.S.C. 2776(b)(1))) on January 19, 2017, is hereby prohibited:

It is not long ago since this was sanctioned to the Kenya Defense Force and their missions, as this was a supplement to the on-going missions that the Kenya contingent in Somalia and might even be used as blue-helmets inside South Sudan. Still, the U.S. Representatives think these will be misguided and not well used arms for their ally in East Africa. This is the double-standard and double moral from the U.S. counterparts that easily has dropped and sold this sort of weapons to others, but has to all of sudden sanction Kenya for buying the same thing.

Just take a look at the timing of the deal between the U.S. and Kenyan earlier in 2017:

“The US Defence Security Cooperation Agency (DSCA) notified Congress of the possible sale on 19 January and disclosed the potential sale on 23 January” (…) “The DSCA said Kenya had requested the sale of up to twelve Air Tractor AT-802L and two AT-504 trainer aircraft, weapons, technical support and programme management worth $418 million” (…) “This proposed sale contributes to the foreign policy and national security of the United States by improving the security of a strong regional partner who is a regional security leader undertaking critical operations against al-Shabaab and troop contributor to the African Union Mission in Somalia (AMISOM),” the DSCA said” (…) “The proposed sale provides a needed capability in the ongoing efforts to counter al-Shabaab. The platform maximizes the Kenyan Defense Force’s Close Air Support (CAS) ability because it is a short-field aircraft capable of using precision munitions and cost effective logistics and maintenance.” (DefenceWeb, 2017).

So a purchase accepted in January is now in question in February, as the new Trump Administration will not care for the allies and friends as such before. The DSCA sanctioned the sale on the 23rd January 2017 and now on the 14th February 2017 the U.S. Representatives questions the sale. So the AMISOM mission and their allies who fights in it doesn’t matter as much, as that was the destination for the arms and technical weaponry in this transaction. That the sales of close worth over $400m that suddenly goes into the wind!

We will see if the Foreign Affairs Committee at the House of Representatives will work with this and see if this will go for voting in the House or Senate to sufficiently go forward with joint communique of Ted Budd and Duncan Hunter. That then will become legislation as the deal will not happen as the Committee will put forward a motion or legislation that the stops the arms agreement and trade between the DSCA and the Government of Kenya. Therefore the U.S. Arms trade to the Kenyan Defense Force.

This story is certainly not over. Peace. 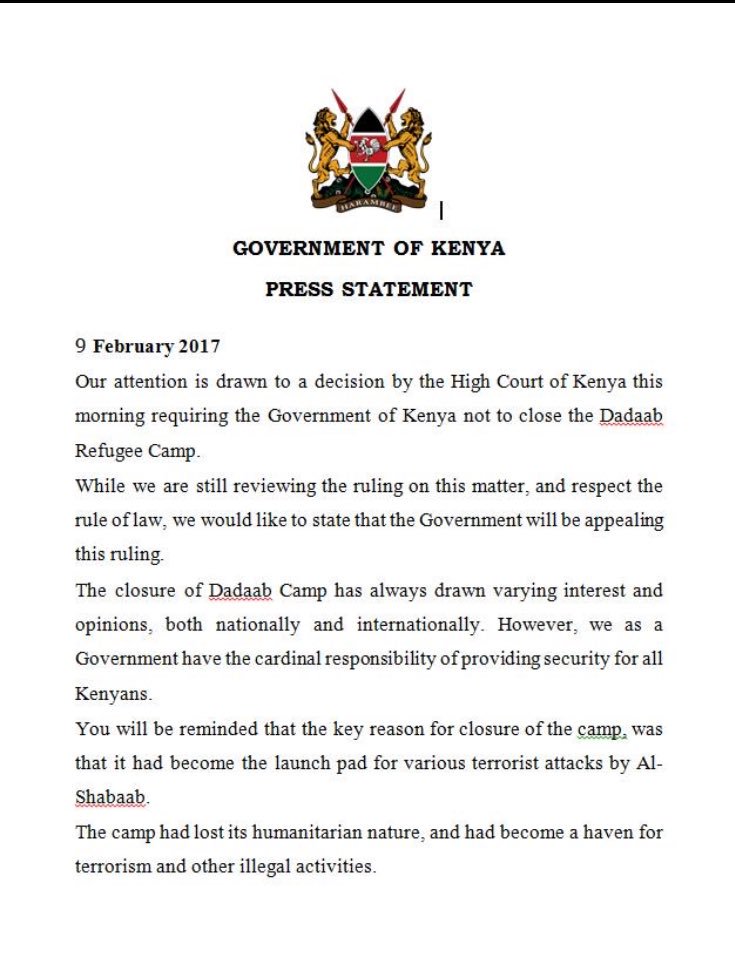 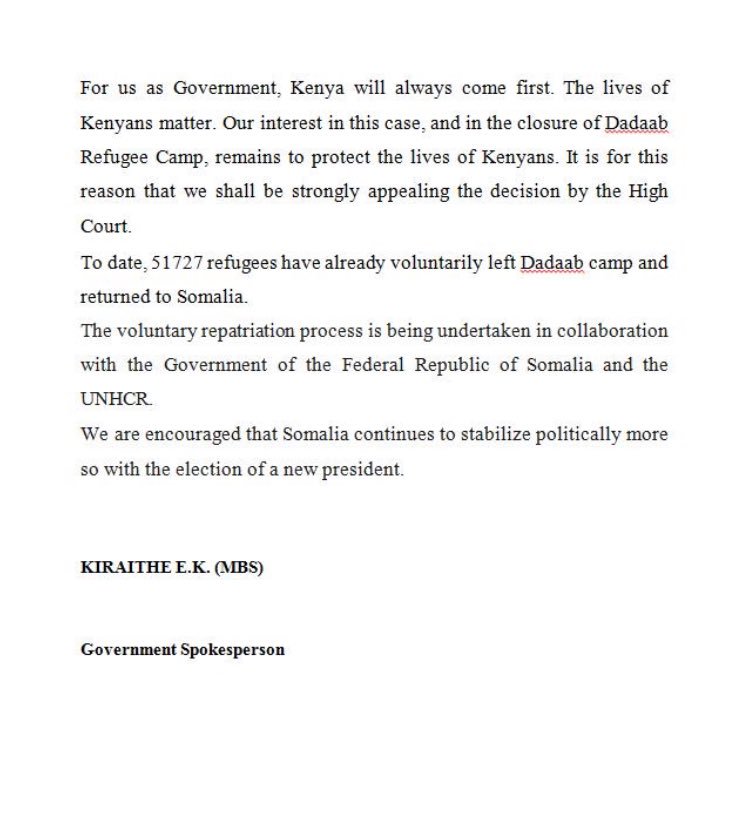 The Somali refugee crisis is one of the longest-running in the world, with people who have been displaced for more than 20 years.

NEW YORK, United States of America, January 11, 2017 – More than one million Somali refugees who have been displaced from their homes for decades are becoming despondent as they continue to be unable to return home and donor support is growing fatigued, according to the United Nations refugee agency.

“There is a growing sense of helplessness in the camps because people are feeling forgotten,” said Mohamed Abdi Affey, the Special Envoy to the Somali refugee situation for the UN Office of the High Commissioner for Refugees (UNHCR).

The Somali refugee crisis is one of the longest-running in the world, with people who have been displaced for more than 20 years. Some one million live in camps throughout the Horn of Africa, while an additional 1.1 million are displaced within Somalia.

“There has been some real progress in Somalia over the past few months, including the successful organization of elections inside the country,” acknowledged the Special Envoy. “What’s needed now is to build up infrastructures across the country so refugees do not suffer when they go back.”

UNHCR is backing a regional summit, led by the Intergovernmental Authority on Development (IGAD) in Eastern Africa, which will take place in March to determine lasting solutions for Somali refugees. A proposed regional response would provide continued protection to 262,000 Somali refugees in a camp in Kenya that has been hosting people for more than 20 years. When a decision was made last year to close the camp, UNHCR lobbied the government with a new plan of action and successfully delayed its closure.

“Nobody wants to be a refugee forever. A regional solution is the most viable solution for the Somali situation,” said Mr. Affey.

Mr. Affey, who previously served as the Deputy Foreign Affairs Minister in Kenya, spoke in Geneva yesterday following a visit to Somalia and to refugee camps in Djibouti, Kenya, Ethiopia, and Uganda, where 905,060 Somalis live – some since the 1990s. He also visited Yemen last month, where refugees face increasingly desperate conditions in a country torn apart by war.

Because of emergencies elsewhere – particularly in Syria and South Sudan – donors have been unable to continue their support.

In addition to dwindling food rations, Mr. Affey said that the ongoing drought in East Africa has led to further complications, including limited access to education and skills training, especially for young people.

“Refugees should be skilled enough, trained to prepare them for an eventual return so that they can participate in the reconstruction of their country. So that they don’t go back after 30 years without skills – within the camps we must create these conditions and possibilities.”

UNHCR began supporting the voluntary return of Somali refugees from Kenya in 2014. Since then, a total of 39,316 have returned. However, Mr. Affey noted that security and socio-economic conditions in many parts of Somalia are not yet where they need to be in order to support large-scale returns. He appealed to the international community to strengthen efforts to build stability in a country that has suffered under more than two decades of armed conflict.