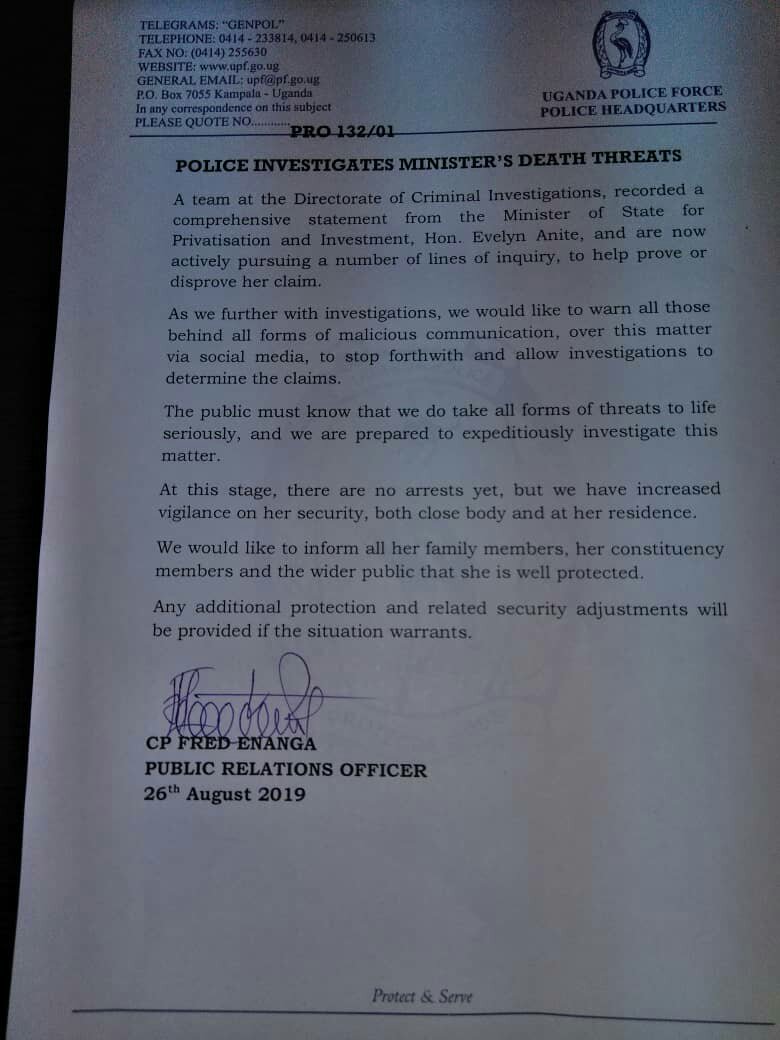 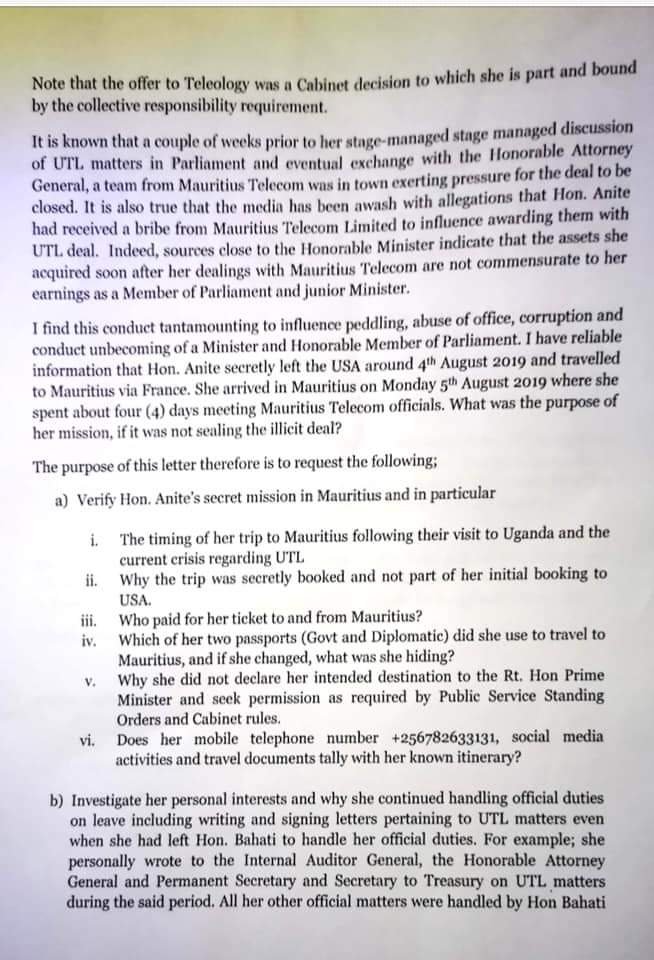 She had it all, she was a golden child of the President, the former radio presenter from Koboko, who became the Youth Representative MP for the Northern Uganda in 2011 and became the incumbent winner in 2016. Evelyn Anite in her second term became also a State Minister for Investment & Privatization. Where she has now shown force, but maybe she’s aiming to high, a bit to fast.

That is why the recent months, she has both expressed pressure on the clean-up for ownership, audit of and transparency surrounding Uganda Telecom Limited (UTL). A company the government had sold to Libyan owners, but had to re-corporate and restructure after the fall of Gadaffi. Now, this has turned a bitter pill for the loyal subject and minister. She has lashed out and said the mafia is out after her.

Certainly, she has ruffed some feathers, she has questioned some big-men, which will not accept to be hassled with. Anite has with her quest to clear the slate of the UTL, she has surely gone into the hidden secrets within the National Resistance Movement (NRM) and the government itself. Where she should have stayed away. As the ones who does that, is the likes of Muhammad Kirumira, Andrew Felix Kaweesi and so on.

They did all say similar things like Anite. They were on the rise and was also saying there would be a moment of silence, if you pushed the forces of power in the Republic. That is what Anite now is stating too. She calls it a mafia running the government, that means she is directly a part of racket herself. Meaning, it was cool, when she was a “made man” within it, until she crossed within the boundaries and codes within the mafia. This is what it seems, because, why else would she blast and rant like this in the public?

Anite is now going far, but sounding more like the opposition, than someone who is government. She could be mixed with Besigye or Bobi Wine in this matter. There is similarities in the usage of words. Because, the tale of going after the walking dead within the UTL is to costly. That the NRM doesn’t want to show the dark-side of the business and how its done. This is why, she suddenly shouldn’t continue to pursuit it.

Anite is therefore, receiving the hardship, which is usually intended on the dissidents and not the ones whose loyal to the projects of the President and his cronies. Evelyn though she was made and part of the inner-circle. Instead, she has crossed a path, which the NRM doesn’t accept. That is why Ante is in trouble and shouts out so loud.

Instead of winning, she’s continue to loose. Anite isn’t succeeding …. she is failing and not finding her way out of the trouble that she has put herself in. She could have let it all go, because this is more a ego-boost and to prove her place within the hierarchy.

She was a soldier, a loyal subject and a “made-man” but not one of them. An outsider, who got a big position. Now she is afraid of the enforcers, as the confidants and the consigliere advice behind closed chambers, maybe has aimed at her. Because, she broken a secret code and added pressure on something she shouldn’t have.

That is why she has fallen, why she’s trailing. She hasn’t resigned or even backed away from the mafia. She’s still there and trying to get through. But will she? Will she end up like others whose been taken out or is she another Abiriga in the waiting?

We don’t know, but she surely has fallen from the pedestal and is now a commoner with a fancy title. Peace. 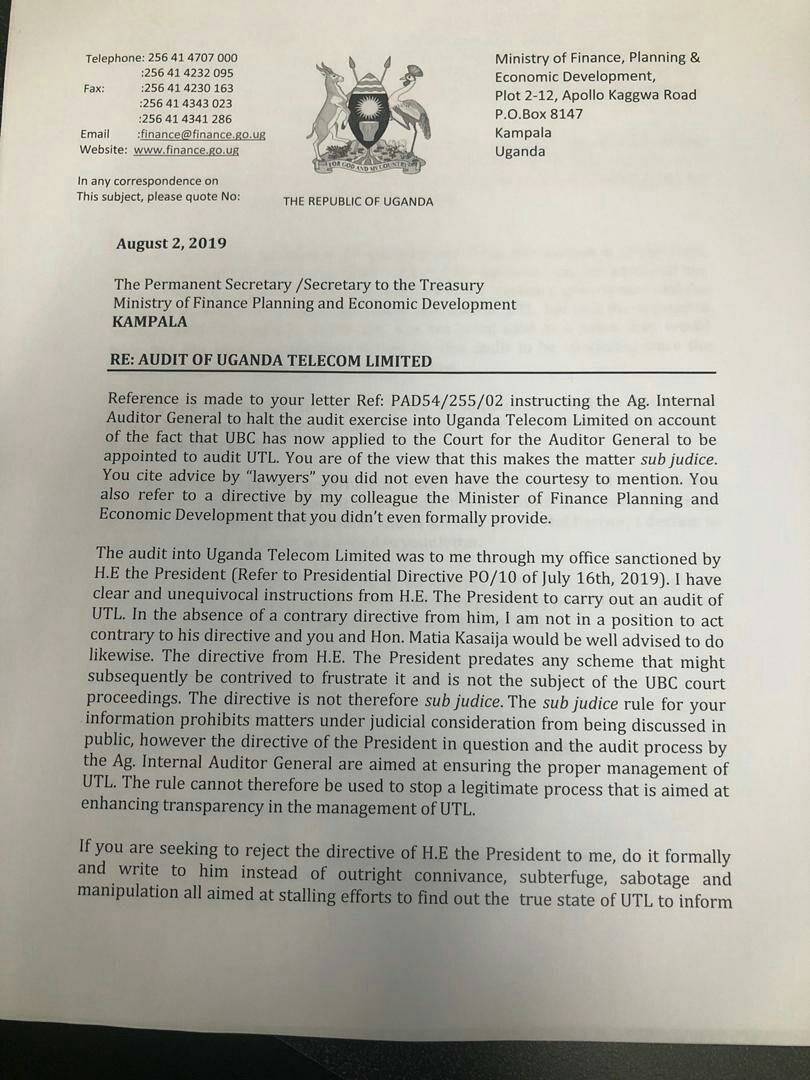 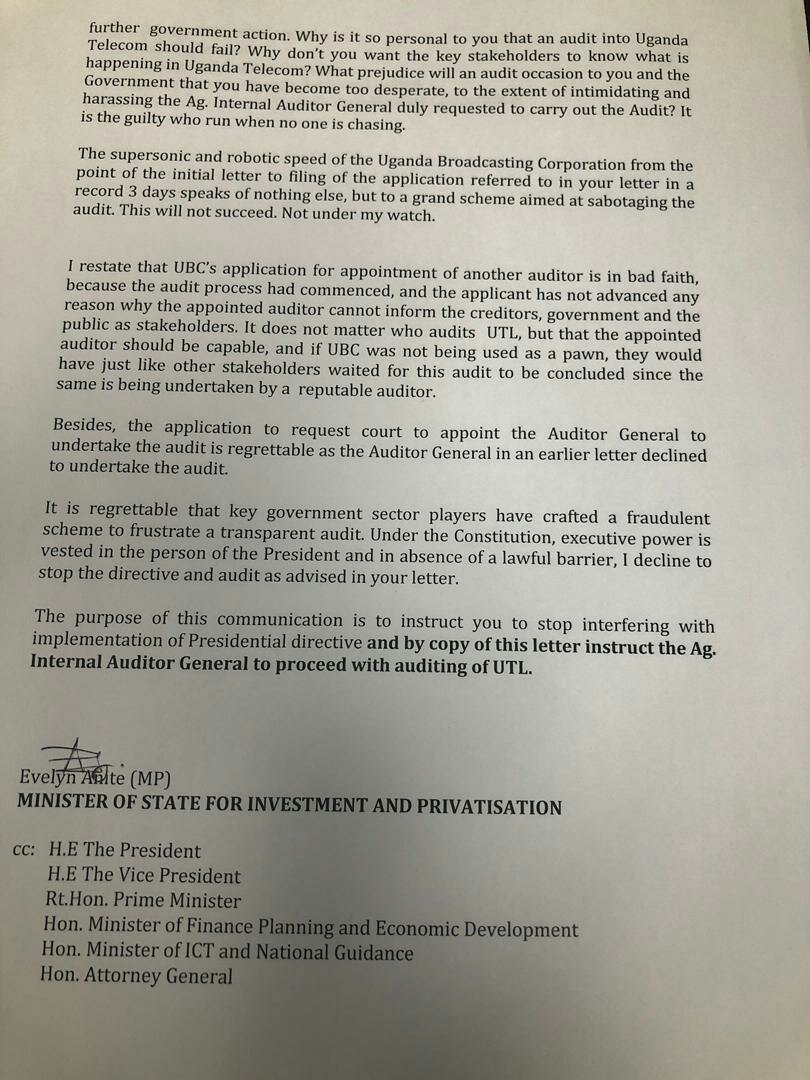 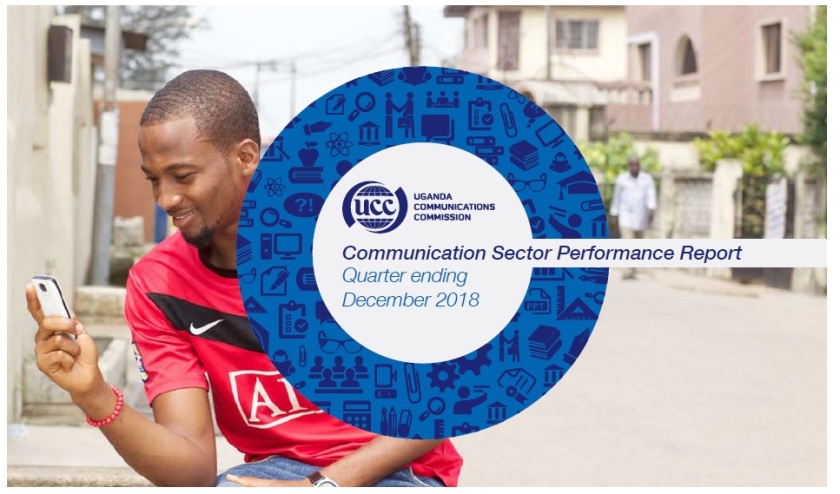 Today, the Uganda Communication Commission released their annual sector performance report of July 2019. It was really a bit funny look, as the state, the President and all of his handlers said the Over-The-Top Services would create a tax-base and revenue, which would benefit the state. That is why Uganda Revenue Authority (URA) had set up targets to streamline these new taxes.

I will show more of the fun and explain, as the UCC report really shows how malfunction and lack of due diligence hurt. But first a previous calculation, which was stated to the media. To show how much lack of tax-base the OTT had in 2018, as it was implemented in July and keeps pushing to this date.

Daily Monitor Reports: “Government collected Shs20.5b from social media in the last quarter ended September, according to data obtained from Uganda Revenue Authority. The tax, which was implemented in July, was however, less than the Shs24.9b target that URA had hoped to collect in the period. URA has a monthly target of Shs8.3b. The tax was introduced in the Excise Duty amendments of financial year 2018/19 requiring all social media users to pay Shs200 per day, before accessing certain platforms such as Facebook, Whatsapp and Twitter, among others. Government intends to collect about Shs100b before the end of the 2018/19 financial year” (Christine Kasemiire – ‘OTT raises Shs20b in first quarter, URA fails on targets’ 07.11.2018).

Let’s first do the math, accordingly, as the URA monthly target is 8,3bn shillings in revenue, every single month. A quarter of a Financial Year is 4 months. In today’s UCC report, it shows the numbers for the Q3 and Q4 of 2018. Which means, that states revenue from July-September and October-December in the previous years. By these standards its 8,3bn X3 to get the supposed of any given Q. That is 24,9bn shillings is estimated to earn per quarter.

However, the UCC report states that in the Q3, the revenue was 12,696,558,400 or 12,6bn shillings which is only about half of the anticipated revenue. The final quarter or Q4 isn’t much better:12,952,833,800 or 12,9bn shillings. Of the estimated earnings, the state is nearly able to gain about half of its target. The market and the consumers are not contributing or using the phones as much as they thought. What is striking if you combine the two quarters of revenue is that the state earned approximately 25,5bn shillings, which is sadly just above one quarter estimate of the URA in supposed revenue on this tax. The estimated earnings of the period would be about 49,8bn and this shows the state managed a deficit of about 24,3bn shillings. That is about on quarters earning not happening at all. Thats a giant shortfall of cash and the URA/UCC needs to explain the Ministry of Finance this one, because this a major loss of promised funding for the state.

This shows how failed this tax is and what a waste of enforcement and making the tax in its first place. This isn’t fun and games, but a way of misusing power to tax people, just because you find something obnoxious. That is how it seems, since the President want to stop the gossip online and such. Stop spreading of information and ensure that poorest cannot afford to get online and use the OTT services. Because, that what this tax does. Peace.