Archive for the tag “Global Buses”

NRM Bus Company Ltd – “Ferrying crowds for the benefit of Party NRM-O”; In Service since 3. November 2015! 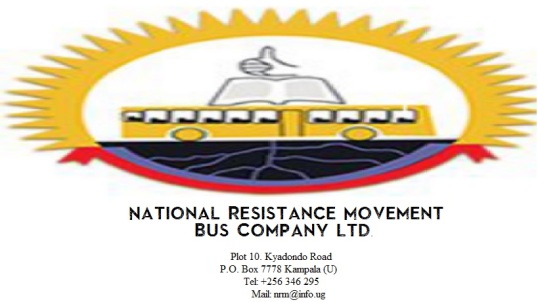 The National Resistance Movement Bus Company Limited started its operation on the Presidential Nominations Rally on the 3rd November 2015. The buses was used from the districts and picking up ‘Crime Preventers’ to the Campaign venue. As the successful launch was not without defects as the Company stranded the people in Kampala instead of ferrying them home.

The NRM Bus Company has verified the actual value of their “car-park” as they have 168 buses. Which is being used to serve the company and make sure they deliver people to the campaign venues; the people themselves don’t want to show up without being payed and getting a free ride there. The people who usually doesn’t attend the rallies as the villages and small towns to get to the main venues to see Bebe Cool, Jose Chameleone and the Executive Director of the NRM Bus Company Honorable Yoweri K. Museveni. The one man who has used some of his funds to start the company!

In the November 2015 alone the Bus Company used UGX 140m on the expenses on the company side (Alliance for Campaign, 2015).

Operational Launch of the Company:

On the initial launch of the company for the nomination rally the Company used the NRM Secretariat UGX 45m to have enough funds to get people from Lyantonde and Mubende to Kololo Independence Grounds on the 3rd November 2015. From the Area the Company had promised to send 15 buses, but only 9 showed up; so the Company did not deliver that day to expectation in the area. Buses from Kololo were also using the service of the Company from Kabale to the campaign venue.

To the Luweero rallies the Buses was pre-occupied to get the people from the villages to the venues on the 9th November 2015. They ferried Crime Preventers that was stranded after the Kololo break-down to the rallies in Luweero.

On the 25th November the rally in Kotido town, where people from the villages had been ferried to; but the Company had also engagements in other parts to secure attendance for the party that owns the Company, though the delivery was sub-par in Kotido as the people we’re stranded as the Company was not prepared to facilitate people home on that occasion.

The Operation on 12th December the Company had a successful business as they used 30 buses from Mbale to Bududa. The ones that took the opportunity that day in Mbale got UGX 5k and free yellow t-shirt.

The Company suffered a big set-back in Mbale at 12th December as the truck-drivers was not fairly compensated or the former pledges of the NRM Company was not being kept. Even when a Government Official in the Region District Commander (RDC) was going to negotiate with the Company men, they still refused.

On the 18th December the Company had a sufficient delivery as the Campaign in Tororo was filled to the brim with no locals and that people from all corners was payed to attend the rallies that day. The people came the day before and Company surely did get people to the event on the 19th of December.

On the 4th January in Kabale towards the main rally at the Kabale Stadium, from all around the villages in the district buses was travelling and giving money to attend the campaign rally. The amount of cost for this rally was expected to cost the company UGX 500m.

They had operations at the 6th January in 2016 to get people from Ntungamo to Rukungiri to make sure that the people arrived safely to the Rukungiri campaign venue. The worst part of the delivery was the village people who had joined and taken part of the services on the 6th January in Kihihi, was stranded at the Kihihi Police Station; so the Bus Company did not live up to expectations.

In January they had a central in Mbarara while making sure the affiliations and hired extended companies like 11th January the Global Buses to ship people to the Campaign venues. As the 13th January hired another buses to make sure they got people from the districts around the area to get people to Bushenyi. 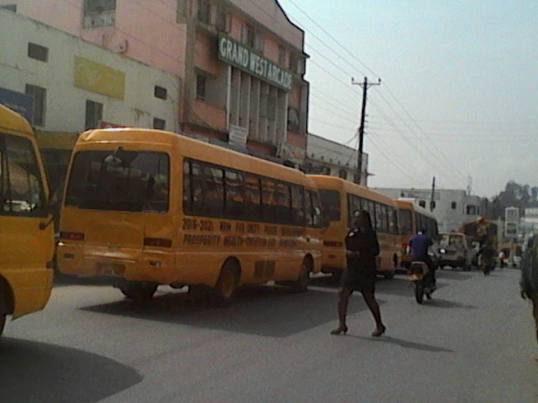 On the 2nd February the Company fixed trucks and buses to get people to the Sembabule rally of the owning party, but did not facilitate to get people home, as they we’re stranded, the Company was off to other engagements and rallies; was also not ordered to get people back home after the rally.

On the 4th February the Company used it resources and got people as far as Kalangala to be a part of the rally at Masaka. They used rented and owned trucks from the long distance areas to make the full with people.

On the 8th February to be able to have enough people for the rallies that day, the Bus Company had operations in the Busoga Region, giving T-Shirts and UGX 20k and the ride to the campaign venues of the day. As the locals that day would not attend on the rallies there.

On the 10th of February the Company had troubles with the arrangement and buses where in the shop so the service delivery was substandard and therefore the amount of people at rallies in Entebbe as the mechanical problems destroyed the result of the company that day.

On the 11th February the Company had hired Global to be successful again getting people from Mbarara to Kampala to attend the venue graced by the company.

Today (12.02.2016)  in Kampala the NRM Bus Company have been busy with offering ferrying services from Central Parts of city to Kawempe main rally, as the operations drops UGX 5k as the Bus Service was in operations in Kampala.

Basic Part of the Operation of the NRM Bus Company Limited:

As we see the operations since the beginning has not been perfect, but that is to blame for the mobilisers who has not address the central organizations as Mike Ssebalu as the NRM Campaign Task Manger or Gen. Tukumunde “the money man” who hasn’t fixed the money from the owning party. As the NRM Bus Company is not yet a fully functional enterprise or limited company as it will be after the 19th February. Then the NRM Bus Company Limited will both dissolve and sell the buses, so they can be customized for those who want the buses that have tested the worst roads of the country while driving from village to village. Our main spokesman in Ofwono Opondo who will delegate the issues that you have through the Uganda Media Centre, while Jim Muhwezi and his men in the Ministry of Information and National Guidance, as they take the questions you may have on the NRM.ug as that is in their working title. So the Press if they have issues should either address Hon. Opondo or Hon. Muhwezi. The Executive will just address the bus-matter if the participation is fully in his hand and not set standards by anybody else. If you have issues with procurement or allocations as the party sometimes as owner delivers the payments slow, be assured the Dr. Ruhakana Ruganda will come with the necessary facilitation to make sure the venue and people have the money that they deserve for being a part of the Bus Company, A customer and also a citizen at the same time. Peace.

On the 11th January he hired the Global buses from Mbarara so there we’re no buses going from Mbarara to Kampala. The where even more hiring nearly every bus in the town was hired to ferry people to the Boma Grounds for the campaign in town. Therefore all lorries and buses where driving shuttle-traffic to get the full stadium that the President wanted that day.

As the campaign rallies going in Mbarara the UPDF or the army held the public so they wouldn’t leave the venue while the campaign rally was going on. Sure the Isingiro clips are hurting his mind and character.

There was the reports coming in that on the 12th January 2016 as well, the buses was hired to ride around in the districts to the venues of Mzee, so the buses was hired from Mbarara and if you thought you we’re travelling to Kampala, you were wrong. Even if maybe there one or two who made it, the most of it went to the districts as the Bus Pack where very silent and empty. As they we’re hired by Mzee.  UPDF was even driving around the campaign venue with vuvuzela’s and whistle’s chanting in the town for Mzee.

In 13th January 2016 the NRM needed to do something to get full campaign venues for Mzee so they hired buses and shipped people to the venue in Bushenyi district. They paid the people 20,000 shillings and gave them free yellow t-shirts. As he was in Ibanda there been rumors all over Eastern District that Mbarara we’re there no buses today because they was hired to ship people for the mighty Mzee, who is surely using his war-chest to hire crowds instead of getting crowds to come to him. What a noble idea and what a way to be with the people, I am sure he is going to ship people on the 15th so they can’t watch the Presidential Debate that is useless. Hope they get more than 20,000 shillings for their travel and listening to the rewind of pledges from Mzee. Also, hope you had no plans of travelling from Mbarara to Kampala all buses where in Ibanda under the paid direction of Mzee! Peace.