A Politician that people is tired of, as we saw in Isigniro where the public and locals went in the middle of Mzee speech. The Youth of Makerere University Business School (MUBS) or Nakawa and locals, went away from the campaign rally today when they had seen and listen to Jose Chameleone and Bebe Cool; then they we’re ready to take a Sambusa or rollex in town instead of listening to the same old pledges of the President. This should be a worrying side for NRM as the YOUTH doesn’t eat his words and pledges, instead they comes for free music and entertainment, not HIM! Or his National Resistance Movement…

How did the NRM get people there today:

“People of Nakawa division a suburb of Kampala City today got a share of the taxes they pay when the Ugandan dictator Yoweri Kaguta Museveni went to campaign in their constituency.  Not only empty yellow buses were moving around carrying people to Makerere University Business School but also taxis were moving all over the division. This time it was clearly seen when these vehicles were making stop overs in various places carrying people to MUBS the center of campaign for Mu7 today.  Each time a person enters the vehicle, he or she is given 10,000/=(Ten thousand Uganda shilling cash)”. 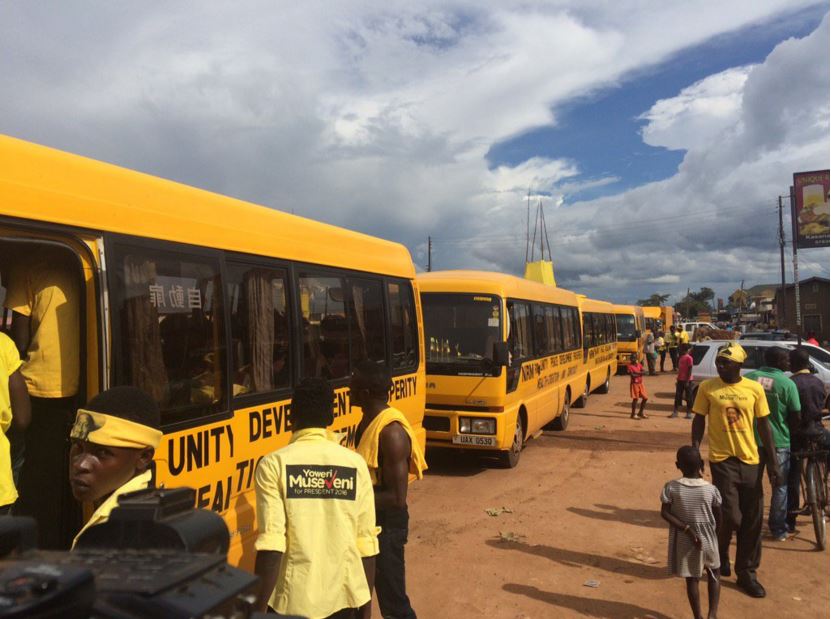 The NRM owns 148 Buses and has 15 Trucks to ferry people under their “NRM Bus Company” or “NRM Transport Limited”. As their main business since Nomination Day in November 2015 has been Voter Tourism. What does the people say? Peace.