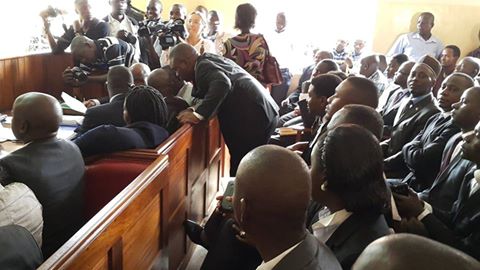 “If someone files a case against you that you believe to be foolish & lacking in merit, don’t get a mob. Get a lawyer. They know what to do” – David F.K. Mpanga

The Police Brutality case at Makindye Court today where weak and flawed as the IGP Kale Kayihura have for two days now let the people in his honour be able to demonstrate against his courtship. Unprecedented in the Uganda we know today where the Police crackdown on any dissidents and any reactions of the citizens. So the ironic part is that it is a just cause to celebrate and demonstrate for justice for the Police Officers, which brutality attacks innocent civilians. But if the civilians and citizens demonstrate for another cause that isn’t for the state than the Public Order Management Act (POMA) comes to effect immediately.

“Pro-Kayihura placard-carrying protesters inside Makindye court where police boss is expected. Nicholas Opiyo, a lawyer who has been at the court since 6:00AM says the group was transported to the court and “deployed” by the Kabalagala DPC” (NBS TV Uganda, 09.08.2016).

“Makindye court has allowed Director of Public Prosecution to formally file application for consideration to join case as court adjourns to 29th August. IGP Kayihura and seven other officers have failed to appear in court” (NBS TV Uganda, 09.08.2016).

So as we speak and nobility of men is supposed to be profound, but that is dimming and getting grounded at Makindye Court as the Police Officers charged never got summoned and the Inspector General of Police (IGP) Edward Kale Kayihura never turned up. As the importance of the matter wasn’t there; he and the Police Officers knew it was fraudulent as all the political cases against opposition in courts this year. Therefore the validity of showing up to it was pointless. The result of it and the determined subject doesn’t need take a stand for the questionable behavior of the Police.

There the Mayor of Kampala who appeared in Court wrote this:

“I can’t believe what am witnessing at Makindye court; total breakdown of rule of law. Now confined in the Magistrate’s chambers as the situation in court’s premises is fluid” (Lord Mayor Erias Lukwago, 09.08.2016).

The irony about the demonstrators they we’re all shipped in and didn’t become more. As the Police Officers have let them in peace; there is also evidence of that one guy have written the placards with the same handwriting in 5 languages. As the supporters of the Police are hired men who demonstrates; therefore the hired demonstrations are okay in Uganda, but public dismay is cracked down with force from the Police Force. Therefore the Court and Case in the Courtroom today even it if has released or given any indication of justice today.

As the Police gave the Police Supporters leeway that they even went into vandalism and not only threw water on Lawyer Abdalla Kiwanuka, but also went into destroy the lawyers car on the outside of the Court.

The men like Lord Mayor Erias Lukwago and others who went to be witness in the case against the Police have been left behind and under Court Arrest by the same Police Force that we’re in question for their behavior. Also with his is Kawempe Local Councilor Muhammed Ssegirinya who presided with the friends of Lukwago.

“Barricaded in the Chambers of the Chief Magistrates Court of Makindye. Rowdy protesters want to beat up lawyers representing complainants” (Nicholas Opiyo, 09.08.2016).

Reported also be even getting to the Court, there we’re not rumors but in the press that a set of witnesses had backed out of affidavits and their testimonies as the men didn’t show up or wanted to. Because the reports saying some men or woman where paid by the Police to be silenced, if so that is worrying and signs that the Police doesn’t care to what extent they follow orders for the Executive in the republic.

Instead of showing up for his court case IGP Kale Kayihura continued with his ordinary work and we’re meeting with foreign dignitaries as the Algerian Police delegation at the Central Police Headquarters in Kampala, as that is more important that actually answering for his misgivings and the brutality from under his leadership. Just like he didn’t care to show up for the Parliamentary Committee recently to answer their either. If you ever wonder if the man thinks he is above the law, the reality is that he thinks he sets the law and justifies it by being the General and Police Commander.

Because of the created havoc on the outside of Makindye Court Lord Mayor Lukwago had to be evacuated by the Police Officers through the Police created protest. The same lawyer of Chapter4Uganda Nicholas Opiyo was saying to the Police it wasn’t safe to leave the premises for him as the demonstrators are in lynching mode.

How Lukwago left the Court:

So let it be known to what extent the IGP Kayihura and the NRM goes to silence the ones questioning them. This happens as the mob of demonstrators are now going against the petitioners who questioning the brutality of the Police towards demonstrators and civilians who pass by Opposition Politicians.  The men demonstrating for Kayihura can throw stones and act as vigilantes without any cost, but if somebody else did for a cause against the ruling regime they would been taken to prison, to court or being beaten senseless in the streets.

This is just not justice for none, not for the citizens and not for the Police. The questions remain if the demonstrators we’re doing for somebody else if they would have done while being guarded by the Police officers themselves. The Justice and rules of law are a charade at this point. The legality and the means of laws to regulate and set the standard for civilian liberty is doubting when the demonstrators works without any sanctions. They we’re shipped by the Police early in the morning and harassing the petitioners after the Court where adjourned. This proves the mentality of the rules and fairness in the Republic. Something the IGP and President Museveni must be so proud of. Peace.