Mrs. Kamya sold her soul… or was she a ‘Wolf’ in ‘Sheep’s clothing’? 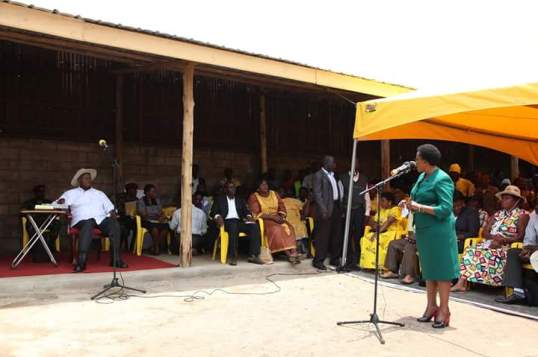 “I want to pledge that in 2021, you will get 80% in Kampala. The little problems we inherited will be solved. Museveni is still energetic. There is no one in Uganda who has more stamina than President Museveni” – Beti Kamya.

Well, there certainly someone who says she has been mole for a long time, like the other ones in Opposition who has been “undercover” agents or needed opposition to the regime to make the National Resistance Movement look good. Therefore the articles earlier now are contradicting her actions.

There even been stories of her ways of trying to stop the Reform Agenda Youth from doing their activities in 2003 as they we’re thinking of applying to become a Political Party. Something that never happen even if she tried to facilitate it to become a working force, as she told the NRM regime at the time; which is the same or much of the same as today.

It is a reason why Uganda Federal Alliance really isn’t a viable party or a party that has been under siege, that is because it is a front for democracy and inclusive government that even not-so Honorable Ofwono Opondo would portray on NBS Frontline. Something that is not true.

Even if Hon. Opondo and Hon. Frank Tumwebaze speaks the direct words of their master, that doesn’t make that a fact. So now that the former Opposition is sounding more like the National Resistance Movement Secretary General Justine Kasule Lumumba. Beti Kamya could just her double. If not she has been a double agent trying to get involved with opposition movement to tell tales to the regime. As I told before, I never believed that President Museveni wanted to have Multi-Party System. He only released because of popular uprising and donors who he wanted their monies. There we’re two elections for releasing it so, it wasn’t like he didn’t try to avoid it after becoming the President. We can all remember the same kind of attitude with suspending parties in the beginning of his reign, if people have forgotten that as well?

So that Beti Kamya and her Uganda Federal Alliance (UFA) is nearly non-existence, the newly created party in 19th July of 2010. The party has had issues with ghost-members right after the creation because the founder wanted to look popular enough to carry an opposition party. I am sure many have forgot that tale of faking numbers to look wise and smart. Time is a wasting…

So with that in mind and with the stories from the past; you kind of can have the feeling that her aggression and words against President Museveni is more a populist approach gone wrong or she did it on accord with the donors of the so-called honest-to-God federalism party that had no apparent impact. Therefore when she had walked the water for the President she got offered a Cabinet Position, to be the voice of the NRM and hammer the voice of the President to the people of Kampala.

Therefore that she promise a President that for the moment is not edible to stand as a candidate in the next election; promise that leader and man that he will get 80% of the votes is scamming and promising to rig the coming election. But hey the NRM party is busy bribing MPs and such to secure the abolishment of 75 Years limit to the Presidency. Because in the great nation, there are partly still not anybody else who has the right or can justify taking over for the grand-old-man-with-the-hat.

That is why the political player and tease of Beti Kamya seems like she been playing opposition, but might been a smidge undercover agent. So the wolfs in sheep’s clothes exists as the President wants to have ears to ground everywhere. That’s why he wanted the centralized government to control the Resistance Councils and the now Local Government from the State House. So that Kamya been a useful tool, but now her true character is out. So who is more like her is something we can question and wonder.

That being the likes of Major General Benon Biraaro who just surface towards the campaigning of Presidential elections, but after that goes back to the bush and works in silence after his duty is done. You can question if people like him is pawns on the chess-set for the almighty master of Uganda.

Now that President Museveni has hired and surely paid back for service rendered to Beti Kamya, what is his next move and who else has tried to infiltrate other parties to control the nation from the inside of his chambers? Peace.