“A mirage is a sort of optical illusion, a reflection of light that can trick the mind into interpreting the sight as an apparently solid thing. It makes sense, therefore, that the word mirage has its roots in the concept of vision. Mirage was borrowed into English at the dawn of the 19th century from the French verb mirer (“to look at”), which also gave us the word mirror. Mirer in turn derives from Latin mirari (“to wonder at”). Mirari is also the ancestor of the English words admire, miracle, and marvel, as well as the rare adjective mirific (meaning “marvelous”)” (Merriam-Webster – ‘Mirage’ 02.04.2018)

The Independent Boundaries and Electoral Commission (IEBC) announced today, that CEO Ezra Chiloba would be put on temporary leave after an internal review and report. This was a decision made by the Commissions Plenary Meeting on the 6th April 2018. Still, what is striking the reluctant attitude towards delivering any substance of reasons. This isn’t the first time the CEO Chiloba was put on this sort of leave, then he was chilling at a Hotel, while the Fresh Presidential Elections was on-going.

Not like the IEBC can be trusted, as the breaches, the server connected to Cambridge Analytica, the death of the ICT Manager Chris Msando, the tenders to OT Morpho for the fraud of BVR Equipment, combined with Safaricom and the ones already printing the ballots. The whole 2017 in the eyes of IEBC should be how to shatter all public trust in one institution. There was two rounds of Presidential Elections and none of them was trustworthy, because of all lacking performance of the IEBC. I don’t care if the Carter Center, American Ambassador or the IGAD/AU Mission praise the events.

The lack of respect for voter registration, the bounds of how many who could actually vote differed with times. The voter turnouts was extreme and abnormal, the evidence of corrupt forms and the lack of oversight was evident. As even parts of the political players gave-up following the IEBC and their inner-works, it was a shoddy display and lack of character. The display of ignorance and cooking the books was the mission of the IEBC. They worked so hard to make things official, but in the end. Only the naive or the ones paid to, would believe the numbers and the calculations. The 26th October 2017 and the 8th August Election 2017. Are two strikes of injustice done to the Kenyan people in favor of the Jubilee Party.

They can try to say, we are putting him on leave, so Chiloba can learn his lesson. But they have used that trick and it was all in vain. That because the system is made for rigging, because the political powers to be, want it rigged. Kenyatta and Ruto wanted it rigged and secured in their favor. They couldn’t care less about the will of the people. They are useful props in the Harris Media/Cambridge Analytica/PSCU messages and press releases. Rest of the time, they are just a hassle that comes with the job.

The IEBC cannot use the same mirage, the same trick twice, they did the same to him in October 2017. Now they are pulling the same plug in April 2018. Like we don’t know the IEBC is lying to us yet again. Because someone wants to push the agenda and make a forgery look real. It looks like Monet, but the brushes is not. It is a make believe, a copy and a fraud.

The IEBC has to work harder to be taken serious. We know they are a machinery to deliver the wanted results the Jubilee wants. To say something different would be taken as a fool. I prefer not to be, especially with knowledge of how these people rig the game. The end-game in favor of the rulers and policy makers.

The Chickengate brought down one part of the IEBC, but the not the part of the rigging, neither the part of suspect tenders and corporations ready to cook the books. So the IEBC got a lot of work to do and that does not involve playing tricks with society. Unless, that was the brightest idea Cambridge Analytica could come-up with. Peace. 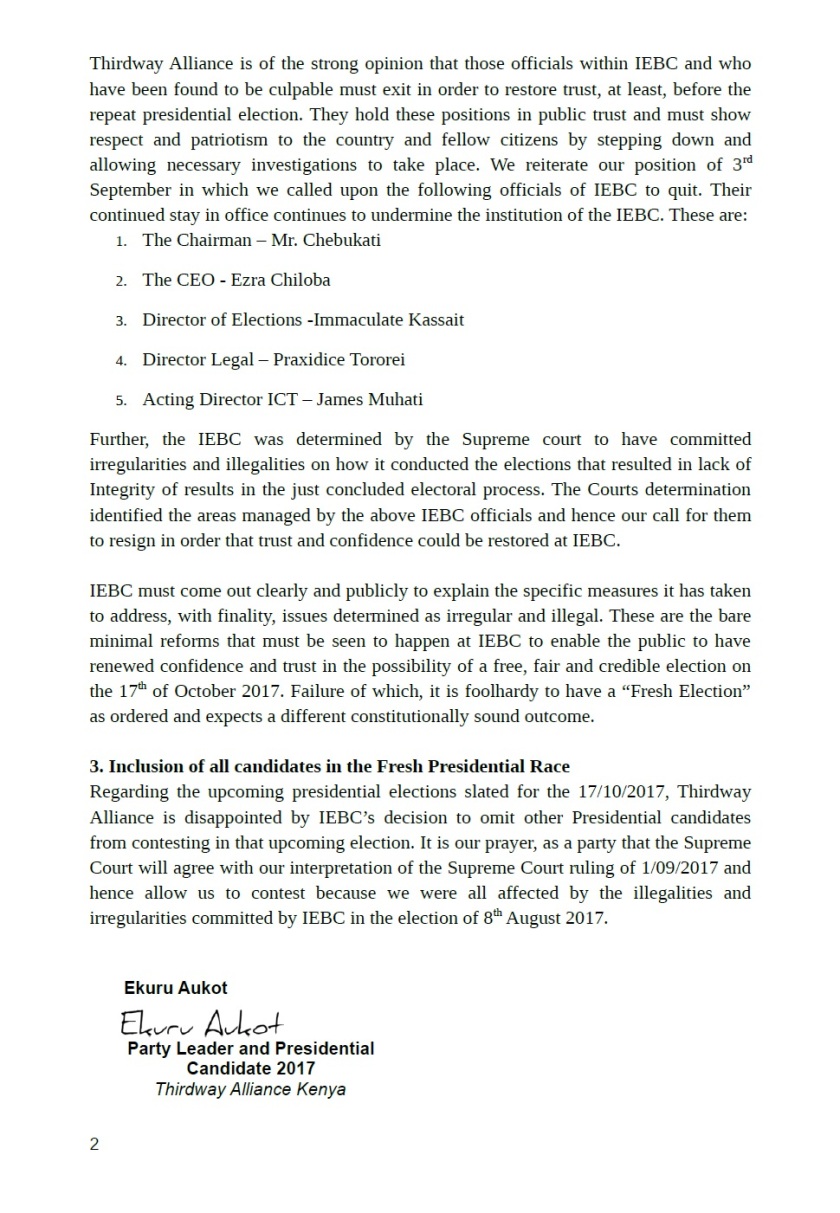 The Jubilee Party are clearing changing their tune from 2016, when they was bravely saying the CORD or now National Super Alliance (NASA) was unlawful with their disregard of the law with their demonstration. So, that the Jubilee are now targeting Court Justice David Maraga, proves the ruling regime is cunning and not caring about their legacy.

Since on the 1st June 2016, the then President Kenyatta said this:

“It is particularly saddening that those who were at the front in supporting the enactment of the Constitution are now turning against the same laws” (…) “We must be a nation that respects and follows the rule of law” (Kenyatta – ‘Be wary of selfish leaders, President Kenyatta cautions Kenyans’ 01.06.2016).

So why does the CORD/NASA has to follow the rule of law, but when the laws apply to Jubilee, they have to get rid of the Court Justices? They are now this September having campaigns to make damage of the reputation of Maraga. The man behind the team that nullified the Presidential Election of August 2017. This has clearly hurt the Jubilee Alliance Party, therefore, they are attacking the ones who did it.

Jubilee are hypocrites, who in power tells the opposition to follow the law. But the moment it hit the fan, they are attacking it harder and wider than what the Opposition did. The opposition went to the streets to change the IEBC and the leadership after Chicken Gate. It’s like the corrupt leadership of IEBC wasn’t an issue and is still not an issue. If the Jubilee cared about governance and transparency, they wouldn’t attack the courts and judges who did their job. But they would challenge and reform IEBC, not save it and try to do the same as they did in August.

That is what the Jubilee are doing, they are saving the leadership and trying to spin-it in favor of them. As the days to October get’s closer. Instead of actually making a difference. They are attacking the CJ Maraga, because they don’t know better. They doesn’t care about rule of law, only about their own power and control. The Jubilee Party wants to control it all and take the power by all means. So the Jubilee are not respecting the Courts and their mandate. As they are going to war against Maraga.

It is sad to see the levels of disrespect, the levels of unbound judgment of the judges. They should respect the Courts. But they don’t when they want to Maraga to lose face in their campaign. It is insane and sad. The Madness should stop, the crazy train should leave Mombasa and not come back after a party on the beach. It is time to eat a chapati and chill. This sort of act is not presidential, this is not what to expect of a party of incumbent. The attack on Maraga is childish and not respecting the Courts, the laws or understanding the Constitution. The petition should be dismissed as the nonsense it is. It is a witch-hunt, without a witch! Peace. 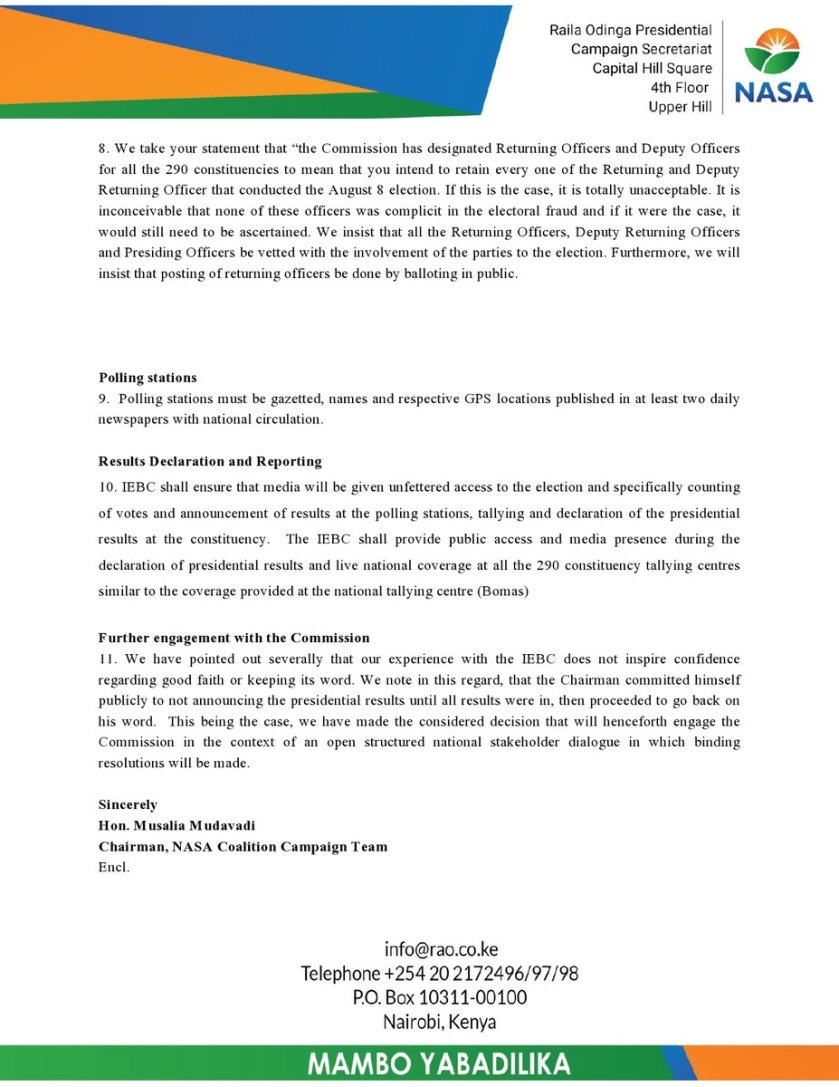