Last year, the Chama Cha Mapinduzi (CCM) and President John Pombe Magufuli issued amendments in 2018 on the Political Parties Act, which was issued this year. This is laws that is severely restricting the Political Parties in Tanzania. Today, it is official how seriously damaging these laws for the other parties in the United Republic. They really warned about the wrath and rage of the authorities. They are coming with an vengeance, like there is no tomorrow.

Today, there is released a letter sent to ACT Wazalendo, Zitto Kabwe party, one of the major opposition parties in the Republic. Today, Sisty L. Nyahoza letter to the party, warned the party, that it could get deregistered, because it hadn’t fulfilled it requirements concerning the release of information the annual statements on the finances of the party for the year of 2013 – 2017. Since, that is the matters of the state now. This is the statement of the Registrar of the Political Parties, which sent this letter or the Amwani ya Simu ‘SIASA’.

Therefore, today is a sad day for the democracy, this is a bad day for the Republic. As this was warned with the new legislation and knowledge, that has been out there since early 2018. It was on the horizon, but nobody wanted to warn of the rain, sun or even the snow. Because, everything was fine and dandy. Alas, if it is to much sun, it become drought, if it is to much it is a flood and if it is to much snow, there is a snow-storm. Therefore, the reaction of today wasn’t shocking nor surprising, but awaited.

The Tanzanian government became one step further with the amendments on the Political Parties Act. Even if the President and CCM claims otherwise, but when it becomes this easy to deregister opposition parties, shouldn’t the CCM also show the same transparency or is it cool; since they are in power and controls all parts of government?

We know President Magufuli is a whiny little bitch, who cannot muster any courage or balls to stand-up for his actions. A President that wants to be high and mighty, but acts like a coward. That who he is and that why, laws like this exists. Because, he doesn’t have the will or the ability to just install himself as the grandest man ever ruling the United Republic. The deity amongst men. That is who Magufuli is, at least how he acts.

It is time to just get his wish. The genie is out of the bottle and yet another step to ONE-PARTY STATE is there. Since, the Registrar of the Political Parties issued this warning and certainly with the knowledge of what the authorities has done already to the Opposition. The CCM has ensured hard life for the opposition and now it turns even worse.

Now ACT Wazalendo is in dire straits, unless the Registrar shows mercy, but if by history of the what the authorities does in Tanzania. In a short amount of time, the ACT Wazalendo will be over with. Then, it is the next victim… whoever that might be. Peace. 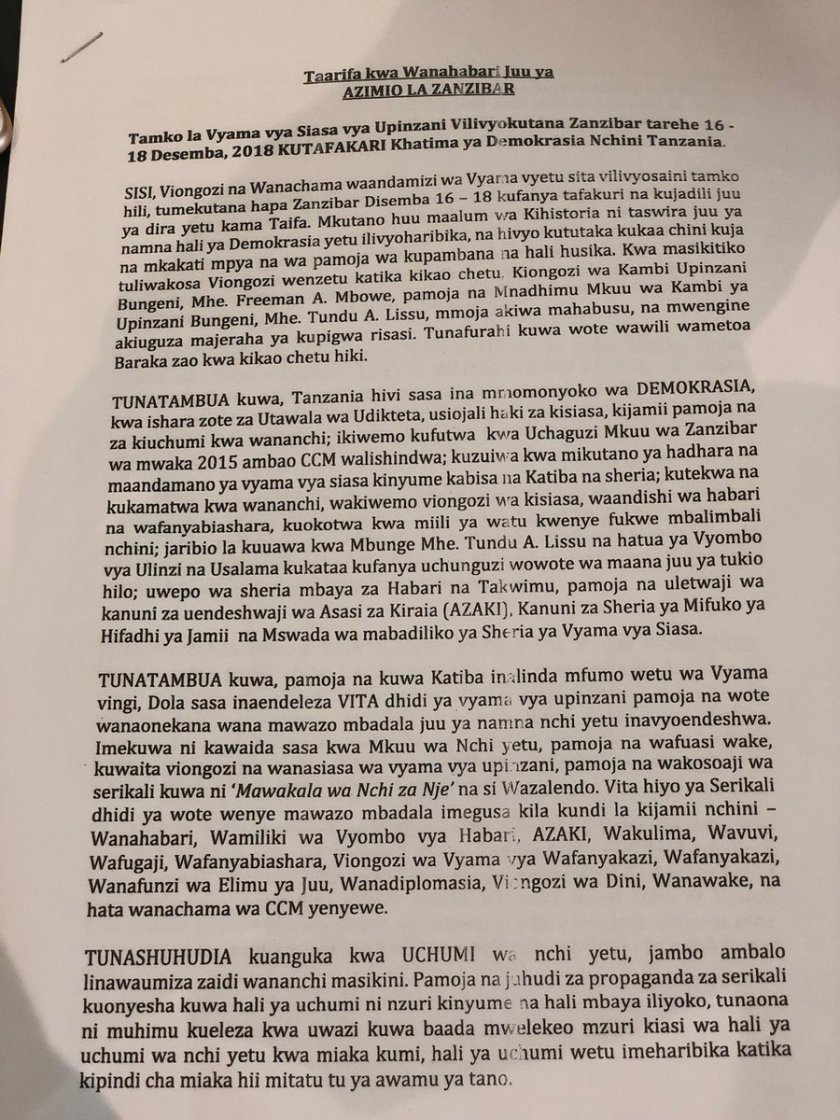 A Joint Declaration by Leaders and Senior Membersof Six Opposition Parties who met in Zanzibar on 16th – 18th December, 2018 to deliberate on the State of Democracy in the United Republic of Tanzania

WE, the leaders and senior members of the undersigned six political parties, have met here in Zanzibar from 16th to 18th December, 2018 in order to reflect, discuss and agree on our common vision for the future of democracy in the United Republic of Tanzania. The historic meeting here in Zanzibar is a reflection of the extent to which the democratic and human rights situation in our country has changed, thereby leading to unprecedented actions on our side in response. Keenly missed during the discussions have been our two colleagues, the Leader of Official Oppostion, Hon. Freeman Mbowe and the Chief Whip of the Opposition in the Union Parliament, Hon. TunduLissu, one of whom is languishing in prison and the other recovering from an assassination attempt. Both of them gave their blessings to this meeting.

WE recognise that Tanzania is facing backsliding of democracy, with all signs pointing to institutionalization of an authoritarian rule that ignores political, social and economic rights of our people. This trend began with the annulment of October 25, 2015 Zanzibar general elections after it became clear that the Civic United Front (CUF) was heading towards a decisive victory. The move was then followed by banning of live coverage of parliamentary proceedings, banning of legitimate political activitites of opposition parties, kidnappings, abductions, and arbitrary arrests of people, notablypolitical leaders and activists, journalists and business people, assassination attempt against our fellow opposition leader and outspoken member of parliament, Hon. Tundu Lissu and absolute refusal of the state to investigate the matter in a purposeful and concrete manner; passing of repressive laws such as the Media Services Act, the Statistics Act, the NGO regulations and the Bill for Political Parties (Amendments) Act.

WE recognise that, despite constitutional protections ofmultiparty system, the state is currently waging an openwar against opposition political parties. It is becoming a norm nowadays to hear state leaders and their supportersbranding opposition politicians and government critics as unpatriotic and that they are “foreign agents” and “imperialist stooges”. The crusade against critics of the regime has spared no one in the country from the media, civil society organisations, farmers, fishermen, pastoralits, the business community, trade unions and workers, faith leaders, the diplomatic corps, women and girls, and even critical CCM members.

WE are saddened by the crumbling state of our economy which affects the vulnerable and the poor in our society. In spite of the attempts by the regime to spin the situation, we feel it is imperative to publicly and openly state that within the space of three years the country has seen the reversal of even the little achievements that were registered in economic performance. The economic meltdown that this regime has brought will take at least a decade before it can recover and begin to provide for our citizens’ economic opportunities as required for by the constitution. The situation is no longer tolerable. ENOUGH IS ENOUGH!

WE recognise that it is our responsibility as leaders and as citizens of this country to save our country from this state and safeguard our democracy that meets the needs and aspirations of our people.

WE declare that time has come to renew our commitment and strengthen our solidarity in pursuing a national agenda against rising authoritarianism, an agenda that goes beyond individual interests of our parties. This will require courage to withstand the onslaught that we will face from the regime, firmness in our solidarity when attempts will be made to break it, and commitment towards inviting and incorporating other potential allies as equals in this movement.

WE declare that Freeman Mbowe and Esther Matiko,who are currently held in remand prison, are political prisoners and should be released immediately. We will engage in a concerted campaign to ensure that all political prisoners in Tanzania are either released or given access to justice and a free and fair due process of the law.

WE reiterate our stance that the imposed government of Zanzibar is unconstitutional and lacks mandate from the people. The results of the 2015 annulled election was a clear proof that CUF has won all the elections in Zanzibar since 1995 and that they have been prevented from ascending to power through state machinations and reversing of the will of the electorate. Time has come to restore electoral justice in Zanzibar.

WE pronounce that 2019 is a year of reclaiming our democracy and taking back our powers and rights as enshrined within the Constitution of the United Republic of Tanzania, the Constitution of Zanzibar and other enabling pieces of legislation. We will hold public rallies in any and all corners of the United Republic of Tanzania. We will not allow an unconstitutional and unlawful order to restrict us to our individual constituencies. If the government is threatened by us exercising our constitutional rights, we dare them to take us to court.

WE declare that we will unanimously embrace all citizens and all social and economic groups in the country willing to conquer their fears and join the grand coalition that we envisage to defend our democracy. We vow that we will no longer be silenced or intimidated; we will no longer succumb to the state sanctioned violence against our individual and collective rights and entitlements. We commit ourselves to taking this message of freedom to all our fellow leaders, constituents, and allies and support them in taking action, whether small or large, as a symbol of solidarity.

We resolve to form a Joint Committee that, among other things, will work with the likeminded individuals and groups to draw a comprehensive programme to reclaim our democratic and civil rights.

President John Pombe Magufuli are having more worries on the horizon, as the International Monetary Fund (IMF) in November went through the Financial System Stability Assessment (FSSA) there. Clearly, the government have picked up a habit or loans, which isn’t that good. Surely, some of them are the Chinese loans that could hit the economy. Also, other loans that is hurting the economy combined with the ways of the bulldozer.

The President has had his ways… He has attacked businesses, the mining industry and the agricultural sector too. Therefore, the financial market is getting hit too. This is because of the years with Magufuli who has had his way. Now the consequences of it is coming to the surface.

This is worrying as this is destroying the economy. Who knows who is eating, but someone is earning on this non-performing loans and the crashing financial markets. With that is the losing value of assets, lack of liquidity and bad loans. All of this can amount to rising inflation and later issues of lack of assets and liquidity to actually salvage the non-performing loans. That is like an evil bad circle of financial mismanagement.

I know that President Magufuli don’t want to hear that, he don’t even want to see the stats or get anything out that isn’t sanction by his men. He wants everybody to move after his words and orders. That will not create anything good. The President has to see this and find out ways to figure this out.

The Economy is clearly failing, the Financial Market is fragile and who knows what is up next. But there has to be significant changes to change the current state of affairs. What this is showing is the picture that the President and CCM doesn’t want to show. As this is the weakness of the government and the Financial Market at this point. It is not a good look. Peace.