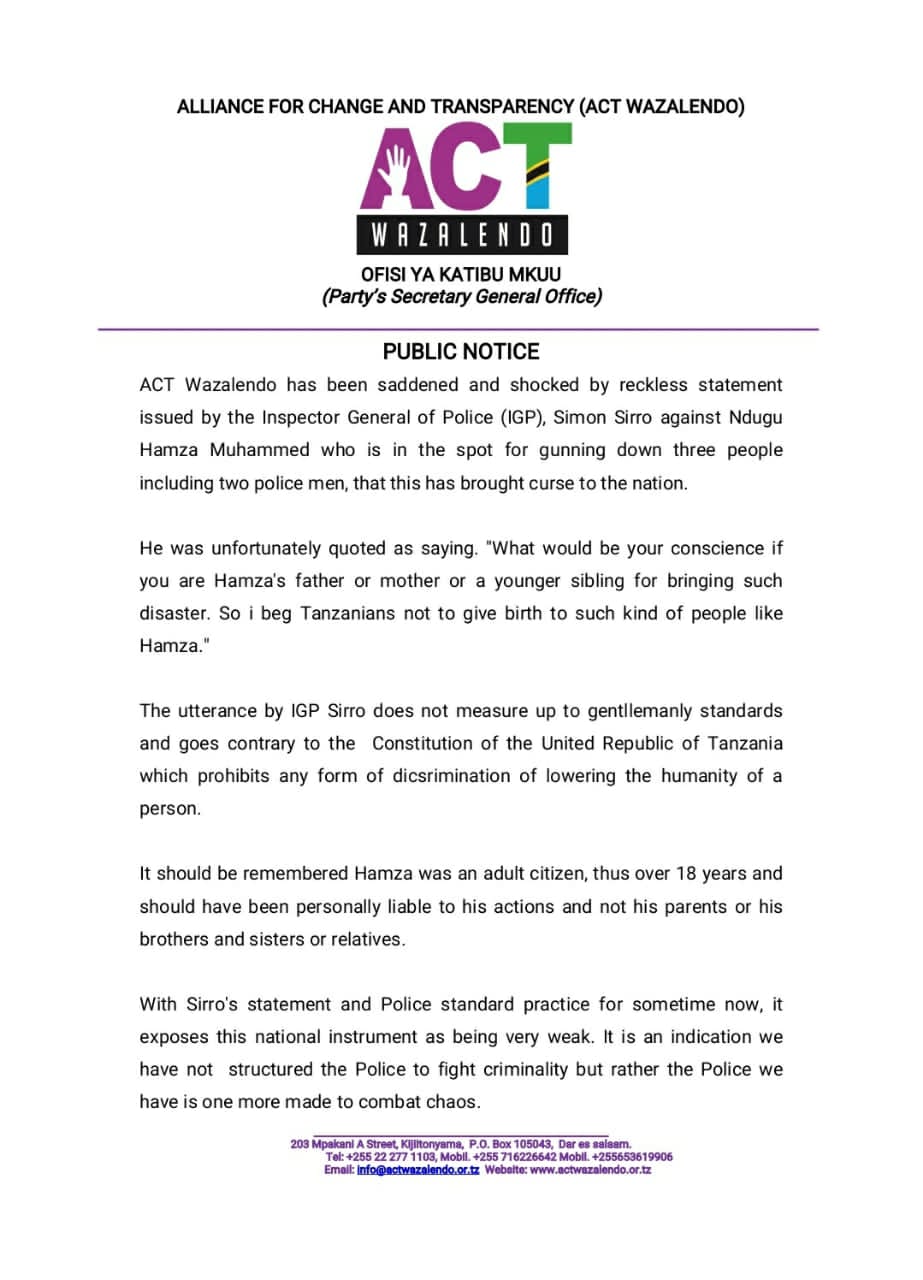 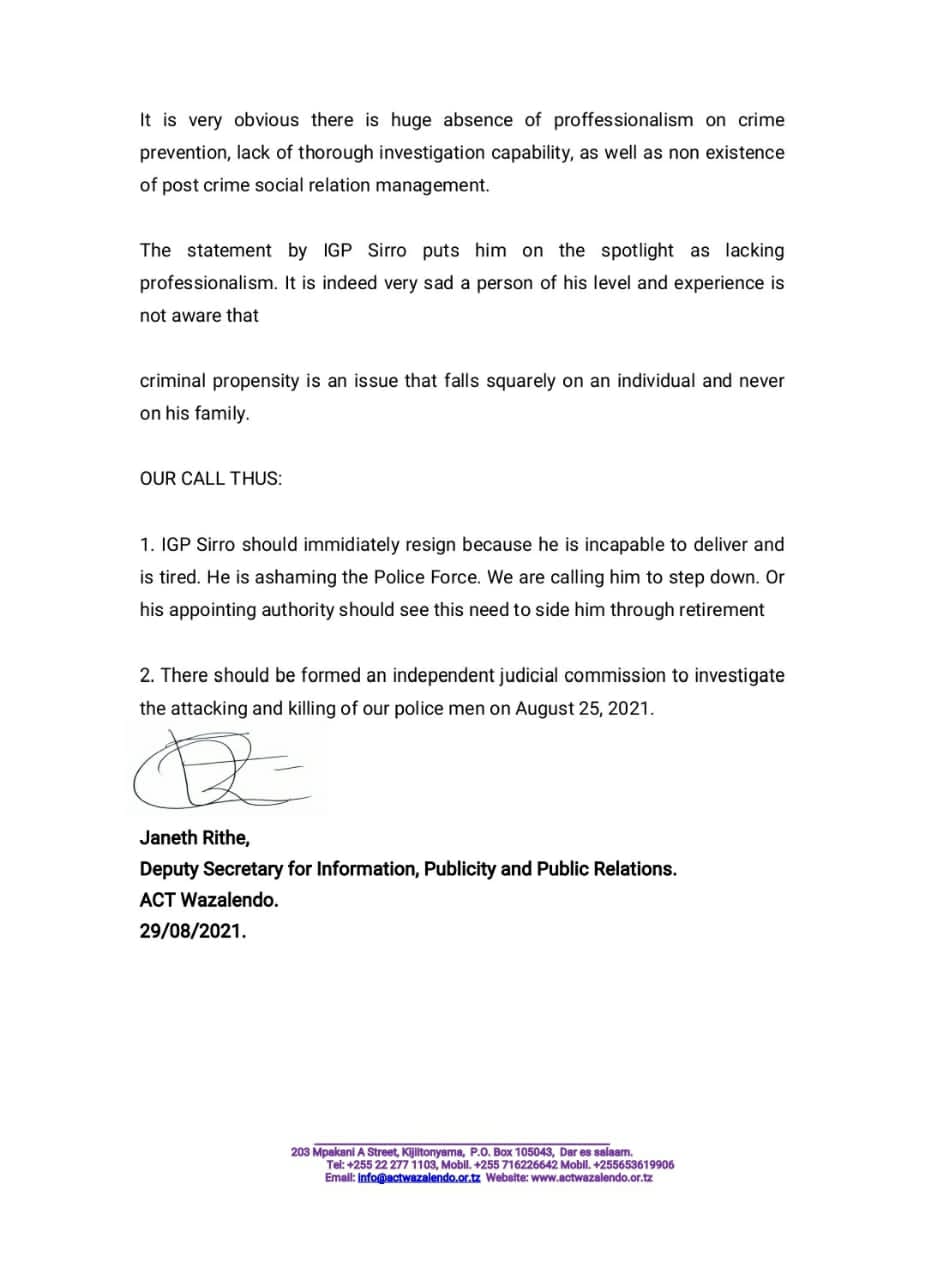 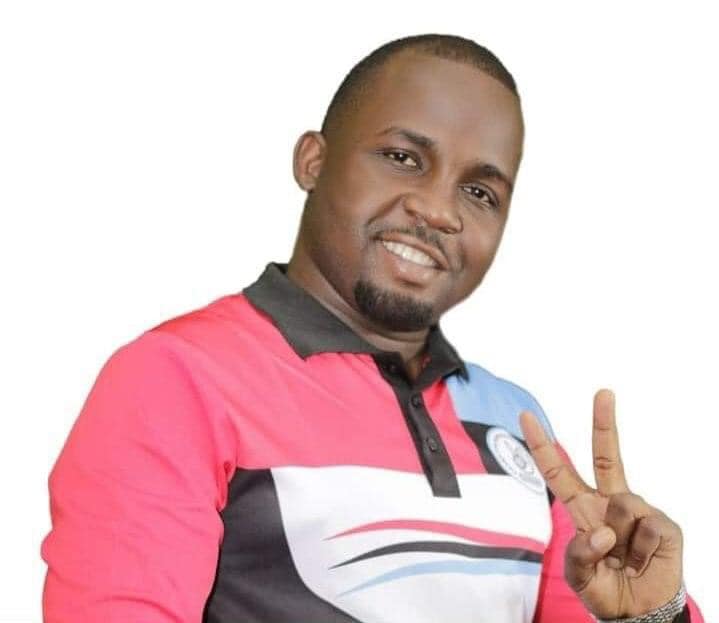 Today, it is reported that David Chiduo, Chama cha Demokrasia na Maendeleo (CHADEMA) Chairman for Kilosa district was arrested for encouraging and wanting to hold a prayer meeting for Hon. Freeman Mbowe. The Police said the opposition leader didn’t have the permit to hold the prayers.

That is the sort of measure and will the state has at this current moment. They are arresting people and dissidents for praying. Certainly, the devil is in them and it’s very ironic that this is happening.

As the previous President believed more in faith and prayer to combat the coronavirus. Therefore, it’s funny months after his demise. The same party and authorities are arresting people for praying and gathering to pray.

So, Chinduo got arrested for organizing a prayer meeting in solidarity and in concern for the Chairman of CHADEMA. Who is lingering in jail on terrorism charges. That says a lot about the state of affairs and what the state is willing to do.

I wonder, what sort of law is there to stop people from praying? What law will be used and what danger is he posing praying for someone? Are the authorities afraid that God actually will listen and release Mbowe? I just wonder and this is disgusting. It is not like he tried to seek out measures of riots and anarchy. No, he was trying to gather people to pray. So, will the same police and authorities arrest priests as well?

Chiduo shouldn’t be arrested for this. What crime did he commit? What sort of dogma did he breach? Was it blasphemy and insulting the state? We need some answers, because this is ridiculous. Peace.

The Chama Cha Mapundzi (CCM) is reigning supreme in the United Republic of Tanzania. Today it’s the first 100 days of the first woman as Head of State and Commander-in-Chief Sama Suluhu.

She came in with some positive changes, but her reign is continuing the same old fashion tyranny. She’s a female tyrant and that’s the only way to see it. As she orders the direct arrests of opposition leaders and get them charged for terrorism. He keeps the leadership of plenty of leaders of the biggest opposition party CHADEMA. The authorities are keeping them behind bars with no opportunity to get bail or has a change to defend for their freedom. No, they are charged and the authorities can keep them behind bars, because they are a danger to society.

That is why the authorities can torture them and violate the civilians who just happens to be dissidents. The tyrant of Tanzania in her short stint in office has already been able to arrest a bishop. She has already proven her ruthlessness.

As she has no sympathy or care for the Women’s Wing of Bawacha who are behind bars. They have been raped, tortured and the woman have been denied sanitary pads. The tyranny is so alive and well.

The President doesn’t care about the well being of her enemies. No, she will just charge, detain and use the system to go after them. They are terrorist, money-laundering and blowing up gas-stations. Clearly, the CHADEMA leadership should never consider or hold meetings to plan a constitutional change.

Because, a constitutional change and changing laws would give her less power. That is why she has to silence them. This is what she fears, as the predecessor gave her more power. The state and laws, which have ensnared the opposition parties and their movements. The opposition parties has to notify authorities to hold meetings, gatherings, demonstrations and even doing simple training of members. The media have been chocked, social media and bloggers has to get allowed to publish. If they go against the grain, expect the suspension or get charged like thieves as well.

That is what is happening to the CHADEMA. CCM have over the years made it hard to operate and they do it deliberately. That’s why the current can target and charge them. This is nothing new, but after 100 days in power.

All hail the tyrant, Samia Suluhu. She is the new face of Tanzania and everyone should know. That she has no heart for the opposition, dissidents or activists. They will all suffer under her rule. It is now proven and anyone should know this. Peace. 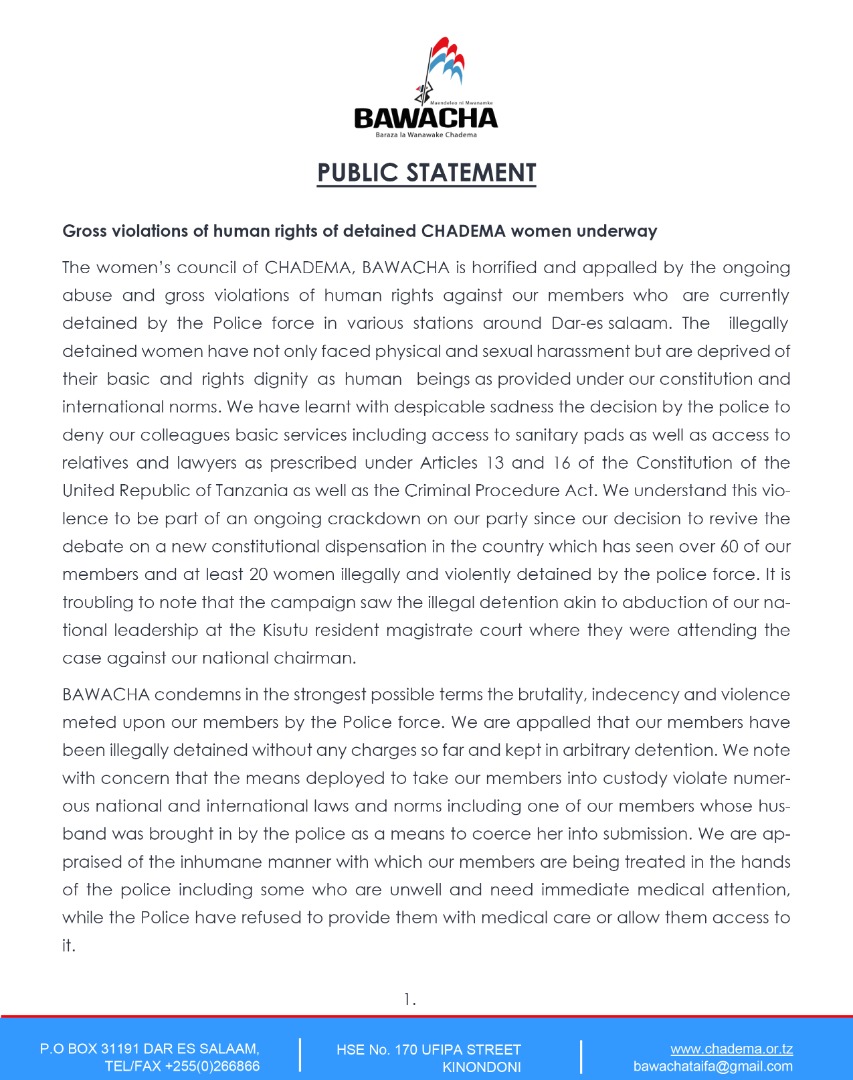 The crackdown on the opposition party Chama cha Demokrasia na Maendeleo (CHADEMA) continues in the United Republic of Tanzania. This is happening as several of central leadership is charged on terrorism charges and other criminal activity.

While the Bawacha was holding a meeting in Kagera region. As the meeting was held in their offices in Bukoba. The authorities stopped the meeting and brutally arrested their leaders.

The ones arrested are:

This isn’t shocking in the day and age of what’s happening in Tanzania. The Chama Cha Mapundzi (CCM) is using the authorities and silencing their dissidents with an iron-fist. There is no middle ground and an opposition party cannot even hold meetings within their own organization or inside their offices without being stopped and detained. That says it all about the current state of affairs in the Republic.

The CCM should do itself a favour and have a referendum on a “one-party” state. Since that what’s only left to do and officiate it. As the laws and the authorities rights to do this is insane. The rights of assembly and organizing opposition is getting close to zero. Therefore, do yourself a favour and become “one leader” and “one party” state. As that is what the CCM is practically aiming for at this point.

Because, this is injustice and impunity. They are criminalizing political work and it’s very clear from the outside looking in. Peace.

The Chama Cha Mapundzi (CCM) and the Government of United Republic of Tanzania are clearly targeting the opposition and the dissidents of the state. The authorities have now charged the leaders of Chama cha Demokrasia na Maendeleo (CHADEMA). These leaders who was charged yesterday are Hassan Bwire, Adam Hassan Kasekwa, Mohamed Abdillahi Lingwenya and Freeman Aikel Mbowe.

That shows the intention of the state. By charging this political party leaders with these charges it gives them a reason to hold them indefinitely. There is no reason to release them on bond or on bail. As the state can keep them as a “danger” to society. Just like the Tanzanian authorities has charged civil activists, journalists and others with money-laundering charges, which could keep the charges individuals indefinitely too.

That’s what is happening to the leaders of Chadema. The state can defer and keep them behind bars. They are not needing to produce them in court and such too. These are directly charged with acts of terrorism and thus indirectly being defined as “terrorists”. These are charges produced by the State Attorney and done deliberately.

It is tragic and terrible that the state does this. They are trying to make these people as example and use force to arrest them. This is making them political prisoners and they are there because of their association. Because, we know the CCM is allowed to reform and revise the Constitution. The CCM can easily change and review laws. While the CHADEMA leaders cannot hold meetings or symposiums doing the same.

That’s why we know the deal here. They are not terrorists, but this is signalling how the Republic is a one-party state of the CCM. As everyone else is supposed to follow the line and not do things, which isn’t accepted by the CCM. That’s why these CHADEMA leaders are behind bars and nothing else.

That is a tyranny and President Samia Suluhu is the newly minted tyrant of the Republic. Peace.

“The saga involving the Chadema national chairman, Mr Freeman Mbowe, took a new turn yesterday when the police said it was holding the opposition leader for questioning over allegations of terrorism and a plot to kill government leaders. The police said in its statement yesterday that Mr Mbowe was being held in connection with the allegations that were also made against six other people who have already been arraigned in court in court” (Evarist – ‘Chairman Freeman Mbowe Held On Terrorism, Assassination Consipracies’ 23.07.2021, Kimataifa.com).

The authorities and the Chama Cha Mapundzi (CCM) leadership is clearly out of bound and not checked in with reality. As they have through the politicised courts charged CHADEMA Chairman Freeman Mbowe for terrorism. That happened after his arrest on the 21st July 2021.

He was charged with terrorism. His lawyers haven’t been able to see and neither has anyone in his family. They wanted to see him at the Police Station and deliver food to him. However, that has been reported as impossible by the Serengeti Post yesterday.

Today, there is reports that his abducted to an unknown location and nobody knows where he is. The Police and the Authorities has dispatched to an unknown cell or dungeon. Just like they have done to government critics, journalists and civic activists in the past.

Mbowe only wanted a revision and question the current day Constitution. That is not a danger to society and neither the supposed mission to change the laws. The laws that is now used against him. The same laws the CCM has countless of times changed to help their stranglehold on the state and utter total control of opposition. Which is why these actions are legal to do, but that doesn’t justify it…

This is a clear indication of the a tyranny under CCM. That they can use these sort of allegations without any evidence. Just like the money-laundering charges on dissidents and journalists in the past. They are using same means now at Mbowe. It is tragic… but the CCM isn’t stopping itself.

This is a game of intimidation and silencing the opposition. Taking a leader of the opposition and making an example of him. There is nothing else to it. The CCM cannot handle the opposition and its easier to make them criminal, than actually having someone questioning their reign. Peace.

The new President Samia Suluhu and the ruling regime under Chama Cha Mapundzi (CCM) is continuing using the authorities against the opposition parties and their leaders. This is just days after the report of 300 Bavisha (CHADEMA Youth Council) members was arrested with their interim leader at a hotel. They were planning to hold a political symposium and that was clearly a crime in the United Republic.

Today, the authorities are going for the main party leadership of CHADEMA. Again is Freeman Mbowe and 10 other leaders arrested for having a Political Forum on Constitutional Changes . This is also clearly a crime and punishable by the state.

So, now the BAVISHA and CHADEMA has been directed targeted…. This is not shocking, but a continued spiral of the one-party state and its moves to crackdown on the opposition. The laws under former President Magufuli made it even worse for anyone to organize, run a party or have the ability to politically operate as an opposition. That space and those laws has been helpful for the current President.

She is using the same means and there is no end. The CCM wants to be known for arresting and silencing its detractors. The dissidents and the ones who dares to question the regime is quickly in trouble. If it is free and fair reporting, trolling online or just political activism. All of that can easily send you too the slammer.

Now, the CHADEMA and BAVISHA been directly targeted and gotten huge arrests. Which just shows that the CCM is the CCM, no matter who is the Head of State. Peace.