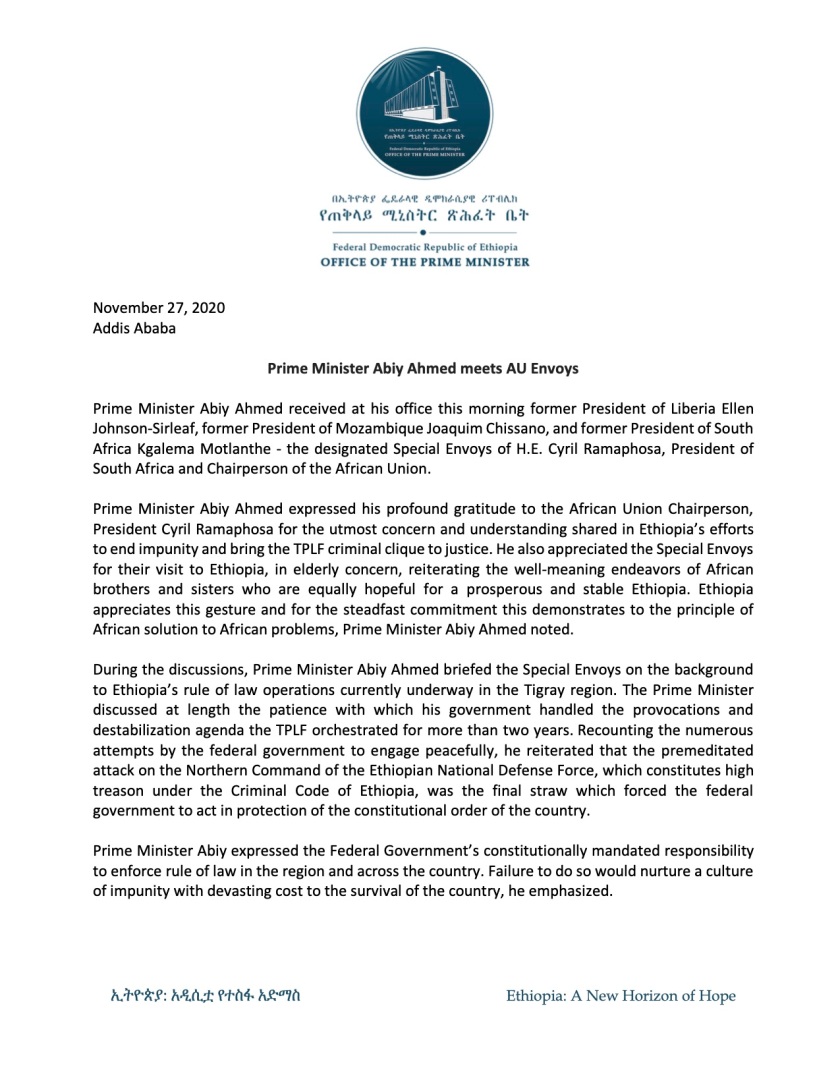 Let’s say the World Bank, International Monetary Funds, USAID, EU and everyone else giving direct donor support of the PP and Prime Minister Ahmed Ali Abiy government. These people should suspend their direct government budget support, as these monies are funnelling civil-war and warfare in the Tigray Region. While the same support is used to take political prisoners and create a media black-out in the Republic. Where only the voices of the Addis Ababa elites and the ones loyal enough to the PM can report. Therefore, God knows what is really happening.

If the PM wants to be sovereign. He should be sovereign on his own dime and the direct revenue of the Federal Republic. The IMF and World Bank, the Foreign donors and others should give him funds to cover the fiscal discrepancies he might have. Since, he clearly has money for war and fighting his own battles. Which he don’t want to say call it that, but calling it “Law Enforcement Operation” which has been going on since 3rd November 2020.

A man who wanted to be known for peace. A man who could easily mediate in foreign lands himself. However, he doesn’t want to have direct mediation in his own conflicts. Only his stories are to be sold. Everything else is to be shelved. If you speak up against him. You are speaking against the Republic. Even if you fear for the lives of civilians, refugees and the ones fleeing conflict. A war between brothers who turned guns against each other.

The Prime Minister are you hiding anything? Since you don’t want the International Community to look into your actions? Are you afraid of what their “fresh” eyes or what they might hear? Are you afraid of the outcry and the pain you have caused on civilians? Do you fear the witness reports from fleeing citizens in Sudan?

Eventually, the stories will not be in your favour. Even if you block everything and only blast your news. The Tigray People’s Liberation Front (TPLF) wants their stories out to be in a good light. As they also will act with vengeance and retaliate. The TPLF will either be defensive or find an angle that make you look evil. That is all natural, just like your colouring them as treasonous people and terrorists after working with them for years in the EPRDF. This is why, I am sure and I know the TPLF have done evil in government. However, you have the army now and can cause lot of more suffering then they can at the very moment. You have the government, the army and the legitimacy as PM to cause much more harm than they can. They can finally and in the end… only create a guerrilla war, which you started on the 3rd November and will haunt you as long as you rule.

So, with all of this in mind. What are you hiding? What are you afraid of leaking or questions you cannot stomach? For a man who is bold enough to order people’s death and bombing towns with ease. How come you cannot answer questions of your donors and the ones keeping your government afloat financially?

Maybe, Mr. Prime Minister, you shouldn’t have accepted their money and their funds. If you didn’t want them to bother you. If you wanted to be totally sovereign. Your government shouldn’t have taken direct budget support. The International Community should with this message. Suspend the Direct Government Support and Budget Support. They should instead spend that on UN Organizations helping the IDPs and refugees in Sudan. They should instead help the ones who fighting for the justice, liberty and freedom within the Republic. The IC should support CSOs and NGOs who are working to help Oromos in need and Tigrayans in need now. Also, all the other places where the government use law enforcement to stifle dissent. Since, the government doesn’t want interference. Let’s support the local CSOs and NGOs who actually help the public. Not to fund a war, but fund the people in need.

Prime Minister Abiy, as long as you accept others people’s money to bankroll your government. You should expect that they will look under your skirt and question your actions. The moment you stop eating it and enjoying the perks of other people’s money. You might feel even more sovereign. Just think about that.

As long as you have military operations against your own. People will question you and your actions. Wonder how much pain, suffering and if you are violating the Geneva Convention or crimes against humanity. At this very moment we cannot know, as you are shielding the information and the flow of reports. However, with time the truth the will come out. While you are really showing your true nature to the whole wide world.

Your not a man of peace, but another War-Lord who wants to be unaccountable and only wants fanfare. Peace. 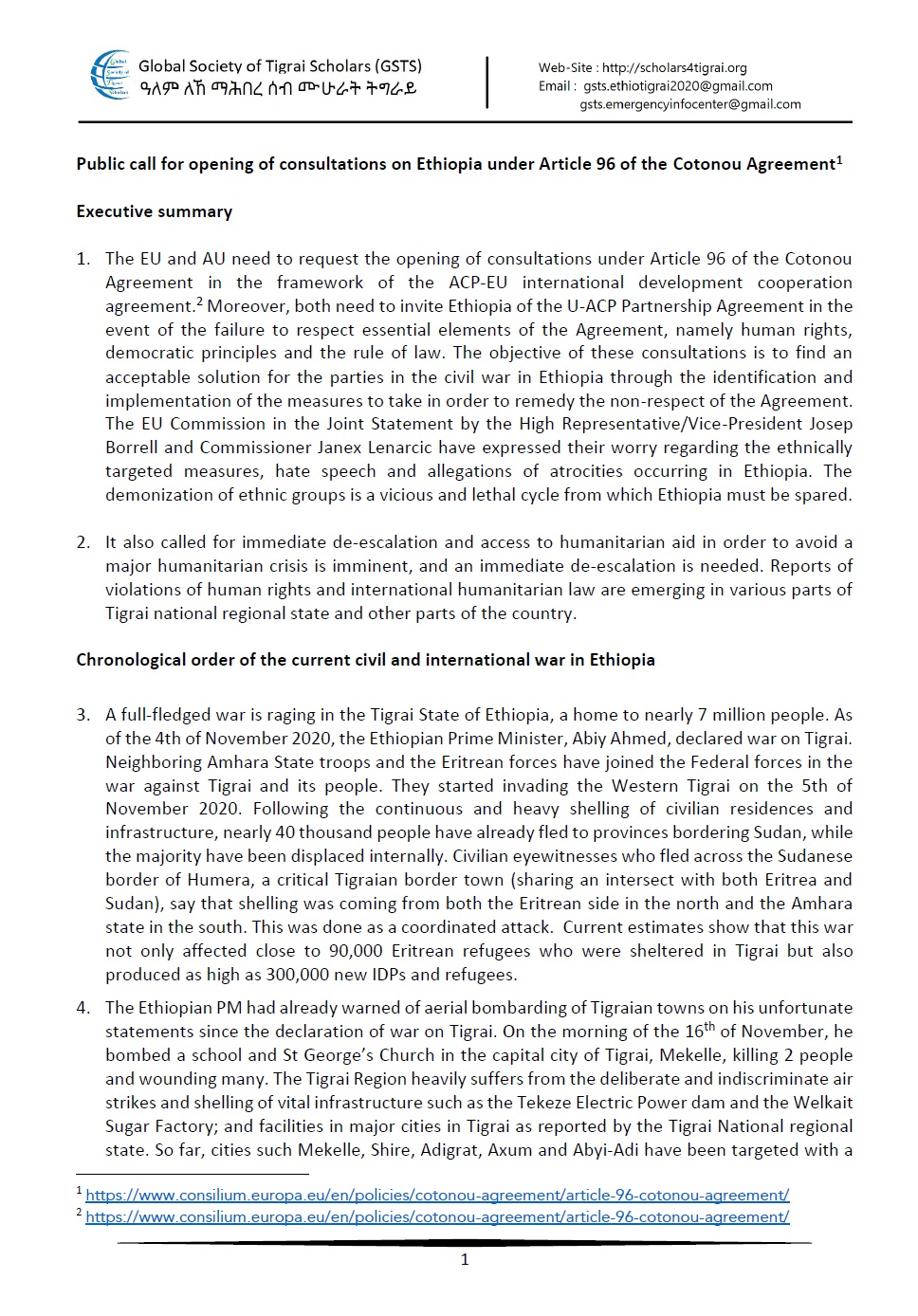 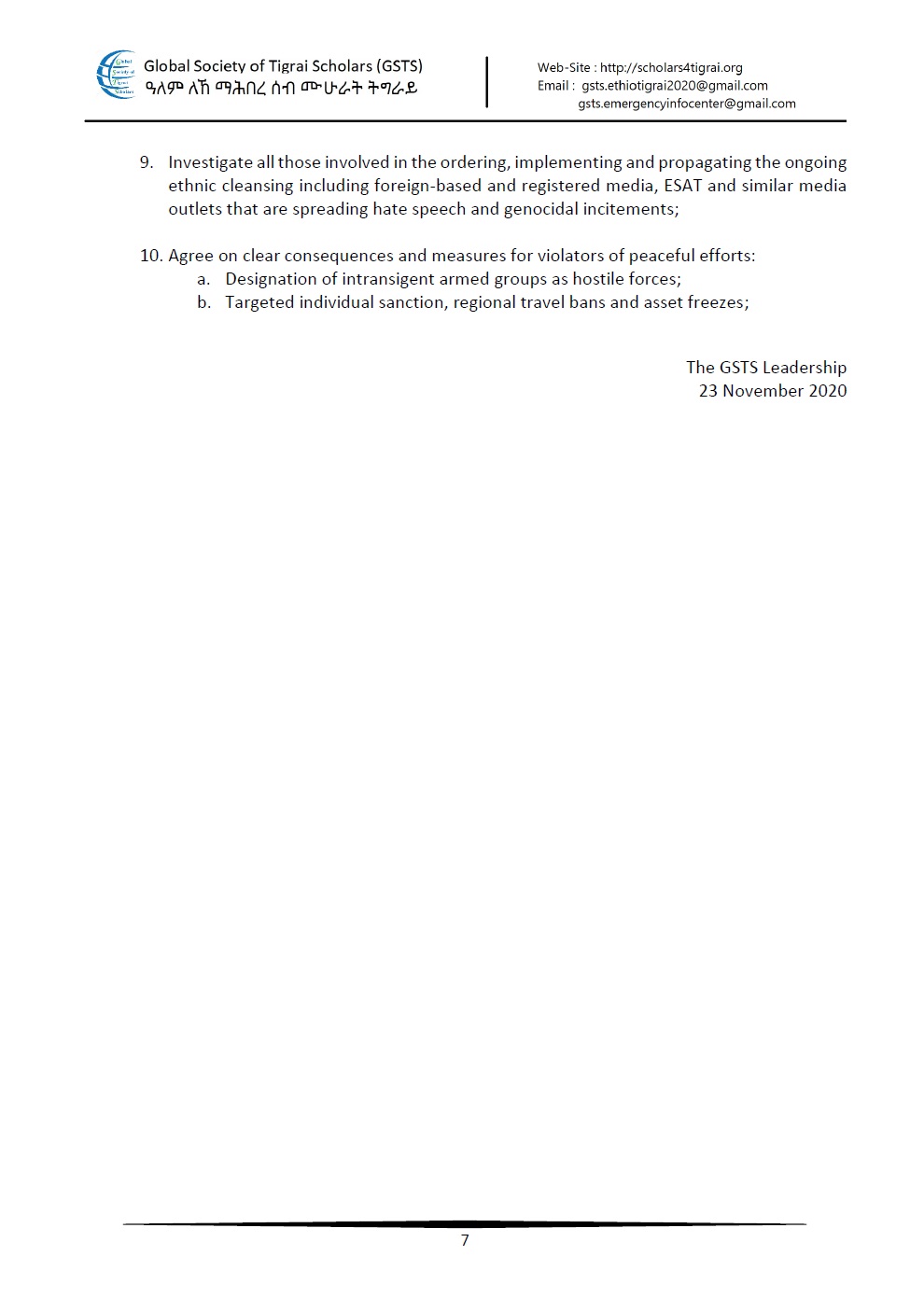