but as we’ve seen at Westminster, the herd is powerful and when the herd moves, it moves and

and my friends in politics no one is remotely indispensable” – Prime Minister Boris Johnson (07.07.2022)

The resignations has been looming and glooming all over the British isles, heck whole of Europe has been keeping an extra lookout for the cook-out in London. Because, the tide is turning and the lack of trust in the Prime Minister Boris Johnson is sincere now. The Conservative Party and the ones in government has mostly dismissed him. They wanted him gone and by yesterday.

Yes, he had his farewell of address of sorts today. Even if it was a nonsensical event. As he wants to fill in the void until the new Tories chairman is elected. When that happens he will finally step down. Even with the around 60 resignations over the last three days or so. It was hard to follow the count and the score-card, because it was a circus.

Even with that in mind and with a care-taker PM in Boris. Someone is still viable and foolishly enough to accept the price of a ministry and a title. Yes, just as some resigned after two days in office. Another jumped in… no joke some blokes and MPs are willing to sacrifice their political capital and future. Just so they have a ministerial post on their CV.

Michelle Donelan MP didn’t even get to do anything in her office. She was barely there for 48 hours and couldn’t even get the access codes to her office or the ministry, which she was supposed to reside. So, it is interesting that James Cleverly MP is the third secretary of education within the same amount of days. I don’t know why his even seeking this office. Not like this will be a long term one or a fruitful one.

You cannot say that Greg Clark MP who is taking over for the sacked Michael Gove MP is having a magnificent future either. I don’t understand why Sir Robert Buckland QC MP wanted to become Secretary for Wales now, but he apparently did. We can really wonder what is worthy of being the Chancellor of the Duchy of the Lancaster, which is the office accepted by Kit Malthouse MP. The final official appointment today was to Shailesh Vara MP who was appointed to Secretary of State for Northern Ireland.

These 5 MPs are really a special breed. When everyone else has left the sinking ship. These five gentlemen thinks this will run smoothly. They should have seen the writing on the wall. They are enablers and giving way to the PM. A PM who defiantly is staying behind. While everyone wants him going. These MPs are ensuring the stability and the running of government. Just so the PM gets a softer landing…

That is really it and you can wonder why they want to do that. They know how reckless and ruthless the PM has been. The way he used his means to demote David Cameron and Theresa May. Not like he didn’t play a role and his resignation didn’t unleash trouble too. That’s why the PM knows this game perfectly well, but the same means which brought him powers. Are the same one that is ending his too.

It is just striking that MPs are still signing up and willing to serve under the PM. They should have just stayed home and chilled. These MPs should await the Tories conference and the end of Boris Johnson. Then they could await plum-jobs and titles in the next government. Now, they are just eating and playing around.

Being enablers and giving Boris Johnson some peace, which isn’t deserved. He should have stress, worry and concern. However, we know he prefers to party and dodge all responsibility. Peace. 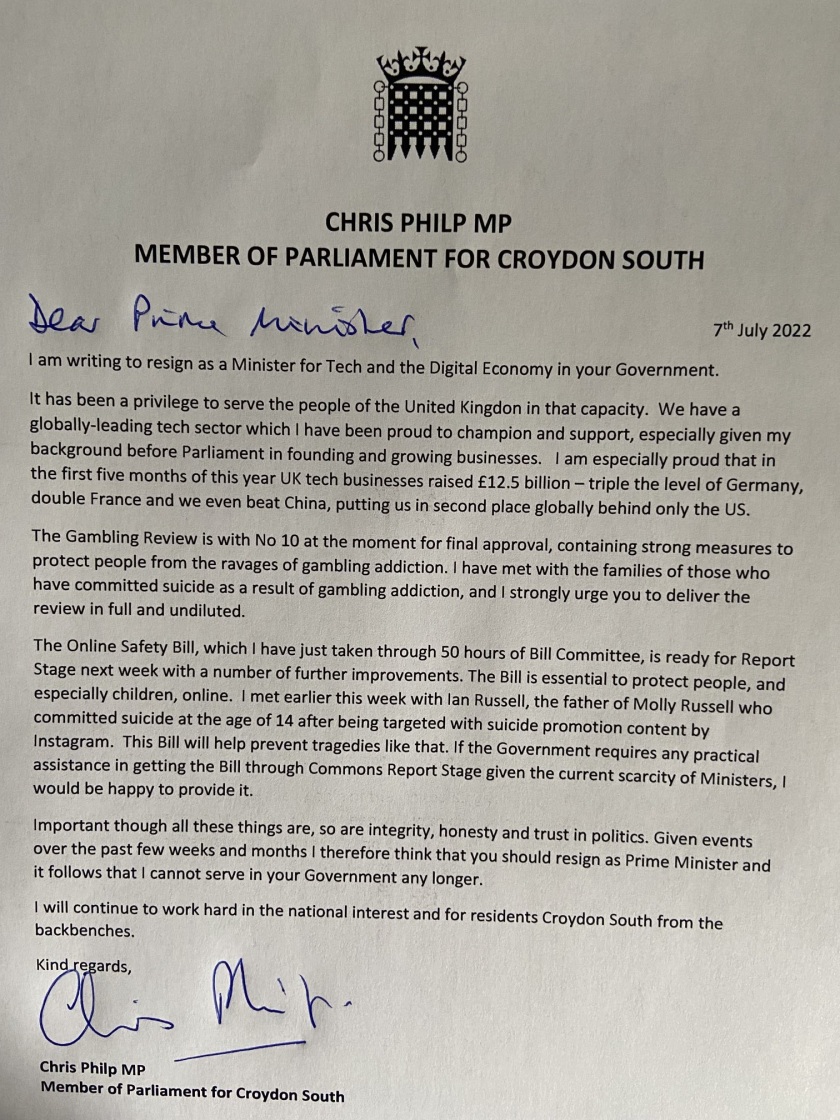