One thing is for certain. If you elect gangsters, they will make their office into racket. It is just a matter of time. Their leadership, their model and their ways will exposes by a crisis like COVID-19. The Coronavirus will show the weakness and expose the realities.

The Administration, the government will show its true face. If it is sincere, if they have policies or even if they damn care about you, the citizens. However, if you elected a gangster or accepted that they rigged themselves into office. Than, expect the worse.

Because, normally, they will issue some tenders and take some kickbacks, juice up the prices, make fake shell-companies and secure the patronage money from the state coffers. Usually, that hurts the institutions, the government and the budgets. But it doesn’t change much on the ground. As some of the services, some of the procurements are good, but that are drip drops on a faulty system anyway. There are some roads built, some maintained, but a lot to give. That is why development projects, infrastructure projects sky-rocket in price and costs, also prolonged by the gangsters who need their cut.

However, in a COVID-19 crisis, a pandemic this doesn’t work. Their years of neglect and phony contracts cannot sustain the damage, the hurt and the pain. It is occurrent and they cannot forge the paperwork. They rewrite deaths and positive tests of people, but somewhere along the line, there will be mysterious deaths. Secondly, the Hospitals, the ICU beds and ventilators cannot be faked.

Their racket, the racketeering cannot save you. Not that they sheltered the public. Not like the previous rackets or tricks of trade made a big change, but it was a make belief and rouse. It tricked the paper-tigers and surely sold a lot donors. However, the dire poverty is still as rampant. The lack of social security net and welfare state is evident. The heads of state who used their position as a racket is exposed. Their years of neglect and lack of care is now official news.

These folks, these gangster will not save you now. They will only postpone and try to salvage their hurt. They want to secure their vaults and their wealth. If they do things, its only to secure their empires and their vast resources. They will dispose those on the public, neither will they dole the public with massive gifts nor invests properly in the failing Ministry of Health. No, they will await the donors, the Multi-National Organizations, United Nations and whoever who is seeing the tragedy and hope their dime can change the equation. Even if they have dollars upon dollars stored away in unnamed bank-account in Switzerland. Because, that is what they do.

Don’t expect Gangster to save you. They are in it for the nickels and dime. By the hook or by the crook. Anything can become a racket, they just need to find the loophole and the ability to trick the situation. Don’t expect them to save you and yours. They will only patch the hurt if it benefit them in the long-run and you will repay their loyalty. If not, you will be forgotten or not mentioned. You toils, you pain, your suffering doesn’t count, because there is nothing you can repay the favour with.

That is how this is. The game is rigged, you were not expected to play, but you will still loose. It’s just like Casinos. The House cannot loose. The Gangster cannot loose either. The mobster will win. It is just a matter of time. The public will cry, the pain will be real and the death will be on the street. Don’t expect the gangster to mourn, except when the men of honour dies. Than, he will salute and shed a tear for the public. That is only a facade, as long as he reigns supreme. Peace. 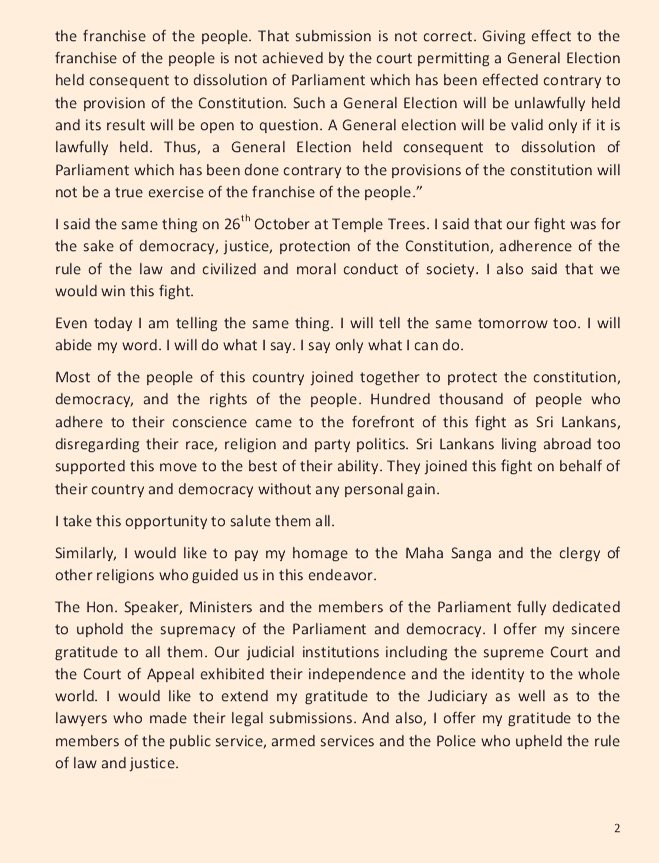 Since 26th October 2018, the President Maithripala Sirisena appointed a second or a new Prime Minster Mahinda Rajapaksa, this was done in violation of the Constitution and the 19th Amendment. Therefore, the last few days has shown the strength of not only the Parliament, but the independence between the Executive and the Judiciary.

Since all of that happen, the last 48 hours been vital in reaction to all the hasty actions of the President, that is clearly done without luck or acting clever. As the laws and the MPs have been loyal to principal.

“COLOMBO, Dec. 12 (Xinhua) — Sri Lanka’s Parliament on Wednesday passed a vote of confidence on ousted Prime Minister Ranil Wickremesinghe with 117 lawmakers from the 225-member Parliament voting in favor” (…) “Following the vote, Wickremesinghe thanked all the parliamentarians who voted for him and promised to protect democracy in the island country” (Xinhua – ‘Sri Lanka Parliament passes vote of confidence on ousted PM’ 12.12.2018).

Supreme Court orders against the Presidents Order to dissolve the Parliament:

“The Sri Lankan Supreme Court on Thursday ruled that President Maithripala Sirisena’s decision to dissolve the Parliament 20 months before the end of its term was “unconstitutional”. A seven-member apex court bench said that the President cannot dissolve Parliament until it completes a four-and-a-half year term, the Colombo Gazette reported” (The Indian Express – ‘Sri Lankan Parliament dissolution ‘unconstitutional’, rules Supreme Court’ 13.12.2018).

The President acted for some reasons to forge an alliance… where he did the act of making double trouble. Two Prime Ministers without doing it through the proper protocol. That the Parliament have confidence in Wickremesinghe as the PM. While the Supreme Court answered to the illegal dissolving of the Parliament, therefore 48 hours of losses for the President.

The President has lost it in the gamble for appointing Rajapaksa as the PM.

This is for the best of Sri Lanka. Not one individual for selfish reasons tested the whole system and failed. The President has to reinstate Wickremsinghe, because Rajapaksa is unconstitutional, just like his decision to dissolve the Parliament. It is time for the President to swallow his pride and follow the protocol, as it has presented to him. Peace. 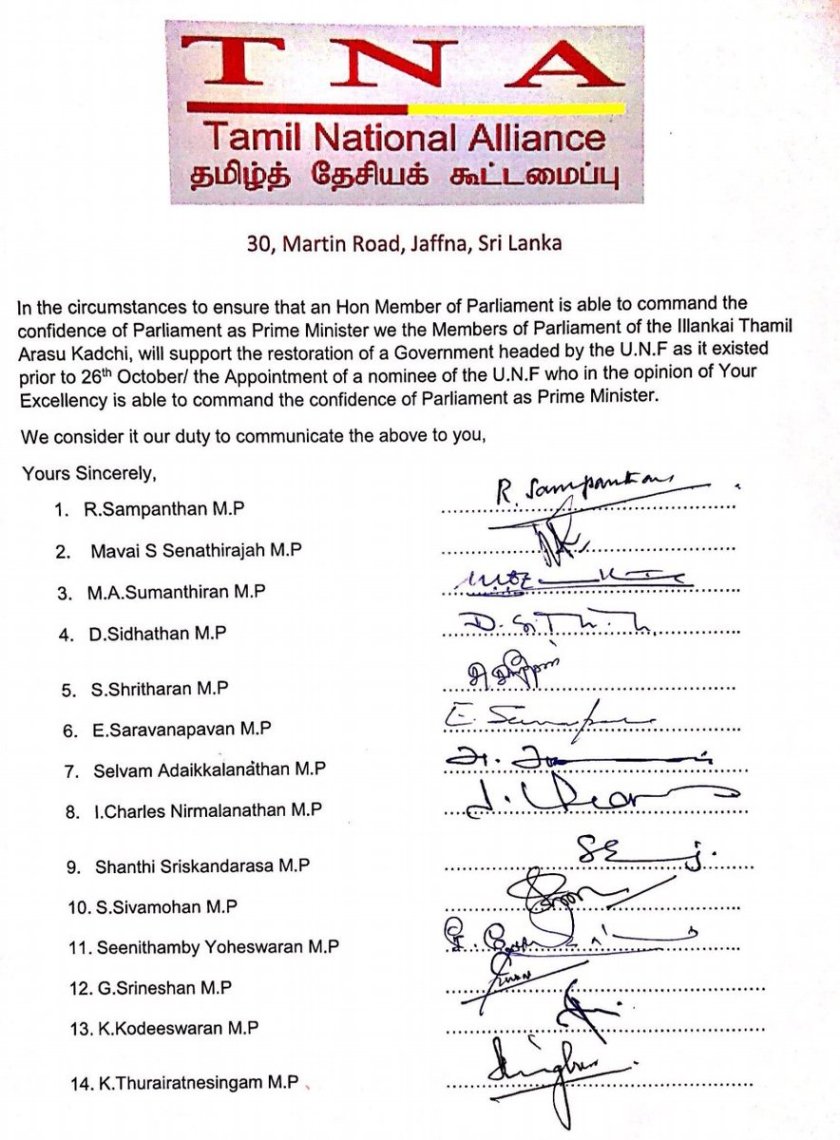 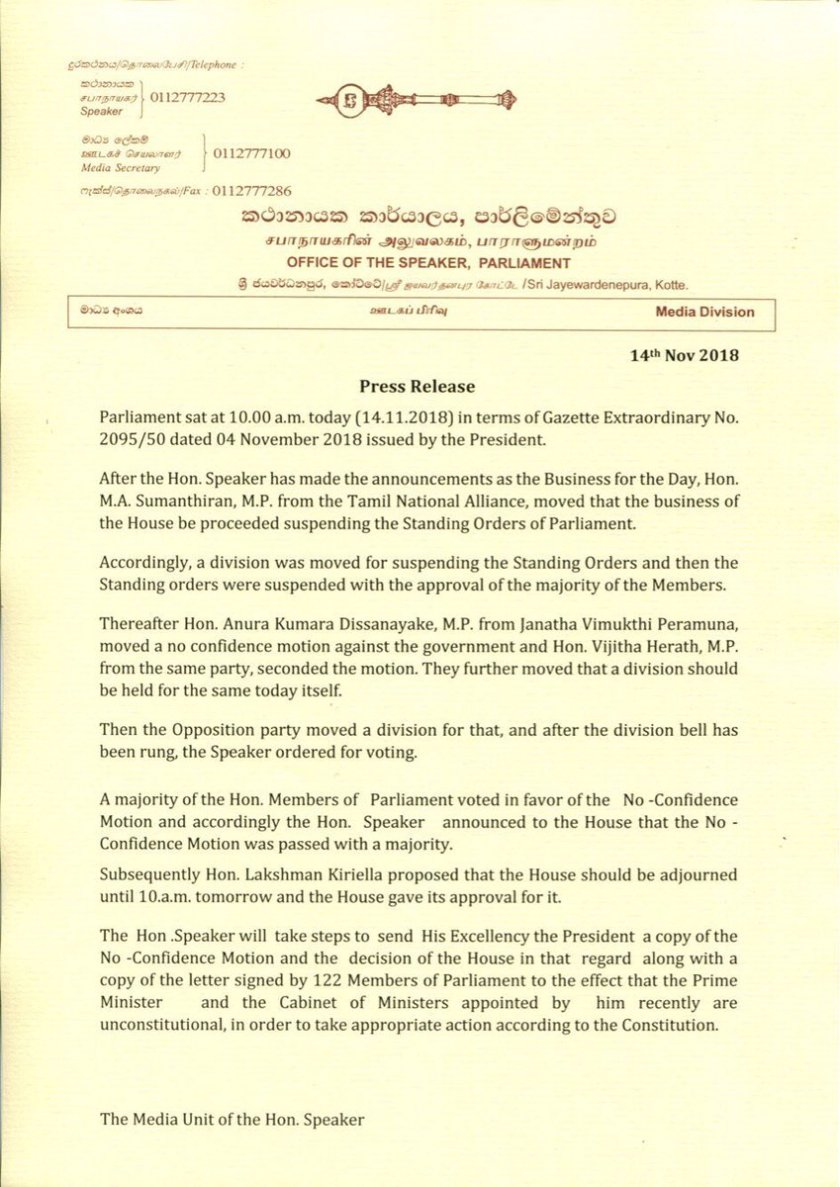 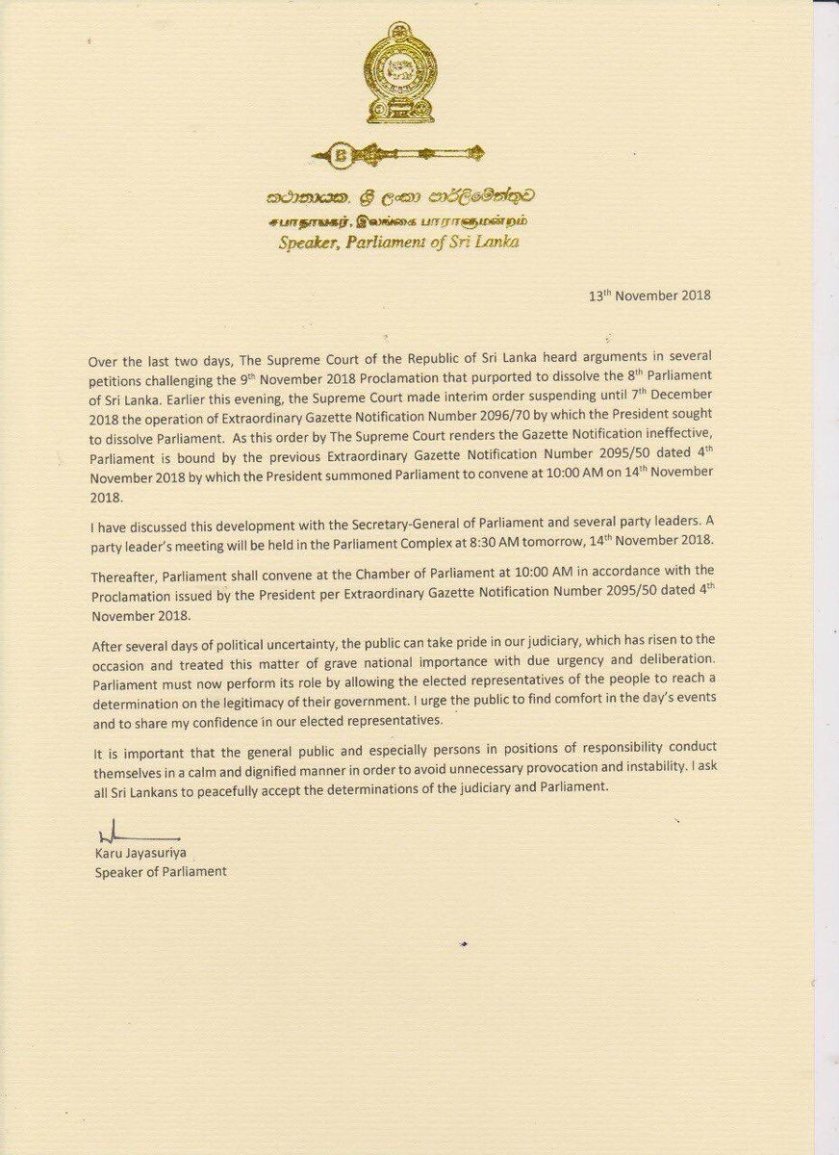 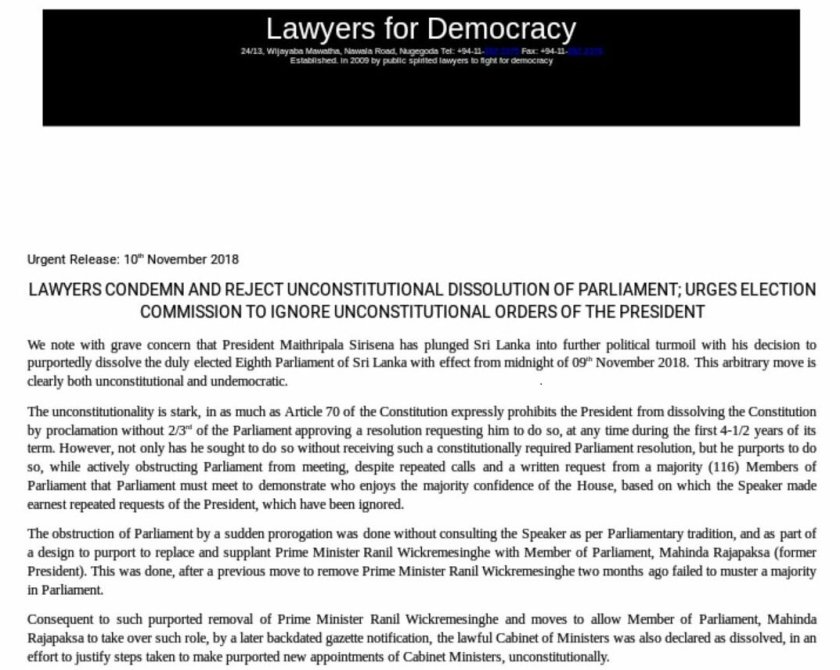 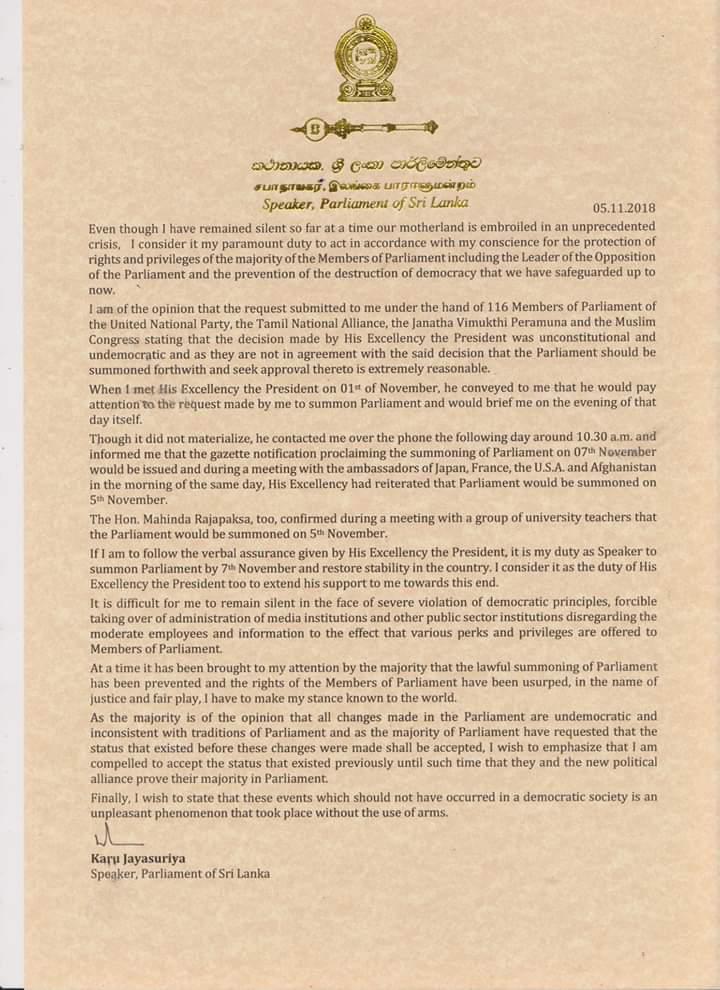