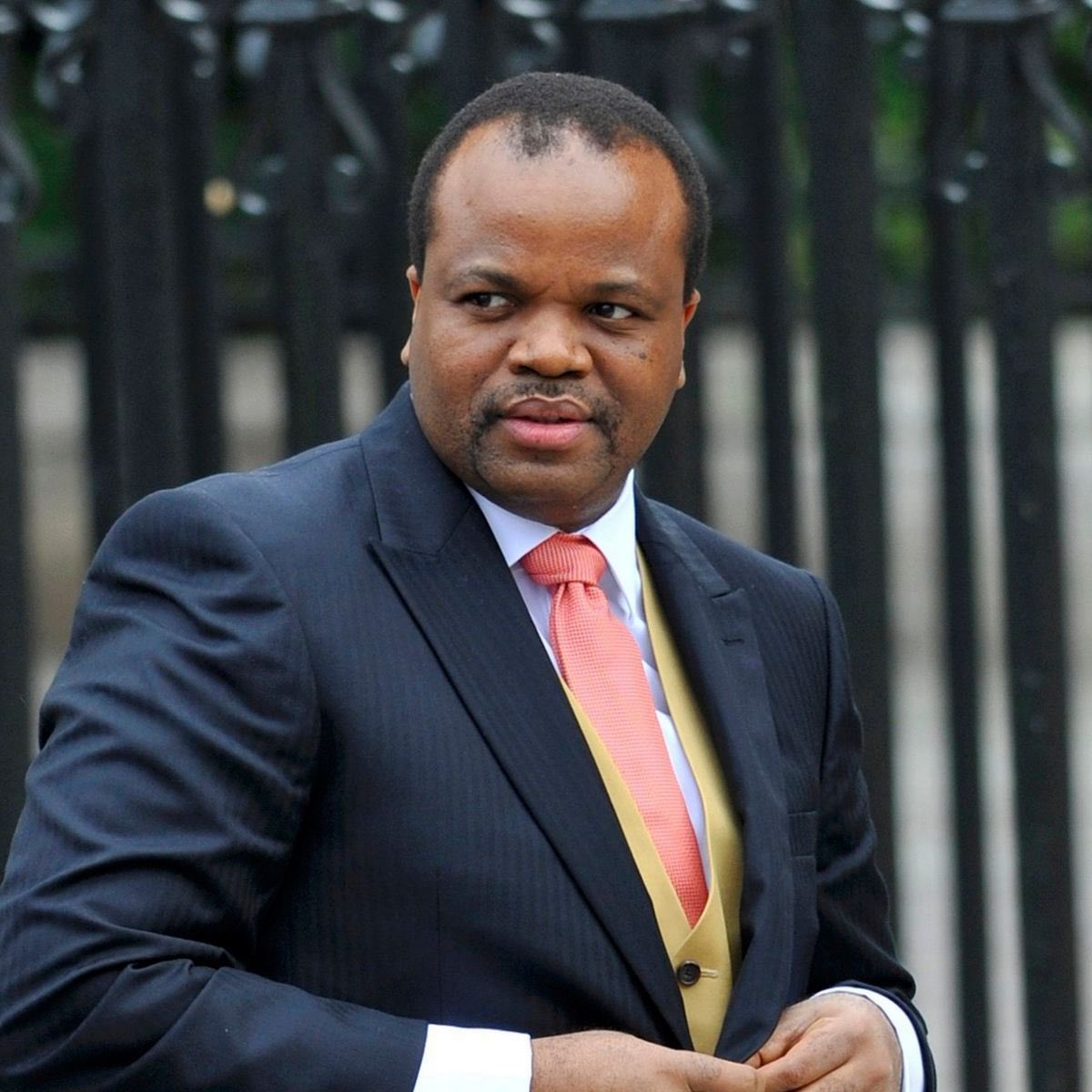 The absolute monarch of Eswatini, King Mswati III ordered amidst demonstrations and pro-democracy rallies. The state cracked down on the political parties and civilians who wants representation. In middle of all that as the soldiers was on the streets and the authorities was going from door-to-door. They were arresting and detaining the leaders of pro-democracy activists and leaders of the political parties.

At that time… the King had the time to think of this:

“LOBAMBA: Five(5) people were brutally shot and killed at Lobamba Mashibhini by King Mswati’s security forces for alleged ritual purposes in the midst of the political crisis. This is contained in an electronic evidence sourced from the Ludzidzini Royal Palace that further exposes details of other highly sensitive killings that were planned against leaders of the pro-democracy movement including Siphofaneni MP Mduduzi ‘Magawugawu’ Simelane. An independent investigation by this Swaziland News uncovered that on 03 July 2021 at around 1815hours, about eight(8) soldiers and six(6) police officers from Lobamba Police Station were deployed at Mashibhini to brutally kill the citizens as part of a ritual operation to urgently collect human blood that was to be mixed with muti known as ‘Mahlabasihlangane’” (Zweli Martin Dlamini – ‘REVEALED: How King Mswati ordered security officers to shoot five people at Lobamba Mashibhini for ritual purposes’ 03.08.2021, Swaziland News).

This just proves everything wrong when a King can extra judicial kill his own citizens for a ritual. That one man can decide life or death. The King in his authority just settled their lives and decided that these citizens was useful for a ritual. The King needed their blood to do a ritual.

This is really sick of a man. The man selfishly killed people to do a ritual. That shouldn’t happen anywhere. This is ice-cold murder. The plot is revealed and the man behind the scheme is in fine print. His walking away from without any sort of trial or judgement against him. Since his the absolute monarch. That’s his get-out-of-jail-free-card, which is astonishing.

This is demi-god like. That a man can do this and order these sorts of schemes. This shouldn’t be allowed anywhere. These civilians didn’t ask to partake or not. I understand why he did at the public gathering and the “dialogue” said all the citizens was his. Because he clearly believes so and he believes he has the right to chose between life and death. That is the sort of King he is.

King Mswati III shows his despotic tendencies and his irrational leadership. As he can easily use force, kill and destroy his enemies. Heck, he can just kill someone for any given reason. That is the sort of Head of State he is. That is a tyrant and nothing else. Peace. 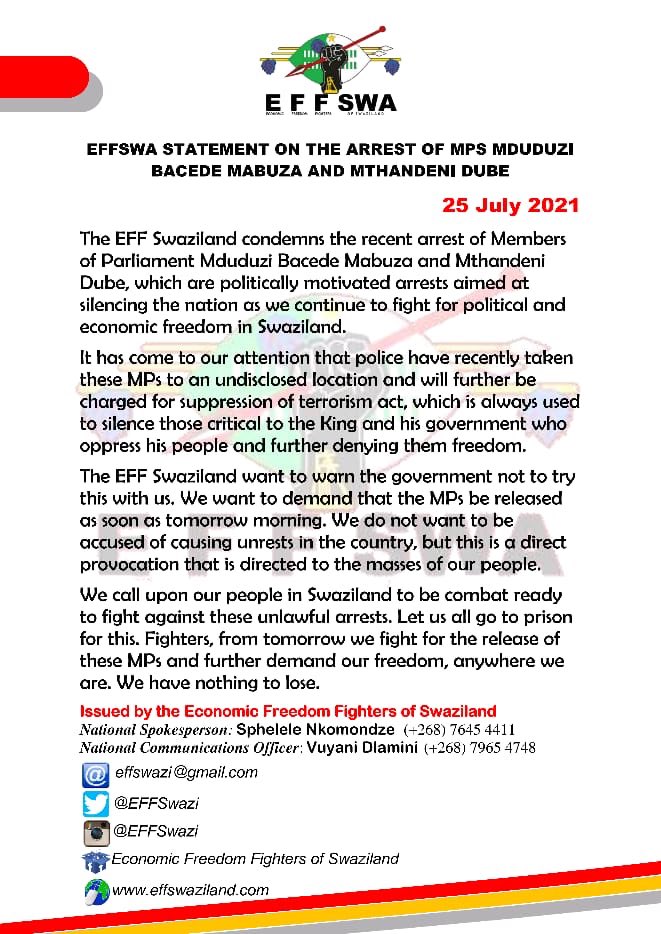 “MANZINI: Hosea Member of Parliament(MP) Mduduzi Bacede Mabuza who is critical of King Mswati’s Government has been arrested and charged with terrorism among other charges. Mabuza was arrested by the police at his home at Ngwane Park in Manzini around 1500hours on Sunday, he is also accused of violating COVID-19 regulations. Reached for comments, the Hosea MP confirmed the arrest saying police were surrounding his home at the time of compiling this report. “It’s true, they are here arresting me as we speak, they told me I’m facing terrorism charges”, said the Hosea MP” (Swaziland News, 25.07.2021).

The stalemate between the king and his citizens doesn’t stop. As funerals are becoming political rallies and the state is cracking down on its dissidents. One Member of Parliament Mabuza is now charged, arrested and facing long jail time.

The Kingdom is using its authority to settle the score and the MP is one of voices it needs to silence. This is not shocking, as the state has gone after activists, leaders and arrest of political leadership in the Kingdom. The recent act is just furthering the agenda of the King. Who wants to quell and silence the idea of a multi-party democracy.

The King rather wants to go after the ones who fights for these ideas. Because, he wants to shield his absolute power. They are making the MP a public face of this. Just like they have done with other parties and their leaders as well.

The King should see what sort of light he puts himself in. Instead of being loved and cherished as a king, he is seen and acting as a bloodthirsty tyrant. His greed and his stubborn behaviour will only make this more painful.

The will of the people will sooner or later hit strides. It is not like he owns the people, even if he believes so in his mind. Just because the current laws gives him this opportunity and power. Doesn’t mean it is righteous either. It just shows his lack of morals and judgement. As he rather use force and destroy, instead of building and creating a better future. Where he could be remembered to open up the political landscape and get representatives leaders. Not just people he vouches for or appoints, which is the current day system.

The reason why this MP is critical of the King and others are as well. To arrest and charge him on terrorism is actually projection on their part. As the king has terrorised and done atrocities in his kingdom of late. The king have ordered people’s death and he has raided people’s homes. He has assaulted hospitals and that’s what terror does. Not standing up to one man and wanting to have elections, representatives of the people and let them chose their leaders.

That is why these recent arrest and charges is a proof of his tyranny and remember to salute the Tyrant Mswati III. Peace.

King Mswatini III held today an extraordinary Sibaya, which went as anticipated. The protests and demonstrations for a multi-party democracy continues. This was brutally silenced with bullets and state sponsored violence.

The king continues his path of not listening. He rather be the absolute monarch and respond to no one. That is shown by his words of disrespect to the ones fighting for their representation on the streets and across the kingdom. He could have acted like he care and instead he demeaned them.

We know the King doesn’t care about civil society or their rights. As he went for the ring-leaders and the public leaders behind the march today. Just like PUDEMO President Mlungisi Makhanya was arrested by the Police in Sidvokovoko 20km away from Manzini.

While answering the general public with guns, ammunition and state sponsored violence. The King has appointed yet another Prime Minister. This time it’s Cleopas Sipho Dlamini. The PM is yet another chosen one and not elected one.

Showing the deaf ears of the King who wants to be the absolute as long as he can and order his soldiers on the street to keep this idea alive. He rather use force and even kill civilians, than actually govern with heart. This king will be remembered for the tyranny and his use of force to keep it up.

The king has had the opportunity to listen. Today’s Sibaya only showed his arrogance and his entitlement. As everyone is just supposed to bow their knee to the King and be his servants. This was a show to find out who his enemies are and nothing else.

This Sibaya wasn’t about dialogue or even about reform. No, this king isn’t willing to give up a little power to be loved and be seen as respected leader. No, he rather use the guns and the armies to get his will. That’s who he is and his actions show it.

Now, Dlamini have to carry his dirt and sell it like a treasure. The new PM have to be the spokesperson and the loyal servant of the King. If he differs or act a fool. The King will take away his title and office. That’s how this system is and nothing genuinely good about it.

The King has refused to listen continues his warpath. He continues to use weapons to settle civilian matters. That says a lot about him. More than the words of a speech or address at any sort of ceremony.

The King isn’t a man for his people, but a man for his position. That is clear and there is no indication that he will give way. No, he intends to keep all power and not willing to see the general public picking who represents them. Peace.