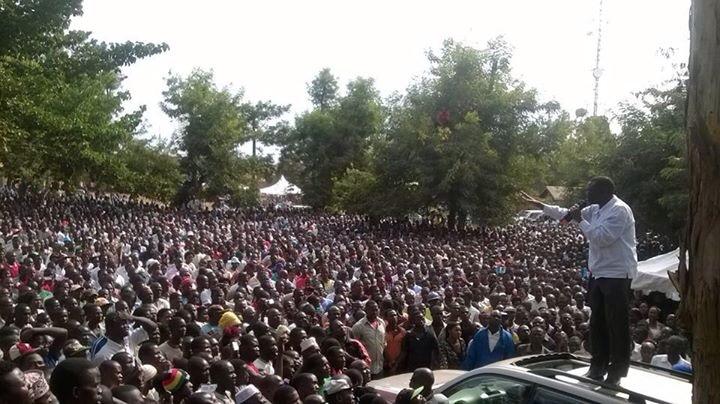 Yesterday on the 21.07.2015 the NRM regime cut off the radio transmitter for the “Baba Radio” or as it’s really named 87.7 Basogo Baino FM in Jinja after Dr. Kizza Besigye had a great rally earlier in the day in Iganga and Jinja. Therefore it made me go through the report on ‘Press Freedom in 2014 – Harsh Laws and Violence Drive Global Decline’ that is coming from the NGO Freedom house. Today on 22.07.2015 Mr. Innocent Anyole is sacked from his job after trying to interview Dr. Kizza Besigye this sacking happen by Radio Director Hon. Moses Grace Balyeku, the NRM Chairman of Jinja and MP for Jinja West Constituency. He sure followed party line and broke the wing of the man who introduced FDC man Dr. Kizza Besigye. Well, let me introduce the Press Freedom in East Africa according to the global rankings of the Freedom House and their report on how it was in 2014.

This report has three important levels of how the media is and which place in society it has:

The difference between them comes to how great power the countries government controls the media or let them be. How the laws and treatment of journalist and media institutions is and how the events surrounding them have been in the recent year.

I will focus on the East African Countries and those in the “area” around how the quote and place this countries in the report. Because I write about the South Sudan, Ethiopia, Democratic Republic of Congo (DRC), Burundi, Rwanda, Tanzania, Kenya, Somalia and Uganda. These are the countries that will be taken. Not the whole world but the basic places that I usually cover in my blog somehow. So it shouldn’t be surprise to anyone.

Before addressing the numbers and rankings of the nations, let me take the quotes on some of the nations from the report as well:

“Ethiopian authorities stepped up arrests of independent journalists, including the Zone 9 bloggers, leading more than 30 to flee the country during the year, according to CPJ” (…) “In Kenya contained several vaguely worded clauses curtailing press freedom, including the threat of three years in prison for journalists who fail to obtain police permission before reporting on terrorism investigations or operations, or for coverage “likely to cause public alarm, incitement to violence, or disturb public peace” (…) “Somalia’s score improved from 82 to 79 due to the increased ability of private actors to open media outlets and the greater distribution of media, especially radio, throughout the south-central part of the country” (…) “South Sudan’s score declined from 62 to 68 due to the government’s near-complete disregard for constitutional and legal protections for freedom of the press in 2014, as well as the lack of such protections in rebel-held areas; a marked increase in restrictions imposed on journalists by the security forces; and heightened censorship, self-censorship, and retaliatory attacks on journalists”.

From here I will address the rankings of the East African nations coming when it comes to press freedom and the numbers that they have gotten from the expert committees that gone through reports and the International Freedom of Expression Exchange (IFEX). The stories this numbers are telling and the situation that the media has on the ground is staggering. Therefore it’s a story that has to be told. Now will explain the criteria of the global ranking that is made of scoring process, the value of the levels and what they mean for each country and last the main groups of questions that the researchers and analyst in cooperation with IFEX. That has crunched the numbers with the questions and reports from sources from the whole world.

Article 19 of the Universal Declaration of Human Rights states:

Everyone has the right to freedom of opinion and expression; this right includes freedom to hold opinions without interference and to seek, receive, and impart information and ideas through any media regardless of frontiers”

“The research and scoring process involves more than 90 analysts—including outside consultants and members of the core research team headquartered in New York—who prepare the draft ratings and country reports” (…) “the other members of the International Freedom of Expression Exchange (IFEX) network for providing detailed and timely analyses of press freedom violations in a variety of countries worldwide, on which we rely to make our judgments”.

Scale Point for the levels:

Questions that makes the score:

Placing of the East African nations:

This tells something about the environment that the press in the East African nations goes through. Of the eight nations three is ‘Partly Free’: Kenya, Tanzania and Uganda. This means that certain levels of freedom is on the media, but has certain levels of strings on the press. It’s worse in the rest of the nations because they are on the level of ‘Not Free’: Burundi, DRC, Rwanda, Somalia and South Sudan. And they did make Somalialand as a separate territory as a ‘Party Free’ whiles the country as a whole is set as ‘Not Free’. Therefore in that setting certain areas of Somalia federation has more freedom then the rest.

What that is shocking for me is how low scores countries of Uganda has compared to Ethiopia. Ethiopia has been strict on media and journalist. Especially to those who are abiding opposition in the country. Uganda has many outlets, still the big ones has over time been disorganized by the regime like the Daily Monitor. That has not happen with similar media in Kenya. Though the laws for media there is isn’t similar reports on shut downs of radio station and papers when the regime disagrees. Rwanda I am sure that the government is strict on the media, because the news from there is usually in the mood of the regime. Burundi if it wasn’t for protests and deflectors, there would be less news and information on the regime of Pierre Nkuruziza. DRC and Kabila haven’t put this into motions after all the issues that have been in the last decades. The regime has control and want to be sure of the information that is put out. Therefore when you hear something negative it’s from the UN bodies or MONUSCO but not the press of the DRC or journalists. Tanzania has its freedom but also strangles on the media. The party has been running the country since independence so the feelings is that their intertwined and feel like they are together, instead of actually being critical of the politicians and society. But it should be worried that the different countries and how big the difference between the top and bottom of the scale in the East African. From Tanzania who got 54 points and the worst was Ethiopia got 83 points – the close competition was Rwanda, Somalia and Democratic Republic of Congo got all 79 points on the scale. 60 Points scale is the max for the ‘Partly Fee’ media nations. So that the environment is on a far level from partly and even longer way to being free. The thing that is worrying is that it’s less than 5 points from ‘Partly Free’ to ‘Not Free’ with Uganda, Kenya and Tanzania. It’s just small tweaks and harassment of the media and in 2016 report will degrade this nations and how the media has a place in these countries. Though it doesn’t look to good, but hopefully I and others can be surprised. Until then let hope that the media get into a place where they can actually monitor their areas and speak their minds without fear or legal repercussions. Peace.