Archive for the tag “EACC”

Today on the 29th January 2019, the Senate did impeached the Kiambu County Governor Ferdinand Waititu for abuse of office. On the 27th May 2019, the Ethics and Anti-Corruption Commission (EACC) released their press relase, where they officially started investigations into irregular tenders of the value of Ksh. 588 millions, which they had started on 23rd May 2019.

In early May, the Governor had to answer his budget for the Senate Public Accounts Committee, where they were questioning a Ksh. 1 billion, which was allocated to State House functions and even South Sudanese Peace Programme. Those programs are for the State not the County to look-over. His defence back-then was that his financial department had used a template used by state, while the Auditor General confirmed that he had gotten financial reporting containing these expenditures submitted to him.

On the 26th July 2019, the Office of the Department of Public Prosecution (ODPP), which even mentioned the fantastic company getting the favourable tenders from Kiambu County. That company was named M/s Testimony Enterprises Limited. Where there was irregular payments to the company and also using these funds to buy an hotel together with his wife. That hotel was Bienvenue Delta Hotel, which was bought with these funds.

On the 27th July 2019 the EACC released their second press release that they were looking for the governor and his associates. As they had initiated for their arrest on the 13th July 2019. Therefore, the case that was held and voted on in the Senate. Had already been investigated by the authorities.

Now, today the Senate has validate this and the shady practices made by the Governor. His actions has cost him. His mismanagement and misusing of the County Government funds. Trying to forge an audit and records to look clean, when he really did use an associates business and tenders to enrich himself. That is the reality of all of this.

Governor Waititu might not be the only doing this, he was one taken down today. We know that Governor Sonko and Kidero is answering for crimes committed too. Who knows if they will get the same sort of action by the Senate. That in regard to Sonko, as he might be next up in line.

We now have seen action by Senate to act upon on Governor and impeach him. That is serious and also question, if they will do to others or only picked this man. To show some flex and ability to work for the common good. Then they should also look into others and their questionable use of state funds. Because, in Kenya, Waititu is not the only man doing this.

Time will tell, but this is a big leap. A Governor been taken down by the Senate. Who can wonder is coming up next. Peace. 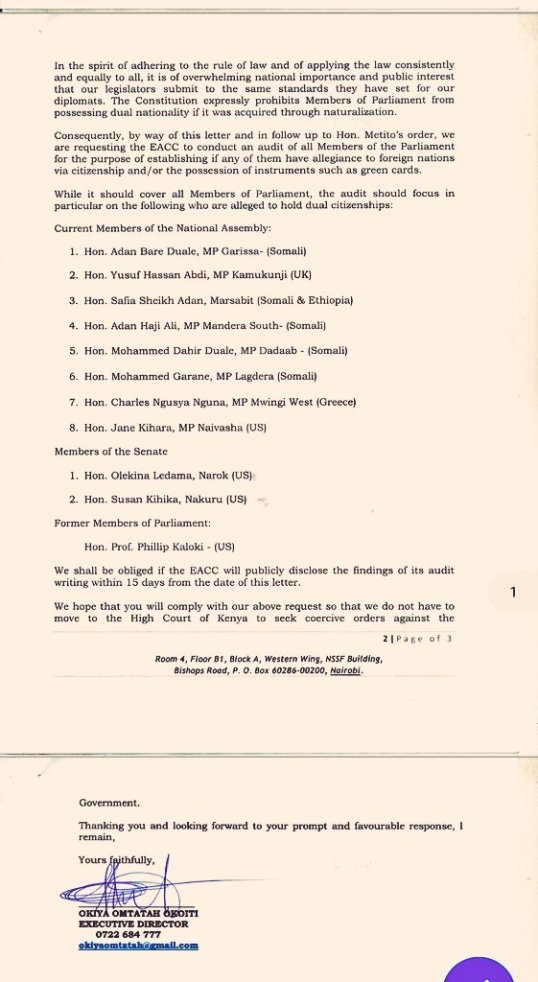 EACC: Press Statement on Investigations regarding Alleged Irregular Award of Tender for Upgrading of Roads and Embezzlement of Funds by Officials of County Government of Kiambu (27.07.2019) 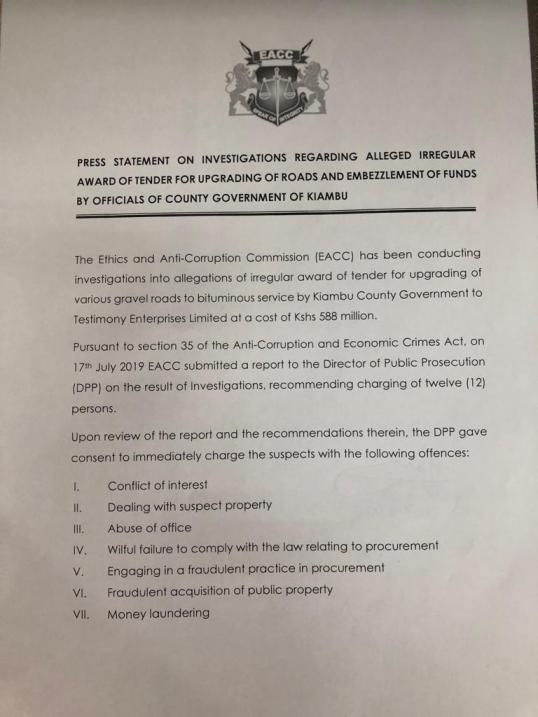 Opinion: DP Ruto is something else, but truthful his not!

“This is an occasion where we can speak to ourselves candidly without considering who is in government or opposition. The subject today is a new dawn for our country and what we should all do. We must rid our government and institutions of corruption. ‘ A New Dawn’ is a good subject for us all to engage in theft and corruption is bad in any language. From my mother tongue it is said… “ A thief may be intelligent but not more than the investigator” To our investigative agencies, you have our support as you help us deal with the challenge that we have. The 10 commandments say – Do not steal… Do not bear false testimony. The President and I were once victims of false testimony. It took hand of God and prayer for us to get out. We do not want any Kenyan to suffer such again. As we pursue this noble course, we must remember to inspire the hawker to own a kiosk and kiosk owner to own a shop and shop owner to own a mini market, and a boda boda rider to own a car” – Deputy President William Ruto on the National Prayer Breakfast on the 30th May 2019.

DP Ruto is the career politician, the man who says whatever to walk scotch-free and get other people in trouble. His really bold and brazen, he knows what his been up too, but still acts like its nothing.

Ruto knows how his grown wealth, built an empire and owns several of estates. The DP haven’t got this out of goodwill of the state, but out of the shady backdoor deals and land-grabbing. This is well-known stuff, therefore, the DP knows his corrupt and his actions. Still, he speaks like his still the innocent broke preacher he was back-in-the-day.

The Hustler hasn’t hustled through the proper channels, his wealth has grown and deals done while in government have surged all his accounts, his estates, businesses and even corporations. That is the sort of man he is. Therefore, his pledge to work against corruption, means initially work against himself and all of his associates. All of which is preposterous.

Secondly, it wasn’t an act of god that stopped the ICC case against him and Kenyatta. That was well prepared work from your associates and officials in the Republic. As the Judge Eboe-Osuji “declared a mistrial in the case, because it cannot be discounted that the weaknesses in the Prosecution case might be explained by the demonstrated incidence of tainting of the trial process by way of witness interference and political meddling that was reasonably likely to intimidate witnesses” (ICC – ‘.Ruto and Sang case: ICC Trial Chamber V(A) terminates the case without prejudice to re-prosecution in future’ 05.04.2016).

If intimidating witnesses is answers from God, than the God, DP Ruto confesses to at night is totally different than mine. Surely, my God answers prayers too, but not with possible tainting legal process and using harsh methods against the ones who will testify against you. That is what was done in the ICC case and therefore dismissed. It wasn’t false testimony, it was making people afraid of even speaking out on the mischief being done.

That is why I am not accepting the words of DP Ruto. He tends to lie and bend the truth to his advantage. This is just a snippet of his speech at the National Prayer Breakfast earlier today. Surely, he said more things whose was disregarding the truth. Still, I focus on this, because. Unless, the Life-Style Audit hits home, unless the war on corruption takes down his fraudulent activities. It is hard to believe it is real. Peace.

Kenya: Press Statement by the Ethics and Anti Corruption Commission on Media Allegations about Robbery by EACC Staff (14.02.2019) 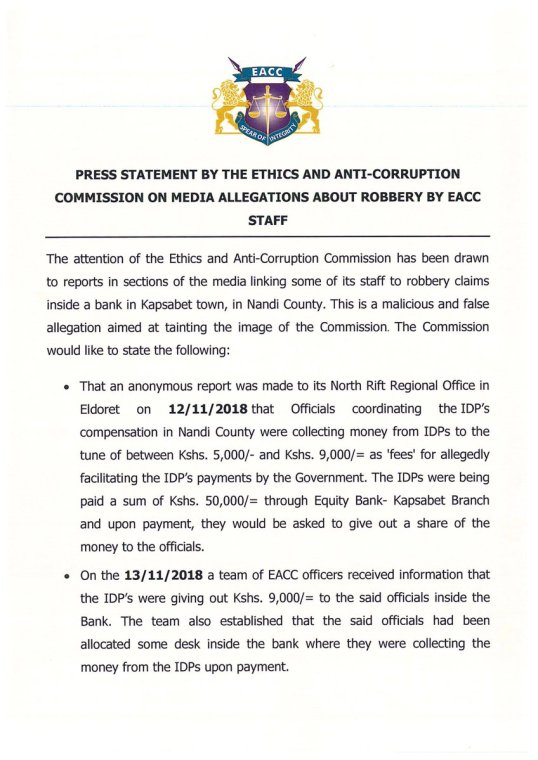 Answer from the School to EACC: 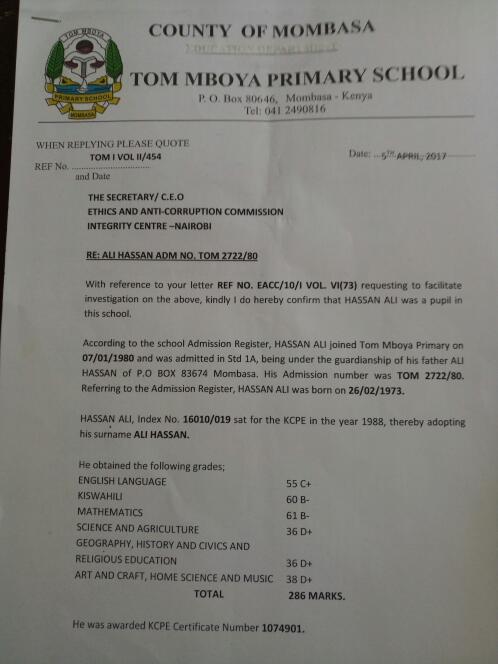 “Kilifi Governor Amason Kingi is at this hour being interrogated by the ethics and anti-corruption officials over claims of embezzlement of millions of shillings of public funds in his county. Kingi who arrived at the integrity centre an hour ago is accompanied by a host of ODM leaders and is expected to shed light on the spending of 51 million shillings in unexplained expenditure as well as 308 million shillings meant to acquire an 11 acre land for a bus park in Kilifi. Sam Gituku is at the integrity centre and Sam, what should we expect from the grilling session?” (Kenya Citizen TV, 2016)

Kenya: Press Statement on the Status of the Recruitment of Chairperson, Ethics and Anti-Corruption Commission (21.11.2016)

UN Experts criticize Kenya Police for Excessive Use of Force against Peaceful Protesters (10.11.2016) 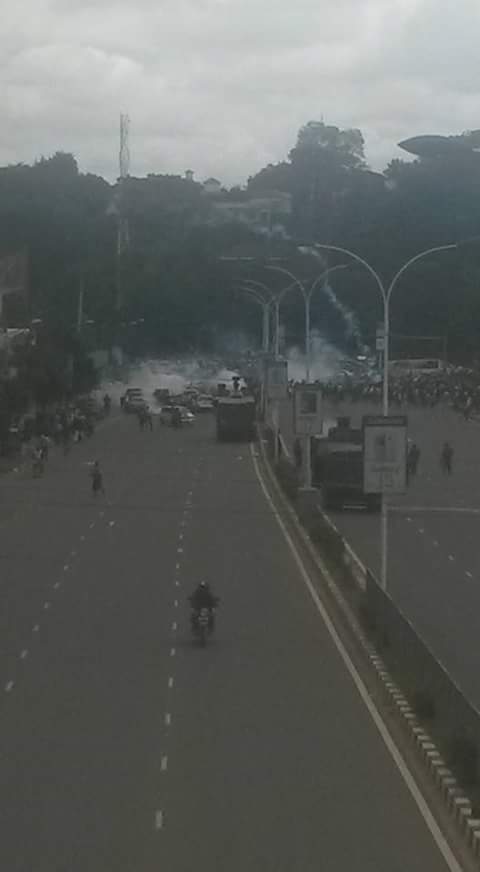