I cannot and as I am together with others, who stand for justice, rule of law and freedom cannot forget the brave men like Sam Mugumya, who has been detained in Democratic Republic of Congo, as he was traded for the release of M23 soldiers and deported to the Congo. Something that is disgusting enough as he has been portrayed by the Ugandan authorities as an Allied Defence Force (ADF-NALU) which is a guerrilla that cause havoc in the DRC.

With that all in mind his been detained since 2014, today is his birthday, certainly he will not able to celebrate it or even enjoy it. He is innocent and rotting in prison because of the exchange that was between DRC Authorities and Ugandan counterparts. Certainly that deal was made with some perks.

In August 2016 there we’re reported that 300 Ugandan citizens we’re detained and in prison in the neighbour country, many of who is said to be connected with the guerrilla – ADF-NALU, but some of them are certainly framed for that as proven with Sam Mugumya, who has been parts of Activist 4 Change with the Walk to Work protest in 2011 and also been a pivotal political force inside the Forum for Democratic Change. Therefore the NRM Regime wants him away and silences him, the best way in a foreign prison where his voice doesn’t matter.

With this recent report isn’t positive considering his case: “In a government statement to parliament last evening, the State minister for Foreign Affairs Henry Okello Oryem revealed that the authorities had declined to have Mugumya released since the matter was under the military establishment in the DRC” (…) “Okello also says that Mugumya may not be extradited soon due to absence of enabling policies between the two governments despite several interventions” (Kyeyune, 2016). So the case has become military after the extradition and prisoner exchange in 2014, therefore the fate of Mugumya is in the hands of Congolese Authorities. The Ugandan ones are towing their fingers as the former Besigye aide is dwindling away and not has the ability to get freedom as he is a political activist and not a terrorist. That is big difference!

Ivan: “How did you know they were CMI operatives? Were they clad in uniform?” Sam: “They had army uniform and they introduced themselves to me as such. On the first day, they were two. They asked if I had links with ADF then shortly after said I was coming to link up with the People’s Redemption Army.  I told them I was just running away from your brutal regime. On the second day, another set of three CMI operatives came. I remained in Beni for three weeks before I was called for a joint interrogation between Congolese authorities and CMI.  They debated if to bring us back to Uganda or hold us in Congo” (Okuda, 2015).

“Ivan: “The regime back home accuses you of involvement in subversion, terrorism to be precise and government spokesman Ofwono Opondo and UPDF spokesman Paddy Ankunda both stand by this claim. What is your take?” Sam: “It is not true I was involved in subversive activities. I have been involved in legitimate activism which is a fundamental right, to support or oppose a regime. But Mr Museveni and his henchmen like all tyrants mistake principled Opposition for subversion. There is a history to this. In 2011, Ingrid Turinawe, Francis Mwijukye and I were charged with terrorism and the case fell flat because it had no legal limbs and was built on falsehoods. Repeating these same allegations is essentially putting into perspective why we are here. Museveni has always made his position clear; that he is not comfortable with courts granting bail to capital offence suspects.  Of course, he is not interested in the rapists and murderers; he is simply clothing it as capital offences to net political activists. We are the real target” (Okuda, 2015).

When you hear his story that he flee from Uganda because of the possible prosecution and the indicated issues with the brutal regime, that means that the courts and indictment we’re predicated to take him down. The Congolese Authorities just used that and reprimanded him, while they still had been served with Ugandan intelligence to pick-up the activist and take him to prison. Something that is vicious and shows the collaborate effort to harass fellow citizens and also use the military together with security operatives to make sure the people like Sam Mugumya get behind bars, where he still is without question.

His is lingering in jail, but he is not forgotten, as much as the other activist both Ugandan and Congolese who is still behind bars. As the Authorities are keeping them silent behind bars instead of being free to challenge the ones in power. Peace. 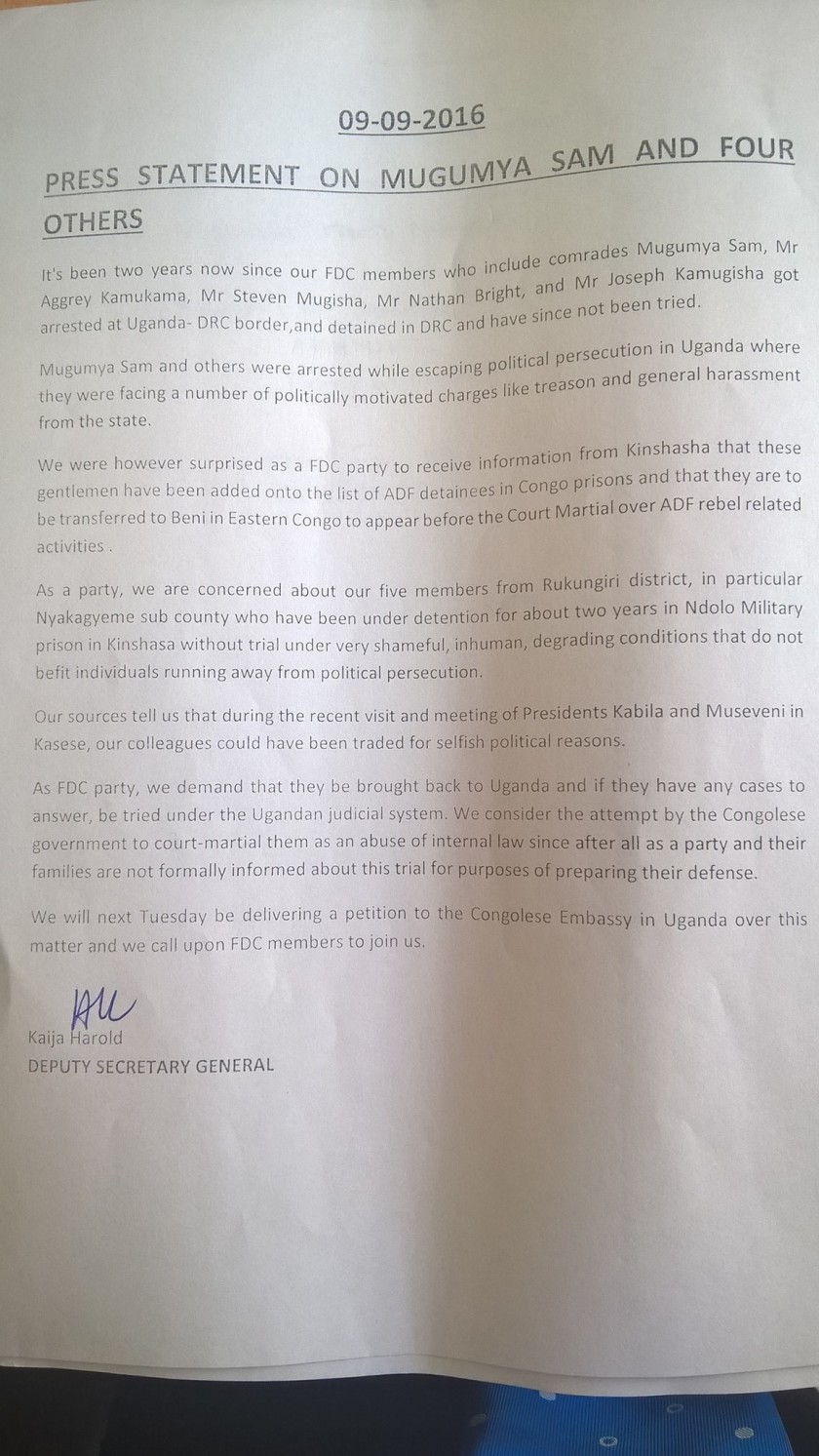