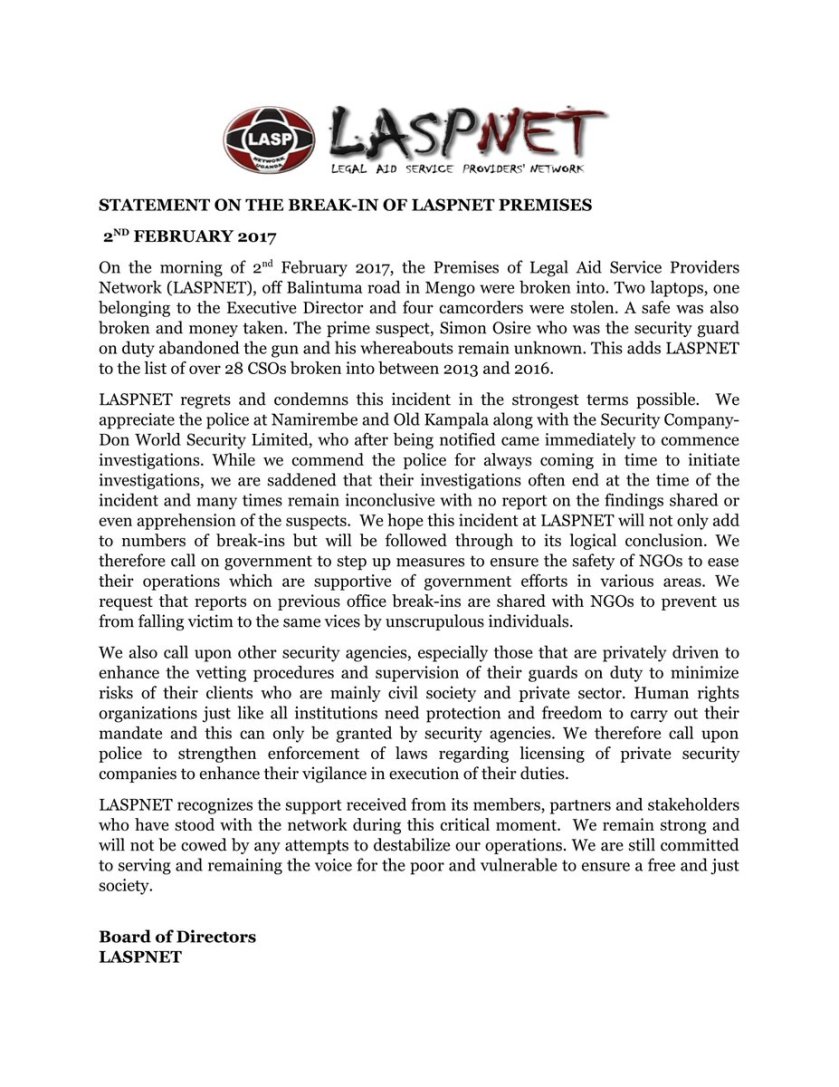 Human Rights Awareness and Promotion Forum (HRAPF) who have offices at Kitakula Road, close to Gadaffi Mosque and are in the area of Mengo; so this in the Old Kampala area and metropolitan Kampala. This is where unknown people have attacked the Human Rights Non-Governmental Organization, and even robbed the office.

There are other indications that the attackers of the offices also killed a guard, ransacked the office and also cut of the alarm, while they took cameras and such (Adrian Jjuuko, 21.05.2016).

“BREAK IN AT Hrapf Uganda. There has been break in at our offices today in the night and our guard killed in cold blood in the process. Specifically, they broke into the office of the Executive Director and the Deputy Executive Director Programs. All lockers and shelves in the Executive Directors offices were ransacked. All cameras were cut and unplugged. Police has already surveyed the premises and investigations are going on. We have managed to get some footage on the cameras showing four people entering and pouncing on the security guard some of whose faces are visible on the footage. Evidence points more at information rather than property as the motive of the break in. We are now in the process of replacing what was destroyed and beefing up the security at the office. Our heartfelt condolences to Emma’s family family, the guard who died protecting our work” (HRAPF, 22.05.2016).

We can speculate why this has happen and now, as the Human Rights are attacked when it comes to freedom of speech and liberty of political opposition. While the Police Force and Army are so entangled with the ruling party, that they are more a political force, than securing the safety of the people; this is the reality as even an innocent NGO get their offices raided. There not too long ago since the Human Rights Network for Journalist (HRNJ-Uganda) was stolen and raided twice by unknown people. So the killing of the guard of the Office, is just a sad ending and a tragedy. As the NGO HRAPF-Uganda. 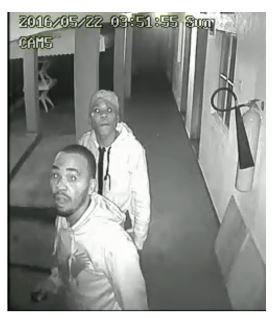 If you know anything about these men! Please contact it here to the Mail-address down below!!

“If you have any information – please contact Melanie Nathan commissionermnathan@gmail.com  – until we are able to provide a direct investigator to contact”.

This is what I know for now. This is just clear violence against an innocent NGO, from somebody either just thieving or connected with government who wants to silence the NGOs from questioning the NRM regime, so there things and actions we can consider. As there hasn’t been taken charge of the ones that raided the HRNJ-Ugnada, so why should the Police Force have the ability or wanting to find out who raided the HRAPF-Uganda? Peace.