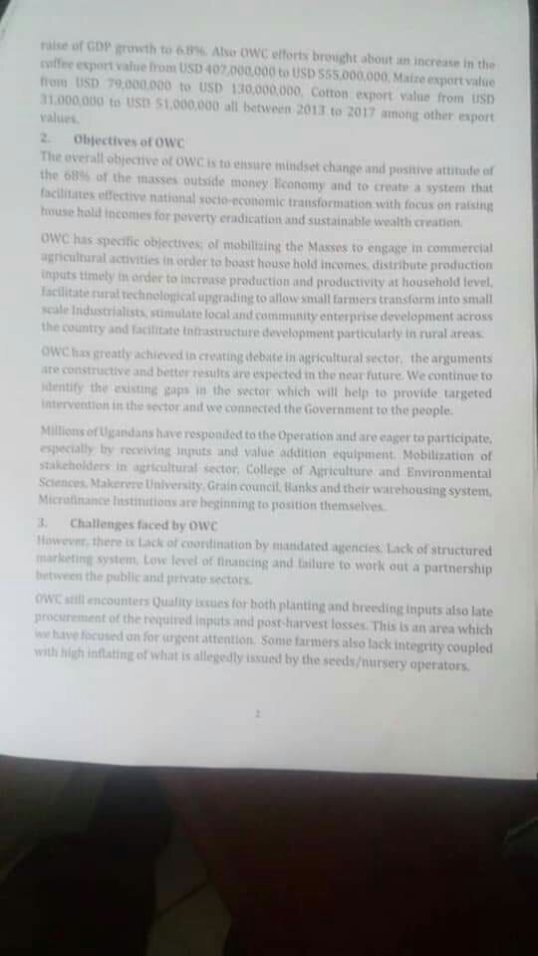 “People should not claim they are waiting for government programmes in order to develop themselves. A pig will not resist to be taken to the market for sale or slaughter just because the road is not tarmacked” – Yoweri Kaguta Museveni on the 22nd July 2018.

There are some ironies with today, especially the mixed messages from President Yoweri Kaguta Museveni. As he was saying that the public should not expect the government to deliver programs for their development, while he is supporting and his government through the Operation Wealth Creation (OWC) and the State Minister for Tourism Godfrey Kiwanda who was starting Kisboka SACCO in Mityana District. So, it is weird that he is donating money to a project for development, while saying people shouldn’t expect the state to contribute funds. Is he dumb? Just take a look!

“Our Commander in Chief H.E President Museveni officially launched and accepted to be the Patron of the poverty eradication drive called Kisoboka (It is possible) in Mityana North. The drive, that was initiated by State Minister for Tourism Hon. Godfrey Kiwanda aims to bring about positive mindset change towards poverty eradication, job creation and wealth creation mainly though agriculture; It is already very popular in North Mityana Constituency with over 250 households joining the bid to earn at least 21.5 million shillings per annum” (Operation Wealth Creation, 22.08.2018).

“I gladly accept the request that I be the patron of Kisoboka SACCO and I will make a Shs50 million contribution towards its activities” (Museveni, 22.08.2018).

It is really not much to say, but if this works, the SACCO might do something positive to the public and citizens of North Mityana Constituency, however the OWC is not known for good seedlings and neither well-organized model of development. Therefore, this might fall flat and be empty promises to the district and constituency. We can hope for something else, but it might change for a very selective few.

This might just be another PR Stunt and a way for Kiwanda just to pocket money from the taxpayers or even shield his funds he is earning as a State Minister and MP. What is more ironic, is that the President talks of not waiting for the state to deliver development, while his state is launching possible development projects through the OWC. It is should be obvious. If he was a sincere man, he would see that.

He talks of not getting promises of development, while delivering a development projects… It doesn’t make sense.

That is just me though… I cannot be alone, but when you just have empty suits and yes men around you. You turn into this creature, this bloated arrogant prick who doesn’t see poverty; while living in lavish luxury on the state. Peace.

Parliamentary Report spells out that the Operation Wealth Creation (OWC) is a totally flawed initiative!

As the 10th Parliament and one of their committee has written a report on the Operation Wealth Creation (OWC), this one lead by the man who is named General Salim Selah. There has been seen to see fruitful results to the government sponsored projects, that is for the cash-crops and other agricultural outputs. But the report that is made today in Parliament isn’t really saying much positive about the initiatives. As this OWC that are part of the Office of Prime Minister Dr. Ruhakana Rugunda, he surely will looked failed together with Gen. Selah.

It is clearly stating the OWC as failed initiative, as the delivery is flawed, it is done without information sharing, without local knowledge or input into how they want it. The leadership from the top has decided and gives the seeds and seedlings when they feel like it. Without any concern of the districts and their OWC administration, as they do not have facilities for the deliveries done by the OWC. Certainly, there are decisions made by OPM and the General without clear leadership, neither listening to the farmers they are supposed to help to enrich. Instead, they are more delivering sub-standard services and not working for others than the ones on the top. Just take a look!

“OWC is coordinated by the Senior Presidential Advisor on Defense and Security. He heads the team of directors at the headquarters in charge of inputs, low cost housing, value addition, pensions among others, They coordinate all activities of the operation such as planning, evaluation, supervision, monitoring and evaluation” (Republic of Uganda, P: 2, 2017).

“Operation Wealth Creation distributes inputs late. Because of this, people do not pick them especially seedlings and they go to waste. For example when the Committee undertook the field visit to Agago, Oyam and Nebbi, it was informed that the inputs had been delivered late in September/October and were also planted late. The crops planted could not withstand the long dry spell that run from late November till late March and ended up dying” (Republic of Uganda, P: 3, 2017).

“Most of the suppliers of seeds and seedlings do not own nurseries. They buy from uncertified nursery operators and end up compromising the quality to meet demand” (Republic of Ugandan, P: 6, 2017).

“Some people complained that OWC “dumps” agricultural inputs that are not required by the beneficiaries for example the people of Nakaseke complained that they are given too many mangoes and oranges yet they would prefer food crops like maize and beans instead” (Republic of Uganda, P: 7, 2017). “OWC uses the top bottom approach. People are not consulted before supplying therefore people are sometimes given what they do need for example people in Kubuku district complained that they were given the variety of mangoes that they not need” (Republic of Uganda, P: 7, 2017).

If these quotes are not proving that the OWC is totally flawed, it is heavily run by the General Salim Selah and under the Office of the Prime Minister (OPM) Dr. Ruhakana Rugunda, who are in-direct charge of the OWC. The OWC seems more like a fine slogan and signs, but the secretariat are not controlling or informing as it should. Neither is it listening to the ones that are supposed to benefit from it. Secondly, the programme doesn’t even monitor the results. Therefore, the results and the evidence of the having it is more on the feelings of Gen. Selah and the President Museveni. Not on the farmers who could instead have district boards on Co-Ops on Inputs. Instead of a centralized Museveni family controlled organization, that is clearly not doing what is supposed to do. It seems futile and not to be there for anyone else, then the ones appointed by the President and the companies they buy the seeds and seedlings from!

OWC isn’t for the farmers and for growing better yields, right now it is a non-transparent, top bottom leadership without any care for the districts who needs help and need government subsidized seeds and seedlings. If it doesn’t change… than the government can just pocket the monies, instead of just spending monies at the wrong time, for the wrong farmers and for the late season for growing the seeds. Peace.

Republic of Uganda – ‘Report on the Sectoral Commission on Agriculture, Animal Industry and Fisheries of the Implementation of the Operation Wealth Creation Programme in Uganda’ (May 2017)