The Trump Organization and the Trump family is in the middle of a huge quagmire. As the accounting firm Mazars have dropped some knowledge on the financial practices of the business in question. If you think this is bad, well… this is in the lane of Bernie Madoff and Arthur Anderson’s own practice, which also became a court case and several of felonies on both parties.

Mazars will not be able to run away from this legal case. The Attorney General of New York is still building their case and looking into the financial records of the Trump Organization. The Trump Organization can now be questioned for a decade of financial statements and usage of these in various of operations.

Because these documents can be inflated in one way to sell and get more revenue from creditors who the Trump Organization got loans from or scaled back when paying taxes to the State of New York. Therefore, there is possible wire-fraud, tax-fraud and other similar criminal conspiracies to pin on the company. Which at this point of time wouldn’t be shocking.

What should also happen now as the investigations are going on. The creditors and the ones covering the liquidity of the Trump Organization should be worried about the assets and the real value of the company. Since Mazars are saying the financial statements are unreliable. That means the Trump Organization could have lied about the profitability or the value of any enterprise, LLC or even properties of which in the hands of the company.

That Mazars stops vouching for the company and the former first family. Really signals that things are dire and not in good place. That the accounting practices and the state of the business isn’t in a great place. The Trump Organization has to get a new accounting firm and prove their numbers there. While Mazars has to answer for the ten-years it says is unreliable and not trustworthy. That says something they we’re accepting for years, but now says is wrong.

They are all in dire distress here. The same way things went wrong for the pyramid-scheme of Bernie Madoff and accounting firm Arthur Anderson. Who had to answer for these practices and lack of proper accounting from them. While they where grifting from all of their clients.

Now in 2022 we can now see the Mazars and Trump Organization have to answer for this. The Attorney General have to continue the investigation and discovery of documents into the companies. As the truth has to come out and we will know. However, the Trump Organization is in trouble.

As they have to carry huge debts, which is of unknown amounts of million dollars and that has to restructured. While he has secure his assets and possible salvage of the company, which can destroy the reputation of the company further. Now, we just have to see if the banks or the creditors accepts the financial statements. That we will see in the close future and how things are going.

Because, money talks and bullshit runs a marathon. Peace.

“Reportedly coined in 1939, the term white-collar crime is now synonymous with the full range of frauds committed by business and government professionals. These crimes are characterized by deceit, concealment, or violation of trust and are not dependent on the application or threat of physical force or violence. The motivation behind these crimes is financial—to obtain or avoid losing money, property, or services or to secure a personal or business advantage” (Federal Bureau of Investigation – White-collar Crime).

The House Committee on Oversight and Reform have looked into documents from the General Services Administration (GSA) detailing the lease of the Old Post Office Building in Washington D.C., which has been made into a Trump Hotel. The documents and financial transgressions is now blown a lid off.

That’s why the Former President Donald J. Trump came out with a statement that the Republican’s should vote in 2022 (midterms) and 2024, because the 2020 election wasn’t rectified or overturned as he wanted. This is what created buzz and headlines… while the financial crimes of the Trump Organization in concern to this hotel was becoming secondary.

Trump and his companies withheld information of a loan from Deutsche Bank, which in 2018 gave him a $170 million loan. While he was in office, the hotel earned $150 million and out of that he received $3.7 Million from Foreign Governments. He also concealed $70 Million in Net Losses. In addition, he concealed other debts with other properties as he was bidding for the Old Post Office Building. He hid this information of $1.1 billion of debt in 2009/10 in the financial documents when he applied to the GSA in 2011.

All of these things can be seen as corporate fraud, which is White-Collar Crime and he has also possibly violated the Foreign Emoluments Clause with the “donations” or millions of dollars from Foreign Government to the Trump Hotel. All of these things should be investigated directly and the Department of Justice should takeover from the House Committee on Oversight and Reform. So, that this can a discovery and subpoenaed further.

We are seeing the will to hide, deceive and lie to entities to get profits. The conceal the facts and get beneficial treatment. While also ensuring illegal means to get the ability to rent and run an hotel while being in office. The Trump Hotel at the Old Post Office needs a serious investigation and possibly more deals done by the Trump Organizations. Since this is just one of plenty and now that his not in office. The state, the committees and state attorney generals can push these cases. That is needed. Because, it has been proven in the past of transgression and illegal activity done by Trump.

That’s why Trump isn’t allowed to run a charity or a foundation. Neither, the former President was charged and had to pay fines for his fake Trump University too. Therefore, expect more to come and more cases to possibly happen. This just shows what his willing to do and using the Presidential term to earn more money. Peace. 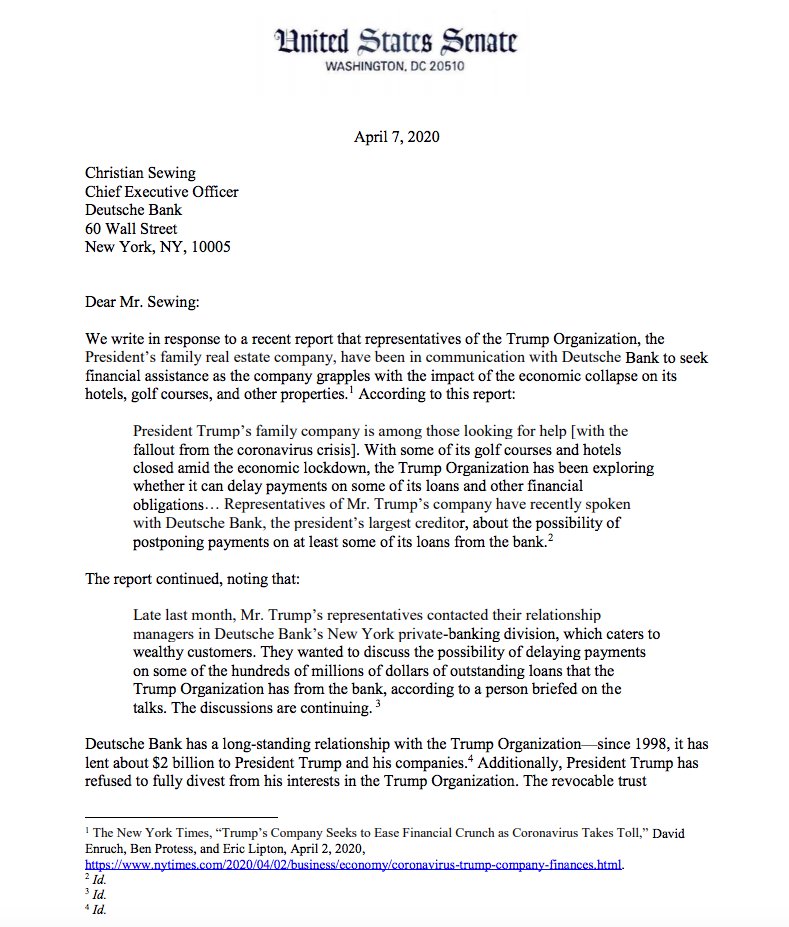