Lord Mayor Lukwago on House-Arrest for the ninth day and gave something to the Police Officers: “are now beaming with some little excitement as their ration for lunch” 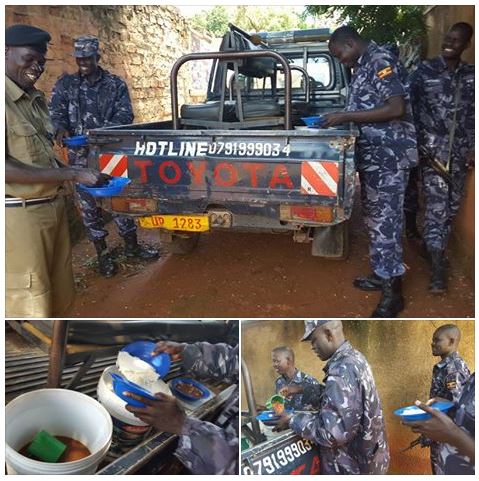 It has gone nine days in captivity and the house-arrest of the Lord Mayor of Kampala Erias Lukwago, they are so much over the penal codes and laws, that it’s foolish to speak about, since President Museveni couldn’t care less. He is busy of the laurels of yesterday at Kololo, while the FDC and the Opposition is still under siege. The house is besieged, still Lord Mayor have defended and spoken about the care of Police Officers.

Today it wasn’t just talk, but actual action from the Lord Mayor who shows heart and not only words. It’s a small gesture, but proves the greatness of this man as a man who is detained in his own could acted totally different towards the ones that keeps him captive there. Instead he shows heart with a bite of food. That is Nobel and the men and woman of Kampala that have him as their mayor should be proud! Look at the picture and his statement.

“DAY 9 OF HOUSE ARREST. My ”co-prisoners/ inmates”, who have been in a sombre mood throughout the better part of the day, are now beaming with some little excitement as their ration for lunch /supper is delivered in buckets with inscriptions; ”Sadolin weather guard paint”. Am sure some police honcho should be profiteering from the agony of these innocent policemen” (Lukwago, 13.05.2016).

Lord Mayor Lukwago on a unlawful House-Arrest for the 8 Day; while Museveni have a lavish celebration at Kololo! 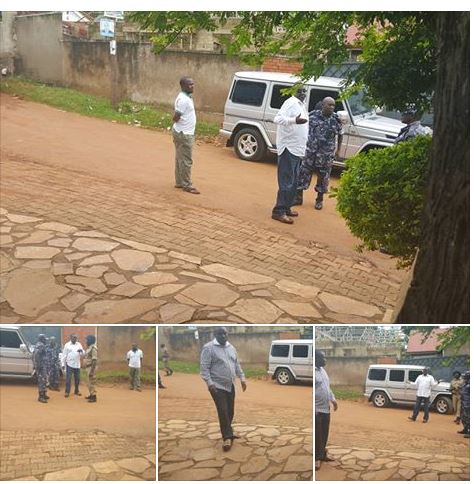 The dark shaddow over the day is knowing that so many of Opposition is unlawfully detained and silenced as the giant feast is happening at Kololo. The country is diveded between the men and woman who lavishly have it all and the ones who doesn’t have basic rights even. Therefore the UCC and Government had to even ban Social Media and make the words of mouth silenced, though there ways of countering that.

Still, and still! The Lord Mayor are behind bars in his own home, still without charge or warrent, his words says it all. Take a look! 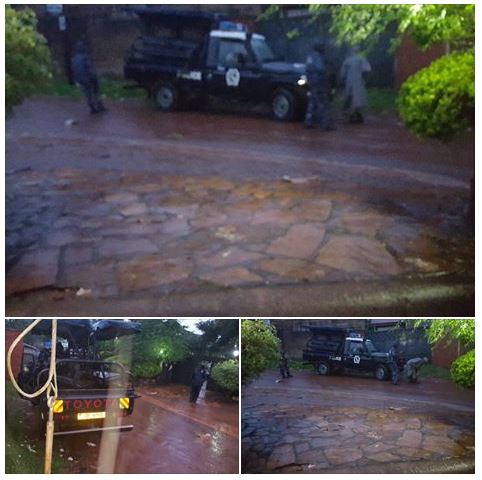 “DAY 8 OF HOUSE ARREST. It’s certainly a day that will live in infamy. You cannot drag a young nation into a devastating 5 year guerrilla war and renege on the promise to restore a sustainable constitutional order that would guarantee orderly succession to power; bastardize the entire nation and turn it into a personal estate; organise sham elections and entrench a personal rule for 30 solid years; institutionalise a reign of terror, persecute and humiliate your political opponents, including your contemporaries like Dr. Besigye, Gen. Ssejusa, Gen. Muntu, Mbabazi etc; and then, majestically match to the Kololo independence grounds, stand by the graveyard where the remains of Yusuf Lule and Ignatius Musaazi were interred and proclaim that you derive inspiration from the likes of Mugabe, Nguema, Idris Debby, Santos, Biya etc. With all due respect, Sir, I wouldn’t attend that function even if I had not been incarcerated at home” (Luwkago, 12.05.2016).

Gen. Sejusa got arrested by the Police at Lord Mayor Lukwago’s home!

Well, I am sure the Gen. David Sejusa a.k.a. Tinyefuza visited Lord Mayor Lukwago on his birthday. That was illegal it seems by the Uganda Police Force; as they arrested him there and henceforth detained him somewhere! He is now again back in the hands of the Police as he was recently released after the issues with Police around February 2016. This just had to happen at one point, as Gen. Sejusa is an issue President Museveni can’t get rid off. Peace.

Lord Mayor Lukwago on House-Arrest on the Seventh Day – Celebrates his birthday in incarceration! 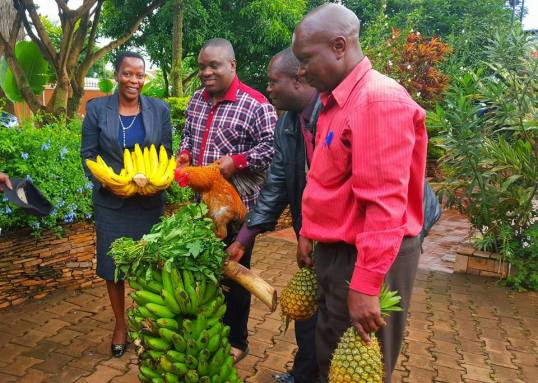 This here is never-ending saga as he now feeling the same as Dr. Kizza Besigye, Besigye was last time 40 days under House-Arrest in Kasangati. Now it’s been 7 days for both of them. The leaders of Forum for Democratic Change are under siege and their homes are not free as the country is neither free and under the control of President Museveni. Who shows no mercy towards his opposition and the ones who are not loyal to him.

Still it is good to see that the Police Officers open the doors to fellow citizens to greet the Lord Mayor as they could have done what they do in Kasangati. In Kasangati anybody who tries to visit Besigye get Detained! So this here is something positive in the midst of darkness. 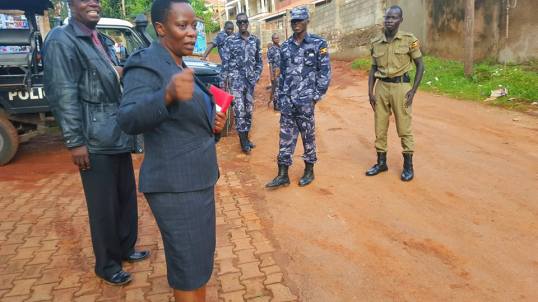 Well, here is his statement and read it.

“DAY 7 OF HOUSE ARREST. What would ordinarily be a special day on my personal calendar unfolds with such uncanny feelings, pondering how it is going to be yet another vile experience in my life as I commemorate my 46th BIRTHDAY anniversary under illegal incarceration. I was on the brink of flipping the lid and vent out my anguish on this Platform, but then I reminded myself that great icons of civil liberties like Mandela did not have the luxury of celebrating such memorable events in one’s lifetime for over two decades. The only one little thing that has given me a fresh heart, though, is the sweet mother-to-child telephone conversation I have had this morning with HAJJAT SALMA NAKAYAGA. At the tail end of the said soothing talk she quipped, in a rather frail and resigned voince; ”YASI (she has fondly called me like that since childhood) nze ensonga z’omusajja oyo akutulugunya nazikwasa munyazimungu yatalemelerwa”( I placed the controversial matters concerning you and your chief tomentor in the able hands of the almighty). I should also acknowledge the kind gesture of my dear sister, Hon. Mp Bakireke Nambooze, Hon. Moses Kasibante, some Authority councillors, city mayors and a score of other friends and relatives, who paid me a courtesy call and generously brought lots of foodstuffs for my persecuted family. Of course, I can’t forget all of you, my amazing friends; your unflinching support and encouragement has definitely enabled me to soldier on against all odds. Together we shall overcome what apparently many pessimists perceive to be insurmountable challenges. For God and My Country” (Lukwago, 11.05.2016). 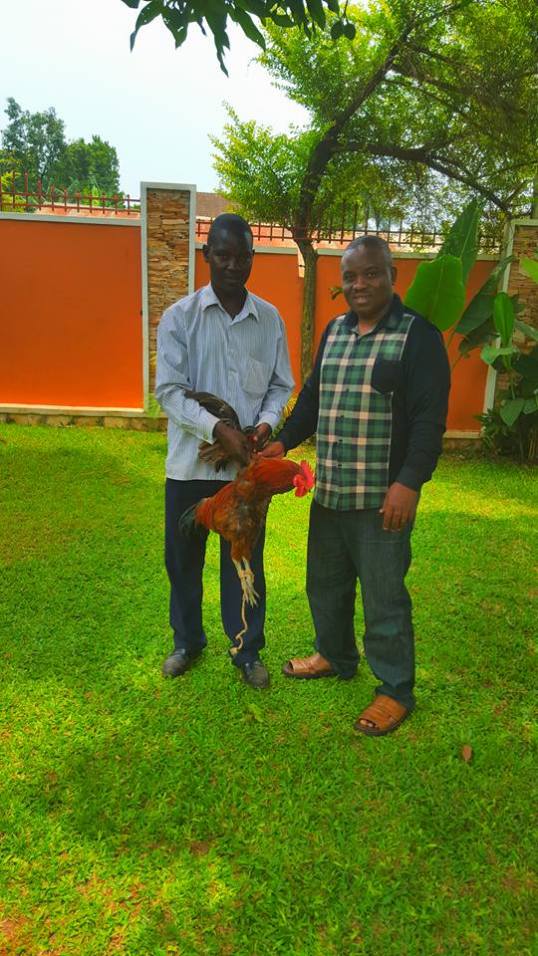 I think that is enough for now. Congratulation on your day Lord Mayor Lukwago and you shall overcome! Peace.

Lord Mayor Lukwago on the Sixth Day of his house arrest: ” Another day and another Police officer who makes sure that the Opposition is behind bars in their own homes”

Another day and another Police officer who makes sure that the Opposition is behind bars in their own homes. Just as there are men blocking all enterance to Kasangati, the same is happening at the home of Lord Mayor Lukwago. So now the men are continuing to block his road and his house. The House-Arrest is real and the Opposition figure is not allowed to have the liberty of normal movement. Here is what he was saying about the state of affair on the road at the gate of his home.

Lukwago’s Statement on the Sixth Day:

“DAY 6 OF HOUSE ARREST. We have a Luganda proverb that; ‘‘agamyuka akasolo gegamyuka n’omutezi”(a hunter suffers the same way as the prey ). After enduring a chilly breeze of the night, the poor policemen(am glad there isn’t a single policewoman) get drenched in the heavy early morning down pour. Their misery evokes sympathy but I can’t help much. But all this for what? ???” (Lukwago, 10.05.2016).

The Late-Night Situation on the Outside of Lord Mayor Lukwago Gates on the 5th Night of the House-Arrest! 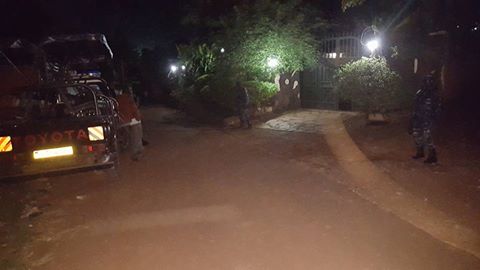 “The situation at the entrance to my residence right now. Why subject these poor policemen to such horrendous, inhuman and degrading treatment!!??” (Lukwago, 09.05.2016).

Here we see how the State treats the loyal Police officers as they guard the “criminal” Lord Mayor Luwago on the 5th evening of the House-arrest. They have just the car and have no place to-go to their needed duties and have places to eat. So the Police Officer’s that are doing the duty that IGP Kayihura on orders from “above high” as they all are “honouring” the Interim order of  29th April  2016.

So when a government can first take a man illegally detained in his own home over the time of the laws in the country, then it by all means should also care for the caretakers that are put in place to secure the facilitation of the ruler in the land. They wouldn’t be sitting there for hour upon hour if it wasn’t for the President. The President want to silence the Opposition and therefore house-arrest the Opposition or detain them. Peace.

Lord Mayor Lukwago are house-arrested on the 5th Day as the Impunity of the NRM-Regime continues! 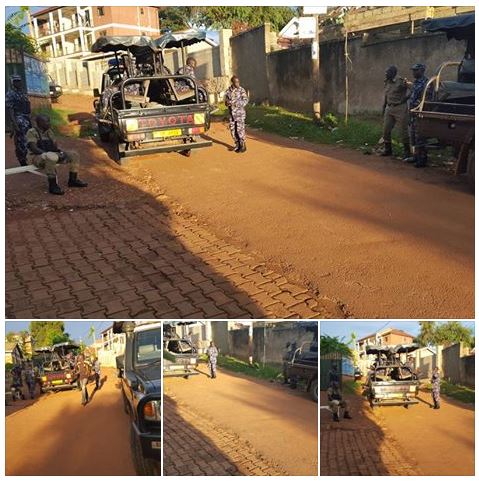 Here is more new on the House Arrest of Lord Mayor Erias Lukwago. They continue with their impunity towards him and the greater FDC. As he is house-arrested in his home. This is just making the NRM regime looks like mockerty of a legitimate government. Because to keep themselves in power they have to keep fellow citizens under arrest.

Here is the words of Erias Lukwago:

“DAY 5 OF HOUSE ARREST. More troops have been deployed at the entrance to my home and they have improvised a seating facility in form of a newly made bench, which is being used as a check Point. I humbly appeal to Gen. Kayihura to be considerate enough to provide them with a mobile toilet. Otherwise, the situation is really dehumanising, not only to my family and the community around, but even the innocent police officers themselves. Ironically, I have just received information from our Law firm in Kamwokya that a card inviting me to the Thursday swearing ceremony, in the capacity of Lord Mayor-elect, has been deposited there” (Lukwago, 09.05.2016). 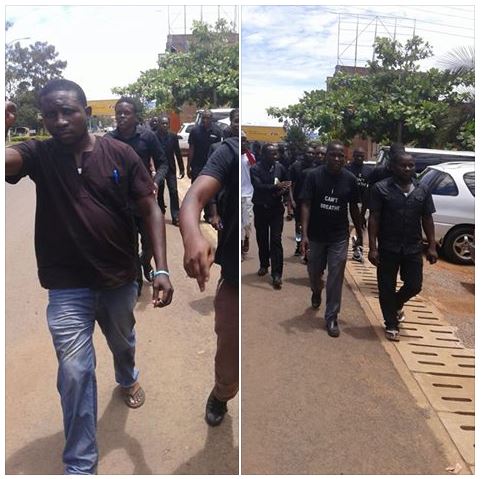 As the FDC Leader Dr. Kizza Besigye got detained the reaction sparked instantly in the FDC branch in Entebbe, where a group of FDC supporters went to walk-around the State House in silent demonstration against the oppression of their party.

This was not something the NRM-Regime could accept, this defying spirit and peaceful demonstration around the premises of state property, so the FDC supporters who was walking along the sides of State House, was finally taken by the Special Force Command and detained as well. 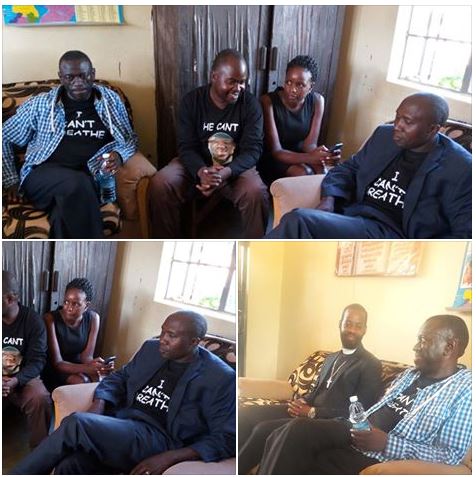 Also later in the day the FDC Officials went to Naggalama Police Station in Mukono to visit the detained leader: 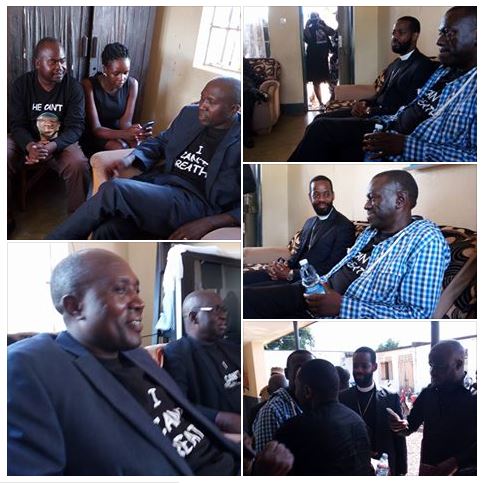 There are more people there with him from the FDC, like  Susan Norma, Ingrid Turinawe and more where they are getting Past Ngabo to pray for Besigye! 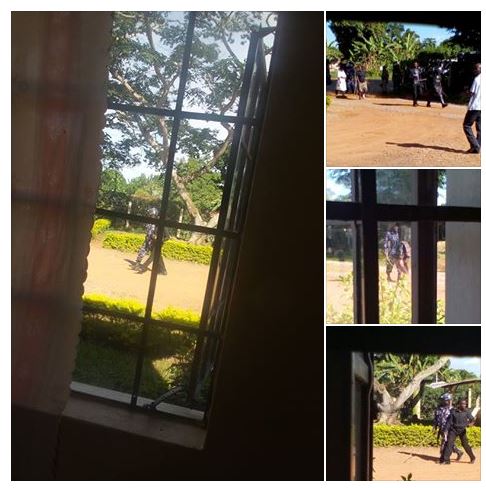 “KB supporters terribly beaten and arrested here at Nagalama police station, the bodabodas that were transporting them have been arrested 2!” (Doreen Nyajura, 2016).

Also been said about actions there:

“Police are scared and firing bullets in Nagalama now. The people have had enough of the police criminality, we have to confront these goons. They have arrested even Mr. Ajuna the FDC candidate Fort Portal municipality as if he is a petty criminal” (Moses Atocon Atyeko, 2016)

There will come more, as it evolves and as the Government of Uganda, and the Police continues to stifle and undermined the opposition in Uganda. Peace.

“in spite of Gen. Kale Kayihura’s directive, the police are still deployed at Dr. Kizza Be-sigye’s home. Kasangati DPC James Kawalya said he was yet to receive an official or-der to withdraw. Besigye’s lawyer David Mpanga said they will continue to pursue the case requesting the police to leave his client’s home” (NTV Uganda, 2016).