A teddy bear, a son of a dictator, a soft-core actor and a boxer. What do these all have in common? Well, they are now a part of the final stages to the polls in the Philippines. The stage is now getting set and COMELEC is preparing things. The final preparations are in order and the last part of the campaigns are happening too.

Now, the ones who haven’t made up their mind …. they got and should. The teams are already there. The Front-Runners have been clear for month. Two candidates have run high and mighty. This being Ferdinand “Bong Bong” Marcos Junior and Leni Robredo. They are stark contrasts and very different.

Former Senator BBM or Bong Bong isn’t very transparent or accountable. No, he is very selective and defensive. Not the sort of fella that you can interview or question. By any means… he prefers prefixed questionaries and puff pieces. The sort of man who is arrogant and entitled to return to the Presidential Palace like his father did in the past. The son of the dictator who has never supported or been part of EDSA. You can wonder if he will do that in office or dismiss it. As he remembers that as the time the Republic fought his father’s tyrannical reign and the agony of the marshal law. Alas, the son might be different, but he shows utter arrogance that would linger in office.

While Vice-President Leni Robredo is open, participating and answering. You might not agree with her or every political stance she has. However, everything isn’t scripted prepared or even published as fluff. No, she is pushed, dragged and belittle all over. Not just for the colour scheme of her campaign, but for whatever she does. She has even been asked to sacrifice her candidacy for others. Therefore, Robredo has stood tall.

Francisco “Isko” Moreno Domagoso, the mayor of Manila has created a storm and been in the wind. His campaign has never taken off and neither has his Duterte-Light approach to the campaign either. Isko is just one of those guys. He is the man who asked Robredo to sacrifice her role and called her a “bully” for standing tall. That just shows how he is a brat.

Emmanuel “Manny” Dapidran Pacquiao the senator and well known boxer. A man who has gone up the ranks and become an established politician. Nevertheless, his own party dismissed him and the PDP-Laban threw him out, as he stood for Presidency. While they instead have endorsed “Bong Bong” much later. That just shows how weak the PDP-Laban was into this election. While Manny is far from totally seasoned or had a powerful team behind him. He has fought and sells himself a people’s champ. However, he will not switch to southpaw and win this one. No, this is going down for the count and he is not close to the 3rd position even. Though his doing it by showing his true cadence and character, which is more than “Isko” and “Bong Bong” ever did.

I don’t know how this will go, but my prediction of the whole machinery behind Bong Bong Marcos was justified. That Robredo would be second or a front-runner was expected too. It wasn’t without a reason she was able to become the VP in the first place. So, now the question is… how will these two fare. That is something I don’t know and cannot tell.

What I do know… is that these will be ones to follow. The margins of error is slim. BBM haven’t really tested the waters and he will not do it now. He will continue his onslaught of prepared and prepaid content. While we can wonder what the others will do. Nevertheless, what ever Manny and Isko is doing will become more and more meaningless. It might help their next run or campaigns. But right now? Well… it won’t amount to anything. Not because they are no good, but because their reach aren’t close to BBM or Leni.

They have to fight a cute teddy and a dynasty. These two cannot match that. Neither can anyone of the not mentioned here. Since they are so far from the four mentioned. That I don’t even care to say their names. Even if one is a long standing Senator and other took a noble stance after the Withdrawal Party. Still, the facts remain…

It is a two horse race and we can just wonder who finish first at the finish-line. Peace.

Yesterday, Senator Christopher Lawrence “Bong” Tesoro Go or “Bong Go” stepped down from his candidacy as a Presidential Candidate on the PDP-Laban ticket. Since 15th November 2021 the PDP-Laban had written on their resolution no. 16 to support the candidacy of Bong Go – Duterte tandem ticket. This was supported and stated by the National Executive Committee of the PDP-Laban. Therefore, the Partido Demokratiko Pilipino – Lakas ng Bayan (PDP-Laban) is now without candidates in the highest offices.

The President has announced during November that he suddenly would be a candidate for the Senate. Meaning he will not stand as a Vice-President and compete with his daughter Sara Duterte who is standing on another ticket as a VP. Therefore, “Bong Go” and Rodrigo have both backed off and ditched the main tickets of the PDP-Laban ticket.

Yes, this is also following the Ronald “Bato” Del Rosa who first stood as the Presidential Candidate, because he was available and that got changed to “Bong Go”. Now, all three is gone and the PDP-Laban is a lot of wasted space.

The PDP-Laban could just have fielded Manny Pacquiao, but they rather run with none or run on empty. They practically don’t have an VP or a Presidential Candidate for 2022 at this late stage. Yes, COMELEC have no official withdrawal letter from “Bong Go” so it’s not official, but the message is already out.

PDP-Laban is total chaos with this… Just the announcing of “Bato” and dropping him for “Bong Go”. Rodrigo Duterte went from VP to be come a senator. While the PDP-Laban lost Pac-Man as well, who is running on another ticket. This is all showing how the party have done it and it have been hectic.

If this is all done to support Bong Bong Marcos – Duterte ticket. It is really foolish of them, if that is the end game. Because, what worth is the party? If they can easily trade it all away for political alliances and family members who is participating for others? Is the PDP-Laban party that easily traded away?

Because, Inday Sara is running elsewhere… the PDP-Laban have to be crucified on the national level? That’s how it looks like and it’s just weak tea. Who knew they lacked so much character and finesse to give up in this way.

Not like “Bato” or “Bong Go” was any good as Presidential Candidates. They are both side-kicks and loyal token soldiers of Duterte. These two doesn’t have the spine to stand-up for themselves. This is why they can be so easily shelved and not mattering. It is tragic that they make “Isko Moreno” look smart… which isn’t supposed to be a thing. However, that is what they are up to and it’s not looking good.

Who knew the PDP-Laban would be this sort of circus and be this chaotic…. This is supposed to be the parties who supposed to run a republic and have certain measures to secure things runs in order. PDP-Laban should be run better, but that is clearly to much to ask…

“Bong Go” dropping out is just showing why he was the side-kick and the water-boy of Duterte all these years. His the enforcer and the ones who deals with the decrees of the President. He isn’t a man to carry his own. That is why it’s right for him to back-off. However, why was the party believing in this man in the first place?

That just shows the foolishness … and how dumb this process has been. There is nothing in this that you can take as a smooth or a wise move. Unless, it is to strategically give BBM-Duterte an easier way into 2022. If that is the case… the trade-off better be golden and the treasury chest promised should cover all expenses for decades to come. Since, the “Bong Bong” Marcos still has plunder money to pay for his politicking. Peace. 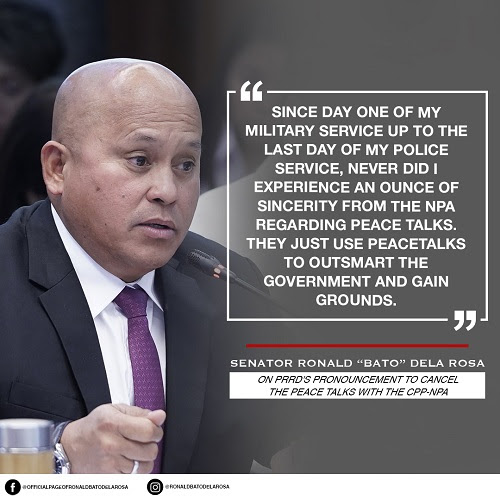 ““He [Dela Rosa] is the one who is available. We’re not saying he is the best because originally we were pushing for Senator Bong Go,” PDP-Laban Secretary General Melvin Matibag said in an interview over ABS CBN News Channel when asked if Dela Rosa is the best candidate the party has to offer as president” (Daphne Galvez – ‘PDP- Laban Cusi wing: ‘Bato’ not best presidential bet, but he’s available’ 11.10.2021, Philippine Daily Inquirer).

The Partido Demokratiko Pilipino–Lakas ng Bayan (PDP-Laban) Cursi-Faction seems to have had a bad transfer video. They are clearly not selling Senator Ronald “Bato” Del Rosa well. The PDP-Laban Cursi-Faction had another idea and the party had in August made another ticket.

However, they ditched that. As “Bong Go” became the VP candidate, instead of being the Presidential Candidate. This maybe why things got confused and the incumbent was retiring instead of standing as VP. Has also made the utter chaos inevitable.

“Bato” isn’t a winning man. He is a useful man for the PDP-Laban. A loyal man and someone who is fighting the same causes as Rodrigo Duterte. This is why Duterte has vouched for him to stand as a President too. Nevertheless, the proof of here.

“Bato” was the last choice and not the one they intended to field. The PDP-Laban is showing that they are not sending their best. They are sending the “free-transfer” and the one “available”. Not the candidate who has the ability or the heart to be there. Neither the person who has the popularity or charisma to takeover from Duterte.

So, when the PDP-Laban says this man isn’t the best and the only one who swiped right on Tinder. Why should the people pick up the ballot and vote for this man in 2022?

Heck, this is the last effort to have a full squad. His the last draft-pick and the “lucky loser” who just happened to be there. “Bato” isn’t even cutting it. That is apparent, when a spokesperson describes it like that.

Interviewer: “Well, why did you marry “Bato” Mrs. Del Rosa?”

Mrs. Del Rosa: “He was the only one man on the island, I had no other option”

Mrs. Del Rosa: “Yeah, what can a girl do? You are alone on the island and he is the only man there. He had to be the one for me”

The same apparently happened within in the PDP-Laban party. That is not a sign of strength, character or skills. It is the last ditch effort to pitch someone to stand as a President. At this point, the PDP-Laban should have reconciled with Emmanuel “Manny” Pacquiao. Since the Pac-Man or Pacquiao at least would look like a sincere effort. Now, they look clueless and panicky.

Yes, “Bato” got 19 million votes as a Senator in 2019. However, he is contesting in different race now and with other prospects. Why does he thin “soldiering on” is enough to become the Head of State? Is that how unserious the PDP-Laban has become.

The one who wasn’t worthy of a proper transfer, but could be picked up as Bosman player was fine and dandy. Well, that says more about the lack of coordination and planning in the final stages for the PDP-Laban. Which also makes things look ugly for “Bato”.

He looks stupid and also sounds unwanted. While his supposed to aspire for the highest office of the Republic. Peace.