Archive for the tag “David Mukeba”

Today there we’re planned marches from the Opposition in Lubumbashi, Kisangani, Bukavo, Goma and Kinshasa after what I perceived information and the reports today are startling.

As there were planned demonstrations in the capital Kinshasa, there was calm in the morning, but there we’re many closed stores and police we’re in the streets. Also less traffic than normal as well. The youth of the UDPS with its head David Mukeba was the first line to the front of the demonstrations at one point, so UPDS Youth was not following party-line and participating in the demonstrations. At one point the Police barricaded the Martyr’s Stadium. At the MLC Headquarters the Police threw tear-gas at the demonstrators there. This was even said on the Police action: As they walked on the proposed route, the protesters still had to retreat. “Even on the route imposed yesterday, they charge” (…)“We respected the line established by agreement Tuesday”. This proves that the agreements made the ones behind the Demonstrations and the Authorities, the Big-Men change their mind and then the Police starting to use fear and intimidation against the people on the streets of Kinshasa. What is shocking: “that Congresswoman Maman Eve Bazaiba Masudi has just been shot in the leg”. She wa apart of the Demonstration in Kinshasa today!

What the Police have said about the Demonstrations in Kinshasa:

“Police talks about 2,000 demonstrators in Kinshasa. 35 police injured in the capital. The spokesman said no trace respected.Police said an accident caused the death of a civilian. Also there we’re 6 serious injuries, but No Police officer shot”. “They promised a peaceful protest and we found ourselves facing the rioters ,” said the police spokesman.

The planned demonstrations in Lubumbashi did not happen as the people we’re scared as the Police was already in the streets, and the demonstrators was not organized as their leadership was disorganized by the authorities.

In Kisangani the town was totally silent after the Police and Authorities didn’t allow the Opposition to demonstrate in town. There been reported that their been arrest in town, but no accurate number. 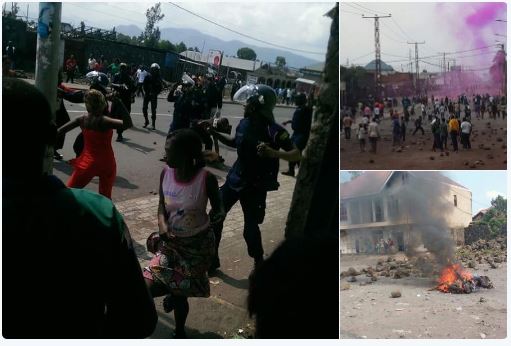 While in Bukavo there we’re demonstration that the Police tried to disperse as several of demonstrators are arrested and even some are hurt by the Police brutality in town.

In Butembo in North Kivu where there also we’re demonstrations there are released pictures of a demonstrator who was killed by Security Forces during the demonstration in town. In the town while the Police dispersed the public, are truck hit a motorcycle and arrest 4 students and 1 UNC member.

In Bunia there we’re demonstrations, as everywhere else, the Police Brutality we’re there and they used force to disperse the demonstrators. They got 30 minutes to march in the town before the Police starting doing their thing.

So today the People where it was possible and as long as they we’re allowed too, they walked asked for change in constitution and justice for the people dying in Beni; while the Authorities with their security organization did what they could to disperse, detain and even at some points even taking lives. There been showing their true face and little dignity towards the citizens and protestors. They also protest against the breach of constitution if the current President Kabila wishes to go for a third term, which is most likely; as there haven’t been since independence any peaceful change of Head of State or the President. They have been sitting in power until somebody came with enough guns to punch the clock and take the salary; then they either go into exile or the casket. Therefore the next election is important. Peace.