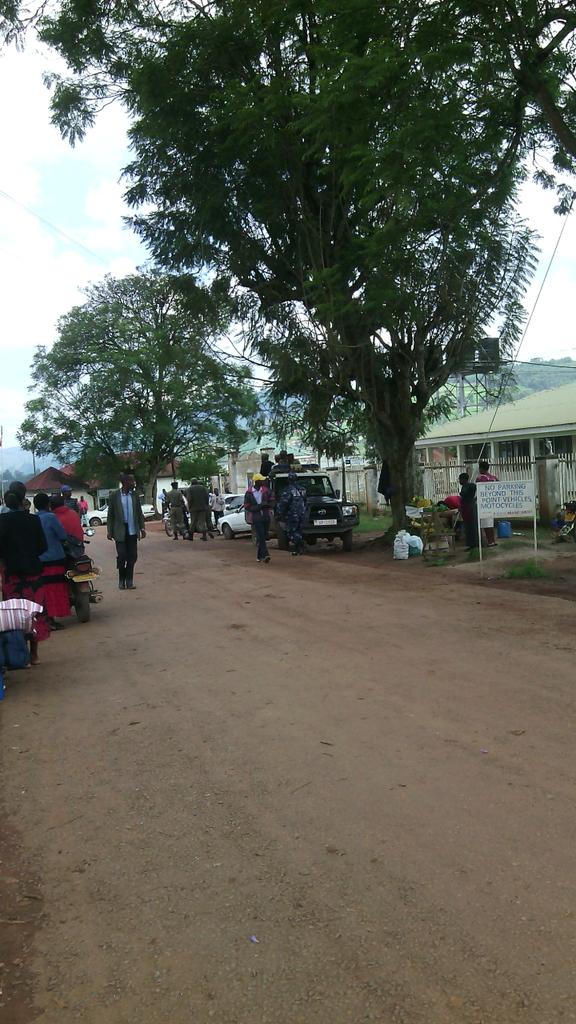 In the last ten days there been various reports on how the NRM is staging and making it harder for the Go-Forward/TDA Presidential Candidate Amama Mbabazi. We should by now the history that Amama Mbabazi has in the NRM and he is now contesting against his former ally Yoweri Kaguta Museveni, the President since 1986. Feels writing that is just a boring repeat, but doing it incased you have missed it.

We are now in the middle of the campaign trails for all the presidential candidates. Some are more in the shades and other are in the spot light. Amama Mbabazi is one out of three who the main ones are; the others are Yoweri Kaguta Museveni and Dr. Kizza Besigye. We all know that these three has history between them. But that is not what this piece about.

This piece is a timeline of actions and reports that has surfaced from the Campaign trail. There is visible bad blood between NRM and Go-Forward. It’s like the NRM and their regime fears the knowledge of Amama Mbabazi. Therefor it starts with clashes between NRM supporters and Go-Forward agents clearing the venue for a rally. There been other questionable actions that have been agents of NRM paying and ordering police to close of areas where the Go-Forward camp was supposed to hold their rallies.

At the 5th December events during the campaign trail of Amama Mbabazi who is the TDA and Go-Forward Joint Candidate his security agents who were going to venue was maliciously attacked by NRM supporters, if that wasn’t enough election violence the police of the area stepped in support of the NRM supporters. So there were serious clashes.

At the same venue in Iganga to prove their loyalty to Amama Mbabazi there was NAADS secretariat that has deflected from NRM to Go-Forward. There initial movement indeed.

On the 6th December NRM members deflects to Go-Forward:

“Amama Mbabazi has today received a number of NRM membership cards from supporters in Buzaya, Kamuli who say have defected from the ruling party to back his ‘Go Forward’ campaign” (NBS TV, 06.12.2015).

“Some of Gen. Henry Tumukunde’s operations to sabotage Mbabazi’s campaigns could be scaled back in December, especially as hints increase that he and others using strong-arm tactics could be listed for prosecution by the International Criminal Court or at least subjected to travel bans by certain western countries sympathetic to Mbabazi” (Kampala Express, 07.12.2015).

“President Museveni has lashed out former premier Amama Mbabazi, saying that he no longer has power over the ruling party” (WBS TV, 08.12.2015).

10th December reports from Amama Mbabazi camp was this:

“The Go Forward campaign team of independent presidential candidate Amama Mbabazi has asked the Electoral Commission (EC) to exercise its mandate and stop individuals and groups who disrupt his campaigns” (Daily Monitor, 10.12.2015).

10th December there was reports coming in that the local RDC in Kabale was paid to pay people not go to the Go-Forward Campaign in the area. The local police was going into the villages and doors to door paying the locals not to go. This money came from the NRM campaign fund and initially paid through the NRM chief Henry Tumukunde who was in charge of this smear campaign.

“Hope Mwesigye, the Coordinator of the Go Forward campaign team in Kabale says the posters were pulled down on the orders of the Resident District Commissioner, Darius Nandinda” (88,2 Sanyu FM, 10.12.2015).

11th December this happened around the trail of Amama Mbabazi:

“Police deploy heavily at Kabale Hospital following reports that presidential candidate Amama Mbabazi is planning to visit it today. Area police insist Mbabazi has no permission to visit the health facility. The hospital gate is closed but patients are being allowed to access premises” (NBS TV, 11.12.2015).

Some more reports on the 11th:

“Shortly after Mbabazi’s arrival, the Police Officers on duty ordered for the closure of the Hospital gate and drove off leaving behind unarmed men. Mbabazi walked to the gate but couldn’t get through since it was locked” (Elgon FM 101,4, 11.12.2015).

Third report on the 11th:

“At The Hospital.NBS TV Reporter Bahati Remmy Was Locked Up By Police In One Of The Hospital Rooms For Some Good Time But Later Released (Greenfield Radio, 11.12.2015).

Fourth Report on the 11th:

“Mbabazi started his campaigns in Kabale district yesterday and addressed several rallies in the counties of Rukiga Ndorwa and Kabale municipality where he also threatened to deal with the Kabale deputy resident district commissioner Denis Nzeirwe for blocking his supporters from attending his rallies” (93,3 KFM, 11.12.2015).

Justine Kasule Lumumba said this: “independent presidential candidate Amama Mbabazi cannot perform because he will have no members of parliament in his government.

Addressing NRM Mukono district flag bearers at Mukono Boarding Primary School, Lumumba has scoffed at some of the presidential candidates who say they will sell off government assets like a presidential jet and cut the state house budget to reduce government expenditure, saying this can only be done through parliament’s approval. She has also threatened to expel historicals like General Kahinda Otafire who have chosen to go independent if they do not abide by the party regulations. At the same meeting Lumumba denied media reports that she received 800 billion from the party for the campaign programs. She says “that is not true because many of her staff have not been paid and many party district offices have had issues with rent since August” (93,3 KFM, 11.12.2015).

This here just proves that NRM can’t handle proper campaigning of opposition. They don’t things to Joseph Mabirizi or Gen. Benon Biraaro because they are so far off as real contenders this coming 2016. There is different with Amama Mbabazi and Dr. Kizza Besigye.

Amama Mbabazi seems to be the villain for Mzee. Therefore he has to do everything in his power to destroy his campaign trail and make it harder to “set up shop”. NRM really fear Amama Mbabazi and it shows. That is why the Mzee and his party try at every turn to discredit or maneuver in a way that supposed to make it worse for the Go-Forward camp. Instead the aftermath of it makes them look like silly! NRM and President Museveni is not showing their democratic behavior if they have any when they pay locals to not attend and threaten them with police going door to door to keep them away from the venues. That is just wrong. The reports is not the usual that NRM pays for people attending their shows or paying boda-boda drivers to drive people to their venues of where Museveni campaigns, that is the norm after all these years. The thing that is bugging is that their paying people not to attend other candidates rallies and also does what they can to stop it, by forcing Regional District Commanders to shut down or walk door to door to stop people from going. That is not a good sign and also a breach of trust and work that the Police is supposed to do. But we all know by now how the UPF is an arm of the NRM. If you don’t then do some research!

The reports on how they act towards the Amama Mbabazi campaign trail and his Go-Forward is foul. Nothing more and nothing less.