“I believe the candidates conceding have received their results, this is a very transparent process” – Wafula Chebukati (10.08.2022).

The happenings since the polls of the 2022 elections in Kenya is just positive. Yes, there been misgivings, some candidates who has acted out and should be punished for it. However, the bigger picture is a good one. The candidates, incumbents and whatnot has been showing restraint, but also just been sincere.

This could have gone either, which way. The representatives could have acted all out after losses. Career politicians could gone on a rampage and been violent. However, they have instead conceded and showed a peaceful manner of transition. The Governors, MCAs, MPs or Senators has all taken into account the will of the people and seen it wasn’t their time. That should be commended. Because, these has been in the spotlight and been able to win before. However, this time around they are either silent or conceding with honour.

There are giants and big-men who has fallen prey in this elections. People who are part of dynasties and the long time serving politicians. It has been people who are associated with former political rising parties and now losing out. This is all happening and the people has chosen another path this time around.

We are seeing Moses Kuria, Gideon Moi, Jeremiah Kioni, Amos Kimunya, Alfred Keter, Nixon Korir and William Chepkut all losing their seats. They wasn’t able to win their campaigns and other took it. This is why they will not be Governors, MPs or Senators. They will go back to become private citizens and outside of representing government at various stages. That shows something about this election.

We don’t know who will be the winner or get the huge benefit across the Republic. We can only speculate, but the results of the Presidential and the total picture across the political landscape isn’t yet clear. The Kenya Kwanza Alliance and Azimio la Umoja – One Kenya Alliance will both work to look the best and confident, as the balance sheet is not filled out just yet.

This anxious awaiting the tally and pronounced results can be hectic for anyone. The unknown, but hopefully the elections locally will come out. The map of parties and alliance winners will be more clear. As we are awaiting the full verdict of the announcement of the Presidential elections. Because, all eyes goes there and both sides are trying to make seem like they are winning.

Time will really tell. What we do know is that the public is awaiting the results. The leaders themselves wants to know and the new leadership is on the horizon. The current administration is turning over to a new one, no matter what. Kenyatta’s two terms are over, but we don’t know who his turning over too.

The public did their duty and now the machine has to ensure and safeguard the results. That is what is clear. We can just eagerly await and hope for a better tomorrow. The era of Jubilee and Kenyatta is soon over. There will be another day, a day we don’t know. If it is Blue or Yellow. We clearly don’t know yet. It will be either, because the two other candidates has no chance and they can just reside at home. They are going nowhere. Peace. 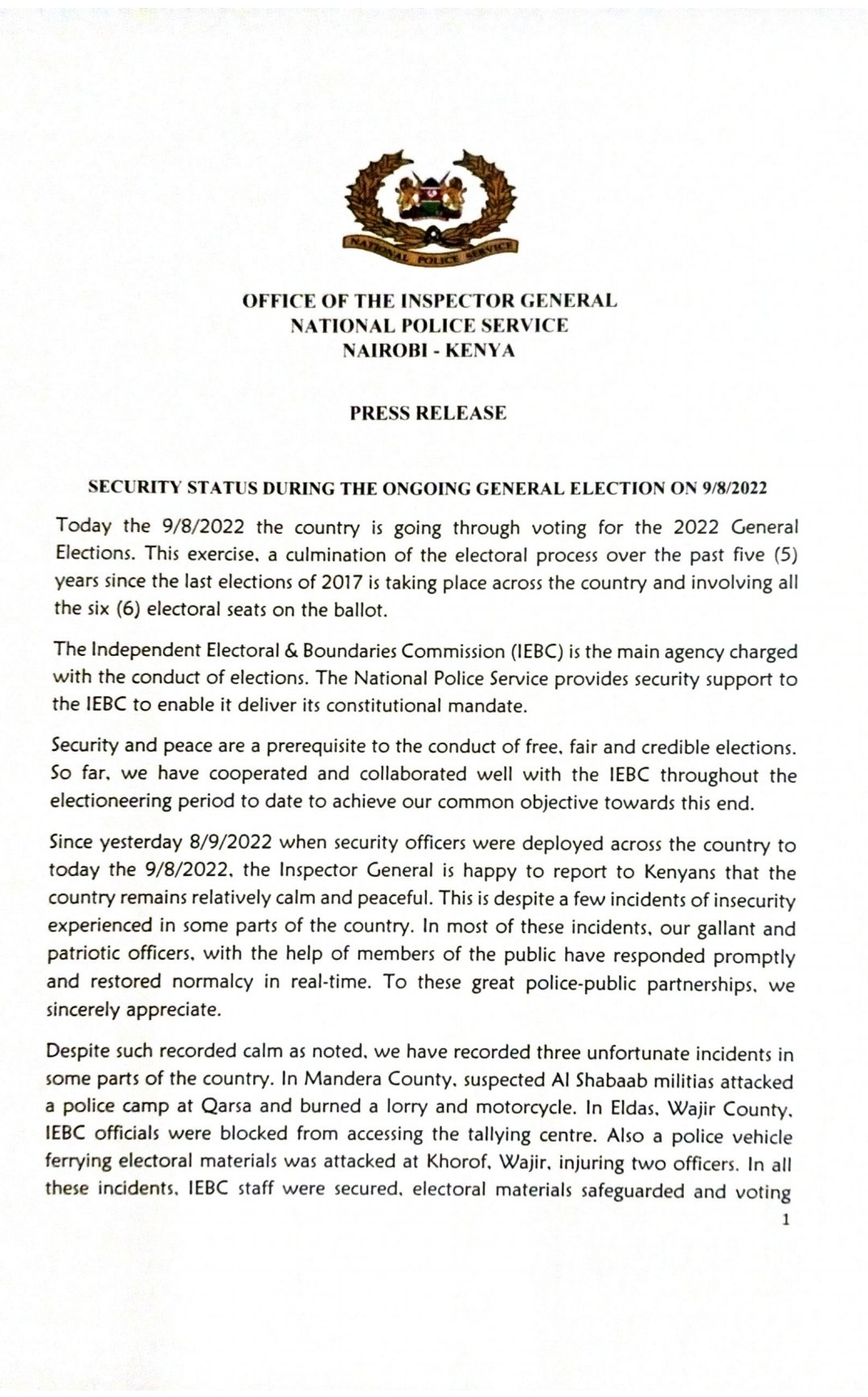 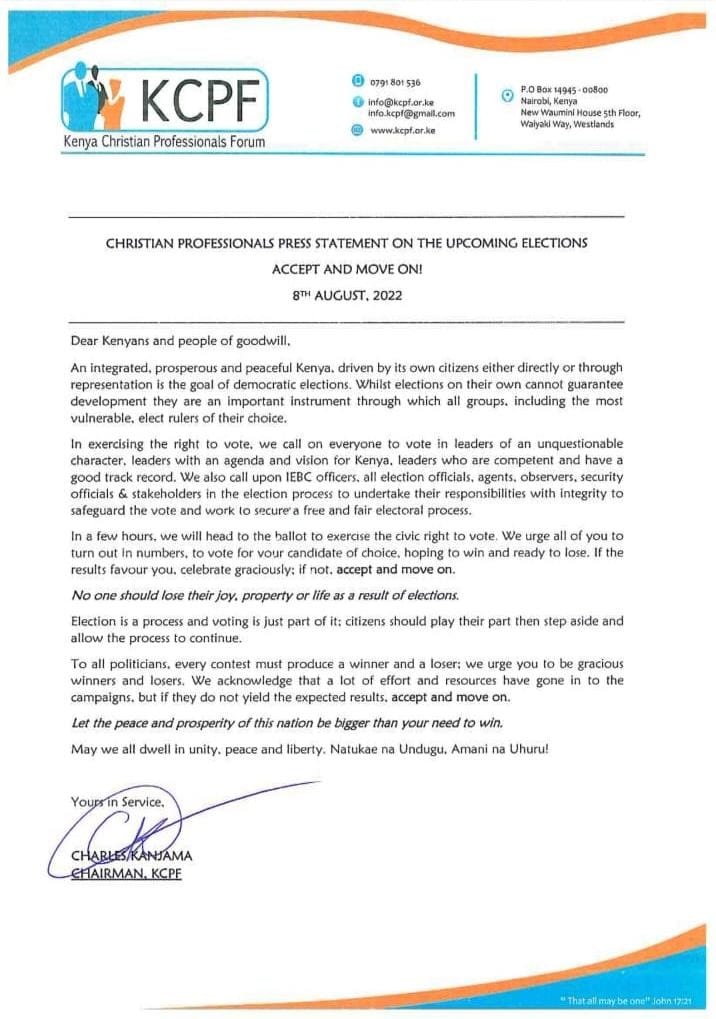 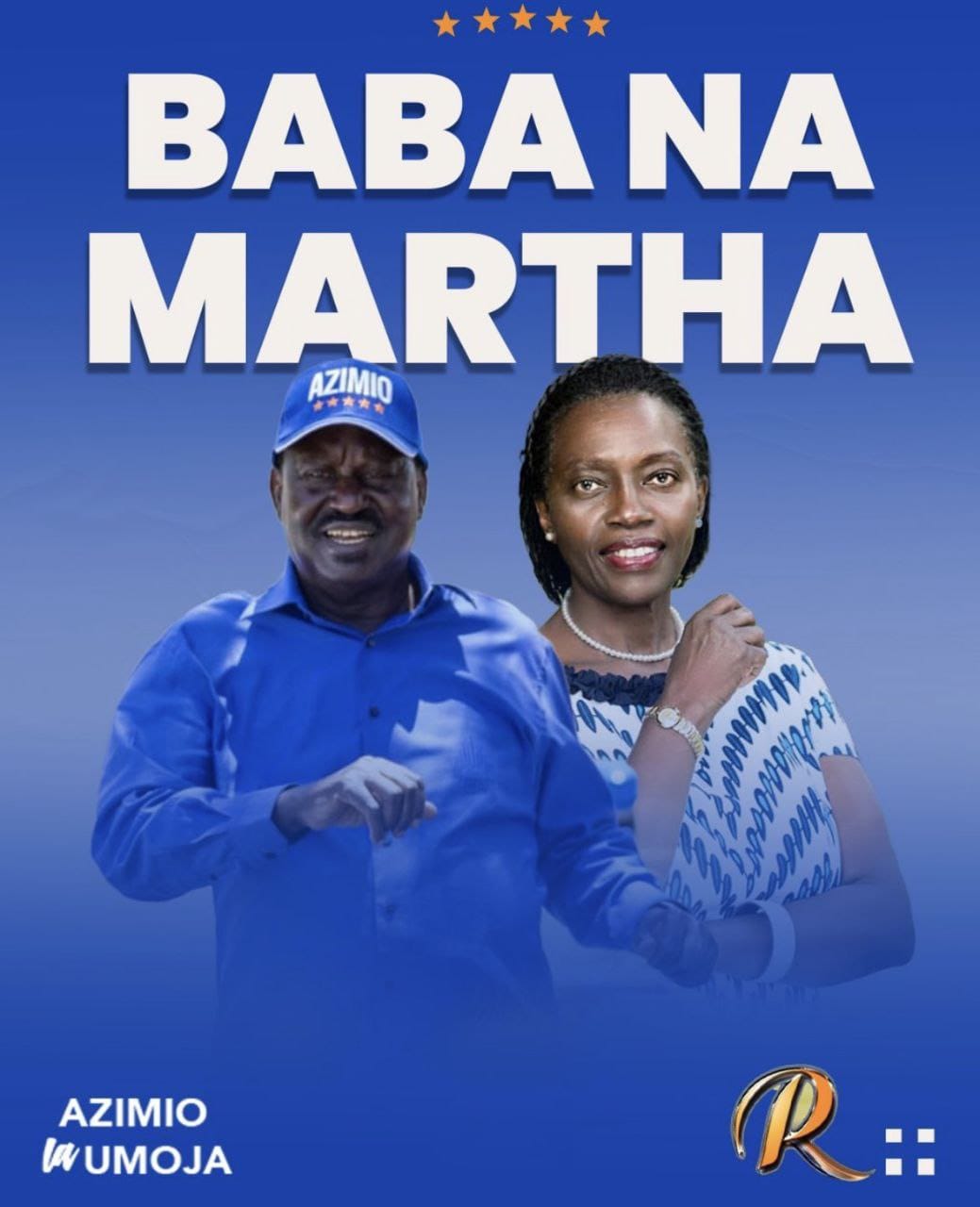 The Azimio la Umoja – One Kenya Alliance Presidential Candidate Raila Odinga is scheduled to win and do it comfortably this time around. This isn’t the first election or campaigns for Odinga. He has challenged for the title and the office for decades and it’s finally seems like ending there. Odinga needed to become the old man and a “baba” to be there. Because, now he has amassed the political capital and relations to ensure him victory.

While his far from alone in the race, the main competition is the current Deputy President and career politician William Ruto. The man who has went from two periods in the docket of the Deputy and being part of the government to become outcast and a direct opposition. The United Democratic Alliance (UDA) and Kenya Kwanza Alliance Presidential Candidate doesn’t have it solidified just yet. We know his team will boost his numbers, but being outside the machinery will show a hard time for him.

While the two other candidates which has been recognized and acknowledged in this race is David Mwaure and Professor George Wajackoyah. Mwaure is the Minister and Lawyer, the leader of the Agano Party Presidential Candidate. While Prof Wajackoyah is a Priest, Lawyer, Educationist and the leader of the Roots Party. These two has no real chance and is only fillers on the ballots. However, the last mentioned has caused more headlines and promises of unpractical exports and possibly a “high-life” for the ones voting for him. So, the populism is existing even among the candidates with little to no traction normally.

Alas… here is the case and no one should be shocked by this. The state-machinery and everything involved with the current status-quo is working on overtime to get Odinga elected. That’s the current President travels and rallies for Odinga now. The man he tear-gassed and killed his supporters in previous elections. Kenyatta has used all tricks against Odinga in past elections. So, seeing him backing everything behind him and being the “kingmaker”. Really shows that in politics, enemies are only temporary. Later they can become your allies, which in this case very true.

While a former ally and associate. Someone who worked close and went along with the Jubilee Coalition and the new formation of the Jubilee Party ahead of the 2017 elections. Ruto is without the backing or support of the state now. His not with powerful allies who can conquer or use the authorities on his side. That’s why his more eager and less arrogant in his manner. Even made a video trying to appeal to people after the debate. He cannot trust on Cambridge Analytica tactics either. The DP don’t have that and seemingly cannot spread his messages on social media like last time.

That’s why Odinga is more confident and relaxed about the situation. It’s the feeling that it’s already in the bag and he can finally take the W. While Ruto is anticipated to take the L. This is just the assumption and how it’s perceived. The electorate might feel otherwise, but all headlines and the general feeling is there. Unless, the Azimio camp suddenly breaks out of character and dissolve completely. Which would be weird… since it seems so calculated.

In a weeks time the polls are and the Independent Electoral and Boundaries Commission (IEBC) better deliver credible and fair elections. Though people are afraid of that and the recent arrests of foreign “agent” or “contractors” has put that into jeopardy last month. People are wondering if the IEBC is put to it or even ready.

Last time the Odinga coalition, NASA was able to nullify and call for Fresh Presidential Elections. However, he lost for a second time there. Even if the then opposition claimed it was rigged and was malpractice, which launched Kenyatta into a second term. Now in 2022… years after the Handshake and the works of the Building Bridges Initiative for National Unity. We can just await the polls and see if Odinga finally crosses river Jordan into Canaan.

Time will tell and only in about a weeks time we will know. Usually, the IEBC uses most of the scheduled time to announce the winner and doesn’t do quickly after the polls. It is a tense time awaiting the final results. However, if the writing on the wall is right. Than it’s Odinga’s turn to reign and be in office.

Nevertheless, we can never know and there could be surprise. Maybe the hustler and his wheelbarrows was able to trick it all. I doubt that and I think Ruto knows this as well. The two other mentioned candidates are ballot fillers at this point. They are the Thirdway Alliance of this election and will not amount to anything sincere. Though the Professor has caused some controversy and also laughs online.

Well… that’s about it. I would be amazed if Baba isn’t announced during the end of next week. However, the year 2022 is a year of weird things and erratic behaviours. So, God knows and we don’t. We are just mere mortals awaiting another day. Peace.

So, it is sort of special after everything, as it seemingly looked like both Ruto and Raila Odinga would both drop out. That only one of them did. Maybe, the Azimio la Umoja – One Kenya Alliance is so sure of victory. In such a manner, that they thought it was clever to sit this one out and not show up. In this regard, Odinga is actually doing like Museveni did to the first Presidential Debate in 2016 and this is not a good look. He should have showed up.

Yes, Ruto failed on questions and showed that he has a tendency of lying. That is a character trait everyone knows and know his that sort of guy. In that perspective, the old-man and aged politician in Odinga could have been witty and smart too. He could have shown his finesse and how ready his for the Presidency. Instead his in absentia like Professor George Wajackoyah who also didn’t show up.

That’s why it’s only half of the top 4 who showed up. While the two main contenders, only one did and it was William Ruto. The man who has the most to gain from this and surely he will win votes by showing up. If he didn’t believe it would give him some credibility. He wouldn’t have entered and been there.

What Odinga is showing is a bit of contempt and disregard of the whole campaign season. Here he could have finessed Ruto and played at his game. Instead, his staying at home or not attending. That’s just showing how little he cares. A man who is supposed to be the front-runner and have the whole machinery behind him.

Odinga has no reasons to rest and take it easy. Seemingly he should win on a walk-over this time around. Everything that matters has gone in his favour until now. However, not showing up to the debate. While Ruto did… is bad publicity. Even if Ruto has a lot of own-goals and shown his character flaws.

Still, Odinga didn’t even dare to get out of the program and the self-serving campaign rallies. Which he controls and in a sort of territory he has been for years. To be questioned, tested and even possibly burned by another candidate could have shown who he as a man and a candidate. However, we never got to see that now.

Even with all the failures of Ruto during the Debate. He still carried himself and was there. A place where he could undermine and spell out the grievances towards Odinga. If Odinga had been there… he could have addressed it and undressed him. However, that will never happen and certainly Azimio will have their reasons.

However, what is striking is that Odinga let this one go and boycott. Odinga has boycotted a lot of things over the years. It isn’t the first time he has done that and he could have been a big-man tonight. He could have been juggernaut and proven why Ruto isn’t fit. Nevertheless, that is only fiction and a fever-dream.

Odinga lost even more than Ruto tonight. Yes, Ruto did blunders and shown how he cannot keep his tongue always in order. Still, Odinga did even set foot in the studio or show anything worthwhile. His mute and not participating when it mattered. That’s the gist of it.

Well, there you have it. The Presidential Debates, which has been so up in the air and how it became. Odinga joined Wajackoyah. They are in the same bracket here and nobody would expect that in advance. Peace. 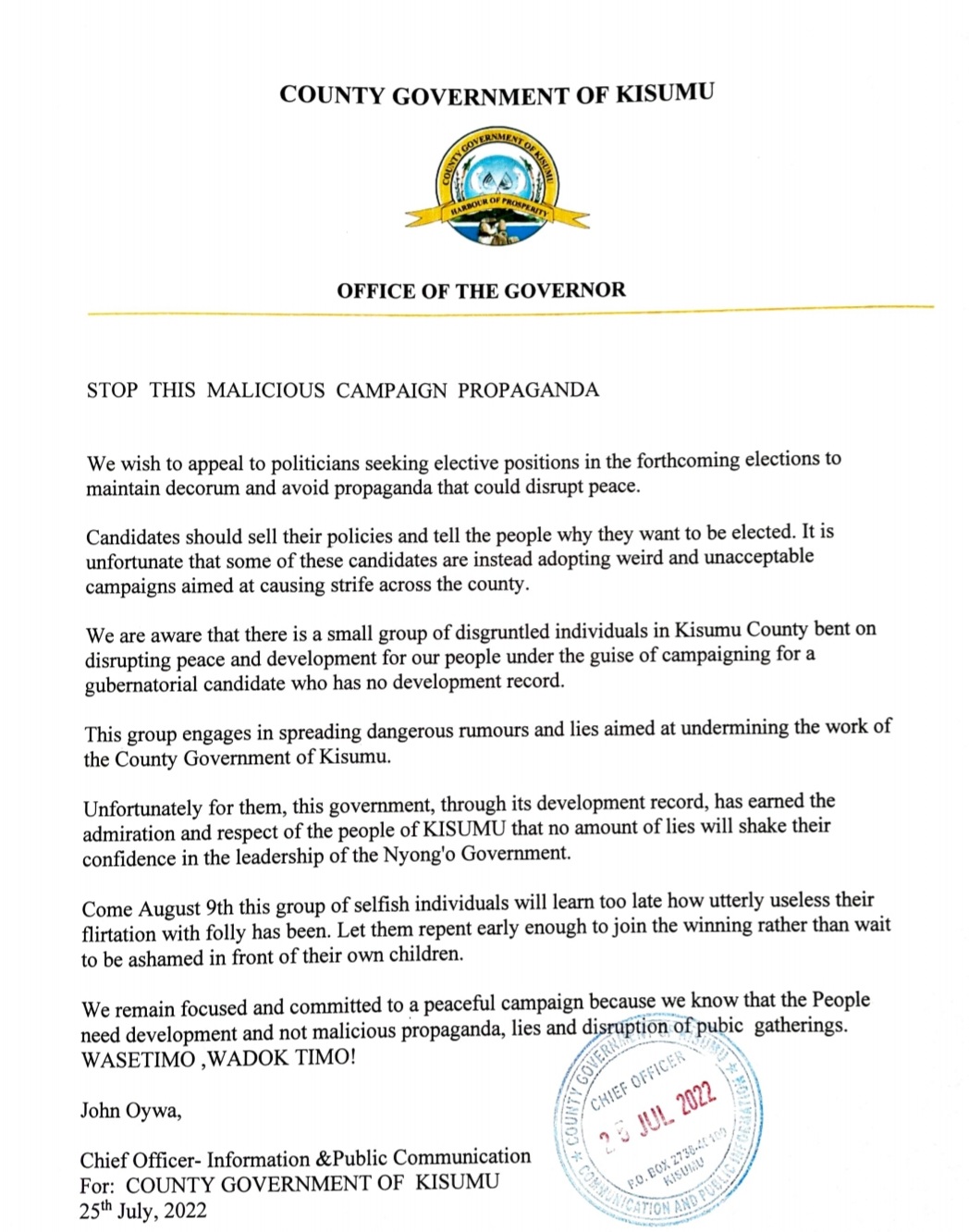