Archive for the tag “Cybercrime Act”

MCC suspends United States Aid to the Tanzanian Gov. on the grounds of the recent Zanzibar election and a draconian law; while the US. Gov. and USAID have no troubles continuing to aide the Ugandan Gov. with their draconian laws and fraudulent election; Double Standard or just me?

A strange action happened from an Agency that is a part of the U.S. Agency for International Development (USAID) the Millennium Challenge Corporation (MCC). They have all of sudden suspended projects in Tanzania after both a so-called draconian law and the recent election on the Island of Zanzibar. Take a quick look!

“A US international development agency has suspended its partnership with Tanzania, citing flawed Zanzibar elections and the draconian Cybercrime Act. The move by the board of directors of Millennium Challenge Corporation (MCC) means that Tanzania will not be receiving an envisioned $472 million in funding for electricity projects” (…)”The US suspension-of-aid notification cites “arrests made during the elections” in Zanzibar as an indication of the Tanzania government having “engaged in a pattern of actions inconsistent with MCC’s eligibility criteria.” (…) “MCC’s model has a partner country’s commitment to democracy and free and fair elections at its core,” the directors’ statement said” (Kelley, 2016).

Why I will discuss this move and the motivation for it. Is because the USAID and MCC have not done anything after the recent election and all of the laws that have enhanced the powers of the Executive and possibility to move around the Parliament for the Government and certain ministries, therefore easily get funding and short-term loans from the Bank of Uganda without permission of the Parliament, Police laws that monitors the Opposition and controls them even more, also the well-known rigging of the General Election, Parliamentary Election and the Presidential Election in February and early March in 2016.

While the United Republic of Tanzania might have stepped on some toes and had issues during the Zanzibar elections, they have not been close to the systematical oppression the Police and Army have had in Uganda. And the USAID and their agencies have not acted upon it or reissue any of the aid initiatives or anything in the Republic of Uganda, but the United Republic of Tanzania get punished straight away for the similar actions. I wonder if the the Public Order Management Act of 2013 is sweeter and nicer; then the Cybercrime Act and that the Cybercrime act is the official Bad-Act of the Tanzanian Government in the opinion of the United States.

I also wonder if the Tanzanian Government had armies in the wars that the United States does not want to touch, not even with the filthy lying lips of Donald Trump. Because the Tanzanian could have oppressed their opposition, made draconian laws and laws who applies in ways that the ministries and the Executive does not need to take the decision through Parliament before acting. That is Uganda and they have no issues with the USAID and the MCC. Only UNRA have had issues with World Bank and the progression of the World Bank funded Infrastructure and road-building have been suspended because of embezzlement and bad management in the Uganda National Roads Authority; who due the diligence on the development projects. Still the Ugandan Government have had no trouble with the government funds and army exercises from the United States, even the American Fire-Helicopter training together with U.S. Army happened in a month time after the Election Day. 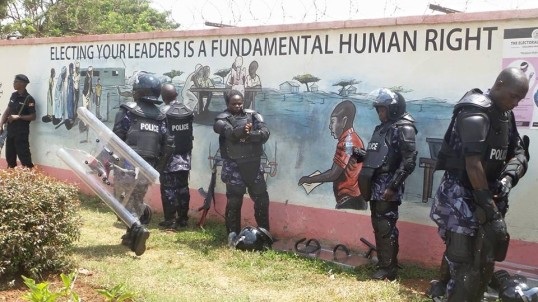 The Double-Standard is too obvious, what is okay for the Ugandan Government is not apparently okay for the Tanzanian Government. That is openly displayed by the United States this time as well.

So I feel there is a theory behind the actions against the Tanzanian government and their actions during the Zanzibar elections, while the Ugandan could walk skootch free with some disregard of the actions in country, but nothing that affects the relationship between Uganda and the Americans. While today the Tanzanian has lost their extra funding for the Projects through the MCC and the USAID operational company. So there is a political factor behind this and the main factor in why the USAID and MCC suspends, but not do the same in Uganda.

The Tanzanian Government does not have army operations or have the close military relationship that Ugandan Government has at the moment. The American are even training in Uganda and the Ugandan army fights wars for them and are likely in the Peacekeepers missions together with buying and getting military equipment from the U.S. even if the Ugandan once in a while buys Anti-Riot Equipment from China and Military equipment from the Russian Federation. Still, the Ugandan has a clearer mission for the American Foreign Affairs and because of that a close ally of Uganda. Something the Tanzanian is not.

Therefore it is easy for the American Government to suspend and punish the Tanzanian. That is why the Ugandan Government have not gotten punished for their lax activity with the former M23 rebels and the allegations of them to be on the payroll of the State House of Uganda, even then the American Government does not questions or punish that behavior. But a few arrests on Zanzibar and the Tanzanian Government get slapped. This while many of the opposition officials have lingered in jail without charges, gone missing and even been in house-arrest for over 40 days in Uganda, without any consequences. That is the double-standard and makes President Museveni Teflon, because he is a necessity for their role in the area. I am not sure why the Americans does this and support him with only remarks in the United Nations and letting go of the European Union comments after the Presidential Elections in the country.

But we have all rights to question the reasons from the Americans as they are supposed to be a moral stature and moral authority; something they cannot be seen in this instance. The Double Moral is staggering. Uganda gets a pass, while Tanzania get suspended its aid. That is the case and cannot be hidden under a rug or be not blasted; especially when we know it happens in such a short time span and under the same administrations in all countries and board-rooms. There are no reasons why Tanzania gets the harsh treatment while the Ugandan walks away with no scratches on their arms. Peace.