The Burundian people are suffering the economic and humanitarian consequences of this situation, and the UN is seeking to increase its efforts to meet the needs of the population.

NEW YORK, United States of America, November 9, 2016 – The Special Adviser to the Secretary-General for Conflict Prevention (including Burundi), Jamal Benomar, briefed the Security Council today on his recent visit to Burundi and the region regarding the implementation of Security Council resolution 2303 [29 July 2016]. Below is his statement following the briefing:

I just briefed the Security Council on the various meetings I held with the Government and other stakeholders during my visit to Burundi, as well as with the facilitator of the EAC-led dialogue, former President Benjamin Mkapa, in Dar es Salaam.

I told the Council that I listened carefully to the views and concerns of the Burundian Government in respect to resolution 2303, particularly regarding the proposed deployment of unarmed UN police officers.

Our discussions were constructive and I’m confident that with continuous engagement and political will, we will find common ground as a basis for moving forward with the implementation of the resolution.

I told the Council that I believe we need a new compact between the Government of Burundi and the international community, with both sides engaging in a constructive effort to promote peace and stability, in full respect of Burundi’s sovereignty.

The Burundian people are suffering the economic and humanitarian consequences of this situation, and the UN is seeking to increase its efforts to meet the needs of the population. But in order to address the many implications of this crisis in the long-term, its root causes must be tackled – a Burundian-led political process and a genuine and inclusive dialogue are urgently needed.

I look forward to continued engagement with the Burundian Government and other stakeholders in order to reach consensus on the steps needed to move the country forward.

Burundi has been in turmoil ever since the current President Pierre Nkurunziza decided that himself we’re more important than the nation he was running. His power and position we’re more the key needed in his equation. Nkurunziza used the Supreme Court and Parliament to get a third term and a second election in his favour as Opposition didn’t even turn out. After that the oppressive behaviour and harassment has been genuine, as the Police and Imbonerakure has been used to assassinate, kill, detain and torture the ones who doesn’t follow the party line of Nkurunziza.

After this the UN has dropped a resolution, had a peace-talks designated from the East African Community (EAC) and H.E. Benjamin Mpaka, but that hasn’t gone anywhere as the little Police Force from the UN is powerless, while the Peace-Talks haven’t even had all parties that needed to compromise as the Nkurunziza party has banned and dislodged them. So the Central Government does what it can to control them by force and intimidation.

Because of these violations and the fear of spreading information and Intel about it the press, the government has a month after the release of the UN Report done this: “A letter signed by Foreign Affairs Minister Alain Aime Nyamitwe said Pablo de Greiff of Colombia, Christof Heyns of South Africa, and Maya Sahli-Fadel of Algeria were no longer welcome in Burundi” (BBC News, 2016). So the Burundian Authorities didn’t like the effect of them there and therefore acted with silencing them like they are doing with civil society and citizens already. Now, not letting people in from the UN and as the UN mandate to make sure the Burundian Government acts righteous towards own citizens, is a crime in the eyes of Burundian Authorities, therefore, I had to look through this report. A government cannot cry that much and cry foul over nothing. Here is what I see as key aspects of it.

Therefor days after the UN Experts released a report on Human Rights violations these we’re the words:

“The UN experts collected unverified information and did not mention sources for their report’s credibility”, deplores Martin Nivyabandi, the Minister of National Solidarity, Gender and Human Rights. He said that the UN experts toured Burundi and saw plenty of positive work but they didn’t mention anywhere the progress observed on the ground. “During their stay in Burundi, the UN experts met different officials of Public institutions involved in the Human Rights, but unfortunately, the report did not take into consideration improvements on the ground. This UN investigation is a political report rather than being technical”, the Minister said” (…) “In a statement issued on 22 September, the ruling party rejects the allegations of the UN report. «CNDD-FDD rejects unverified accusations and dangerously biased contained in that report, apparently the result of a vicious campaign against the regime, the manipulation of public opinion, which is in line with the destructive business”, said Evariste Ndayishimiye, Secretary General of the ruling party. (Uwimana, 2016).

If you would expect that the Burundian Government would have praised a UN Report on Human Rights Violations than you’re a fool. No Government would ever like to slap on the wrist and then answered with sweet words of joy. No, the Burundian Authorities answered the way you should expect that they want the reports and injustices put under rug. They don’t want the systematic repression of citizens by any means.

To start with a Key Ingredient to the Burundian state:

“The citizens of Burundi are not helped by friends and neighbours of Burundi who shield the Government from its national and international human rights obligations.  All countries, but particularly those who have close relations with Burundi, and especially those that have played an historically important role, including in the process leading to the Arusha Agreement, should exercise their good offices, unambiguously, in defence of the human rights of the citizens of Burundi” (UN HRC, P: 23, 2016)

“Several government officials said they were not in a position to provide information, but would do so in writing afterwards. By letter dated 19 July 2016, the experts requested specific questions to the Government, with a follow-up dated 1 September 2016. The last letter also offered technical capacity to document the alleged mass graves. Regrettably, no response was received until the day when the report was completed. The response consisted in a blanket denial of all violations” (UN HRC, P: 4, 2016). 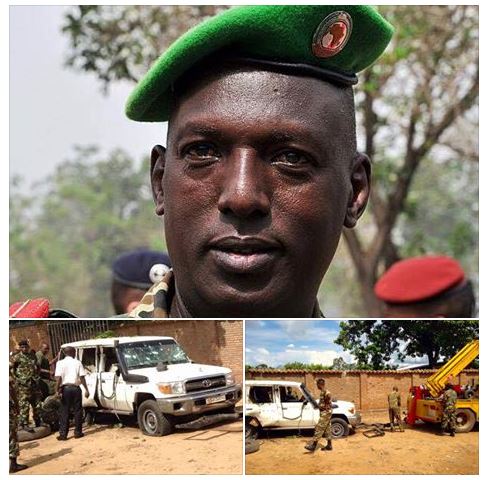 “According to some estimates more than one thousand people have been killed as part of the crisis.  Thousands have reportedly been tortured, unknown numbers of women victims of various forms of sexual crimes, hundreds of people disappeared, and thousands illegally detained” (…) “No official figures of the number of people killed during the crisis are available, and the system of accountability is virtually non-existent. OHCHR has informed UNIIB that, as of 30 August 2016, it has verified 564 cases of executions since 26 April 2015. Given the constraints under which OHCHR operate this is clearly a conservative estimate” (…) “UNIIB received first-hand information confirming the involvement of the Imbonerakure in murders of perceived opposition sympathizers. Thus, a former member of the Imbonerakure testified to UNIIB that he had participated in the killing of 20 individuals in Bujumbura, including two Imbonerakure who had warned persons that there were plans to execute them. The witness added that the Imbonerakure were expected to arrest all those who opposed the third mandate, were against the President, or who did not collaborate with the CNDD-FDD. The bodies of those executed in the cases mentioned were reportedly placed in bags, transported across the Ruzizi River using makeshift boats, and buried in the Democratic Republic of the Congo” (…) “Allegations of mass burials of those executed during these incidents have been widely reported.  Initial satellite imagery suggests that bodies may have been buried in mass graves during this period, including in Bujumbura (in Kanyosha and Mpanda) and Bubanza. UNIIB received testimony corroborating the existence of mass graves.  Reported intimidation by members of the Imbonerakure and SNR of persons in possession of information on this topic give further credibility to the testimony” (…) “Apparent examples of tit-for-tat targeted assassinations within the Army – particularly threatening to the integration of the armed forces – include the killings of several senior Army officers belonging either to the pre-Arusha Agreement Burundian Armed Forces (ex-FAB) or to the former rebel group “Armed Political Parties and Movements” (ex-PMPA) and the apparent retaliatory killings of alleged supporters of the regime within the forces. Among the most emblematic examples are the killings of General Adolphe Nshimirimana on 2 August 2015; General Karakuza on 25 April 2016; and Colonel Darius Ikurakure on 22 March 2016. The latter was shot dead in the compound of the headquarters of the Army Joint Staff” (…) “In a number of cases documented by UNIIB, the victims were sexually mutilated. For instance, a woman in Cibitoke, in August 2015, was sexually mutilated by Imbonerakure who were searching for her husband. She stated that when they did not find him, they tied her hands behind her back and hit her. “They put their hands inside my vagina until the uterus came out. I was left alone bleeding, screaming. The neighbours came out and they tried to put my uterus back in place.” (UN HRC, P: 7-8 + 10, 2016).

“Arbitrary arrests and detention have been a cornerstone of the repression in Burundi and have opened the way for a wide range of other human rights violations. Arbitrary arrests and detention surged after 26 April 2015, targeting individuals demonstrating against the third term. After the coup attempt of May 2015, the authorities intensified the repression. SNR, PNB, the Imbonerakure and FDN reportedly tracked down opponents, notably through cordon and search operations and raids in so-called opposition neighbourhoods of Bujumbura” (…) “Prison overcrowding is alarming with a 300 per cent occupancy rate in some prisons. The Mpimba prison in Bujumbura, which the UNIIB team visited, was built to house 800 prisoners; instead there were 3,800 detainees present” (…) “Although the Prosecutor General of the Republic has formally denied the existence of unacknowledged places of detention, UNIIB concludes that there are reasonable grounds to believe that the Security Forces and Imbonerakure have established several such sites” (UN HRC, P: 11-12, 2016).

“UNIIB conducted 65 interviews with witnesses and/or victims of torture or ill-treatment. Elements of the SNR, the PNB, the Imbonerakure and, to a lesser extent, the FDN, are consistently identified as the perpetrators, and some individuals, including senior figures of the security apparatus, have been repeatedly cited” (UN HRC, P: 9, 2016). “Independent journalists have been subjected to harassment, death threats, arrests, torture, and the closure of their offices and/or destruction of their equipment” (…) ”As with the other violations in this report the victims are not only those outside Government. There is also no room for dissenting positions within government circles or the ruling party” (UN HRC, P: 14, 2016).

If you don’t see the systemic oppression, harassment and killings of citizens inside here and understand the behaviour of Burundian Government by now, then you’re blind by the arrogance of President Pierre Nkurunziza.

The Burundian Government that has after the banning of UN Experts, has decided to leave the ICC; while the UN Report on Human Rights Violations clearly shows through the process of collecting evidence that the Central Government through their Security Organizations and Youth Party Imbonerakure has violated and oppressed fellow citizens to keep power for their current President. This is why it’s red-hot and been attacked as a political document from the CNDD-FDD as they doesn’t want to hear about their killings and torture to be in charge.

We can just know that this is estimated killings, torture and harassments of citizens, the Central Government of Burundi will never in their mind release the systematic violence against their own citizens to the world. That will only happen when the shadow of this regime is gone. Because they do not want the world know about their misgivings and their acts against their own. Peace.