Archive for the tag “Communist Party”

China: Banning yet another cartoon character! 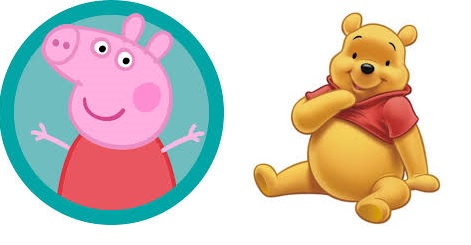 The Chinese authorities are cracking down on more cartoons, because of their messaging. The regime is afraid of their messages. Just like in 2017, when on Chinese Social Media the public was mocking the President with the nickname and pictures of Winnie the Pooh. Xi Jinping doesn’t like jokes and not on his expense. Therefore, during July 2017, Winnie the Pooh was a no-go.

Now the second coming here and this time its the Peppa Pig. But for other reasons. It is not because someone said the pig looks like the wife of the President or anyone in the cabinet. However, the authorities, doesn’t enjoy the message. So we can expect a lot of censorship, to extent we haven’t seen before. Because of Peppa Pig has a wrong message. Most of Disney Channel, Cartoon Network or Looney Tunes can be forgotten in the magic kingdom of China.

Manya Koetse reports: “According to a list of Douyin’s guidelines that have been surfacing online, Peppa is just one amongst various topics and themes banned from the platform. Other types of banned content include those relating to smoking, drinking, cross-dressing, cults or religion, and anything insulting the Chinese government. Over the past few months, Peppa Pig has become a subversive symbol to a Chinese online youth subculture dubbed ‘shehuiren‘ (社会人), literally ‘society people’, which is a group of young adults that is anti-establishment and somewhat ‘punk’ in their own way; going against mainstream values and, as state media outlet Global Times puts it, are “the antithesis of the young generation the Party tries to cultivate.” (Manya Koetse – ‘The Power of Peppa Pig: The Cultural Icon of China’s ‘Shehuiren’ Punks’ 02.05.2018, link: https://www.whatsonweibo.com/the-power-of-peppa-pig-the-cultural-icon-of-chinas-shehuiren-punks/)

So clearly, the message of Peppa Pig is insulting Chinese Government, just like nicknaming Xi Jinping as Winnie the Pooh. Because both of these characters are such firebrand of revolutionary voices. Their striking artifacts of Western-Civilization, that can inspire cults and make dissidents go off the rails. This just show how far the censorship is in China at this point. They are already blocking dozens of pages, news-outlets and social-media pages. Therefore, there are other pages that the Chinese uses, as they are trying to connect as well. However, these are also strictly monitored. If it wasn’t so, than these cartoons wouldn’t be subject of scrutiny.

The Communist party is really afraid of the free voices. Since they cannot manage these cartoons, because of how people are using them. But they are not thinking. That the same people will find other ways and other types of communications. Will find new symbols and the rally for censoring more will go into the ridiculous.

What is next Jessica Rabbit? Donald Duck? Mickey Mouse? Whose up?

Who knows right? But this is just a sign, just another proof of how controlling the media, the social media and the powers of censorship is in the Republic of China. They are not stopping and has no planning to do so. Because they have all the powers of doing so. Peace.

Royally Screwed by the Internet Blockade at the Beijing Airport!

This is released two weeks later, as WordPress themselves blocked my account and forced me to change my password. As I was crossing Asia to the Philippines. Clearly, I had a bad two days technologically speaking on the 22nd and 23rd December. This is now released on the 5th January 2017. As I am sitting in Manila, awaiting getting tickets. Underneath is what I wrote while waiting for my plane in Beijing!

Today, I was for the first time at the International Airport of Beijing. The 22nd December 2017. I am addicted to certain social media pages and services. I need them also to update and be able interact with family and friends. Especially traveling alone across the continents and for over 48 hours. There is a need to update.

As I am traveling. I am struggling to push my words. To express my fond of the airport. Even just say to the world on Facebook, Twitter, WordPress or whatever really. Look into a dozens of Apps. Also, I don’t know how many news-sites that is blocked. However, that is a dozens. I am just in passing by the airport and feeling troubled by it. It must be harder for the people living in the mainland China to use it or they have to VPN to get hooked up on the Social Media sites. There are similar ones in Chinese Fashion. That I am sure is censored and controlled by the Chinese government.

I felt today, the censorship, the blockade and it hurt. The distrust that I couldn’t understand or get the information through these channels. That I couldn’t add or do anything on these pages. Even if it was just saying “I am safe, soon awaiting next flight”. That is to revolutionary for the Reds in Beijing.

I don’t know, but this sort of thing is still to control the media and the message. Not let dissidents or people get information that is unsound and not sanctioned by the Central Government. That is what this is, therefore, the citizens of China are not free in the sense of media or online. They might accept it, but they should know that hurts even the ones that is passing by.

I have stressed fro a few hours, I should have considered it earlier. However, I didn’t. I know I will come with this message of censorship from another Asian Country. Since the Chinese won’t let me share or consider my free opinion on my blog. They have banned from entering. That would be illegal activity. Which in itself is a weird thing. To write and speak out is banned in that fashion. Xi Ping and Communist Party wants to still have the last word. They still wants the minds of the people under their control. If someone questions them. It is wrong. Clearly it is. They shouldn’t be afraid.

They shouldn’t be afraid. Instead of having a bunch of YES MEN. They would have people thinking and making new enterprises, not just copying and licensing. Which they are famous for doing. China deserves that with their great minds and intellect. With their progress and their industrial work. They deserve that, not just imported luxurious goods, but also free minds and free spirits. That can all together create an even better China.

It isn’t dangerous, you can accept to disagree. You can agree. It is up to you. I will not blame you. But I have today tasted the Internet Blockade, the censorship under the Chinese Regime. It is something else.

All I wanted to say to family and friends on Facebook was: “I am safe in Beijing. Awaiting next flight soon”. Something in that fashion. If that is a illegal attempt of inciting violence or causing a stir. Then I don’t know. I just wanted my wife and everyone else to know. That I am cool and collected. Waiting to go to next destination. Peace.