Recently there been reports that yet again the government of Uganda has decided to split a certain numbers of counties into 39 new counties and in the end make the total amount of Member of Parliament (MPs) to 424 (Kisakye, 2015). This can only been seen as a calculated plan to gain more MPs by the government party to reign over this new counties. I will go through who will have to fight for new constituency and votes in newly created counties that the government wishes. This will be after the list that was on the Observer. I will take district after district. An over time I think you’ll see a pattern.

In numbers of the MPs that is on the line and getting new districts to get votes for re-elections in the 2016 elections. This here will be decisive for them. AS you can see that even some district has big birds and people who have been in the wind for a long time like Otafiire from Ruhinda County. But now let me show the numbers: 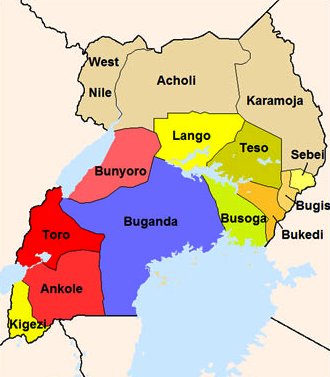 Let me show the areas that are being split not just name of main counties. Since Uganda has been split to smaller and smaller fractions and now is hard to remember where the “original” bigger counties where before they got into the humongous number of 424. So let see here:

If you can quickly see it’s the central regions that have a certain level of changes like in the Ankole, Busoga, Bunyoro and Buganda. The number of counties which is changing in the central/eastern is 17 of 39. Other areas that are also getting a renovation from the government are the Acholi, West Nile and Karamoja which is the Northern parts of Uganda. The total of areas that will be changed is 13 of 39.  Those total 30 of the 39. So it’s easily to see where the main changes are happening. Sometimes in the heartland of the opposition parties than in the Movement territory, so if you think otherwise. Look at the numbers and see even if this is going after 69% of the MPs are NRM. We all know that around Mbale and up north has voted for DP more than NRM in history. FDC is also gaining more grown in eastern, central and western areas. Therefore NRM fearing this, FDC candidate even won in Amuru by-election in November 2014. So that the Government is making a change in the districts around isn’t surprising. But let’s look at the other part of this changes that I haven’t touched on yet. Not the number game, but the real election game.

This strategy is amazing. The way you split counties to reassure and get more loyalty from the new LDC then before. Therefore doing this so close to the election makes the 40 new counties and 40 new MPs. Also open up new constituency and voter’s numbers that need to be secure to get the MP for a county in. Thirdly and last point is that the history of voting in an area get diminish because the new counties. This will lead to smaller counties and need less people to vote the MP in the area. That can be either a gift or a curse. That the counties are getting to be smaller populations so that their easier to manipulate since their no current voting history in this counties. So that the loyalist will get more positions during next elections and also getting new LDCs that will supposedly to give the local community more control and also support the governments work in the areas. Like getting supervision over the primary school and police I guess. But we all know that this is more securing the NRM government more control over the areas and getting the loyal supporters of the Mzee becoming MPs and also making new counties to disfranchise the opposition if possible. That this  areas are also in places where the Independent MPs are coming from and just a few big shots like Kahinda Otafiire. I look forward to see the results from the Presidential General Election of 2016. Hope you do as well in the new counties and see if the MPs from the 9th Parliament will arrive from the new counties.

Just a by the way – on the information flow:

The irony of it all, I couldn’t find the MPs on the Parliaments own site or government official sites online. I found the best by the sites that are targeted by the government. Like the lists from Uganda at Heart had an awesome and amazing list. Second list was from an anti-corruption NGO from Uganda. So the one that isn’t supposed to be friendly with the government is the one that has organized it the best and that is a rare instance. Because a brother expect to easily see who represent them. Taxation with representation, the parliament page of the Ugandan government isn’t sufficient or a page that is really working. Hope that Hostalite and make them a better page indeed. And the Parliament Watch site was ten times better. Where I could double check the result of the General Election of 2011 was from the elected MPs from the Electoral Commission of Uganda. I am grateful that one supposed to be unbiased governmental institution has certain information to the public so I could verify what I found at Uganda at Heart and also the information from Parliamentary Watch. Thanks! Peace.