Despite remarkable achievements in Somalia in the recent past, structural challenges remain and continue to undermine the country’s security and political stability, the United Nations envoy for the country has warned.

DAKAR, Senegal, September 14, 2018 – Briefing the Security Council for the last time in his capacity as UN Special Representative for Somalia, Michael Keating called on all Somalis to draw strength from the positive transformations going on inside the country and work collectively for the common good.

“The future of Somalia is in the hands of the Somalis,” he declared.

“The more [they] show unity, the greater the opportunity, and the responsibility, of international partners to invest in all parts of the country and its leadership,” he said.

In his remarks, Mr. Keating highlighted four key concerns the country’s leaders need to address, and issues that the international community should keep focusing on.

These include the threat posed by the Al Shabaab and other extremist groups; the risk of political differences overshadowing progress in legislative, reform and security areas; fragmentation within the international community; and the danger of a humanitarian “catastrophe”, especially with most of the population already living in precarious circumstances due to climate change and other vulnerabilities.

“Future crises will result from the combination of climate related shocks; armed conflict provoked by Al Shabaab and unresolved grievances; competition over natural resources; and systemic marginalization of certain groups,” warned Mr. Keating. He underscored the need to reduce the vulnerability faced by ordinary Somalis, through job creation and smart investments that safeguard natural resources and help unlock the enormous economic potential of the country.

Besides political will, Mr. Keating underscored, success will depend on leaders from the political, business and traditional spheres “working together for the common good, leveraging the country’s potential wealth to transform prospects for people – especially the young.”

On 1 October, Nicholas Haysom will replace Mr. Keating as the Special Representative of the Secretary-General for Somalia and the head of UNSOM. Mr. Keating was appointed the top UN official in the Horn of Africa nation in November 2015.

Alongside Mr. Keating, Phumzile Mlambo-Ngcuka, the Executive Director of the UN gender equality and empowerment agency for women and girls (UN Women) highlighted the “once-in-a-generation opportunity” that Somalia currently has to establish lasting peace, and gender equality.

She commended the nation for improving representation of women in public office, illustrated by the “jump” in women’s representation in parliamentary elections from 14 to nearly 25 per cent of seats in the most recent elections.

This progress, she underscored, has brought many “important voices” to Somali politics.

She said it had brought to the centre “the fight to end child marriage, end female genital mutilation (FGM), and change laws that discriminate against women,” noting that the participation of women will be further boosted if more leaders, especially clan leaders, embrace gender equality and support women.

She also called on the international community and the Security Council to support Somalia’s federal and provincial authorities, advance gender equality, act strongly against sexual and gender-based violence, advocate for meaningful participation and recognition of women in all sectors, and support women’s groups in the country.

“Women’s organizations in Somalia are organized. They are dedicated to their country: they are activists, advocates, entrepreneurs, professionals, and patriots,” said Ms. Mlambo-Ngcuka, noting that as the country prepares to confront the challenges in the days ahead, “women will make the difference.”

Considering that the peoples of Ethiopia, Somalia and Eritrea share close ties of geography, history, culture and religion as well as vital common interests;

Desiring to bolster their historical ties to achieve their lofty objectives;

The Governments of Ethiopia, Somalia and Eritrea have reached the following agreement that reflects the aspirations of their peoples:-

1. The three countries shall foster comprehensive cooperation that advances the goals of their peoples.

3. The three countries shall work in coordination to promote regional peace and security.

4. The three governments hereby establish a Joint High-Level Committee to coordinate their efforts in the framework of this Joint Declaration.

For the Federal Democratic Republic of Ethiopia

For the Federal Republic of Somalia

For the State of Eritrea 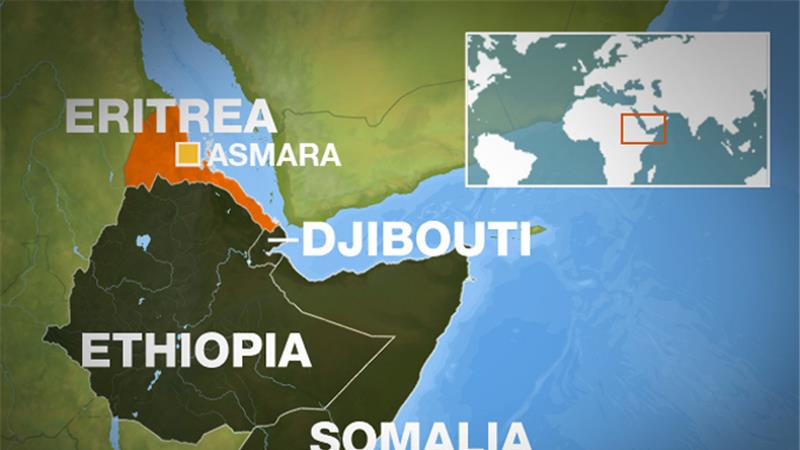 MOGADISHU, Somalia, September 5, 2018 – Mogadishu 5th September 2018; The president of the Federal Republic of Somalia Mohamed Abdullahi Farmajo is leading efforts to consolidate gains made at the Forum on China-Africa Cooperation by facilitating the prospect of a tripartite agreement on economic Integration between the countries of the Horn.

President Farmajo, Ethiopian Prime Minister Abiy Ahmed and Eritrea’s President Isaias Afwerki are scheduled to meet in Asmara on 6th and 7th September to hold discussions on strengthening the economic and security stability of the region.

The leaders would also discuss measures to end all political and social conflicts between the countries of the horn to promote harmony and a happy coexistence between neighbors of the horn.

President Farmajo’s vision is to promote free trade flow, and a mutual economic cooperation between all the countries of the Horn of Africa.

Somalia seeks to play a key role in economic and social integration of the Horn of Africa to foster trade and investment, and to improve connectivity between the people and businesses of the Horn.

In Beijing, Somalia signed the Belt and Road Initiative that enhances connectivity and promotes economic development, and an agreement on improving Economic and Technical Cooperation between China and Somalia.

Somalia’s ambition to take the lead in facilitating a robust Horn of Africa trade bloc would foster stronger economic stability and development for the Horn nations.

NORTHWOOD, United Kingdom, July 26, 2018 – Deterrence, repression and prevention of piracy begins with the identification of the threat. EU NAVFOR has been making use of Spanish Maritime Patrol Reconnaissance Aircraft (MPRA) for nearly 10 years with 1000 missions and more than 10,000 hours flown to keep a watch from the skies.

The Spanish MPRA Detachment in Djibouti has recently reached the major milestone of 1000 missions during their commitment to Operation Atalanta since December 2008.

The highly capable Orion P-3C can operate either alone or in coordination with other assets including EU NAVFOR’s helicopters and warships. It can use its inherent flexibility, speed, reach, and response time, to assist maritime vessels under pirate attack. Both Spain and Germany have deployed MPRAs to the Somali coast since the start of Operation Atalanta. The expertise gained by their respective crews is a key factor contributing to the success of the EU NAVFOR Operation.

Since the beginning of the operation, MPRA’s have been key elements in the fight against piracy in the waters of the Indian Ocean. Collaborating with the Naval Units of EU NAVFOR Somalia and other Djibouti based MPRA’s (operating with CTF151) provides stability and security to the ships that pass through the zone. 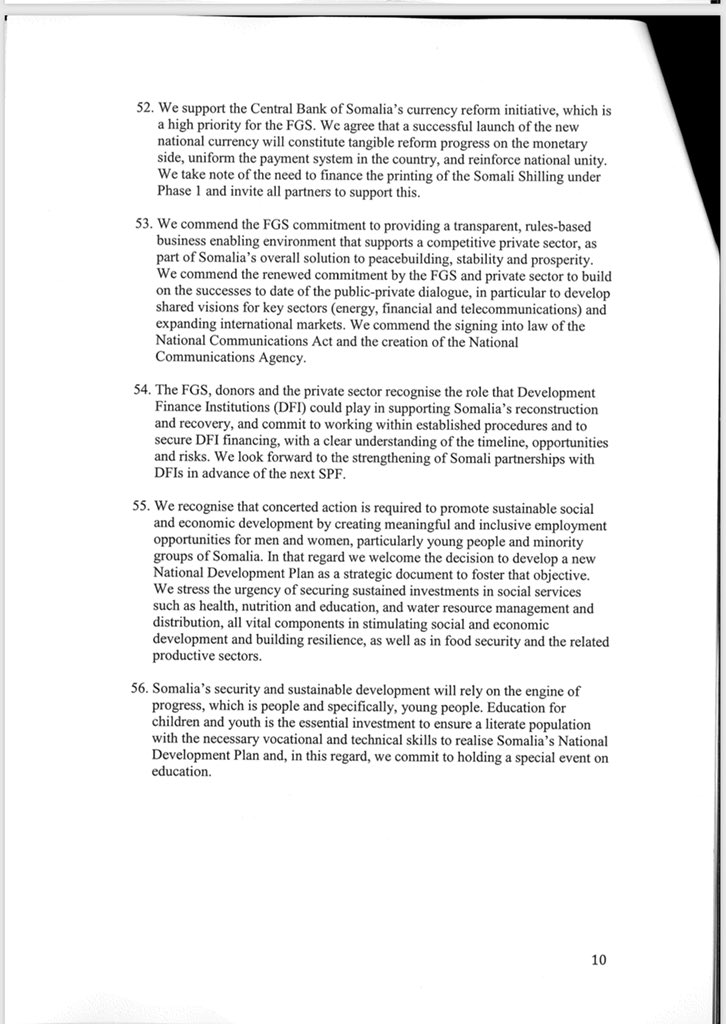 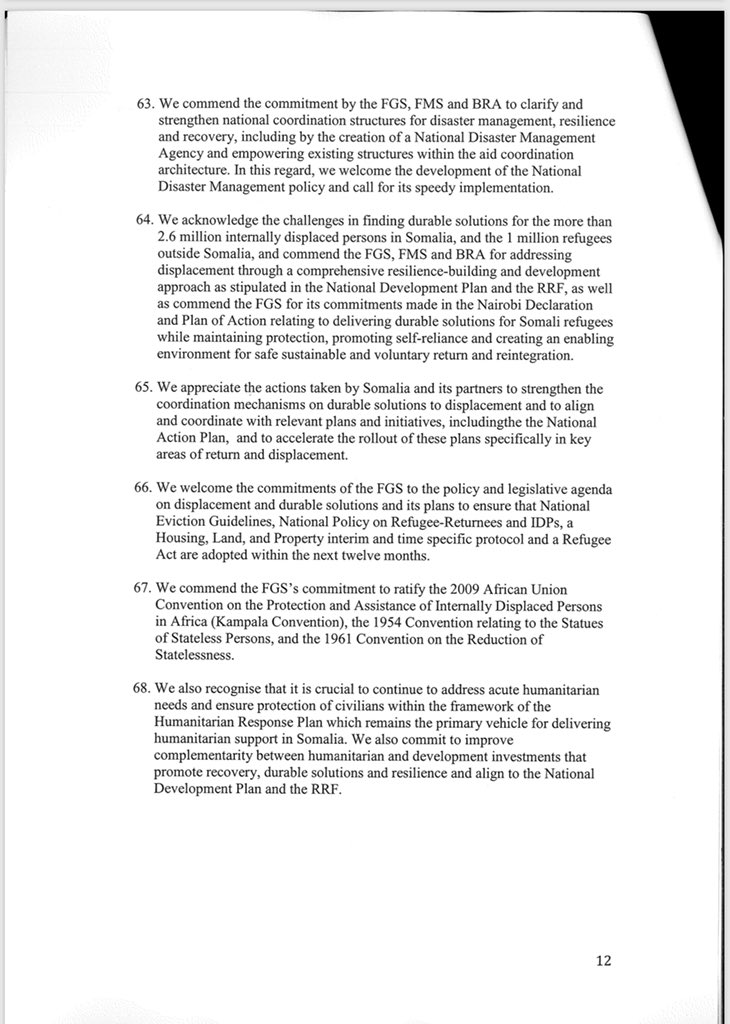 UN Under-Secretary-General for Political Affairs Rosemary DiCarlo praised Somalia’s leadership for the steps it has taken in developing a political roadmap for inclusive politics.

BRUSSELS, Belgium, July 17, 2018 – Speaking at the first day of the Somalia Partnership Forum in Brussels on Monday, senior United Nations officials commended the country’s government for its efforts in political reform, security, economic development, and recovery and humanitarian assistance – while flagging the need for further progress and international support for these efforts.

UN Under-Secretary-General for Political Affairs Rosemary DiCarlo praised Somalia’s leadership for the steps it has taken in developing a political roadmap for inclusive politics, especially with regard to preparations leading to the ‘one person, one vote’ elections in 2020-2021, and advances in its constitutional review process.

“The Federal Government of Somalia would need to continue its efforts in building constructive relations with all those who would benefit from its leadership: the federal Parliament, Federal Member States, political groups and civil society,” said Ms. DiCarlo.

“This will ultimately help to stabilize the political environment, achieve further progress and strengthen Somalia’s resilience against pressures that risk undermining its unity,” she added.

The Horn of Africa country is facing a range of political, developmental, security and humanitarian challenges as it rebuilds after decades of armed conflict and climate-related shocks.

Taking place in the Belgian capital, the two-day Forum also spotlighted the importance of supporting a nationally-owned and led reconciliation processes.

Ms. DiCarlo noted that further progress is needed to strengthen the constitutional, legal and institutional foundations of the Somali Federal State, including allocation of powers and resource sharing.

“Despite the challenges that may arise, it is critical that these processes are conducted in an inclusive, consensual manner to ensure ownership by the Somali people,” she said, adding that the UN is committed to advancing inclusive politics in Somalia.

“We are providing technical, financial and logistical support, and we strongly support nationally-owned and -led reconciliation processes, including the national reconciliation framework,” Ms. DiCarlo concluded.

In his remarks, UN Secretary-General’s Special Representative for Somalia Michael Keating encouraged the international community to “keep Somalia on the agenda,” and noted that the inclusive approach in Somali politics needs to be extended to building national security in an effort to build trust.

“I cannot commend the Government enough for its commitment to a genuinely holistic approach, to recognizing that it is not only about military and operations, it’s also about building institutions, rule of law, accountable local governance, reconciliation and countering violent extremism,” he said.